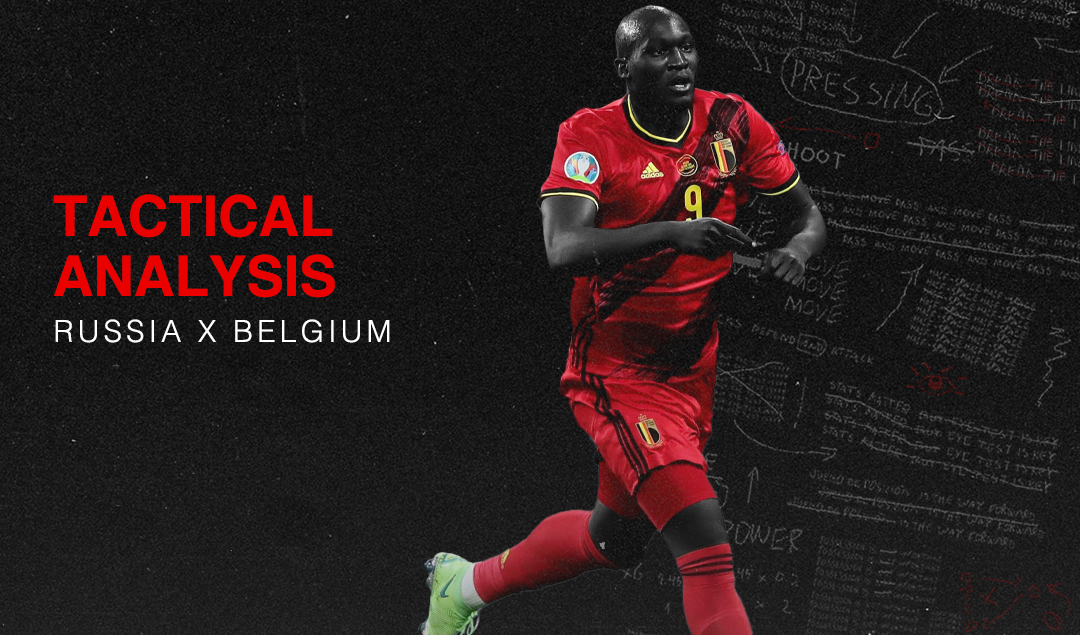 The Saint Petersburg Stadium was around half-capacity as Russians gathered to watch their nation take on the world number one in their Euro 2020 opener. The two sides took the same path in qualifying for the tournament, being pitted in Group I in the qualification stage for the tournament. Belgium swept the Russians aside comfortably in both encounters during qualifying.

It was an all too similar story for Belgium as it took just ten minutes to kickstart their Euro 2020 campaign. Dries Mertens’ cross in from the right looked to be an easy one to handle for Russia’s backline, but Andrei Semenov’s mess of a clearance bounced straight to Romelu Lukaku. The Inter Milan striker guided the ball past Anton Shunin to make it 1-0.

Russia’s best chance of the game came just four minutes after going a goal behind. Aleksandr Golovin’s corner was met by Mario Fernandes, who couldn’t direct his header either side of Thibaut Courtois, making it all too comfortable for the Belgian goalkeeper. Belgium came close to punishing Russia for their missed opportunity in the 24th minute. Romelu Lukaku continued his bullying of Russia’s back line, gathering the ball near the half-way line and leaving defenders in his wake, before Fernandes’ last-ditch challenge thwarted the striker’s effort.

A scary moment highlighted the first half as Timothy Castagne and Daler Kushyaev clashed heads in the middle of the park. The two received medical treatment before being replaced by Thomas Meunier and Denis Cheryshev respectively. Belgium saw their lead doubled ten minutes before the break thanks to their first-half substitute. Thorgan Hazard’s delightful cross was missed by everyone and forced Shunin to push the ball into a dangerous area, where Meunier was waiting to pass the ball into the bottom corner.

A 2-0 lead going into halftime saw Belgium come out for the second period with a sense of comfortability. Russia rarely threatened the Belgian backline, leaving Artem Dzyuba often isolated and frustrated. Belgium wrapped up the three points late on thanks to their talisman striker yet again. A through ball for Lukaku saw the 28-year old cooly finish at the near post for his second of the game, his team’s third.

Man of the Match: Romelu Lukaku

The Inter Milan striker came into the Euros fresh off an impressive side for the Italian champions and continued his hot-form with two well taken goals. A constant threat throughout the game against Russia, Lukaku was everywhere on the pitch. The striker made sure to punish a Russian error in the first half and a calm finish in the second half made him the obvious name for Man of the Match.

Lukaku constantly kept Russia on their toes, physically imposing himself against defenders while excellently linking the play with Yannick Carrasco, Dries Mertens and Thorgan Hazard just behind him.  It was a complete performance from the 28-year old and one worthy of dedicating to a friend.

The reigning Serie A champion spoke after the game, dedicating his performance to his club teammate Christian Eriksen, who collapsed suddenly in Denmark’s tournament opener earlier in the day. He visibly dedicated his first goal, saying “Chris. I love you” into the camera, before honoring his teammate post-game. 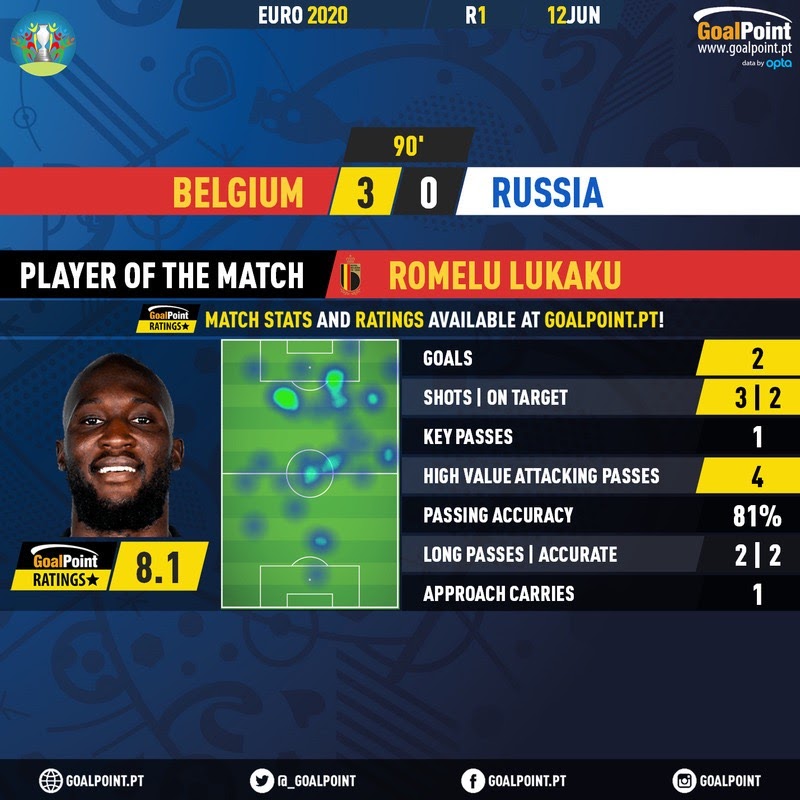 Once again, Romelu Lukaku proved why he is one of the finest strikers in Europe with an excellent display against the 2018 World Cup hosts.

The 3-0 victory puts Belgium in a very comfortable position going into the second game of the group against Denmark. Roberto Martinez’s side cruised from the opening whistle, despite missing key players such as Eden Hazard, Kevin De Bruyne and Axel Witsel.

Two early tournament goals from Romelu Lukaku will spark the striker to keep his good form going, something Belgium will need to progress far this summer. It’s an excellent start for the Red Devils, who will look to continue their upward trajectory.

It was a dismal start to the tournament for Russia, who struggled to threaten throughout the 90 minutes and will need to improve against Finland on matchday 2. Their midweek matchup against Finland is a far more manageable task, once again being played in St. Petersburg, but stars Aleksandr Golovin and Artem Dzyuba will need to vastly improve in a must-win game.

With the top four third-place teams qualifying for the knockout stages, Russia will look to bounce back against Finland, who won their opener earlier in the day against Denmark. Meanwhile, Belgium will be more than content with three points and a nice goal-differential to begin the tournament.

Roberto Martinez’s archetypal 3-4-3 system and personnel seemed to overrun Russia’s relatively lacklustre and heavy legged midfield which inevitably gave the Red Devils the keys to success at the Krestovsky Stadium, St Petersburg. Youri Tielemans’ outstanding performance in central midfield was instrumental in victory, dictating play and ensuring the domination of Belgium in the midfield.

With over 107 touches and 85.6% pass accuracy, Magomed Ozdoev and Dmitri Barinov were overrun by the clever and intricate play from the Leicester City midfielder. Moreover whilst the Belgians had dominated the ball with over 67% possession, Martinez’s style was aided by the game-changing error from an ill-focused Andrei Semenov whose misjudgment allowed Romelu Lukaku – one of Europe’s hottest strikers with an opportunity of ease which was tucked away simply in just the 10th minute.

Semenov’s mistake typified Russia’s night; lack of energy and intensity that could be summed up by their sole effort on target, which was an honest attempt from the nation’s stand-out performer Mario Fernandes. Fernandes’ willing runs on the right flank stood out as a key outlet for the Russians going forward, however fluidity in the final third was missing severely.

This is very alarming considering how the Russians were playing in front of over 26,000 mainly home fans in Saint Petersburg. In contrast to this, Romelu Lukaku’s presence, power and finesse saw him finish coolly past Anton Shunin who had a mediocre match conceding 3 of the 4 shots that were on target. 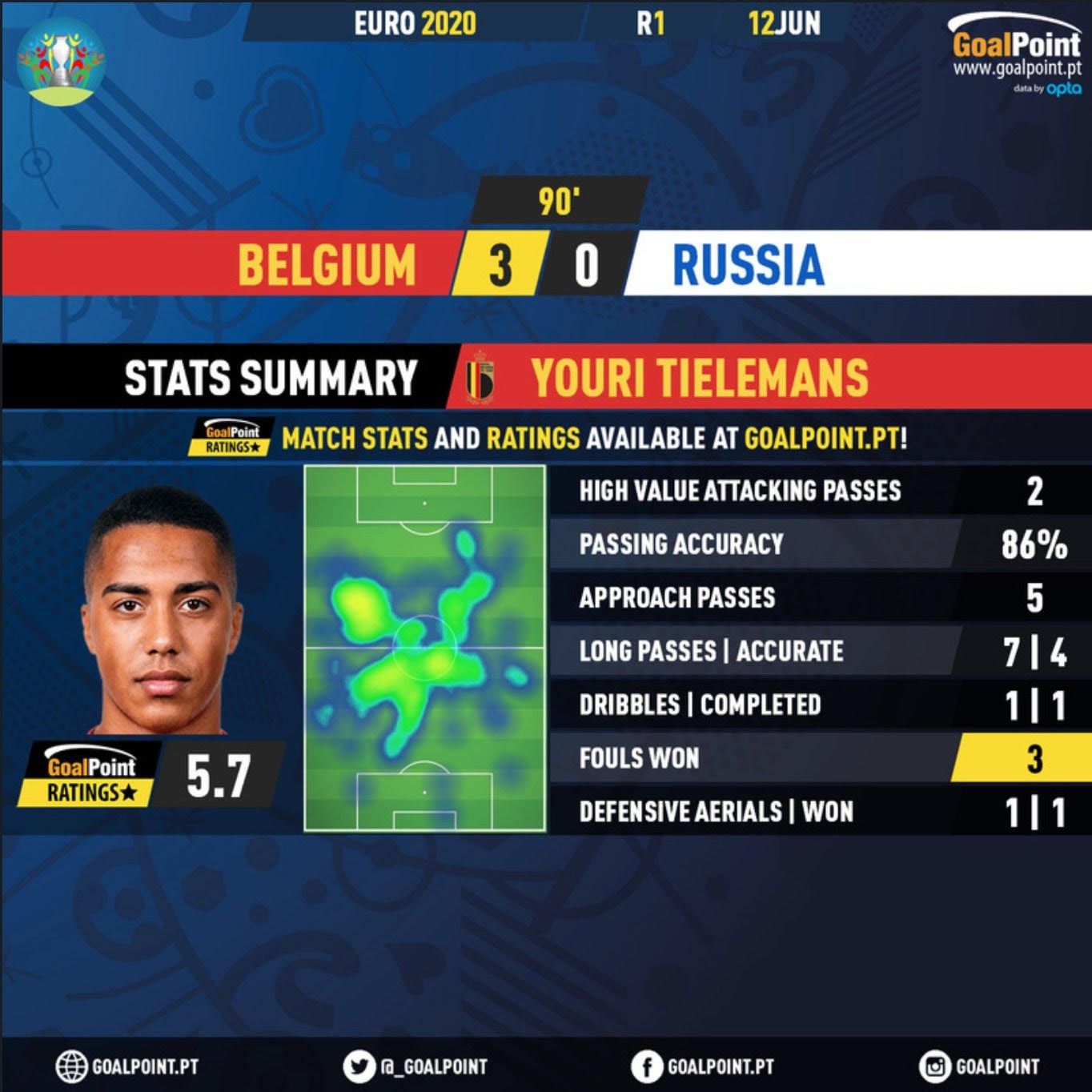 Continuing on his stellar campaign in Leicester City, Youri Tielemans bossed proceedings from start to finish in Saint Petersburg.

Whilst Youri Tielemans and Romelu Lukaku and a dominant Belgian side kept the headlines of the evening, Russian hopes were placed on Monaco starlet Aleksandr Golovin who had a very underwhelming match.

Russia’s pass accuracy and creativity for many rested on the shoulders of Golovin, but his lack of effectiveness between the lines made the link up play with Artem Dzyuba strained and disjointed – with just 73% pass accuracy, this summed up the lack of communication and efficiency from the Russians. As seen on the heat map, Golovin’s presence found himself predominantly on the left side of midfield rather than a number 10 supplying assists and dangerous passes for the striker..

In replacement of Golovin a key player for the Russians was Mario Fernandes, who found himself taking up good positions and causing some trouble for Thorgan Hazard and Jan Vethongen when using the right flank. Fernandes’ performance showcased a possible outlet in future matches that the Russians could use as a useful tool going forward.

Fernandes’ attempt on goal being the only attempt on target from the Russians summed up their lacklustre night in front of their home fans at the Krestovsky Stadium. After the quarterfinals of the World Cup in 2018, Russian fans will blissfully forget the lethargic effort from their team witnessed against the Belgian Red Devils, who in every department, showed how they are still a force to be reckoned with and should not be taken lightly this year. 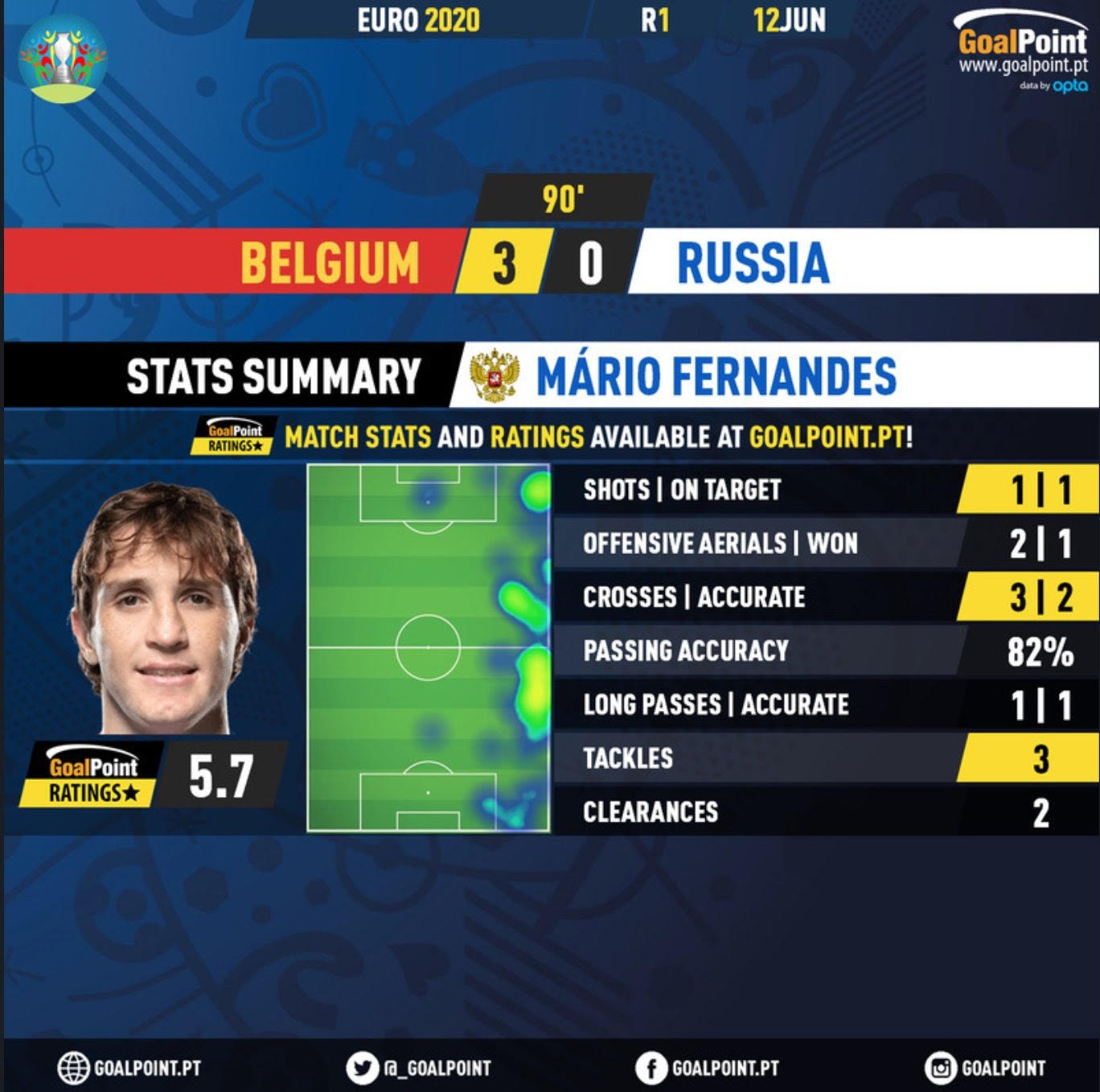 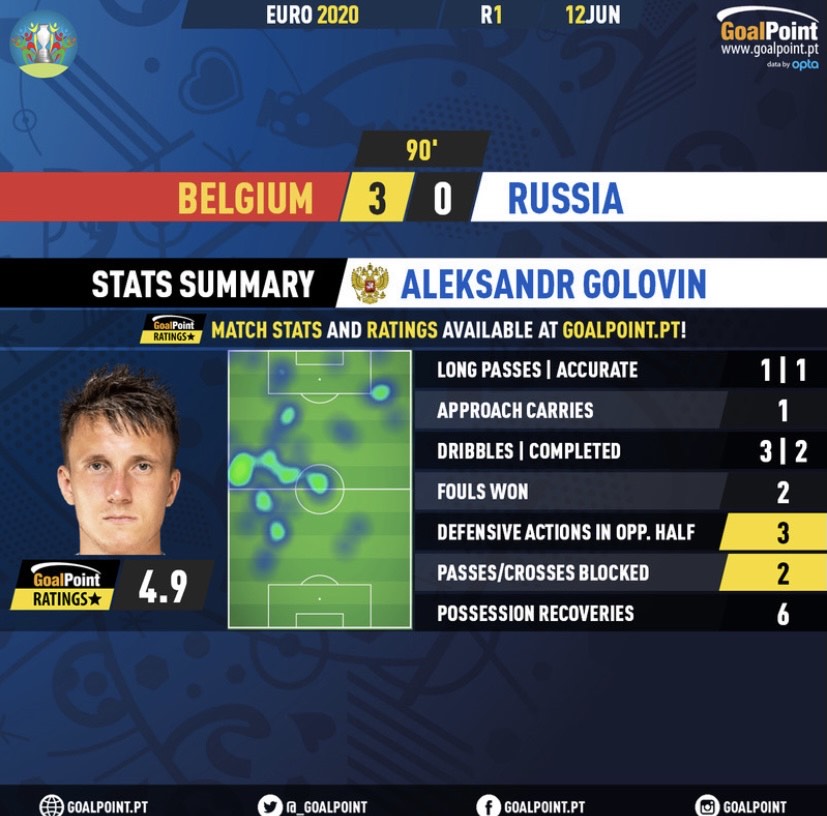 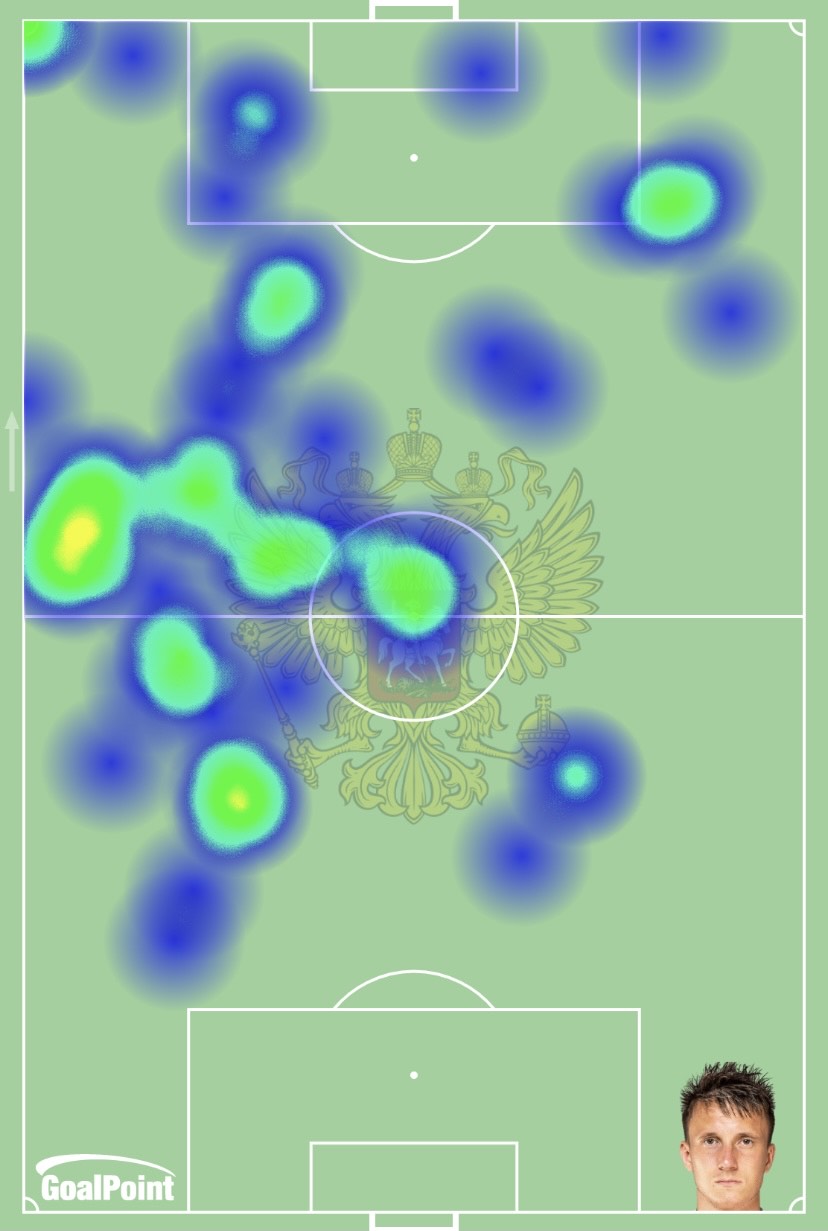 Whereas Aleksandr Golovin struggled to get a grip on the game, the Brazil-born Mário Fernandes was one of Sbornaya’s bright spots.