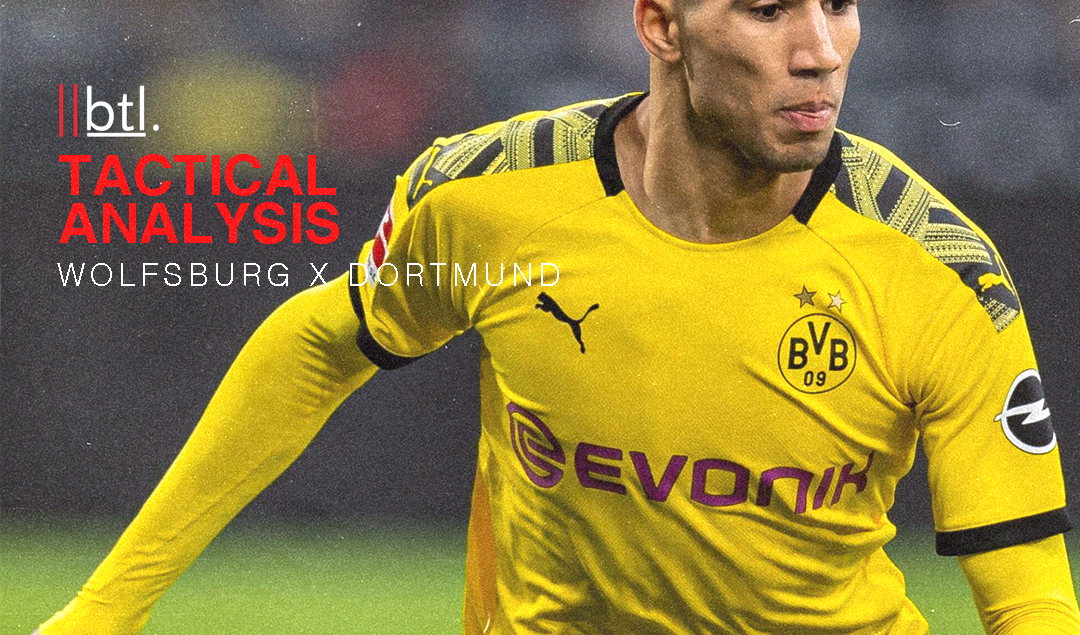 In what was VFL’s Wolfsburg’s first home match behind closed doors, title challengers Borussia Dortmund came to town and secured their sixth consecutive Bundesliga victory. Lucien Favre’s side are now in a perfect position going into Tuesday’s Der Klassiker, but to say this was a dominant victory for the Swiss would be too harsh on his opposite number Oliver Glasner.

Instead, it was the efficiency and experience of Borussia Dortmund that led them to an eventual 2-0 victory, allowing them to maintain pressure on league leaders Bayern Munich.

Due to an injury picked up by left-back Paulo Otávio, who had a great game in Wolfsburg’s 2-1 victory at Augsburg last weekend, Glasner was forced to bring in the out of form Jérôme Roussillon. He also started Daniel Ginczek, as opposed to Josip Brekalo, for tactical reasons.

By going with a target man in Ginczek over a quick winger in Josip Brekalo, Wolfsburg switched from last weekend’s 4-2-3-1 to a 4-4-2. Admir Mehmedi, who operated as a second striker behind João Victor against Augsburg, was forced to play wider, but his role remained somewhat similar.

In this 4-4-2, Glasner used two inverted wingers (Mehmedi and Renato Steffen) in order to create space on the flanks for two overlapping full-backs (Roussillon and Kevin Mbabu).

“Never change a winning team“ may very well have been Favre’s pre-game motto going into the Volkswagen Arena. Emre Can, Axel Witsel and Jadon Sancho, having just returned from slight injuries, were deemed physically unfit to start, and thus Thomas Delaney, Mahmoud Dahoud and Thorgan Hazard all kept their places from last week’s 4-0 Revierderby win.

Repeating last weekend’s winning formula, Dortmund lined up in a 3-4-2-1 with Raphaël Guerreiro acting as an inverted wing-back and Julian Brandt as a ‘false‘ #10. These respective roles were significant in shaping Dortmund’s overall tactical approach.

One of Borussia Dortmund’s weaknesses is their lack of concentration in aerial situations — particularly by Manuel Akanji — and with tools like Wout Weghorst (197cm) and the aforementioned Ginczek (191cm), it only made sense for Glasner to target this vulnerability.

In Mehmedi and Steffen, Glasner had two wingers capable of crossing from the edge of the box, and who could also tuck in to create space for their overlapping full-backs, Roussillon and Mbabu, to deliver from the outside.

(Wolfsburg right back Mbabu lines up a cross. In the middle, Wolfsburg’s strikers Weghorst and Ginczek are waiting to connect on the cross).

But despite delivering 18 crosses, Glasner’s side failed to provide a real threat for goalkeeper Roman Burki. Dortmund’s man-marking from set-pieces was effective and well-drilled, and their defending inside the box during open play showed a collective focus and maturity that has been sorely missed at times during this season.

(Dortmund’s 1v1 defending from set-pieces was effective, with Favre’s side keeping a clean sheet despite Wolfsburg’s aerial threat).

Dortmund’s gameplan wasn’t necessarily moulded around Wolfsburg’s tactics, but they did adjust slightly in order to target some of their opponent’s weaknesses.

A typical ‘Borussia Dortmund-goal’ is as follows. Their false #10 (usually Sancho) receives the ball in between the lines before finding wing-back Achraf Hakimi high on the right flank. Hakimi will then send a low cross into the box where, usually, Erling Haaland has created separation from his man and scores.

(Dortmund’s favorite way of scoring is displayed here in a 3-0 home win against Eintracht Frankfurt. Their false #10, in this case Sancho, receives the ball in the right half-space before finding Hakimi in an advanced position on the right flank. Hakimi delivers a cross for Haaland to convert)

The original pass to Dortmund’s false #10 leaves the opposition in a difficult predicament. Should they pressure Sancho, Brandt or Hazard and restrict his space, one of the fastest players in world football, Achraf Hakimi, will run in behind. Should they leave Sancho, Brandt or Hazard unmarked, they leave themselves exposed to some of the Bundesliga’s most dangerous attacking talents.

But a personnel issue made this an even more dire situation for Wolfsburg. Roussillon has an outstanding impact on the attack at times, but he is a worse defensive player than Paulo Otávio.

Dortmund looked to create a numerical advantage in Roussillon’s area and expose his suspect defensive abilities with their most dangerous attacking players.

49% of Dortmund’s attacks came from the right flank (WhoScored).

Despite starting the match on the left flank, Brandt and Guerreiro would also drift over to the right side and create a numerical overload. Brandt would position himself in the half-spaces, close to the ball, and this often forced one of Wolfsburg’s strikers (usually Weghorst) to track back and cover.

With Weghorst deep, Wolfsburg had one less direct outlet if they succeeded in winning back the ball.

Dortmund opened the scoring in the 32nd minute through Guerreiro, who continued his excellent attacking form after last weekend’s brace against Schalke. Let’s take a look at how the goal was manufactured.

(Dortmund’s attacking patterns rely on automatisms, where each player knows where to make his run)

Brandt receives the ball out wide and makes a quick turn, before passing to the underlapping Hakimi. At the same time, Hazard makes a run on Wolfsburg defender John Brooks’s blindside, and prepares to receive the follow-up pass from Hakimi.

(Hakimi receives the ball in the right half-space and passes it to Hazard, who’s unmarked and in the best position to cross the ball into the centre).

Hakimi receives the ball from Brandt in the right half-space before finding Hazard on his outside. Hazard’s first time ball is missed by Haaland, who draws the attention of two men and allows Guerreiro to pick up the pieces and finish at the back post.

(Haaland has the attention of everyone in the box and forces Wolfsburg’s defenders to leave the back post unguarded).

Dortmund’s Stranglehold on Possession in the First Half

In the first half, Borussia Dortmund recorded 66% possession and didn’t allow Wolfsburg a foothold on the game. This doesn’t mean that Dortmund totally dominated, but that they stayed calm and looked for combinations when low-risk opportunities arose.

Brandt in particular would position himself deep during the build-up. The German is one of the Bundesliga’s most creative, dynamic players with the ball at his feet, and can evade pressing lines with smart touches and feints.

(Brandt drops deep to provide an additional passing option for Akanji. Brandt’s quality in tight spaces allows him to get the ball to Guerreiro, who is a free man on the left flank).

In this first half, Dortmund opted for an aggressive counter-press when they lost the ball on the flanks. They were able to shut off all passing options fairly quickly, using the touchline as an extra defender.

(Hazard loses the ball in the final third and directly presses Wolfsburg’s left-back. Short passing options are restricted by Hakimi, Delaney and Haaland).

At the start of the second half, Borussia Dortmund moved into a more permanent 5-4-1 shape. Mats Hummels was substituted at half-time in favour of Can, while Sancho replaced Brandt on 65 minutes.

After halftime, Wolfsburg had much more of the ball and Haaland worked hard to ensure that right-sided centre back Marin Pongračić would have a minimal role in the build-up. This forced Brooks to play the ball wide, where Dortmund could set up pressing traps and force a loose ball into the middle of the pitch.

(Dortmund lying deep in their 5-4-1 block and forcing Wolfsburg to fire into the crowded centre).

In the 78th minute, Dortmund’s other wing-back, Hakimi, added a second goal after a recovery from Delaney in the centre of the pitch, which sparked a quick counter attack. Haaland received the ball at his feet, while Sancho and Hakimi sprinted forward, ready to receive the ball high and in space.

After receiving a pass from Dahoud, Sancho carried the ball high up the pitch, with Hakimi trailing on the outside. Haaland used his pace to join the attack and smartly positioned himself in between two defenders, inviting Sancho to slot in Hakimi for a simple finish.

Man of the Match: Thomas Delaney

Thomas Delaney was Dortmund’s most important player on Saturday, a dominant leader in the centre of the park and one that proved a nuisance for Wolfsburg’s midfielders all game. The Dane’s aggressive defensive work restricted the impact of Xaver Schlager and Maxmillian Arnold, with the latter eventually dropping in between the centre-backs to avoid him.

(Delaney chases Schlager, who has evaded Dortmund’s initial press and is approaching the final third).

His importance to the team’s pressing and transition defence, as well as the attack, led Borussia Dortmund to announce Delaney as their man of the match.

(Delaney filled up the stats column against Wolfsburg)

Dortmund never looked in real danger of dropping points against Wolfsburg, a testament to their improvement in the second half of this Bundesliga season. While Favre’s side has always had the individual quality to win tricky away games, their consistency and strength of character over the course of the Rückrunde has to be highlighted.

Wolfsburg, on the other hand, were timid and weak, and after Felix Klaus’ 82nd minute dismissal, they were stripped of any opportunity to spark a late comeback.

It doesn’t get much easier for them tomorrow night, with a trip to in-form Bayer Leverkusen, but all eyes will be on Borussia Dortmund’s monster clash with Bayern Munich at Signal Iduna Park. BVB are a much stronger side than they were when the league leaders thrashed them 4-0 earlier in November, and can keep the title race alive with a victory.