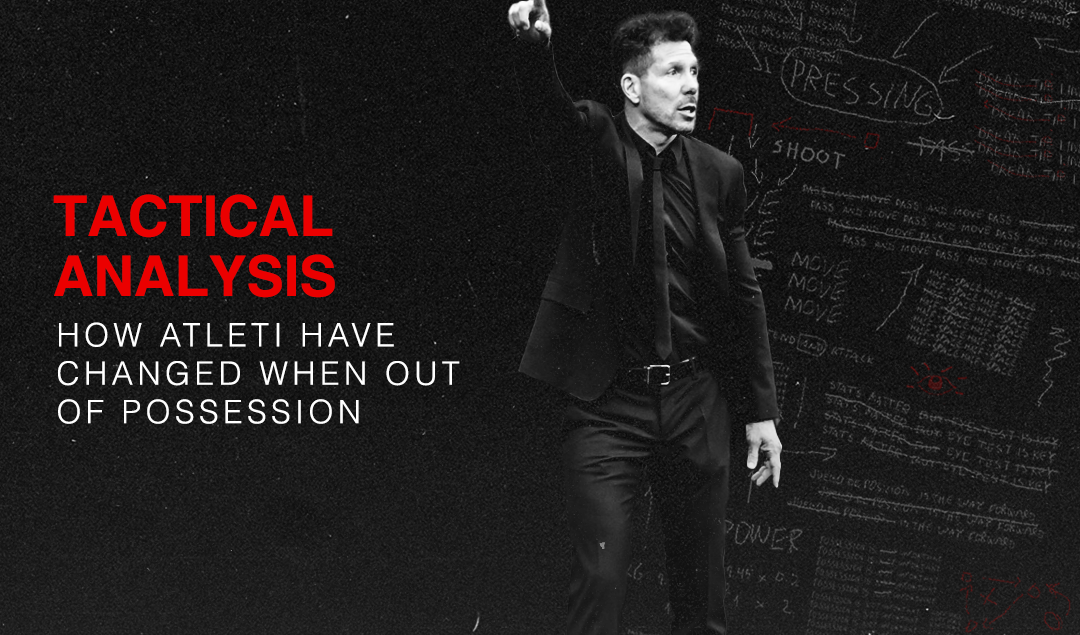 When you think of Atlético de Madrid’s playing style, you immediately think of a strictly defensive team that plays direct football and exploits counter-attacks. You get a flashback of the 2013/14 season where most of the games they would start winning and then defend in a low block 4-4-2 for the rest of the game.

The Secret to Atletico Madrid’s Success: Balance and Adapting to Luis Suárez

Well, that might be true for the past seasons, but this season, Diego Simeone has evolved. They still maintain their defensive solidness but now they prefer to have more possession and play more attacking football. Simeone has had many years to analyse the defensive advantages to using the 4-4-2, but he must have seen something in their defence last year that he did not like. I say this because this season he has completely changed their defensive positioning.

In this analysis, we will see how Atlético has changed the way they defend. We will see how they have managed to only concede 14 goals in the league this season, the lowest in La Liga.

It was very surprising to see Atlético transition into a 5-3-2 when defending. These past years they have defended in a 4-4-2 but Simeone has now decided to add another defender. Let’s see how they change into this shape during the game.

The difference between both formations is that you move a player from the midfield and add him to the defensive line. The interesting thing is that Atlético are starting games with the same type of players they would if they played in a 4-4-2. The only change they are making is that one of the wide midfielders drops to become a wing-back and the full-back that is on their side then becomes a “new” centre-back.

For clarification purposes, here is an example. The ball is on the right side of the pitch and Koke has come to this side to help out the wing-back so that he is not in a 2vs1 situation. Koke is one of the three midfielders who has had to shift over in order to help out.

When they are in the 5-3-2, Correa will now have the role of strengthening the defence on the right side. Meanwhile, the other wide midfielder will now join the two central midfielders to form a midfield of 3. His role will be to protect the middle and shift over to his side if the opponents are attacking through there. 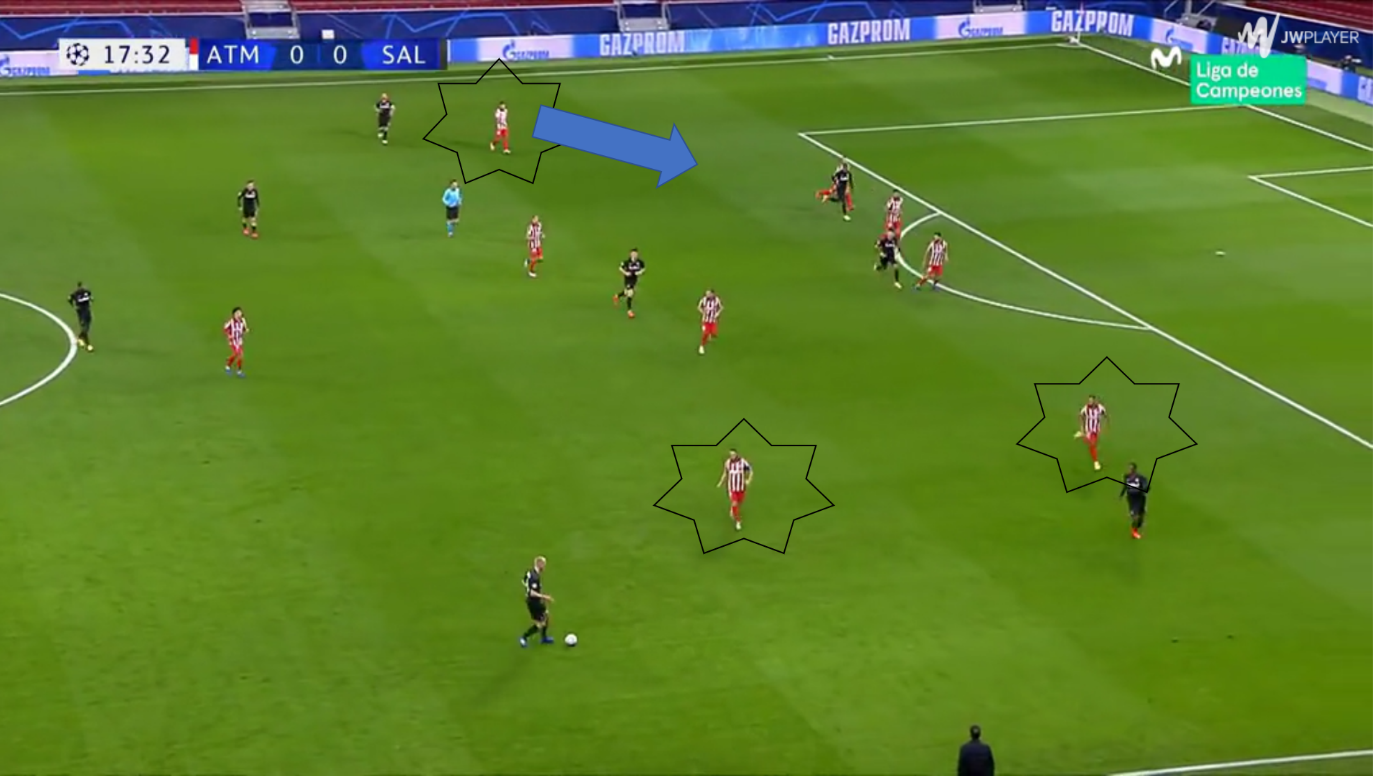 So what does changing to a 5-3-2 provide to the team defensively? First of all, it strengthens the middle as they now have 3 players there, compared to 2 players when they used the 4-4-2. By having 3 players there, they can protect the passes in between lines better which is important because these are usually the most dangerous passes.

For example, in the image shown below, Atlético’s central midfielder is following the player who is trying to get behind the midfield line. This provides Atlético more flexibility when protecting the passes through the middle because before, it usually had to be the centre-backs who came up when a pass was made in between the lines.

With the centre-backs jumping up to pressure the man in between the lines, it created space behind them that could be exploited by the opponents. Therefore, with this new formation, they have improved their solidity in the central lane. 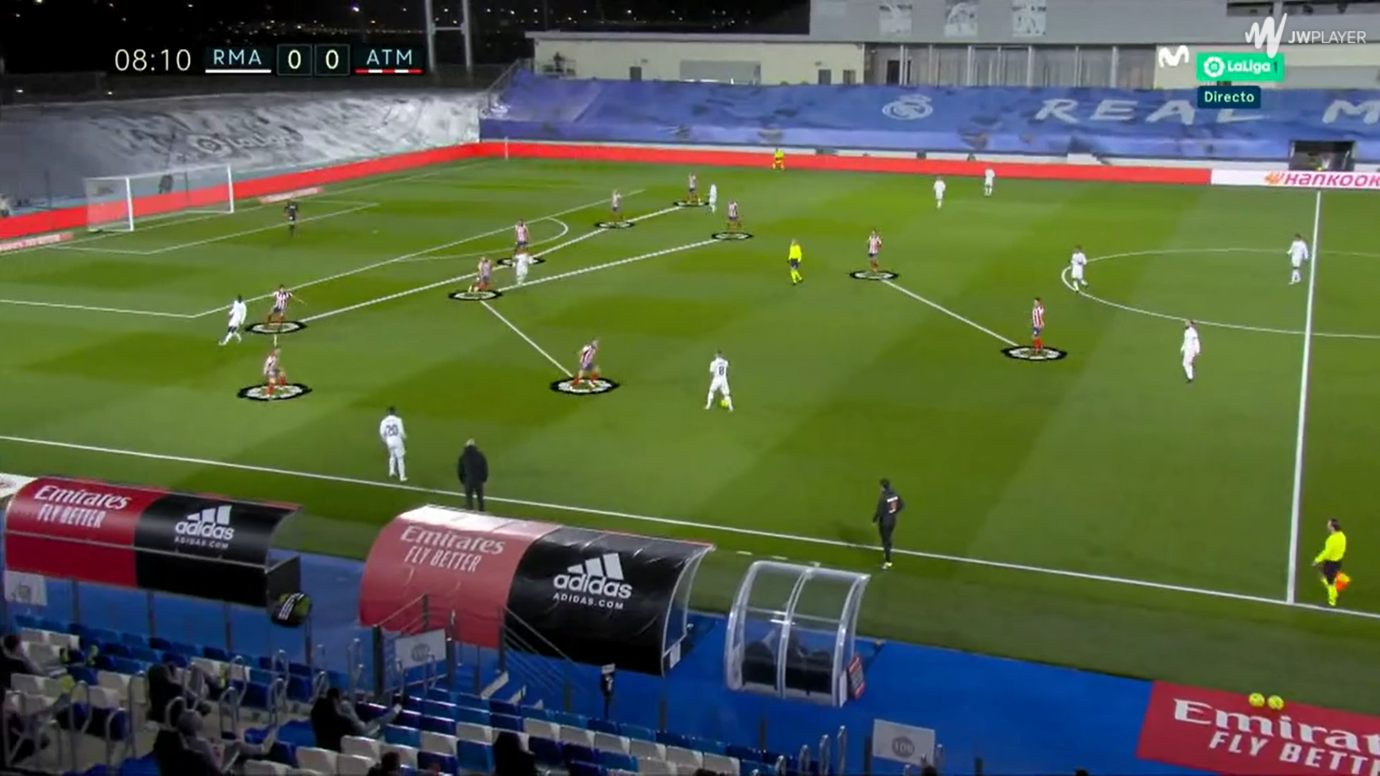 If a midfield player cannot get to an opponent who is in a threatening position near the defensive line, it is still one of the defenders who comes up. This is another reason why Simeone has switched to this new formation and it is because if a defender goes out of their position to put pressure on a player, they have more cover behind them.

Coming up to pressure the opponents near the defensive line is important because if no midfield player can get to him, he would have time and space to create danger. If a defender pressures him, he will not be able to turn around with the ball if he is receiving with his back towards the goal. This is important because most passes in between lines are made with the opponent player not facing the goal. Therefore, disabling that player to turn is essential.

Before when a centre-back came up to pressure, there were only 2 players capable of protecting the space left behind. However, now there is one additional player who can help cover the space. For example, in the image below we see how there is no Atlético midfielder close to the opponent on the ball. Therefore, it is Kieran Trippier who has to step up. We can see that the receiving player is not facing the goal and so Trippier makes sure it stays this way. If it works well, it is a great asset but there are disadvantages to this tactic.

If the opponents are smart, they will try to draw out the defenders from their defensive line and quickly exploit the space left behind with a player running into it. The movements for this have to be very well-timed. RB Salzburg did exactly this and were able to produce danger as they passed the ball to a player near the defensive line to attract Trippier to come out. Then, that player passed it back quickly and they made a through ball to the left-back who had timed his run well.

To protect yourself against this, your defensive line has to stay very alert and, in this case, Correa was not as we can see he is not aware of the RB Salzburg left-back making a run behind him. RB Salzburg did this move a couple of times which means that they knew of this potential weakness Atlético had before the game. 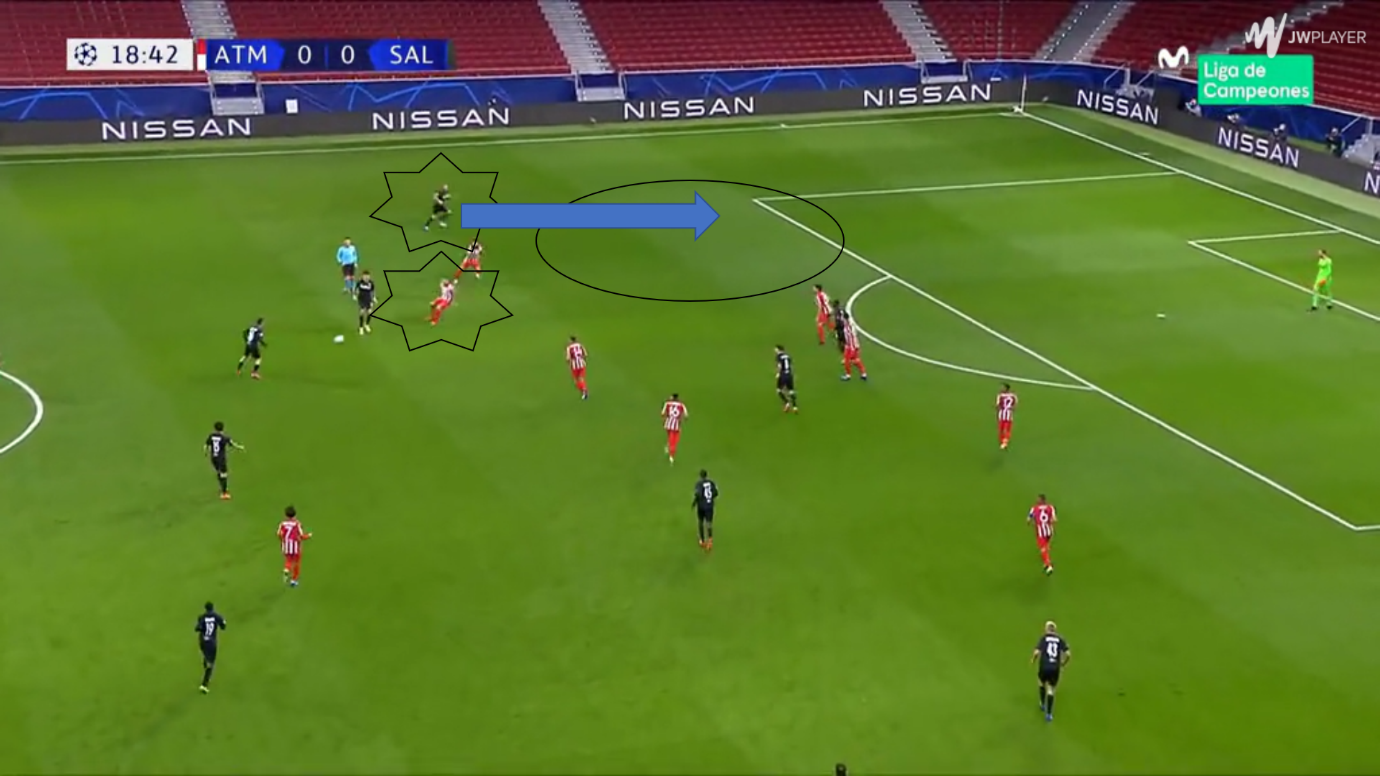 Apart from the potential problem that a smart opponent can cause when a defender steps up, there are also other disadvantages to this system. A drawback is that since there are 3 midfielders protecting the middle, they have a lot of space to move laterally. This means that as the ball changes from side to side, the 3 midfielders constantly have to shift to the sides.

After a while, this can get very tiring for these players. In fact, this is something that Real Madrid tried to use to their benefit as they were continuously switching the play. They did this to fatigue the midfielders and because if they switched sides quickly enough, they might find a 2vs1 opportunity on the wing. Real Madrid used Toni Kroos who is an excellent passer to make these accurate passes.

The example below shows Kroos switching the play and how far away the 3 midfielders are from the receiving player on the wing as they got dragged to the other side. This means that Koke, who is the nearest midfielder to the receiving player, has to sprint over there to help out his wing-back. As the game goes on, the midfielders will start struggling to get to these supporting actions quickly enough and that is when the opponents can have superiorities on the wings. 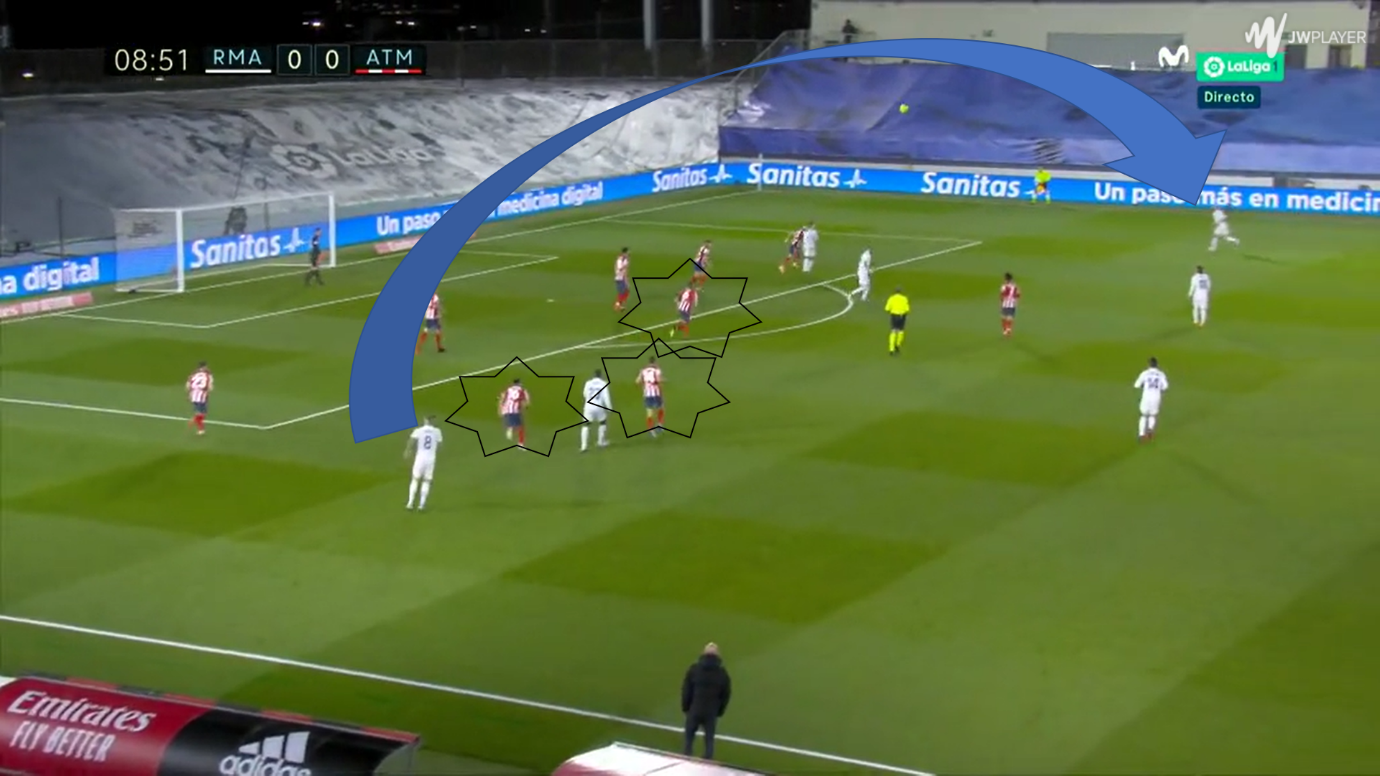 One tool that Atlético has is a bit unorthodox but seems to work. In the case that the midfielder does not reach where the play is to help the wing-back, it is the nearest centre-back to that side that will jump up and help the wing-back.

In the example below, Atlético’s midfielder is not close to the player on the ball and if no one presses him, Barcelona will have a 2vs1 situation against the wing-back. Therefore, the nearest centre-back comes up and presses Barcelona’s right-back. Of course, if played intelligently, the opponents could take advantage of the space left behind, but it is hard because they are now in a 2vs2 situation. 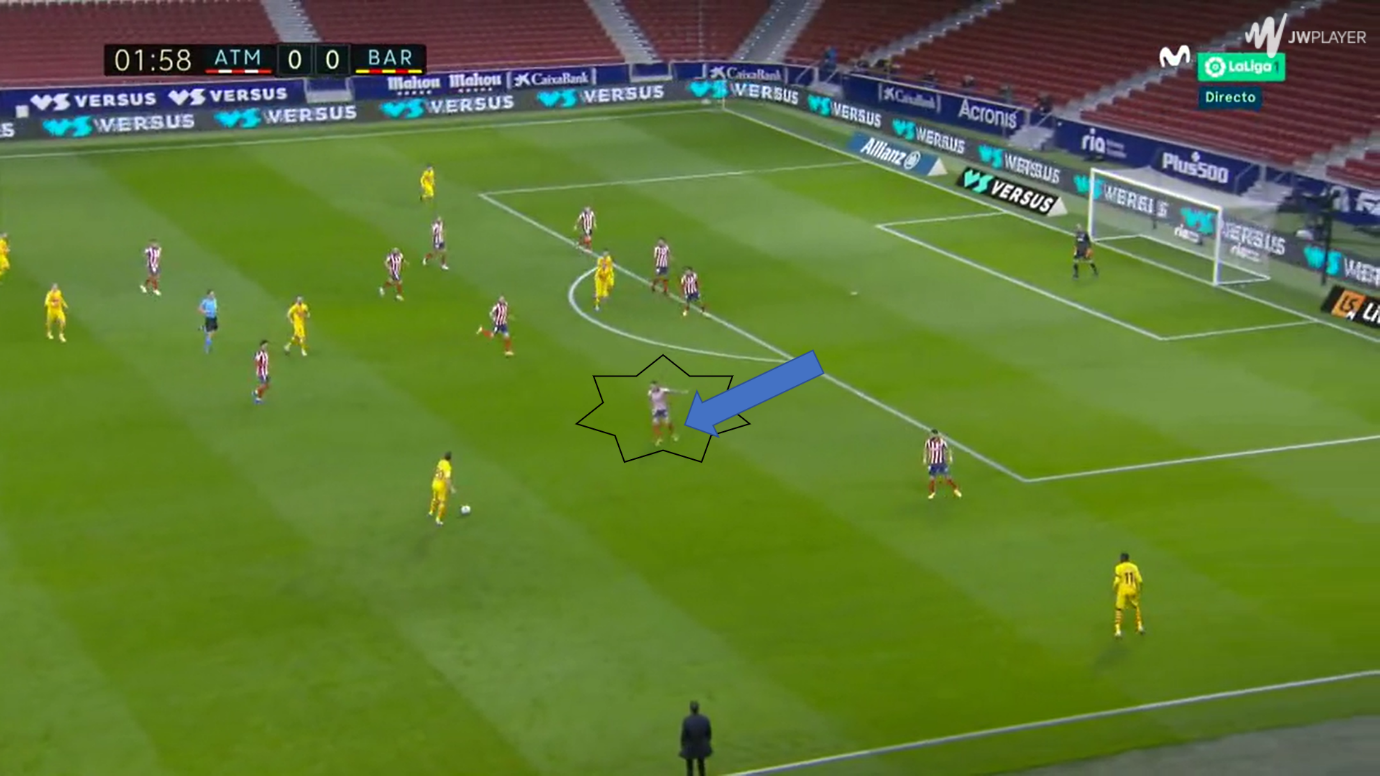 Another disadvantage is that, when Atlético press high, they sometimes leave the opponent’s full-back alone since they have no wingers. This makes it quite easy for the opponent to play out from the back because they know that they will have a full-back in space most of the time.

The example below shows this well. Atlético is pressing high with their 2 strikers and 3 midfielders. This is great to press the central lane, but we can see how much space that the Real Madrid left-back is in. Therefore, with just one pass they can break Atlético’s pressure.

A solution is to bring Atlético’s wing-backs up but this might be too risky as they would then leave the opponent winger alone. This is why Atlético do not press high often and prefer a medium or medium-high defensive block. 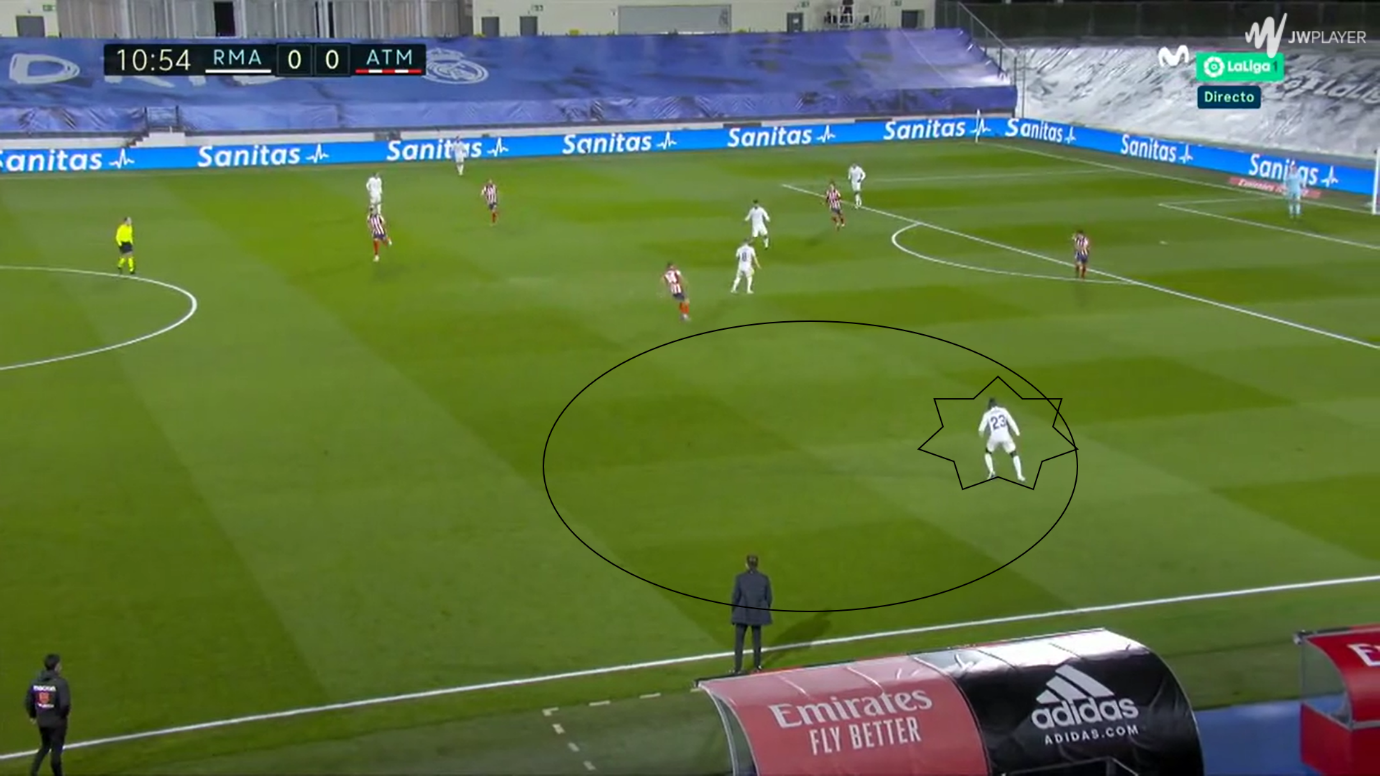 In conclusion, Diego ‘El Cholo’ Simeone has wanted to evolve their way of defending and so far, it is working well as their defence is as sturdy as always. It is true that when they feel that things are not working out, they just revert back to a 4-4-2 and return to the basics but this does not happen often.

Strengthening the middle and adding more men to the defensive line with the 5-3-2 is certainly working for them. Of course, there are disadvantages to this system, as with any system, but they seem to mitigate these problems well. Stay tuned for the next article on how Atlético have changed when in possession.