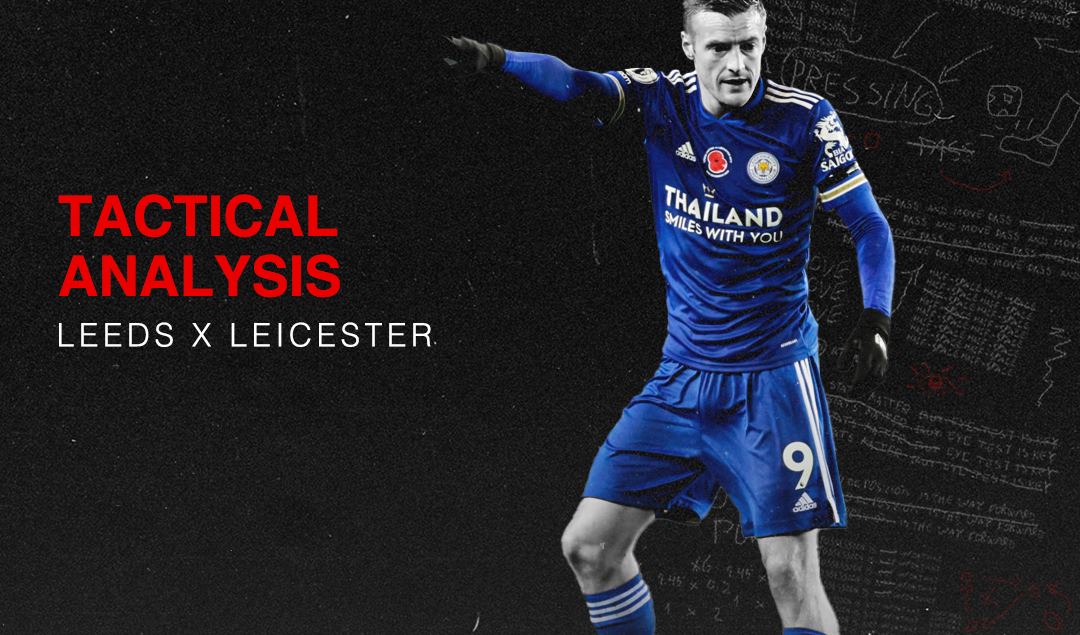 The Foxes came out on top, scoring 4 goals to Leeds’ 1. Brendan Rodgers set his side up in a 5-4-1 as Leicester looked to sit deep in their block and hit Leeds on the transition. They counter-attacked with the aim of utilising their superior quality of attacking players, particularly Jamie Vardy and Harvey Barnes, to create and take advantage of any Leeds frailties or mistakes in defence. 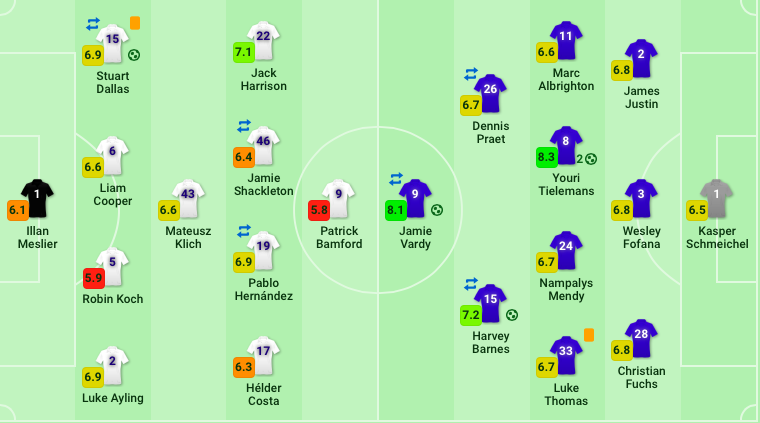 It took Leeds just 90 seconds to create a major goalscoring opportunity. After receiving a pass from Pablo Hernández, Hélder Costa gained separation from Nampalys Mendy and fired a cross into the back post, which Jack Harrison pushed into the direction of the unmarked Patrick Bamford. Unfortunately for Leeds, Bamford fired a tepid header into the palms of Kasper Schmeichel in goal, and the Danish goalkeeper quickly jumpstarted a counter-attack.

One of the major flaws of Leeds’s man-marking system is that it allows one unmarked opposition player to be able to receive in space; in this instance, Christian Fuchs, who launches a hopeful pass across the left flank. Robin Koch looked to have the situation under control, but his attempted back pass to Illan Meslier was intercepted by Jamie Vardy, and the English striker took a touch past Meslier before squaring it to Barnes, who made no mistake with the finish.

“Christian Fuchs was the spare man and you could see he stepped out and made a great pass for our first goal and I think it was for our third goal again”- Rodgers speaking after the game.

They were very aggressive man-to-man. Your spare man is at the back and that really worked well for us. You’re trying to work to find the spare man because everyone else is 1v1  all over the pitch.”

Leicester typically operated in a 5-4-1 shape off the ball, forcing Leeds to break them down in possession; Bielsa’s side maintained 68% possession, completing 639 passes to Leicester’s 302. Leicester’s back five helped them deal with Leeds’s wide attacking threats; as seen in Leeds’ early chance, they can exploit the flanks by crossing it to the back post and switching play to the underloaded flank, but with five defenders, they always had an extra man to deal with Leeds’s width.

Furthermore, Leeds’s central midfielders (Hernández and Jamie Shackleton in this match) tend to push higher up the pitch in an attempt to find space between the lines, but with Rodgers opting for a 5-4-1, Leeds managed to remain compact in central areas. With both fullbacks advancing forward as well, Vardy and Barnes could cause havoc in transition against Mateusz Klich, Liam Cooper and Koch. As a result, Leeds lost their composure and made costly mistakes in possession which created even more counter-attacks.

In this example, Klich’s square pass is cut out by Dennis Praet, who drives forward and finds himself in a 2v2 attacking situation against Leeds’s retreating defenders.

Leicester’s compact mid block succeeded in limiting space between the lines for Leeds players to funnel their passes into. Here, Luke Ayling plays a wayward pass to Hernández, but Barnes blocks the pass and Leicester now have a potentially dangerous counter-attacking situation at their disposal.

The Foxes doubled their lead in the 21st minute when Marc Albrighton delivered a cross from the right flank and into the path of Vardy, whose diving header was rejected by Meslier and bounced towards the ensuing Youri Tielemans, who slotted it into the back of the net.

Leicester often tried to avoid playing out of the back and usually played long balls, but when they did play out of the back, they used their spare man in attack as frequently as possible.

In this example, Schmeichel finds the unmarked James Justin on the edge of the box, who drives into space and plays a hopeful ball, and although his attempted pass is cut out by a Leeds player, Leicester could safely play out of Leeds’s pressure.

Leeds continued to search for a goal before halftime, and they nearly got one in the 38th minute. Klich finds Ayling in the right half space, with the English right back making an inwards run to receive on Praet’s blind side. Ayling plays a through ball behind the flat-footed Wesley Fofana and into Bamford, but the ex Chelsea man’s first touch was too heavy and Schmeichel quickly came off his line to make the save.

Bielsa’s side came out on the front foot after the break, and in the 48th minute, Stuart Dallas’s cross soared over the onlooking players and into the back of the net.

Leeds dominated proceedings for the next 25 minutes, and for the first time in the game, succeeded in sustaining momentum. However, despite having the lion’s share of possession, Leeds struggled to make a dent in Leicester’s 5-4-1, and after weathering the storm, the visitors made it 3-1 thanks to a move initiated by their spare man.

Schmeichel collects the ball and throws it past Bamford and toward the unmarked Fuchs, who dribbles forward and plays a pass to James Maddison. Maddison, who came on in the 63rd minute for Praet, manages to wriggle away from Ayling and receive on the half turn, before playing a through ball towards fellow substitute Cengiz Ünder.

Leicester would add a fourth and final goal in the 91st minute when Klich brought down Maddison in the box, with Tielemans converting from the spot and doubling his tally on the night.

Despite missing key players such as Ricardo Pereira, Jonny Evans, Wilfred Ndidi, Çağlar Söyüncü and Timothy Castagne, Brendan Rodgers’s Leicester not only got a victory at Elland Road, but they dominated proceedings by starving Leeds of chances and causing havoc in transition. For the third time this season, Leicester operated in a 5-4-1, and for the third time, they picked up a victory, having previously beaten Arsenal at the Emirates Stadium and Manchester City at the Etihad.

Rodgers did his homework on Marcelo Bielsa’s side and clearly recognized that Leeds thrived in open and chaotic games, and set his side up in a way to limit these opportunities. “Ideally they want a basketball game where it is up and down the pitch. You have to ensure you don’t get involved in that,”-Rodgers speaking after the game.

Having lost their second Premier League match of the season, Leeds currently sit 12th in the table with 10 points, and they’ll be looking to get back to winning ways when they travel south to face Crystal Palace at Selhurst Park on Saturday. On the other hand, Leicester find themselves just a point off league leaders Liverpool with 15 points from 7 games, and they’ll be looking to strengthen their grip on Sunday when they welcome Wolves to the King Power Stadium.