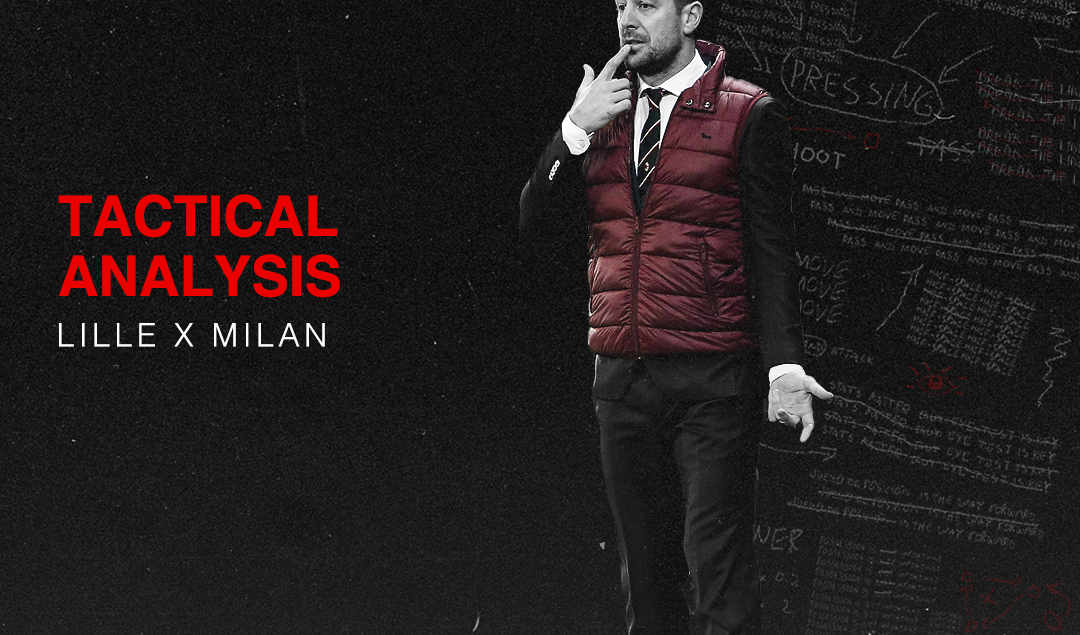 Three weeks after grabbing a commanding 3-0 victory at the San Siro, Christophe Galtier’s Lille welcomed Milan to the Stade Pierre-Maupoy for Matchday Four of the UEFA Europa League group stage. Despite recording 13 shots in comparison to their Italian opponents’s four shots, Les Dogues were forced to settle for a 1-1 draw that saw them hold onto onto a slim one-point lead at the top of Group H.

With manager Stefano Pioli and his assistant Giacomo Murelli both testing positive for COVID-19 last month, ex Milan defender Daniele Bonera coached for the second straight fixture. An assistant coach under Pioli, Bonera had previously led Milan to a 3-1 victory over Napoli at the San Paolo on Sunday.

It was evident from the beginning that Lille were willing to give up the ball and patiently wait to force a mistake and hit Milan on the counter. Indeed, the French side maintained 42% possession and registered 413 passes in comparison to Milan’s 573 over the course of the 90 minutes.

Knowing that Lille would press in their usual 4-4-2 shape, Milan decided to execute the first phase of build-up with a makeshift back three; Diogo Dalot on the right, Simon Kjær through the middle, and 21-year-old homegrown defender Matteo Gabbia on the left. The wide center backs were tasked with providing passes to find the two central midfielders: Ismaël Bennacer and Sandro Tonali. 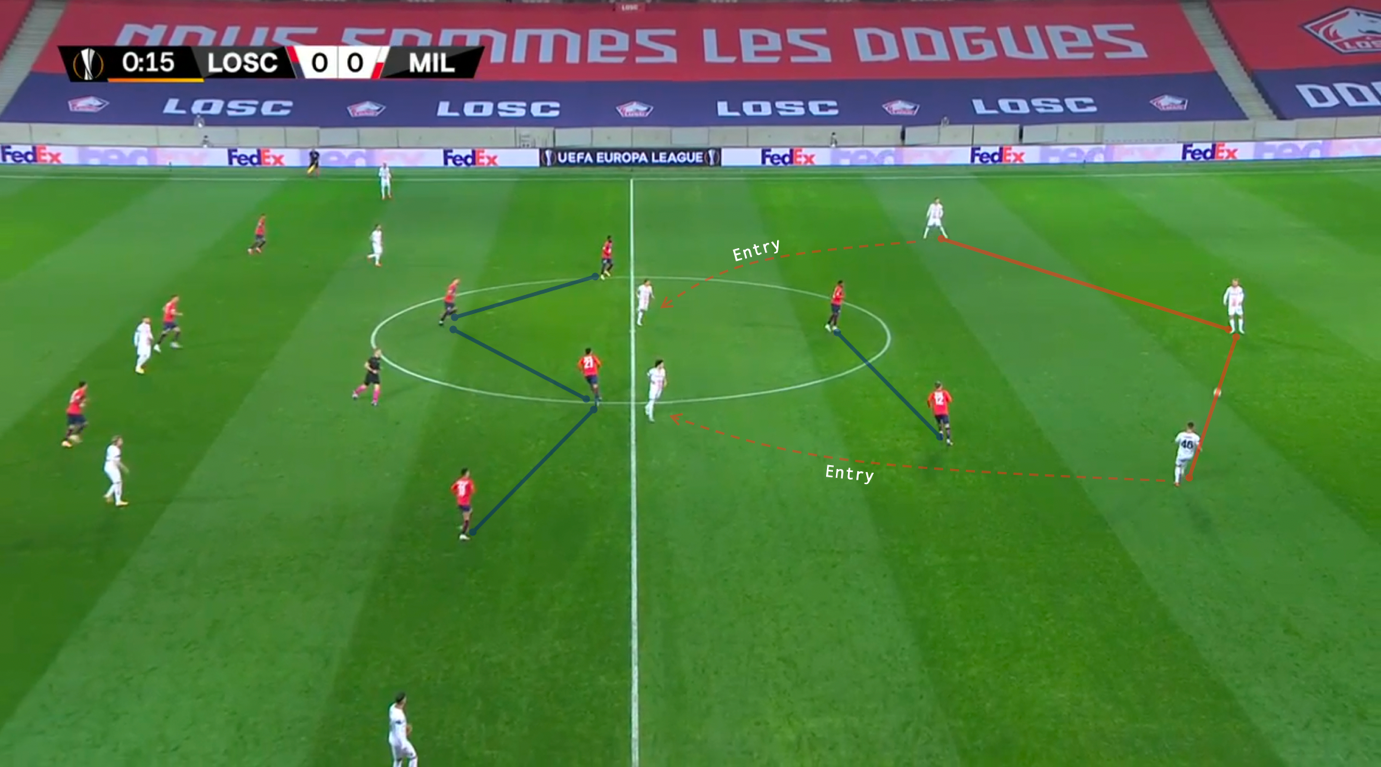 As the two central forwards in Galtier’s 4-4-2, Yusuf Yazıcı and Jonathan David were both tasked with blocking passing lanes to Bennacer and Tonali, knowing the damage they could cause if they received the ball with time and space.

Whenever Kjær had the ball in the middle of the back three, Lille’s strikers would sit deep and make sure that the two midfielders were in their cover, whilst Benjamin André would provide extra cover if needed. This left the Danish center back with no option but to play the ball long or shuffle it to either Gabbia or Dalot. 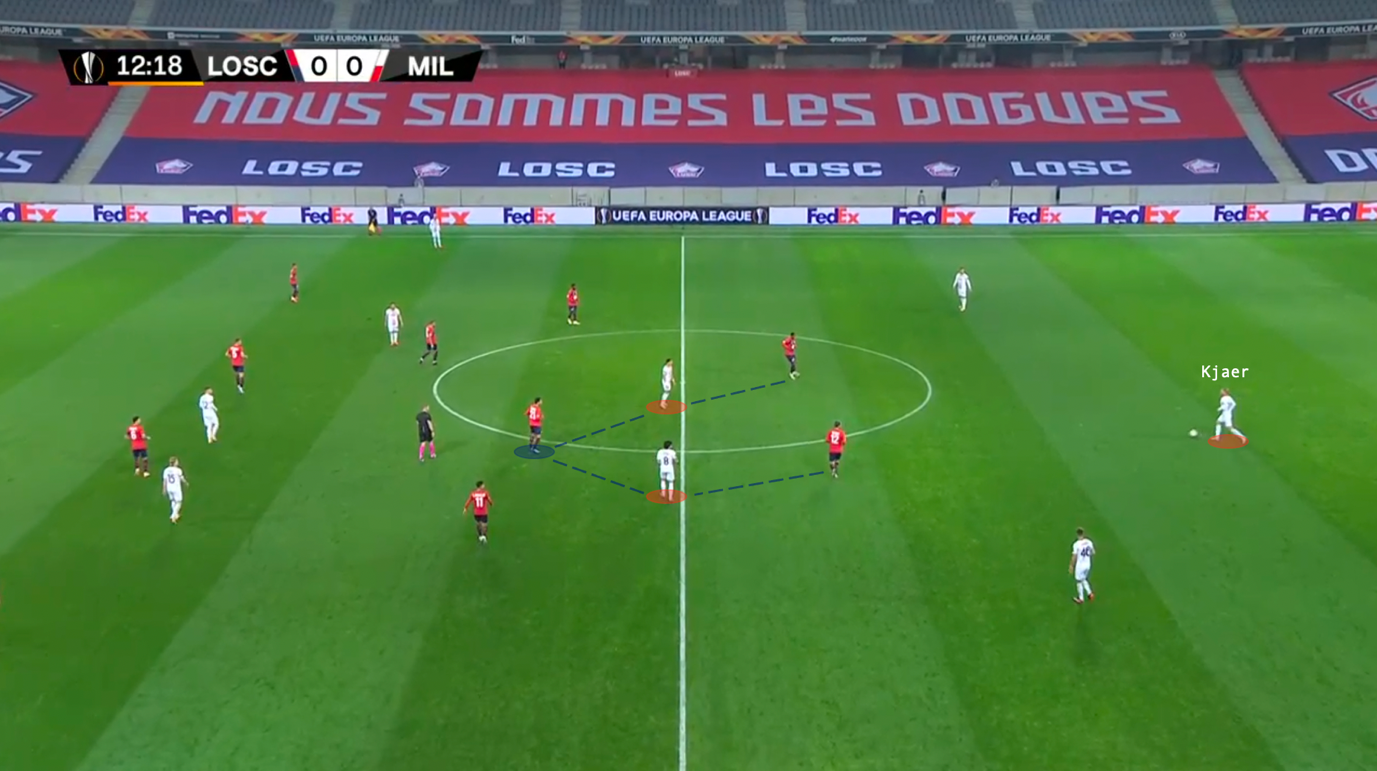 As soon as the ball was passed on to the outside center back (Dalot in this example), the forward on his side would run towards him to apply pressure while making sure his passing angle was as tight as possible. The winger, Jonathan Bamba, would also provide some assistance so that Bennacer would not be able to receive in space, leading Milan’s center backs to keep circulating the ball between themselves before eventually playing it long. 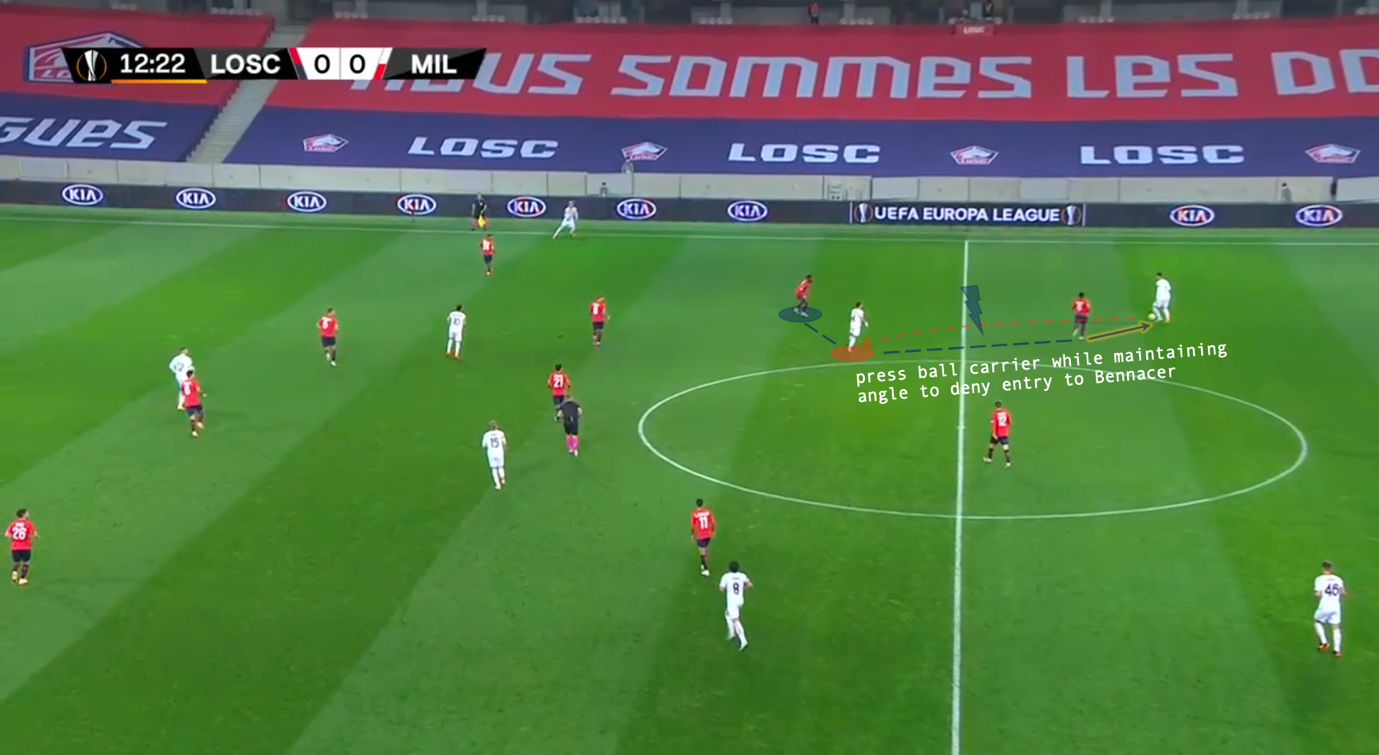 Whenever Lille applied some extra pressure and pushed higher up the pitch, this would leave more space for the Milan center backs to play the ball into. But as it was Lille’s main objective to deny Tonali and Bennacer the ball, one of the wingers (Bamba in this example) and one the midfielders (André) would shift forward as well. 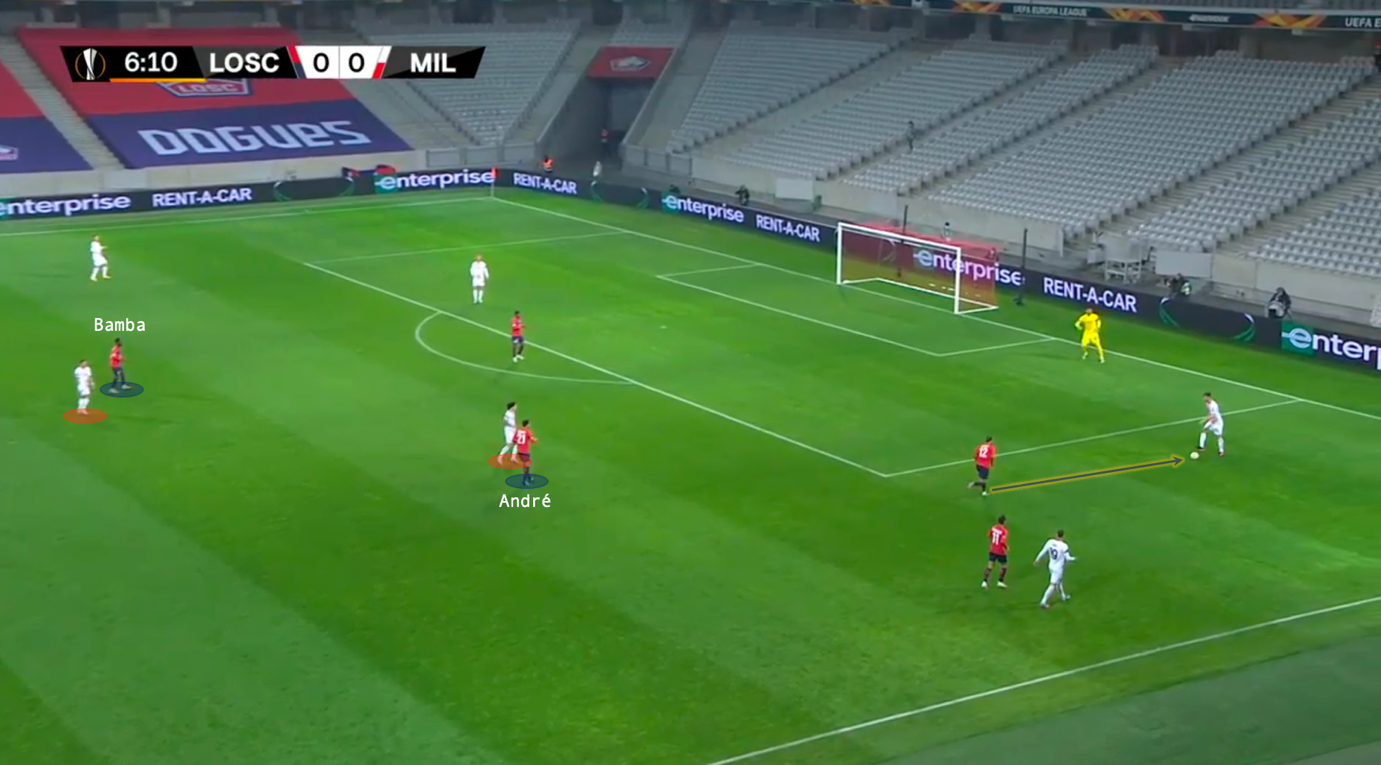 In the few times that Milan’s wide CBs were able to take a risk to find either Tonali or Bennacer with a pass, it would be evident why Lille were so adamant on depriving them of the ball. As soon as the first line of pressure (Yazıcı and David) was broken, Milan were afforded plenty of space to exploit either down the middle or on the left flank with Theo Hernandez. 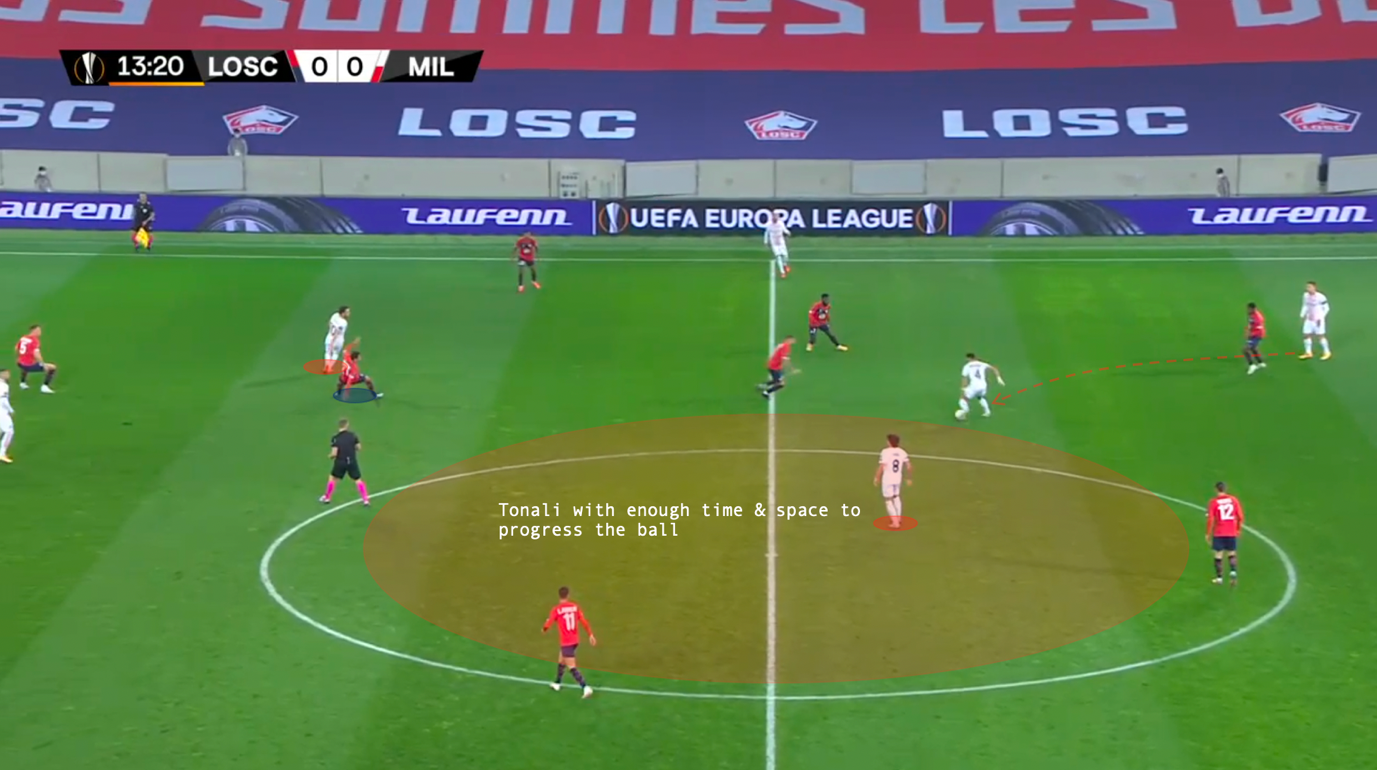 On the other hand, Milan pressed Lille with more conviction and intensity in order to force Lille into making errors during their build-up in order to win the ball back in dangerous areas.

Ante Rebić and Hakan Çalhanoglu pressed the two Lille CBs whilst one of Bennacer and Tonali would join the wingers and apply pressure on the full backs and midfielders. Lille were happy to boot the ball up the pitch and continue to play the long game with Milan, which led to a less eventful first half than expected. 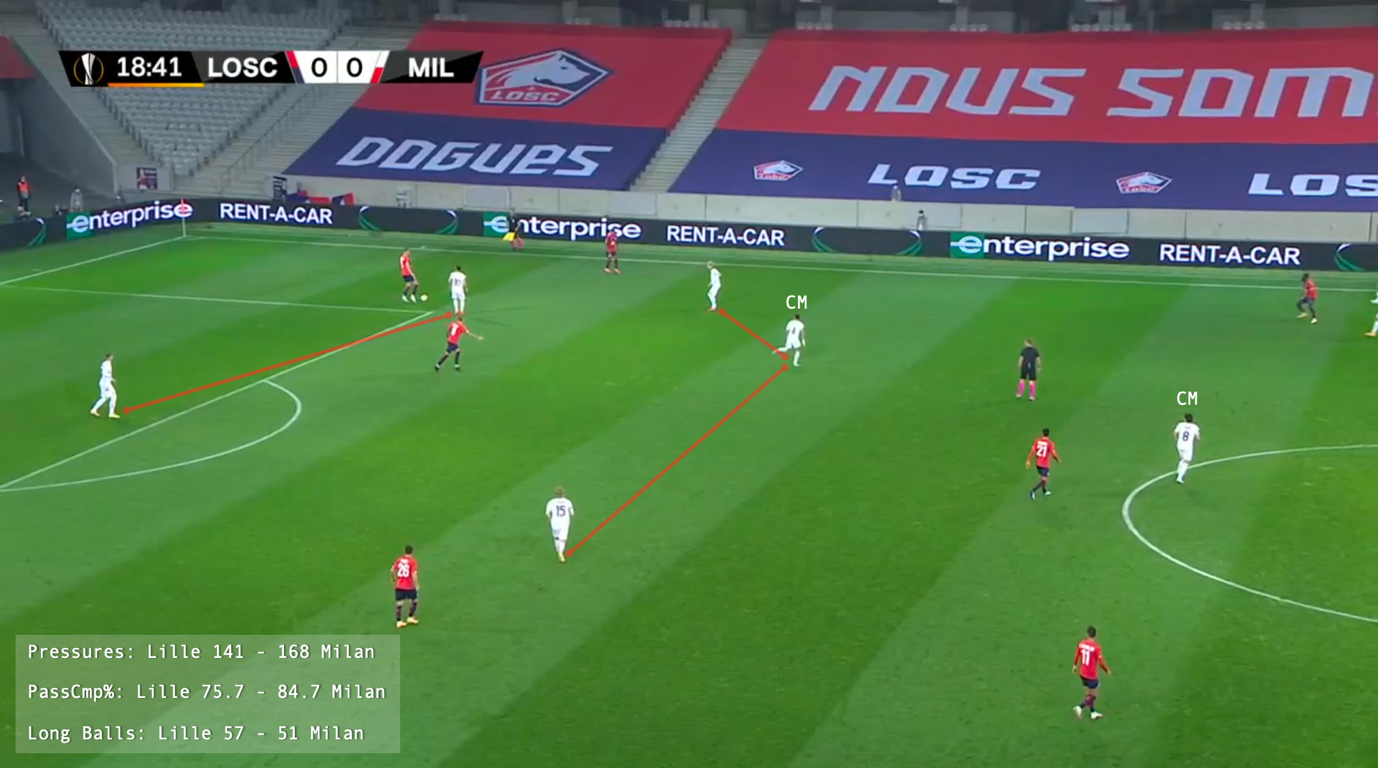 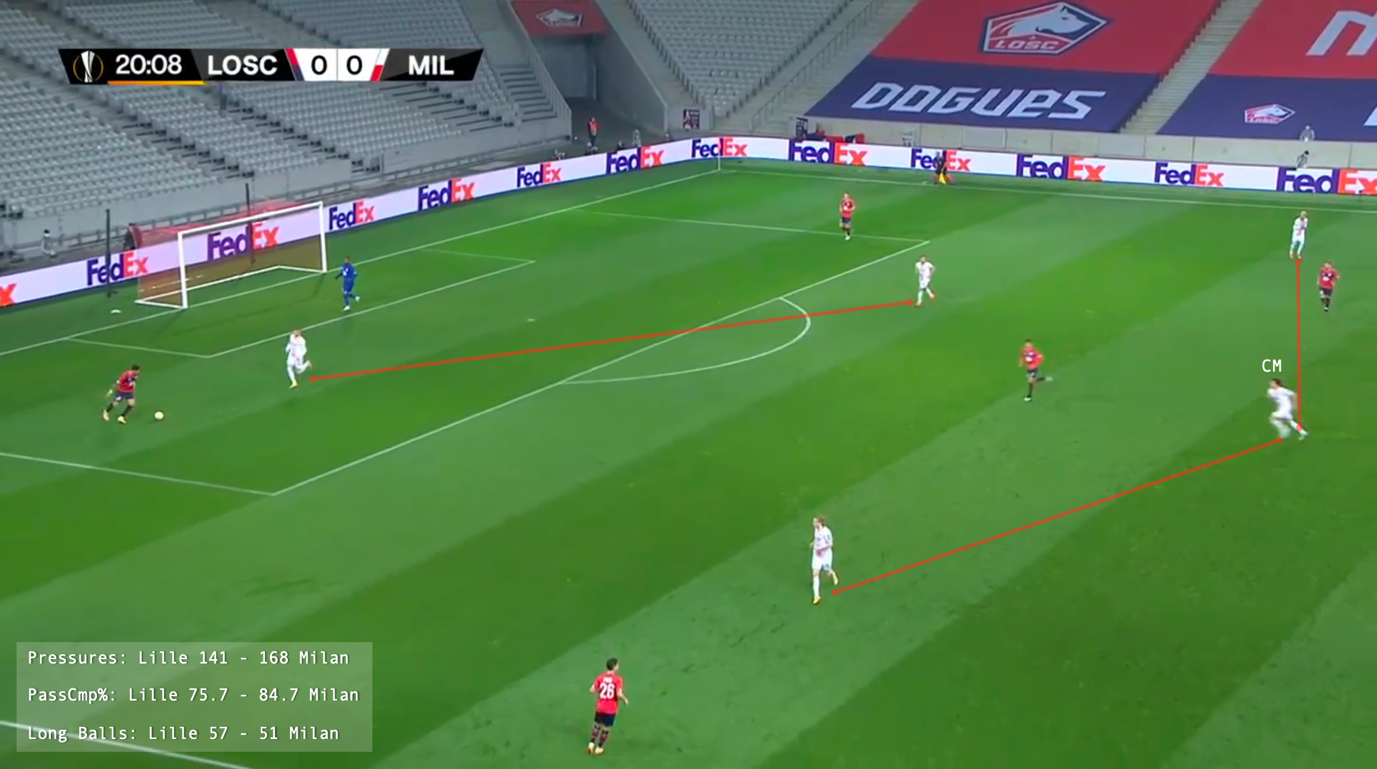 After a relatively drab first half, Milan broke the deadlock within 40 seconds of the restart. Hernandez intercepted Jérémy Pied’s attempted pass before it could reach Yazıcı and the France youth international quickly dished it off to Tonali, who played an inch-perfect through ball that evaded Sven Botman and found Rebić in space. The Croat beat the 36-year-old José Fonte in a foot race, hesitated, and slid in the ball for Samu Castillejo, who slotted in the opening goal.

The obvious way for Milan to bypass Lille’s press was for a third player to join Tonali and Bennacer in the middle of the field to provide more options. Çalhanoglu did this a few times before being substituted in the 61st minute for Brahim Díaz. This forced Xeka, who was playing on the left side of Lille’s double pivot, to follow Çalhanoglu, which left plenty of space for Milan to exploit on the wings. 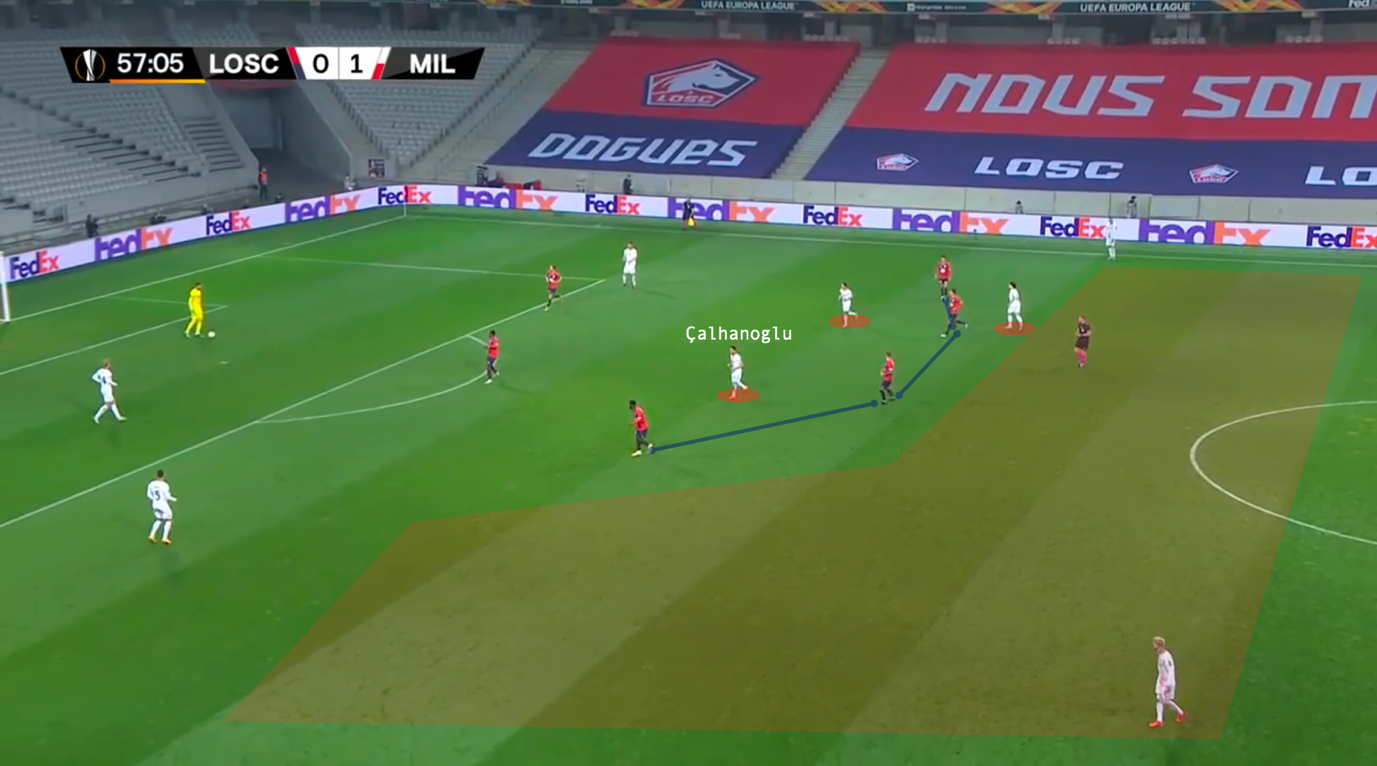 Another way that Milan could bypass the press was by using a specific build-up mechanism. Bennacer vacates his position in the middle, where he was constantly in the cover of Yazici or David, and moves to the touchline. What this does is attract Lille players to that side of the pitch because there are three Milan players there now; Bennacer, Dalot and Castillejo.

Bennacer is a much more accomplished passer than Dalot and can take his time to find the entry pass that Bonera’s side had been looking for from the beginning of the game. Thanks to his superior passing angle and overall impressive vision of the pitch, the Algerian was vital for the second phase of Milan’s build-up patterns. 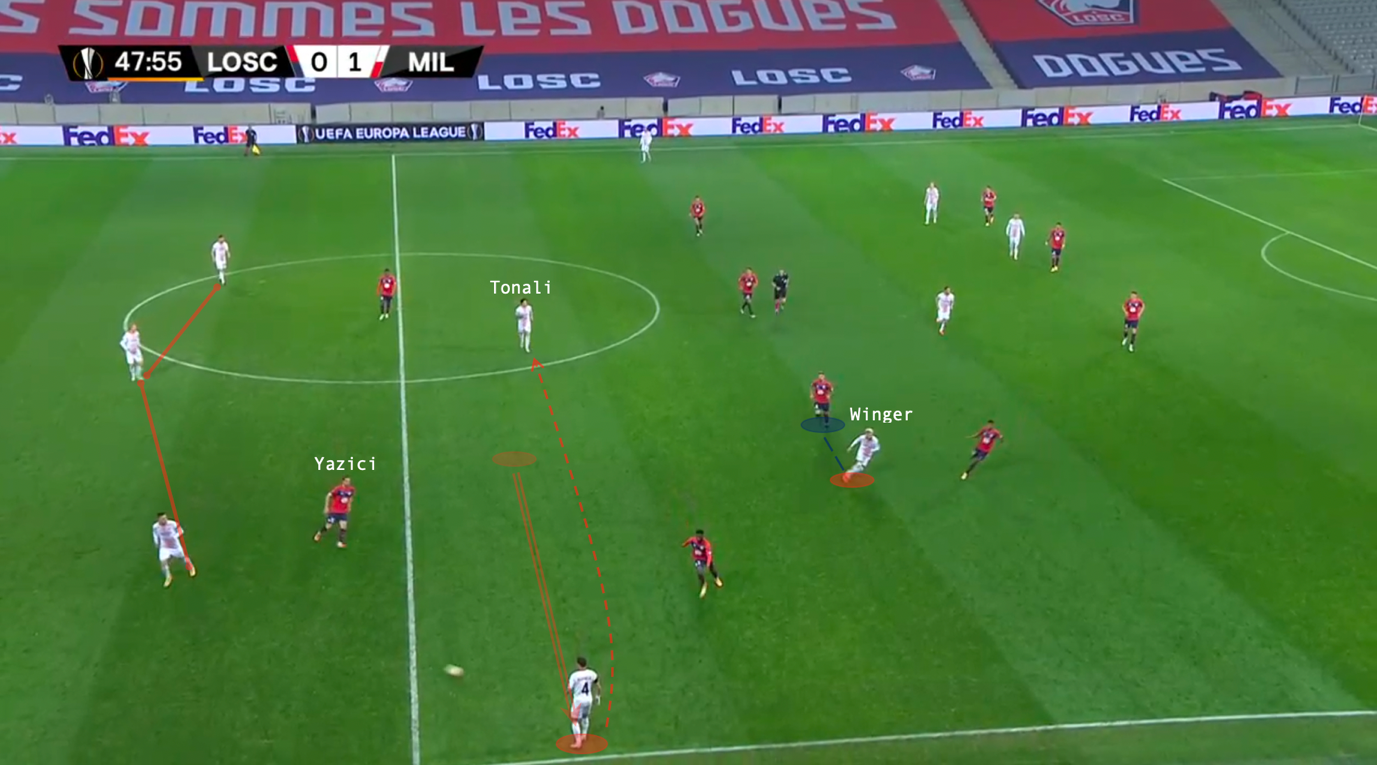 As the game progressed, Lille began to apply more pressure on Milan’s defenders, which enabled them to win back possession in dangerous areas. Whenever they had the ball, Lille’s wingers would move inwards in order to combine with the strikers and leave space for their fullbacks to exploit. 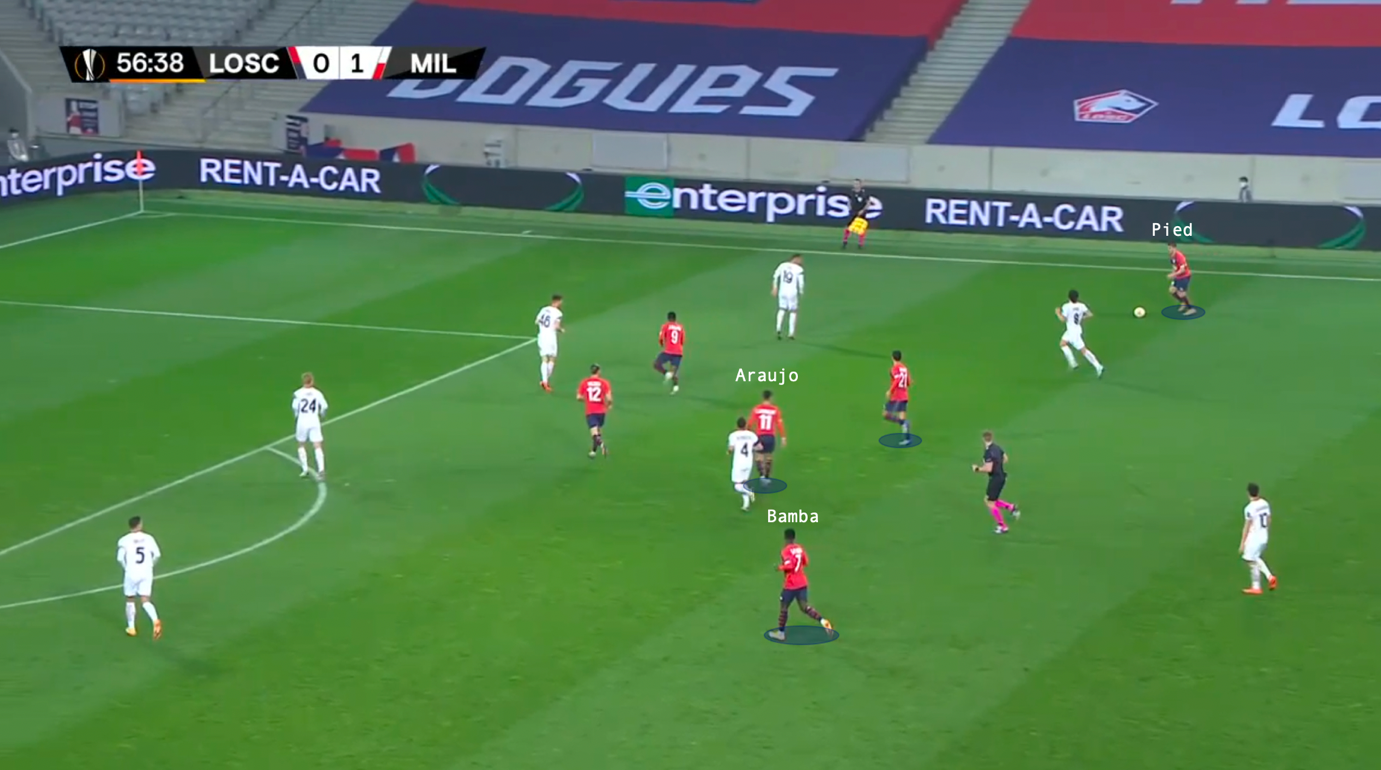 In need of a boost of energy to seize the momentum, Galtier made two changes in the 63rd minute, subbing on Jonathan Ikoné for Yazici and Boubakary Soumaré  for Xeka. Within 90 seconds of the double sub, Lille had found an equalizer.

Pied quickly took a throw-in and found Ikoné at the edge of the box, and his deft flick around the corner directed the ball into Luiz Araújo. The Brazilian smashed a cross on the half-volley into the penalty box, and David took a deadly touch to control the ball and leave it for Bamba in space. Bamba’s resulting shot beat Kjær, Dalot and Gianluigi Donnarumma and slid into the bottom right corner, giving Lille a much-needed equalizer.

After securing the equalizer, Lille returned to their initial plan of preventing Milan’s defenders from advancing the ball to one of their midfielders. Bonera only made one substitute following Bamba’s goal, taking off Jens Petter Hauge after an ineffective performance from the Norwegian and replacing him with Rade Krunić in order to shore up the midfield. On the other hand, 18-year-old winger Isaac Lihadji entered for Araújo, whilst Tiago Djaló replaced Pied after the latter was taken off due to injury.

The lack of Zlatan Ibrahimović due to a muscle injury had massive repercussions for the away side, as the Rossoneri were starved of a target man who could hold up the ball and win aerial duels, whilst Renato Sanches’s absence deprived Lille of dynamism and creativity in midfield. Nevertheless, Milan bounced back with a resounding 2-0 victory against Fiorentina, whilst Lille dropped points to Saint-Étienne on Sunday after drawing 1-1 at the Stade Geoffroy-Guichard.