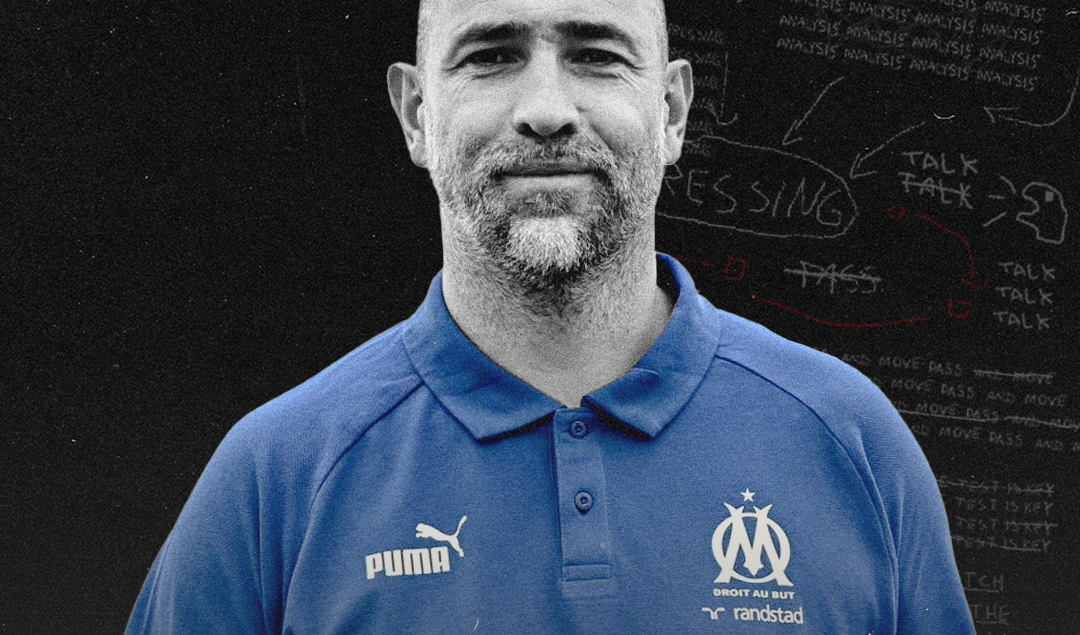 The 62-year-old complained about a lack of transfer activity, something that his predecessor André Villas-Boas also lamented, and the Ligue 1 side has swiftly appointed a coach with a lower profile in Croatian tactician Igor Tudor, confirming his appointment on July 5.

After coaching at various clubs around Europe, the Croatian was assistant to Andrea Pirlo at Juventus for the 2020/21 campaign, and then he became a head coach again after replacing Eusebio Di Francesco at Hellas Verona just three rounds into the 2021/22 Serie A season.

The Gialloblu finished ninth at the end of the Italian league campaign and the Veronese played some exciting and enthralling football under Tudor. They also had the fifth most prolific attack in Italy’s top flight with Atalanta, scoring 65 goals in 38 matches. What should Marseille fans expect from their new coach?

Tudor does not bring much of a pedigree in terms of silverware. His only major success as a coach was winning the 2012/13 Croatian Cup with Hajduk Split, and he also achieved his highest league finish as coach there, finishing third in the Croatian First Football League with the club from Dalmatia in 2013/14.

However, his work at Hellas Verona was very impressive and his way of coaching should not deviate too much from the style of Sampaoli. While he was in Verona, he was able to get the best out forwards Gianluca Caprari and Giovanni Simeone, who had struggled at other clubs for consistency, while Adrien Tamèze had a stellar campaign in midfield and Nicolò Casale emerged as an unlikely star in defense.

If recent coaching stints are anything to go by, Tudor will mostly likely play with a back three at Olympique Marseille. Aside from his spells at Turkish clubs Karabükspor and Galatasaray where he predominantly used the 4-2-3-1 formation, the 44-year-old has often alternated between the 3-5-2 and 3-4-3 formations as well as their respective variants.

While he was at Hellas Verona, Tudor brought back the 3-4-2-1 that was used by his compatriot Ivan Jurić. Although numerous players that played under Jurić have been sold or returned to their parent clubs, Tudor was able to integrate the players at his disposal into the formation and they did not look out of place.

Sampaoli implemented the 4-3-3 formation at Marseille more than the other ones but he did use the 3-4-3 and even the 3-4-2-1 at times. While implementing the back three might have been a flirtation for the Argentine, his Croatian successor will probably stick with it religiously.

The Gialloblu lost their first three matches of the league campaign under Di Francesco, who had been brought in to replace Jurić after the Croat left for Torino, and Tudor brought back the football philosophy implemented by his compatriot albeit with some of his own tweaks.

Mattéo Guendouzi and Marseille: A Match Made in Heaven

Hellas Verona was a team that did not regularly dominate possession or try to monopolize it. The Gialloblu under Tudor would defend in a deep to middle block and capitalize on the space in front of them by making quick transitions.

When Jurić was in charge of the Veronese club, the players defend in a deep block, but would still find ways to press opponents. However, they were more patient in possession and play short passes. Tudor’s team was more direct and would move the ball quickly in order to expose teams on the counter-attack.

To illustrate how Hellas Verona constructed its attacks, here are three examples of goals that typified its play. Although they might not be the three most spectacular goals scored under Tudor, the construction of these strikes are the best examples of how the Gialloblu players ran and moved the ball under the Croatian tactician.

The first goal displayed in the graphics is the Veronese club’s first goal in Tudor’s debut on the Mastini bench. Verona earned its first victory of the 2021/22 Serie A season, overcoming a 1-0 deficit at half-time against Roma to win 3-2 in Week 4.

Antonín Barák equalized four minutes into the second half after the ball was quickly moved from the left-wing and into the penalty area. A through-ball from the boundary played by Darko Lazović was quickly played forward and left-winger Gianluca Caprari runs onto the ball when he arrives in the space ahead of him.

Caprari then runs into the box and tries to play the ball behind the Roma defense. The Verona players find themselves in a 3 v 4 situation around the penalty area but Gialloblu right wing-back Marco Faraoni makes a late run at the back post in case the ball enters that space. The attempted low cross is deflected by Giallorossi defender Gianluca Mancini and Rui Patricio is forced into a save. 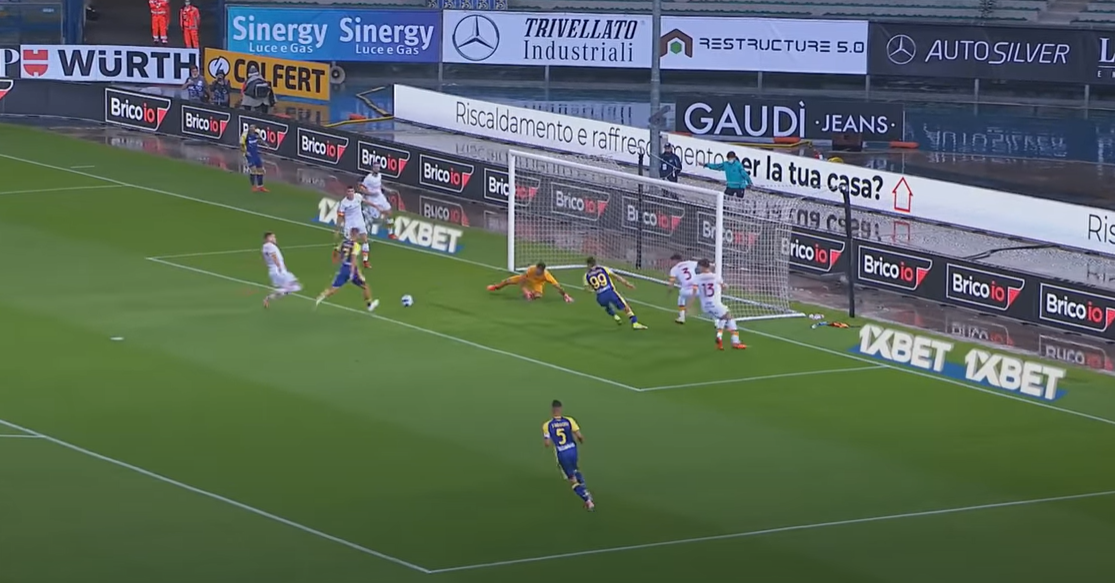 However, the Roma goalkeeper could only parry the ball in front of him and although Simeone had advanced too far forward, Barák was not too far behind so he was able to tap the ball in with consummate ease.

All it took to generate that attack was one delightful through-ball from Lazović. He had the vision to notice the space in front of Caprari and made the pass. Caprari used his pace to run into space while three other teammates surged forward to make those late runs into box.

The quick passing and movement as well as the timing off the runs caught the Roma defense flat-footed and they could not react quickly enough to stop the Verona attack. The Gialloblu demonstrated that if an opponent left space at the back and it was not quick enough to react, they would pounce.

Another example of Hellas Verona’s swift attacking movements was the opening goal in the 1-1 draw at home to Fiorentina in Week 19, which was scored by Kevin Lasagna. It was a much more direct goal than the example against Roma but this too involved a quick exchange of passes.

A goal kick from Fiorentina goalkeeper Pietro Terracciano was intercepted by one of the Gialloblu defenders and headed forward. Caprari turns around and runs forward into the space while noticing that Simeone is coming back to receive the ball. 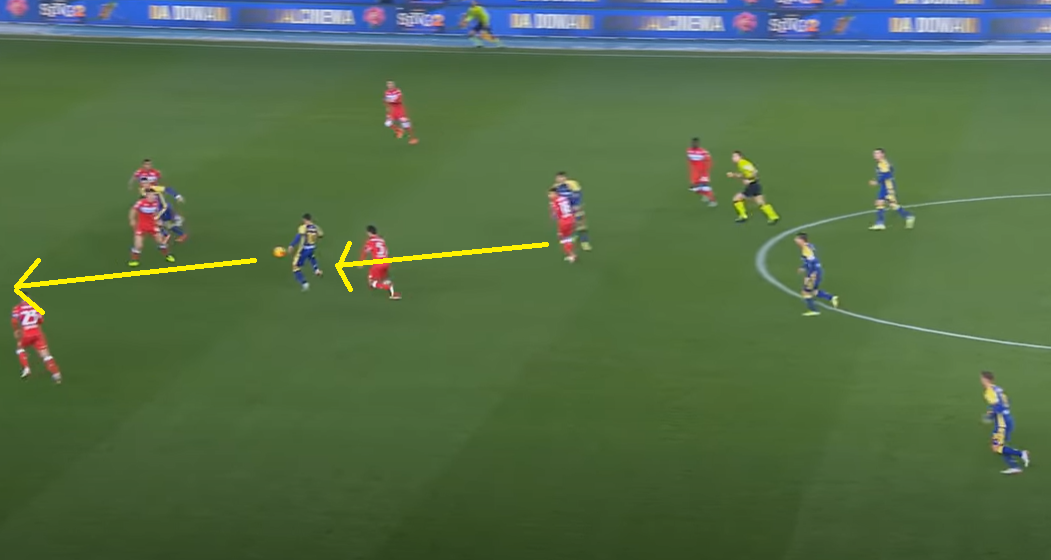 The Argentinian striker heads the ball down into the path of the diminutive Italian, who then spots the diagonal run of Lasagna and plays a first-time ball forward for his compatriot. Lasagna notices that Terracciano hesitates and he is able to strike a first-time shot into the bottom corner.

That goal showed that Verona was capable of capitalizing on mistakes quickly. The Veronese won two aerial duels with ease, and even once the ball was brought back onto the ground, it was still moved rapidly, giving the Viola little time to close down the Gialloblu players.

If the pace in which the ball was moved was enough to unsettle the Fiorentina defense, Lasagna’s diagonal also stretched the Gigliati back and also placed Terracciano in a state of confusion.

The third and final example is Caprari’s first goal Hellas Verona’s 2-1 victory away to Spezia in Week 20, when the forward on loan from Sampdoria scored twice, and this particular goal started from dispossessing one the Aquilotti players in the Veronese half. 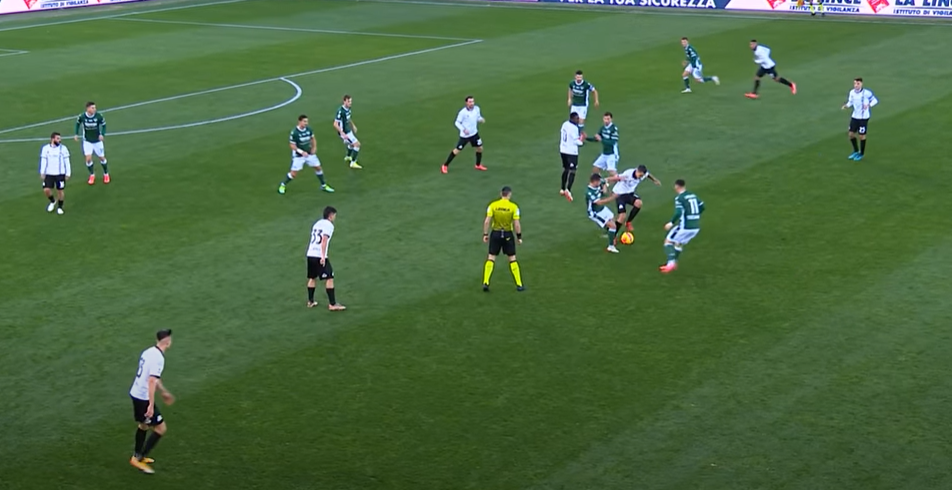 Spezia midfielder Jakub Kiwior tried to turn but Caprari took the ball off him and Lasagna (wearing the #11 jersey) was able to dribble into Spezia’s half. Caprari also ran into the Aquilotti half while the Spezia players were drawn to Lasagna’s marauding run.

As the defenders swarm towards him, Lasagna plays a through-ball to Simeone to the right of him. The Argentine gets involved in a duel with Dimitrios Nikolaou and the ball is deflected off the Spezia center-back.

Caprari has continued his run towards the back post and the ball deflected towards him is then struck hard and low into the net despite Ivan Provedel’s efforts to keep the ball out.

This goal demonstrated another example of Hellas Verona’s ability to capitalize on mistakes as well as utilize its speedy players. In the modern game, pressing is an important aspect of the game and the Spezia players focused on applying pressure on Lasagna when he is dribbling. Unfortunately for them, they end up neglecting Simeone and Caprari who run into the spaces and receive the ball at the right moments.

Simeone might have been able to shoot if the ball was played by Lasagna earlier and Nikolaou might not have got close to the ball. Regardless if Simeone wanted to shoot or if he wanted to pass to Caprari all along, the Italian forward never broke his momentum and he was able to make his way to the back post to get into that scoring position.

Jorge Sampaoli guided Marseille to second place in Ligue 1, earning the southern French club a place in the 2022/23 Champions League, and it also reached the semi-finals of the inaugural Conference League.

The experienced Argentinian coach will be a loss because he was a tactician capable of bringing the best out of his players and his teams played football consisting of quick movement as well as intense pressing.

Tudor might not have the same reputation or pedigree, but if his work at Hellas Verona is anything to go by, he might be able to build upon the foundations laid by Sampaoli and at least have another stellar campaign in Ligue 1.