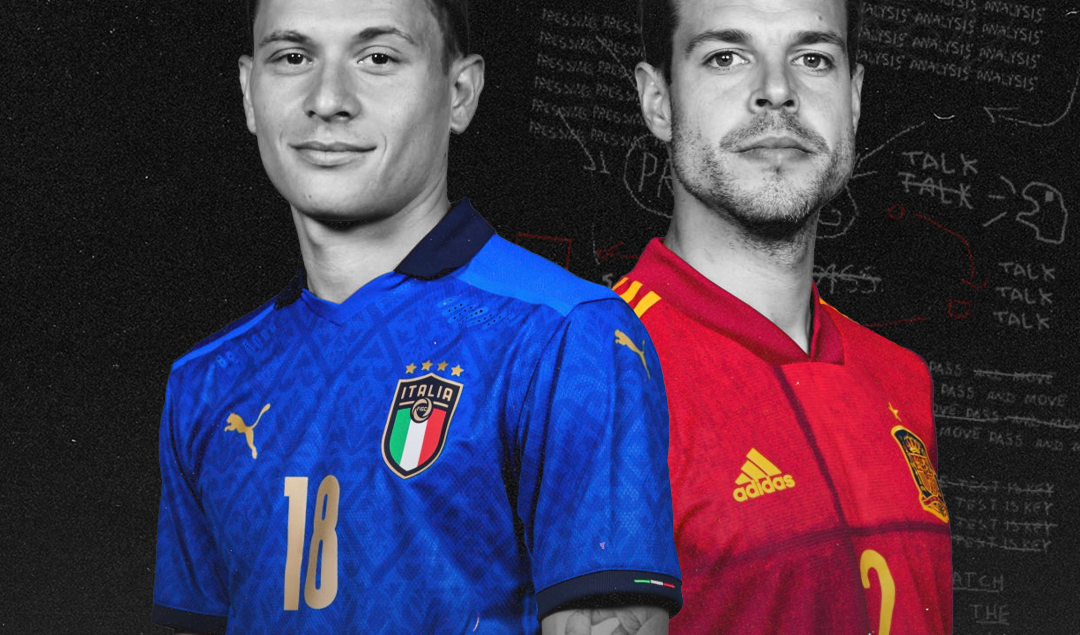 As the first semi-final of the Euros looms we get to witness the tournament’s two best and most decorated coaches collide in Luis Enrique and Roberto Mancini. Both former beloved sons of Barcelona and Sampdoria respectively, both tasked with healing wounds of footballing nations after falling, getting to work on rebuilds to usher in more youthful rosters.

On the basis of the tournament alone, the style of football, the fervour awoken in the fans and getting to a semi-final in the first place, you could say Mancini and Enrique have achieved what they wanted to in restoring national pride and can leave the tournament with their heads held high.

Neither of course, would be content with this however and as they both rest their heads on Tuesday night somewhere in different lavish hotels in London, the Italian and Spaniard will be wondering what their opposite counterpart has up their sleeve for the tie. In what is sure to be a tactically fascinating matchup it is worth unpacking the details of where the game will potentially be won and lost:

Press-ure Cooker: The Battle of the Pressers

Unless there is a meteoric 180 in the style of the two teams which is highly unlikely, both teams will be in the know that they will press one another to the death, this is what will decide the game, who will be able to press with the most effectiveness. Pressing enough to gain the upper hand but also covering themselves in defence to ensure they aren’t left exposed.

Spain are the most successful pressers of the tournament with 37% and 655 presses, Italy are less successful with 26.5% and more presses in 744. Both teams have successfully utilised pressing as a quintessential tool in getting this far, with Spain being the more effective with fewer presses.

This makes sense, as Spain have been superior in possession in all of their matches and have been keen in winning the ball back quickly to exhaust opponents with their more direct version of tiki-taka, whilst Italy’s press works in disturbing the opponent more frequently as to not get the ball back immediately but ensure opponents moves aren’t so smooth.

What may give Mancini food for thought is when Italy looked the shakiest in the tournament vs Austria. The Austrians terrific pressing disrupted the Azzuri and never allowed them to get into their electric attacking mojo. With Spain being the most successful pressers they will look to win the ball back and settle into their passing rhythm, getting the ball forward as quickly as possible whilst trying to also navigate the Italian press.

Luis Enrique has frequently mentioned an ‘idea’ of how he wants Spain to play ‘We always look to create as many chances as possible, try and control the play. When we have to defend we high press in their half and win the ball back as close as possible to their goal.’ Enrique would’ve took one look at Austria-Italy in preparation and thought that is exactly what we need to do, the Austria ‘manual’ will be crucial to stopping the tournaments slickest attack.

Mancini’s Italy have undergone a full rebirth, this isn’t the master of defenders Italy of yesteryear, this is boom-bap, heavy metal, full-throttle football. Italy’s vigorous football is led from the front as they are the top team for pressing in the opponent’s attacking third, whilst Spain are ranked 3rd.

Both teams will look to press each other in their own half attempting to disable their ball-playing centre backs (Aymeric Laporte, Eric García, Leonardo Bonucci, Giorgio Chiellini) from releasing the ball. What is intriguing is Spain have not yet had their ‘Austria’ as they have mainly played teams in low blocks that have attempted to stifle them.

This semi-final will certainly not be soporific, no low blocks will be found here as both teams will constantly look to limit the other when they have the ball. The test for Spain is what their reaction will be to the first team that doesn’t allow them time on the ball and has a relentless press with speedy players ready to recycle the ball quickly to create chances. If Spain are to press like the Austrians, they boast a higher calibre of technically gifted players that are likely to create more opportunities than Austria did.

Being the best at pressing in the tournament may lead to Spain creating plenty of chances in transition as we saw on the occasions Belgium caught Italy cold as the majority of midfield and the whole attack had committed up the pitch. It is a question of whether Spain will be as wasteful as they have this tournament in their spurned chances.

My apologies as you probably heard the word ‘press’ a thousand times in that paragraph akin to when Antonio Conte used the word ‘work’ in his first Chelsea press conference 32 times, but this alludes to the importance of it for the semi as it’s a key cog for both of these teams.

No Spinazzola, No Party?

Italy will be bereft of the devastatingly aggressive Leonardo Spinazzola who has easily been one of the players of the tournament. Him and Lorenzo Insigne have been a bolt of lightning on that left-hand side, startling opposition with their thrusting play. Italy have normally attacked with him as a crucial outlet in attack with Jorginho covering and the other two midfielders joining the attack they will crucially lose a massive insurgence of pace and overload on the left.

Does Mancini roll the dice and bring in the brilliant Alessandro Bastoni at left back where he has played on the left side of a back three many a times this year or does he stick with the steady but not very attacking Emerson Palmieri to take care of the overlapping Jordi Alba?

Enrique will take encouragement from the fact that Insigne will be missing the support of Spinazzola as it may upset the cohesion of the Italy attack. Italy’s left side has been its focal point of attack but it will be less effective without Spinazzola.

It isn’t a case of England’s ‘golden generation’  where the names scream gold on paper and lead in the play, the dynamic trifecta of Jorginho-Nicolò Barella-Marco Veratti understand each other well and play together fabulously. Rotating the ball quickly joining in the attack, pressing with enthusiasm and keeping Italy moving with quick ball circulation.

Now, take a veteran Barcelona midfielder who has been one of the best CDM’s of the last decade, a future prospect hailed as the next ‘Xavi’ and a rejuvenated Atlético Madrid warrior, equally you have Spain’s formidable midfield. The trinity for Spain is Pedri-Busquets-Koke, Pedri has been the one to make Spain tick, possibly not even in this Spain team if the tournament took place a year earlier.

Pedri is the young precocious ‘Jack Grealish’ talent of the team, a total incarnation of the more direct version Spain play under Enrique, him and Koke roam freely looking for overloads and to pull the strings to provide chances and will pop here, there and everywhere. Sergio Busquets has come in to bring calm and serenity after  Spain’s stuttering start, Enrique could play the way he feels more with him in midfield, and Enrique’s ‘idea’ of how this team should play and the players that go with it are everything.

Both midfields have the ability in abundance to be the orchestrators, to play the passes that will create chances. Veratti and Pedri are the two midfielders that have driven the ball forward the most in the tournament, but what it will come down to is who will be able to snappily shut one another’s midfield down the quickest. Busquets and Jorginho the unsung heroes, the enforcers who will control tempo and organisation when both teams lose the ball but lead the charge in beginning the attack when both teams have it.

Busquets has a case to give a name change of the ‘Makelélé’ role to the ‘Busquets’ role he has been that synonymous with the position, but in Jorginho he is playing someone who can make a case at being the best in the world currently at the role. There is only three years between them but it feels as though Busquets has been performing the task of ‘conductor’ forever.

‘El Pulpo’ is the silent guardian the ‘snowplough’ as Gerard Piqué referred to him, Jorginho bellows out instructions doling out commands given the nickname ‘Radio Jorginho’. Whether the snowplough silently smothers Italy or the radio assertively startles Spain is where the game will be won.