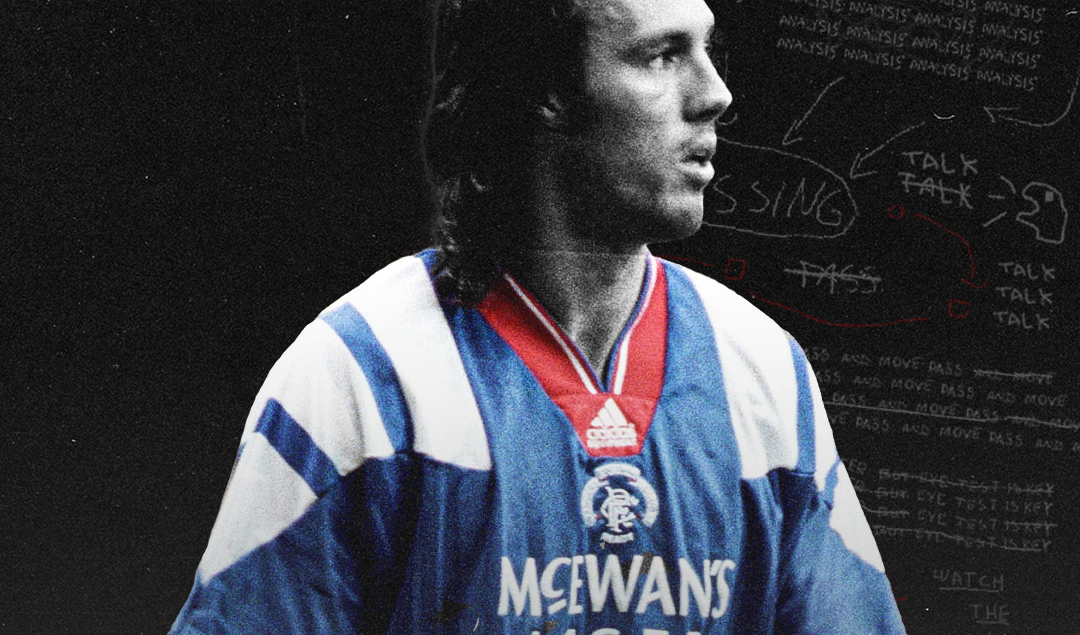 In Europe, Raymond Goethals’ side were holding out hope that the newly formatted Champions League tournament would see their fortunes turn around in international competition. After dispatching Glentoran and Dinamo București in the opening rounds, Marseille were drawn into a group of Rangers, Club Brugge, and CSKA Moscow. Les Phocéens succumbed to a draw in Scotland after conceding two late goals, but they bounced back two weeks later with a resounding 3-0 win against Club Brugge.

Marseille traveled to Berlin to take on CSKA Moscow for the third matchday. UEFA had prevented CSKA from hosting their matches in their home country due to the unstable political situation in Russia, but even in a makeshift home, CSKA were formidable opponents. In the previous round, they had eliminated Johan Cruyff’s Barcelona from the Champions League, with CSKA clawing their way back from two goals down to prevail with a 4-3 victory at the Camp Nou.

After settling for a 1-1 draw at the Olympiastadion, Marseille demonstrated their Champions League credentials with a 6-0 thrashing of CSKA Moscow at home. It was a puzzling scoreline in its own right, but the accusations that followed only raised more eyebrows. CSKA manager Gennadi Kostylev claimed that his players’ drinks had been spiked with an “adulterated tea,” causing them to fall sick prior to the match in France. He also claimed that he received a call from a Marseille official who offered him money in exchange for throwing the match. However, Kostylev abruptly withdrew his allegations when pressed by UEFA.

On April 7, 1993, Marseille faced off against Rangers at the Vélodrome. The stakes could not be higher; both teams had entered the match with 5 points, having won two matches and drawn 2-2 in Glasgow. As such, Marseille needed either a win, a 1-1 draw, or a stalemate in order to go into the final matchday as group leaders. Rangers, on the other hand, needed a victory or a high-scoring draw in order to leapfrog their French opponents and move to the top of Group A.

As fate would have it, they would have to face Marseille without star striker Mark Hateley, who scored the equalizer at Ibrox in the opening group stage match. The English forward had carved out a reputation for himself as a physically imposing target man with a goalscoring instinct, having scored 23 goals in 35 appearances for Rangers during the prior campaign.

In the days leading up to Rangers’ home match against Club Brugge, Hateley received a call from a French-speaking agent, who offered him a large sum of cash not to play against Marseille. Hateley refused, but midway through the Brugge match, he was sent off for a seemingly innocuous scuffle in the penalty area and suspended for the following match.

Even without their top scorer, Rangers remained determined to grind out a result in France. The hosts broke the deadlock in the 18th minute when Franck Sauzée connected on Rudi Völler’s cross and slammed a half-volley past Andy Moram in goal, but Rangers equalized after halftime via a goal from Ian Durrant. By the time referee Mario van der Ende blew the final whistle, the Glaswegians had found themselves tied on points with Marseille going into the final match, albeit behind on goal difference and away goals.

Whilst Rangers prepared to take on CSKA Moscow at Ibrox, Goethals’ side traveled to Brugge in need of a victory to guarantee progression to the Champions League Final. Two days before the match, a Marseille official transferred $311,000 via a Swiss account to a bank in Brussels, where an intermediary named Michel Tincler withdrew the cash and deposited it to an unidentified Belgian man. Tincler would later reveal that he was acting under the orders of Marseille financial director Alain Laroche.

Within two minutes, Marseille had taken the lead against Club Brugge. Fabien Barthez launched a long ball towards Völler, but the German striker lost his footing and coughed it up to Brugge left back Vital Borkelmans. Borkelmans took a bizarrely heavy touch, and the ball traveled to the nearby Jean-Marc Ferreri, who slid the ball past two Brugge defenders and into the path of Alen Bokšić.

Bokšić calmly slotted the opening goal past Dany Verlinden, who was far too slow to come off his line. The visitors failed to muster any real attacking threat over the following 90 minutes, and Marseille prevailed with a 1-0 victory. Rangers finished one point behind the group winners, whilst Marseille booked their ticket for Munich, where they would meet Arrigo Sacchi’s Milan.

In domestic competition, things were going rather swimmingly for Goethals’ men. After being eliminated from the Coupe de France at the quarterfinals stage, Marseille bounced back with a 4-1 home victory over Lille. It meant that four games — Valenciennes, Milan, Paris Saint-Germain, and Toulouse — stood between them and a historic league + Champions League double. If Marseille were to lose to Valenciennes and PSG, they would go into the final matchday level on points with Les Parisiens. On the other hand, if they managed to beat Valenciennes on May 20, they could seal the league title with a win or draw against PSG.

As the Olympians eyed a fifth consecutive league title, their owner braced for a new battle in the courtroom. Tapie’s business empire had become riddled with debt, mainly stemming from the $398 million in loans that he had acquired in order to complete the purchase of Adidas. He was forced to sell his stakes in La Vie Claire, the Donnay tennis racquet company, and the TF1 television network.

He had even tried to sell Adidas for $400 million, but the deal broke down after the buying company found serious problems inside the German sportswear manufacturer. Desperate to meet the loan repayment deadlines, Tapie sold his controlling share of Adidas for $370 million, or $30 million less than the price that he had negotiated seven months prior.

Tapie, who had been reinstated as Minister of Urban Affairs just seven months after resigning, claimed that he agreed to the sale in order to focus on his political career. The leaders of the conservative opposition, widely expected to take power in the upcoming elections, vowed to open an investigation, claiming that he had used state-run firms to bail himself out of trouble. “It’s immoral for big public enterprises to help their friends in power,” said François d’Aubert, leader of the center-right Union for French Democracy. “Would any other chief executive benefit from the same banking support?”

At that juncture in time, Tapie would have surely read the writing on the wall. He would have seen the buzzards circling over his Paris mansion, the storm clouds enveloping the Mediterranean’s horizon, the salivating hyenas baying for blood. He would have remembered the 1991 European Cup Final, when a spate of injuries prevented Goethals from fielding a full-strength team in Bari. He would have arrived at a crossroads that countless poker players had faced before him: to fold, or to throw all of the chips on the table. Tapie went all in.

Marseille’s squad arrived in the border town of Valenciennes for what seemed like a straightforward affair. Les Athéniens had only just returned to the top flight last summer, and they had teetered on the brink of relegation for the entirety of the campaign. On the other hand, Marseille came into the game as league leaders, having won 6 of their last 7 league matches by a combined scoreline of 19 to 4. Their red-hot form did little to comfort their owner, who refused to take any chances ahead of the most decisive week in club history. Rather than sit back and watch, Tapie called an audible.

Born in the southwestern village of Angoulême, Jean-Jacques Eydelie began his footballing career at Nantes, amassing 132 appearances for the club before joining Marseille in the summer of 1992. A holding midfielder by trade, Eydelie had established himself as a versatile squad player for Goethals, able to do a job on either flank as a wingback or provide defensive protection in the middle of the pitch. But on May 16, 1993, it wasn’t Goethals who was asking him to do a job; it was Tapie.

Four days before the Valenciennes match, Eydelie boarded the glamorous Phocéa for one of Tapie’s customary yacht parties. It was on this boat where Tapie informed him of his master plan. He told him to get in touch with two Valenciennes players, Christophe Robert and Jorge Burruchaga, and bribe them to ‘take it easy’ on Thursday. Eydelie had played with Robert and Burruchaga during their time at Nantes; if there was anyone capable of crossing over to the other side and soliciting the offer, it was him.

The plan was relayed over to Goethals, general manager Jean-Pierre Bernès, and a group of players who were on the yacht, such as Didier Deschamps and Marcel Desailly. “All the players knew that this match was going to be arranged, but it was Tapie who asked Eydelie if he could contact the Valenciennes players,” later recalled Bernès. “If we won in Valenciennes, the match against PSG wouldn’t be anything more than a friendly match and in addition, Mr. Tapie wanted us to avoid injuries before the Final.”

On the night before the match, Eydelie and Bernès placed a call to room 215 of hotel du Lac, where Robert, Burruchaga, and their teammate Jacques Glassmann were staying. In exchange for ‘taking their foot off the pedal’ and losing, each player would receive a cash envelope containing 200,000 francs. “Tomorrow, you have what? A one in ten chance of winning?” argued Bernès. “Do you prefer to lose with 200,000 francs in your pocket or zero?”

Robert and Burruchaga quickly agreed to the deal on the condition that 50% was paid up front; Glassman, however, was unconvinced. As Robert’s wife drove to the hotel parking lot to pick up the advance payment, Glassman confided in his significant other, Audrey: “I do not know what to do. If I don’t speak, I’ll curse myself. If I speak, no one will believe me.” Audrey, however, was more strident: “You have no choice. If you don’t say anything, it will backfire on you.”

Jacques Glassmann did not go to sleep on the night before the biggest match of his career. Instead, he paced around the hotel room, smoked cigarette after cigarette, and racked his brain for a clear-cut decision. By the time the sun rose in the north of France, Glassmann had made up his mind: he would speak.

After the morning training session, Glassmann informed his manager Boro Primorac of the proposal. Primorac relayed the information to Valenciennes president Michel Coencas, who barged into Robert’s hotel room and threatened to shoot his player in the knee if he didn’t tell the truth; Robert, however, denied the allegations.

As Tapie chatted with Valenciennes mayor Jean-Louis Borloo, the players took the field at the Stade Nungesser at 8:30 p.m. Marseille broke the deadlock in the 21st minute; Abedi Pelé raced down the right flank and fired a trivela cross into the box, Bokšić scored the follow-through after his initial effort was saved by Michel Pageaud. Two minutes later, Robert collapsed after a seemingly innocuous tackle from Éric Di Meco, and was promptly subbed off for Kálmán Kovács.

“Usually Jorge Burruchaga disputed everything, but that evening, not only did he not dispute anything, he asked others to be silent,” noted referee Jean-Marie Véniel in his match report. “Conversely, Jacques Glassmann ran around as if he was trying to prove something.”

Marseille held onto a slim 1-0 win, and sealed the title the following weekend with a 3-1 victory against Paris Saint-Germain. Valenciennes, on the other hand, were relegated to the second tier that same exact day, after losing to Saint-Étienne. However, trouble was afoot.