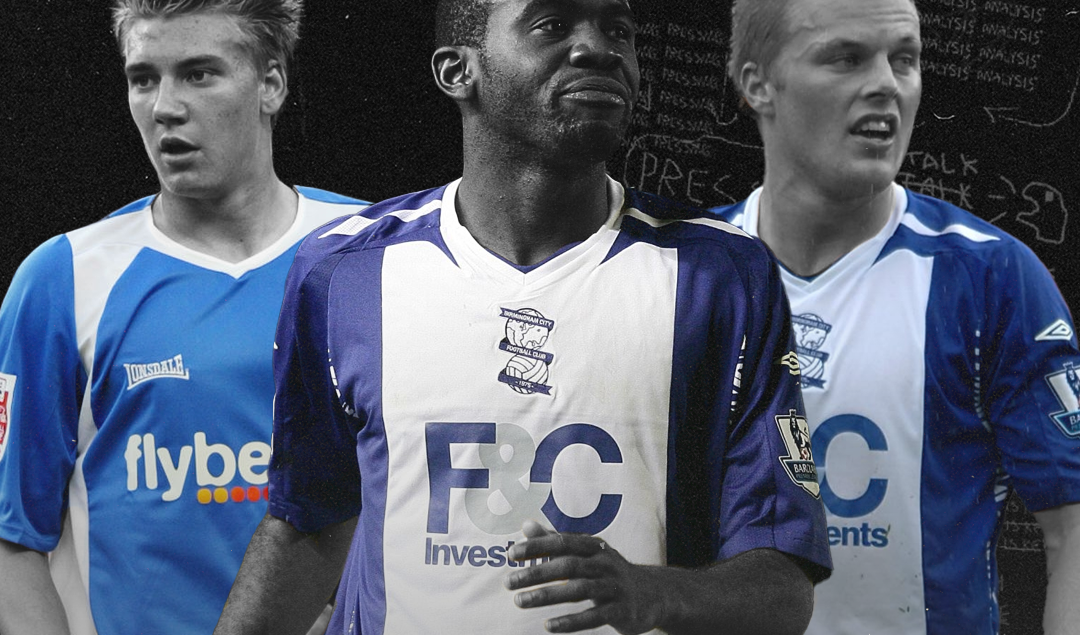 For many clubs, falling from established Premier League status to the Championship bears resemblance to the infamous story of when rapper Coolio dived into the crowd at a gig in Stoke-on-Trent only to be robbed and injured by those in attendance.

One moment, everyone below you is watching on in envy, merely standing and appreciating what is an untouchable presence in front of them; the next, absolutely anything goes as the star of the show and all the supremacy that they once held is gone in an instant.

As Birmingham slumped into this sudden, exposed state, some sensed the opportunity to steal their best assets, whilst the rest did everything in their power towards keeping them down at their level.

For Birmingham City, the summer of 2006 started with key players in Emile Heskey and Jermaine Pennant swiftly being sold to Premier League clubs as those around them strengthened, and with that, the idea of finishing in the top 1, 2, 3, 4 places was slowly slipping away.

On August 3rd and 4th – the two days directly leading up to the season’s opening day with pressure starting to mount – three loan signings in Fabrice Muamba, Sebastian Larsson and Nicklas Bendtner all from Arsenal enabled the Blues to set sail on a Fantastic Voyage. Even if the latter, just 18-years-old, had his sights set on living in a Gangsta’s Paradise of his own.

In his autobiography, Both Sides, Bendtner goes into detail about the wild lifestyle he adopted during his time in the East Midlands. The Dane admits he once lost £400,000 during one hour in a casino, had dated manager Steve Bruce’s daughter as a result of a bet with other members of the Birmingham squad and would also frequent the local strip club.

It certainly wasn’t what Bendtner needed as a teenager, as the reputation he has built since has only reinforced, but the teenager and his two Arsenal teammates were certainly what Bruce and Birmingham needed, and that quickly became apparent.

In the first game of the season at home to Colchester, Bendtner announced his St Andrews arrival in style, coming on from the bench to score the deciding goal in a 2-1 win ten minutes from time. Fast forward a month and the Blues had won all of their first three home games 2-1, with Bendtner scoring in all three, two of which were match-winners with the third decisive goal scored by Larsson.

Their start to life in blue and white could not have gone better, and on August 16th, with less than two weeks of Championship football under his belt, Bendtner would earn his first cap for Denmark as a result of his fantastic form.

Whilst the Scandinavians were stealing the spotlight, Muamba was quietly controlling games with the energy and excellent all-round ability he quickly became known for in midfield. All of a sudden, a slightly aging squad left somewhat short of the Premier League quality it once possessed was infused with some much-needed exuberance courtesy of the wondrous Arsene Wenger. From then on, this spark that ignited St Andrews rarely even flickered.

Five wins from seven saw Birmingham sitting top of the table in what appeared to be a seamless transition through relegation turmoil. The Heskey-shaped hole in the attack was plugged by Bendtner, who brought physicality, ferocious speed and a clinical nature in front of goal – a frightening combination for opposing defenders.

Furthermore, Pennant’s jinking runs and wicked end product became Larsson’s line of work in an instant. What looked like damning departures were soon a thing of the past.

The Making of Arsène Wenger

Alas, as September turned to October, Steve Bruce’s men suffered a switch in momentum which started, in the absence of Bendtner and Muamba, with a 2-2 draw at home to Ipswich. Their new firing front man would go on to miss another two of the next four matches as the Blues went winless in five, slumping to ninth in the league.

Was the absence of the recently debuted Danish international the sole explanation for the sudden dip in form? It’s difficult to suggest otherwise, especially considering that upon his return, Birmingham would go on to win 11 of their next 13 fixtures, scoring 18 in the last six games of that run (including four goals and three assists from Bendtner) to soar eight points clear at the top come Boxing Day. Problem emphatically solved.

Defensively, they were solid with veteran keeper Maik Taylor marshalling a dependable backline, but it was in possession, most crucially in transition where the Blues were an exhilarating watch.

Having a midfield containing Muamba and Larsson was an absolute dream for Steve Bruce; they were incessantly pressing off the ball, but they had the presence of mind to stay disciplined and come out on top of a physical battle when required.

With the ball, they were intelligent, tiring out their opponents with quick passing before exploding into life and unleashing the likes of Bendtner and Gary McSheffrey further up field.

It was a mismatch against most teams for the Arsenal trio, a medley of Premier League players to be, with or without Birmingham. But it was the blend of Blues’ experienced heads in Stephen Clemence, Radhi Jaidi and Andrew Cole among others that gave them the platform to perform and enabled their growth from boys to men.

Andy Cole: A Tale of Fiery Relationships, Injuries and One Fateful Afternoon at Upton Park

Everyone at the club quickly became aware of the talent at their disposal, it was glaringly obvious. However, as the season went on, it was the games where there weren’t yards of space or several teammates supporting every attack that moulded them as players and unveiled the ugly side to their game that is often required at the top level.

It was Bendtner holding the ball up and running the channels to allow his team to break out of their own half. It was Muamba covering full-backs to avoid overloads and dropping into the defence to find a yard of space and time to distribute the ball from deep. And it was Larsson winning every set piece he could, every second of respite for his side and running himself into the ground week in, week out.

Out of the last 17 games of the campaign, Birmingham would win eight of them by a single goal, and as you can imagine, it was far from pretty at times. But these fixtures that saw fans head home with a smile that was overshadowed by searing headaches and abnormal heart rates were made worthwhile by the little moments of magic that made the difference.

After losing consecutive matches to Burnley and Barnsley at the beginning of April, Birmingham found themselves in second place with Derby just two points behind with three games to go. Following the Rams’ 1-0 win at home to Luton on Friday, April 20th, the Blues would travel to Molineux on Sunday to face sixth-placed Wolves in a West Midlands derby where the pressure derived primarily from what was at stake rather than the rivalry.

For almost an hour, the tension was palpable throughout a placid affair before the tale of four phenomenal headers commenced. First, from a long goal kick, a Bendtner flick on sent Cole away to open the scoring before sprightly Wolves winger Michael McIndoe netted twice in four minutes to flip the game on its head. Entering into the final fifteen minutes, Steve Bruce was in need of a hero, and in Nicklas Bendtner, he had exactly that.

As the constant noise from the Wolves fans began to form an increasingly impenetrable cauldron of joy, Bendtner smashed through it with ease as the tide turned once more. The great Dane; provider of the first, became scorer of the second with a bullet near-post header from a corner.

Scott Twine: Primed for a Seamless Rise to the Top

The game was finely poised at 2-2 until 88 minutes, when Birmingham sliced through the Wolves defence to take a crucial lead. Only this time Bendtner wasn’t the hero, instead it was his strike partner Cameron Jerome, or so it seemed.

As the hosts piled on the pressure, McIndoe was presented with a chance to grab a hat-trick and the headlines from the penalty spot following a Bruno N’Gotty foul. But it was young ‘keeper Colin Doyle who made the all-important save to give Birmingham a famous three points.

The 21-year-old stopper took all the plaudits, but it was Bendtner’s brilliance that put them in a winning position once again. With two games to go, they remained two points clear.

For considerable stages of this campaign, there is no escaping the fact that it was the Bendtner show at St Andrews. The majority of fans loved him and rightfully so. But it’s time to take the spotlight from the electrifying frontman and appreciate his outstanding Scandinavian contemporary for a minute.

Sheffield Wednesday were the opponents for the penultimate game of the season, the last at St Andrews – a place that transformed into promotion-infused pandemonium even before kick-off. However, that excitement slowly evaporated as Brian Laws’ Owls set their stall out to spoil the party. The ever-rising stress levels exacerbated on the hour mark when the eager to please Muamba was sent off for a reckless challenge.

But as Wednesday pushed in pursuit of their own slender play-off hopes, Birmingham battled back before a goalkeeping error presented Jerome with an opportunity he was never going to squander. The stands shuddered in celebration as the Blues went ahead, if tears of happiness were trickling at this point, the flood gates were about to open in more than one metaphorical sense.

Two or three goals didn’t immediately follow, but one of this calibre was more than enough. As Larsson collected the ball in his own half, there wasn’t acres ahead of him or even many teammates, only two banks of four unsuspecting Wednesday players and little hope of creating anything noteworthy.

Nevertheless, after manoeuvring his way around the right side of the Wednesday midfield, the space started to open up behind the defence, who came out to close Larsson down only for him to skip past two and into the area before etching his name into Birmingham City folklore by firing the ball home.

Yet again, the Arsenal boys had raised the roof from St Andrews, bringing out a glisten in the otherwise riled, bright red expression on Steve Bruce’s face. Even when it mattered most, when their absolute best was required, they brought it. From the first minutes they arrived right until the moment Larsson sealed promotion, it was a move meant to be.

Although, perhaps with the exception of Bendtner, it never truly worked out for any of them at Arsenal, through the meticulous mentoring of Wenger and the maturity and industry taught by Bruce, not to mention the innate talent that all three possessed, each of them had developed the ingredients needed for a prolonged career in the Premier League and that year at Birmingham played a monumental role in their growth.

To this day, the Championship is a great vehicle for elite-level clubs to progress their youth, as seen with Manchester United’s Ethan Laird at Swansea and Chelsea’s Ian Maatsen at Coventry this campaign, but it’s highly unlikely we’ll ever see three players from one club have such an impact in the same season.