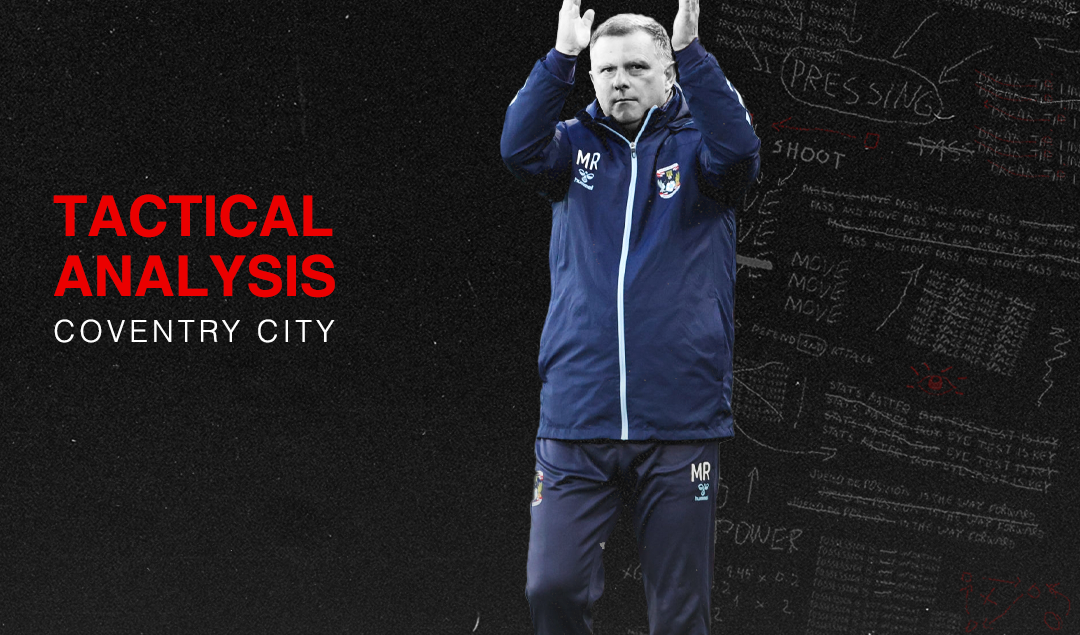 Heading into the 2021/22 Championship campaign, the vast majority of prediction tables were identical in personnel when it came to the teams expected to finish from 1st to 4th: Bournemouth, Fulham, West Brom and Sheffield United. But whilst the table’s top end is accurate for three of the league’s seemingly superior foursome 17 games into the season, there is a quite extraordinary anomaly that stands amongst them.

As Sheffield United continue to struggle for form, Stoke and QPR are two teams unsurprisingly sniffing around that fourth spot, but in Mark Robins’ Coventry City, the Championship has a beguiling dark horse, a wondrous wildcard that the division has become accustomed to over the years but never bored by, and their extraordinary start to the season has come much to the delight of a yo-yo club yawner like myself.

Having watched them throughout the season, there is no doubt that Coventry are deserving of a place in the playoffs as things stand, but considering those same pre-season predictors had the Sky Blues hovering around the relegation places, with some of the more adventurous punters among us placing them higher up the bottom half of the table, their form has been a shock, to say the least.

With nine wins from 17 and a +4 goal difference to boot, Coventry’s current standing looks nothing out of the ordinary on the surface, but delving deeper into their matches thus far unearths a catalogue of unique aspects that contribute to the success, and equally, the shortfalls of the team. Let’s get into those, starting in the comfort of their home, the Coventry Building Society Arena.

The return of fans to stadiums has been met with a universal sense of euphoria, even for fans of severely struggling clubs, but few have been treated quite like the Sky Blues supporters. Since the club returned to their old ground at the start of this season following a legal dispute with the rugby team and owners of the stadium, Wasps, which saw them ground-share Birmingham City’s St Andrews for two seasons, the homecoming has felt like a new signing in the same way that a key player returning from long-term injury does.

The fans have been typically outstanding in their support, and the team has most certainly repaid them for the times they spent trudging to a temporary residence. Seven wins, one draw, and one loss sees Mark Robins’ men boast the best home form in the division, but the nature of those wins suggests it has been far from plain-sailing.

In nine home games, Coventry have gone in at halftime trailing five times and leading just twice. Not to mention they’ve only scored three goals. In fact, this mirrors their away form as a whole, where they’ve won two and lost four of eight on the road, scoring six times and conceding 13. How the hell are they fourth in the table, you may ask.

Their fans must be thinking the same thing throughout at least half of their fixtures thus far, but no matter the opposition or the circumstance they find themselves in, it would be foolish to count Coventry out at the CBS Arena. Already this season, they have picked up 12 points from losing positions as hosts, scoring 16 of their 25 goals in the second half of home fixtures.

To put this into context, only Fulham and Bournemouth have scored more home goals altogether. Also, the Sky Blues are either equalling or bettering half of the teams in the league for overall points earned on home turf alone. It doesn’t come much better for the Coventry faithful, or so you’d think.

In victories over Nottingham Forest, Reading and most recently Bristol City, Coventry came from behind to score injury-time winners, even doing so with 10 men in the latter encounter. So what makes them such a difficult team to seal the deal against, and what is it that unleashes that beast in the dying embers of matches where hope is so nearly lost?

Inevitably, this pattern within their games is often attributed to slow starts, an inability to adapt to unforeseen elements of the early exchanges until Robins can exact significant change during the half-time break, but that isn’t the case.

There is a more measured approach to the first half that sees them try to dominate possession, building from the back and switching play frequently to wing-backs Ian Maatsen and Fankaty Dabo. As the game goes on, the aggressive starting position of Maatsen in particular invites teams to counter-press, and this aggressive tactic from wide gradually stretches the opposition as they look to intercept a loose pass and break, which plays right into Coventry’s hands.

From then on, the spaces begin to open up for Callum O’Hare in the number 10 role, and for striker Viktor Gyokeres to exploit the channels in behind opposing full-backs, and this enables them to play directly and vertically in order to get their most creative players on the ball in the positions where they are most effective.

With Ben Sheaf and Gus Hamer typically making up the midfield three in the 3-4-1-2 setup, they have a functional partnership that complements each other well in and out of possession. Hamer occupies the box-to-box role and is usually the aggressor in midfield battles whereas Sheaf likes to protect the defence, dropping deep to provide more attacking licence to Hamer and O’Hare before collecting the ball from the back three and distributing wide or through the lines.

Most importantly, however, their positional awareness of one another and coordinated pressure to shut off passing lanes and force teams to attack from wide areas is something that often goes unnoticed. Unless teams can expose the space behind Maatsen and Dabo, they are very difficult to break down with a well-drilled backline marshalled by veteran skipper Kyle McFadzean.

With that being said, it is those spaces in behind the wing-backs that when exploited, isolate the wide centre-backs, dragging them out of space to create gaps centrally where Coventry are usually undone. Teams with similarly assertive wide options in a three-back formation, such as Swansea’s Ethan Laird and Luton’s James Bree are those who have found the most joy against the Sky Blues.

In the 5-0 defeat at Luton in September, three of the Hatters’ four first half goals saw left centre-back Jake Clarke-Salter helplessly bypassed with Maatsen barely in the defensive picture. Although Maatsen’s aggressive, attacking style partnered with Clarke-Salter’s lack of pace over short distance has been a cause for concern, this high-octane strategy has produced high rewards at times.

As their late-game metamorphosis might suggest, what makes Coventry stand out is their increase in intensity and control as the game goes on, though their possession stats, especially at home, would say otherwise. In the first half, they average 55.4% possession, which drops to 48.7% in the second, but there is one specific example that epitomises their plan of action.

The lowest possession they have obtained in one half this campaign is 34% in the second half against Fulham, which also happens to be the only half in which they have scored four goals, coming back from 0-1 down to win 4-1. Coincidence? Most certainly not.

This half, as wild as it was, showed Coventry’s ability to take a mile when given an inch. In short periods of the game, the press was relentless, the passing was ferocious and the combination of urgency and efficiency in explosive bursts was very difficult to stop.

One minute, opponents are calmly sailing through the Sky Blues before the storm hits, lightning strikes again and again before suddenly, they’re submerged in a thunderous sea of blue spilling onto the pitch from the stands. These titanic turnarounds are becoming more of a habit than an accident for Mark Robins’ men, and the more it happens, the more you realise that these coincidences are actually calculated.

Man for man, Coventry are well-drilled, always wanting to win the ball out of possession and receive it when building from the back. Most importantly, however, they all trust one another and take risks, asking for the ball in crowded areas or making ambitious runs out wide, knowing that teammates will move accordingly to create the space and utilise them where a lack of cohesion would leave them isolated.

This is a system that has been refined for almost two years, and the personnel the club brought in this summer, such as Maatsen and the returning Sheaf and Gyokeres emphasises the trust in Robins’ philosophy. This is a squad full of young, hungry players that continue to improve and fight for each other week in, week out.

Their commitment and courage are certainly huge contributing factors to their success, but the confidence and composure they play with on the ball cannot be understated. Gyokeres is always on the move, making a nuisance of himself in wide areas to allow O’Hare room to push on and form an interchangeable front three with the second striker that is incisive and unpredictable in equal measure.

Both O’Hare and Gyokeres are in the league’s top 10 for dribbles completed and the top 15 for key passes, stats which are symbolic of their relationship, the space that the team creates for the duo and the quality with which they make use of it.

Aside from their two standouts, the variety of stats that were worthy of note speaks to their versatility as a team and their widespread individual contributions. Maatsen (51) has completed the most tackles in the league, with Dabo (34) also in the top 20.

Also, whilst they primarily like to play a short, crisp passing style, four of their players (McFadzean, Hamer, Maatsen and centre-back Dominic Hyam) are in the division’s top 40 for long passes completed, with McFadzean and Hamer in 9th and 18th respectively. It’s an all-action, incredibly well-rounded team from top to bottom.

With the exception of the aforementioned weakness, which highlights the over-zealous nature of their wing-backs, and therefore lends itself to the strength of the team’s setup anyway, this is a squad that is more than capable of springing many more surprises this season and sustaining a play-off push. If you haven’t had a chance to see them exceed expectations in an exhilarating fashion as of yet, don’t worry, there will be plenty more opportunities to do so.