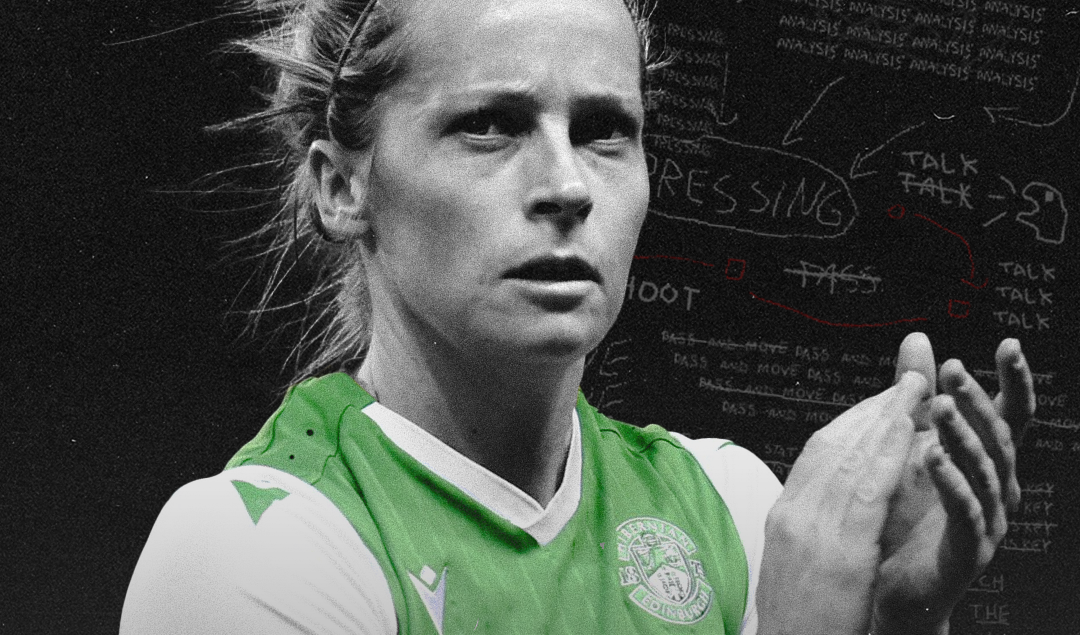 From the age of five, you’ve been a regular at Easter Road supporting Hibernian. What does the club mean to you?

I genuinely can’t sum up what the club means to me in one word or one sentence. It means absolutely everything and consumes every aspect of my life at this moment in time.  First and foremost, I’m a fan of the club. I’m also fortunate to be a footballer at the club and to also work for the club too.

The club is engrained in me and I love everything that the club stands for on and off the pitch. The motto ‘We are all Hibs’ resonates with me because I live and breathe Hibernian Football Club.

You make your debut for the club at 17 years of age. Was that literally a dream come true?

Absolutely. As a young girl, I never even thought playing football would be an option. I grew up in the borders and it felt like I was the only girl who was playing football in my area at that time. There wasn’t a lot of coverage or encouragement for young girls to see football as an option for them. So, to be able to join the club as a player and play for the club in front of my family, who are also Hibs daft, was a dream come true.

You’ve played at the club for the entirety of your career. How proud are you of representing the club that you love even to this day?

It makes me want to succeed even more. I’m a driven person who always wants success so the fact that I support the club helps me. It enhances my desire to want the very best for the club in everything that we do because it means so much to me.

You’ve won every domestic honour in the game while at Hibs. From your personal perspective, what are your favourite memories?

It’s overwhelming when I think about that because I honestly never thought it would an option for me. I am proud of the success that the club has had because everyone works as hard as they can to be successful. The 2016 Scottish Cup stands out for me because it came on the back of a very successful era for Glasgow City so to break that dominance was massive for us.

To top it off, the men’s side also won the Scottish Cup for the first time in over 100 years in 2016 so that summer was the perfect storm for me as a Hibs footballer and Hibs fan.

Another special memory was leading the team our at Easter Road against Bayern Munich in the Champions League. At the time, the crowd that night was a record attendance in Scottish football for women’s football so leading the team out in front of so many fans was an honour.

You are working with the club off the pitch as you mentioned earlier. Do you set targets in terms of how long you wish to continue playing for?

I’ve always said that I don’t want to hang around too long and become one of those players who isn’t contributing to the team. I want to ensure that my standards don’t drop and as long as my body allows me to do that then I have no plans to retire.

You made your Scotland international debut in 2007 and have over 40 caps for your country. How proud are you to have represented your county?

I’m very proud of playing for Scotland because there are so many talented Scottish players so to get one cap was such an honour for me. Having 48 caps is something that I don’t take for granted. I appreciate every single opportunity I’ve had to play for Scotland.

I’d love to get to 50 caps but I can’t be too disappointed with that because 48 caps is something that I have so much pride in.

You and your Scotland teammates qualified for two major tournaments. The men’s side haven’t played at a major tournament since 1998 so how does it feel to be one of the few Scots to represent the country on football’s biggest stage?

To achieve qualification for the Euro’s and the World Cup consecutively was an unbelievable achievement.  Being a member of both squads was massive for me because those squads made history for women’s football in Scotland.

How would you sum up the development of women’s football in Scotland during your career?

The transition and progress was long overdue. We used to get hand me downs in terms of kit when we played with the national team.  Now, we are treated on as close to a level playing field as we ever have been. That progression is vital because we have qualified for major tournaments when others haven’t. That’s not a criticism of any team at all. It’s just the reality of the last few years.

Our performances on the pitch merit the financial support to provide the best possible infrastructure for the women’s game in Scotland. The aim one day is to ensure full parity with our male counterparts but we are pleased with the progress so far. We are on the right track as a nation.

Who would you say are the best players you’ve played with so far?

Kim Little. I’ve played with her for club and country and you could tell from a young age that she was going to be a special talent. She has a fantastic low centre of gravity that enables her to dribble past players with ease.  Caroline Weir is another player who I played with for Hibs and for Scotland. She’s such a talent and a player who I enjoy watching for Scotland now.

Who would you say your toughest opponents have been so far?

I’d have to say Julie Fleeting. I played with her at Scotland but I played against her with Glasgow City. She could finish with ease and was a very strong footballer too.  Vivianne Miedema was such a talent as well. She was playing for Bayern Munich against us and her level of ability was incredible.

Last but not least, what advice would you give to young girls who want to become footballers?

Don’t get caught in everything that surrounds football. There are too many agents in women’s football at this moment in Scotland. I don’t believe we need them at our level and I believe many players are getting the wrong advice as a result of that.

Concentrate on your football and make footballing decisions rather than financial decisions. Follow your heart and be true to yourself because it is a short career but also such an enjoyable career also.