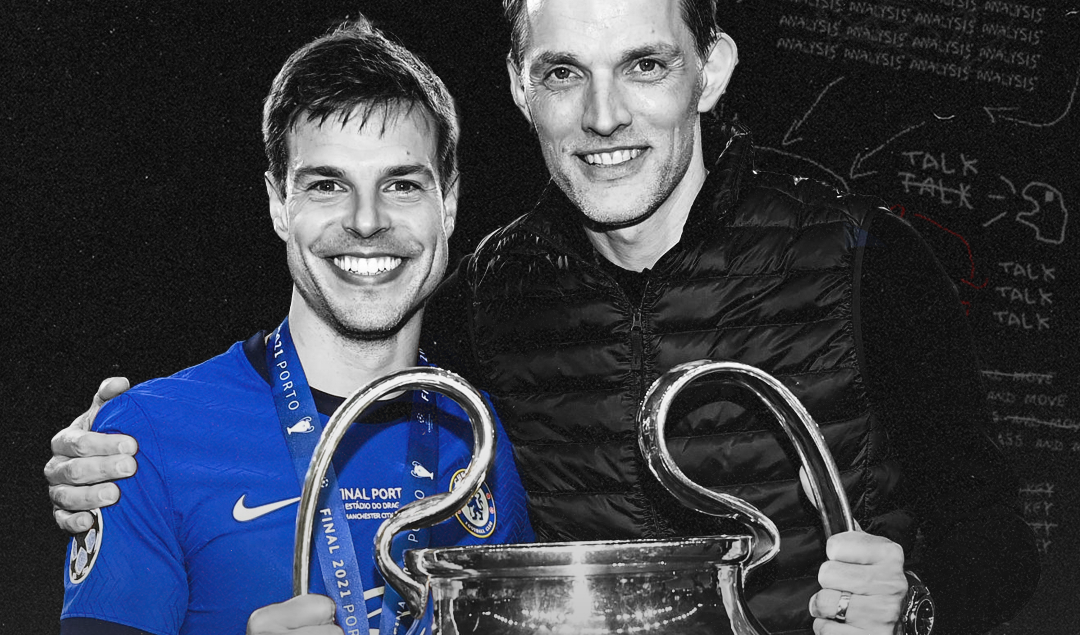 Amidst all the drama in the January transfer window, especially late on towards the dying week of it, Chelsea stood still. No business done for the senior team, no additions that could potentially aid a team that Thomas Tuchel stated time and time again that he was worried about due to the congested fixture list.

Consistent moans were heard as fans appealed to the board to “back Tuchel” and yet in a way..they did. I am one of a few fans who actually preferred that Chelsea did not force a signing just for the sake of it, but there are obviously two sides to the spectrum and that is what I intend to look at in this piece and what it might spell for Tuchel in the bigger picture.

To start off, I feel we need to take a good hard look at the various different factors and take them into consideration when it comes to this January and the Chelsea squad as a whole. As stated before, the Blues hierarchy bet a lot on the forwards picking up steam after their first season at the club.

Chelsea – When and How Will Stability Be Achieved?

Largely due to that lies one of the problems. Towards deadline day all the talk surrounded Ousmane Dembele and a potential arrival at the club. However, the side already had a staggering number of attacking options and had also recalled Kenedy after he was not getting much game time at Flamengo.

Whilst, obvious frustration may occur in some fans’ minds you have to realize that reports had already come out about disgruntled players on top of the obvious financial factor that needs to be accounted for.

Although a potential arrival of Dembele would have likely seen Chelsea improve the chances of more tension in the dressing room on top of a tight financial “mix-up” were big.

You then move on to the wing-backs. A vital cog was put into the rolling Blues chariot when Ben Chilwell went down with an ACL injury. Just as important Reece James went off with a muscle fiber tear v Brighton at the end of 2021.

Suddenly the width, sharpness, and fluidity that the side showcased diminished as Marcos Alonso and Cesar Azpilicueta were deployed. Immediately we saw shouts filled with desire for at least one person to fill in the gap left by the two Englishmen.

The name of Lucas Digne was thrown around, rightfully so, as he had fallen out with then Everton manager Rafael Benitez and was on the market. Sergino Dest was linked with the club, as well. Adama Traore was also mentioned. Yet Chelsea opted for one thing albeit to no avail – recalling Emerson.

Eyebrows were lifted when the first report came out that there were attempts of recalling the player despite him having no such option – meaning the side had to try and agree on a compensation fee with Lyon.

People laughed it off but in the weeks that followed it was revealed that Tuchel specifically asked for Emerson for a host of reasons. On the one hand, Emerson was familiar with the system that Tuchel employed and was also a little more comfortable at playing as a pure full-back compared to Alonso.

Tuchel also didn’t like the idea of signing Digne, especially on a permanent deal and Adama Traore didn’t fancy playing the wing-back role as he also rejected Antonio Conte’s Spurs later on in the month for that same reason.

In a way, Chelsea’s board opted to trust Tuchel’s judgment and appease him by trying to bring in Emerson. And while their attempts brought no success Tuchel switched up his side deploying Malang Sarr at the full-back position out of need.

Don’t get me wrong, Sarr has played great since being featured but he is far from the player you’d want to see at that spot in a derby v Tottenham. And yet the Frenchman did his job almost to perfection in what is an unorthodox position for him.

A lot of emphasis was put on “the need for competition”…yet the side would have had 5 senior LBs on the side with any player coming in that was not named Emerson.

This meant that a board that had already struggled to shift certain players in that role on a permanent basis would have to deal with that again this summer on top of having yet another left-sided player.

With the emergence of Sarr, the lack of any clear cut easy target that the club could acquire[that also appeased Tuchel] and the fact that the position was once again going to be stacked in the summer of 2022 meant that a move for a LWB/LB wasn’t viable or at least not for Chelsea.

The RWB/RB spot was basically more of the same. Chelsea had the option of recalling Dujon Sterling which would effectively see him get less game time when he’s been starting at Blackpool for the majority of games [following some injury issues that have troubled his career].

Traore as mentioned earlier didn’t like the idea of playing in the position and the last option was Dest. Don’t get me wrong, there is a player there. You don’t get to a position where Bayern and Barcelona want your services but is he really ready for this Chelsea side especially at the cost he warranted? He’s not managed to make his mark in a struggling Barcelona squad so how would he fare at Chelsea.

Fair enough, the Blues did get lucky with James potentially recovering ahead of schedule and yes, Azpilicueta has obviously not had the best of times but it still doesn’t make sense to go beyond Tuchel and opt for a player who’d either not be his preferred option, add to a bloated squad even more and also cost money that would potentially be needed in the summer whilst not being as effective as needed… Chelsea has such an issue already.

Outgoings were also put into question. The side really does have a huge squad on their books. Multiple loanees and some players that are currently with the senior squad have been earmarked for departure for years now, the likes of Ross Barkley and Alonso and even Ruben Loftus-Cheek being the particular targets of those discussions.

However, you have to look at it in a different light. Barring the obvious issue which is the huge wages that all three pocket individually which proves to be a stumbling block for moves for quite some time now, there is also the issue of depth.

Up until a month ago Chelsea’s only fit pure central midfielder was indeed Loftus-Cheek. After Chilwell’s injury, the only viable option for the LWB spot is Alonso.

Even if they split opinions and aren’t ideal options they are still very much needed in times where one day you may have everyone fit and the next you have 6-7 cases of COVID and you are forced to alter game plans completely.

Don’t get me wrong, this is far from a praise piece where now it’s time to fire away countless congratulations to the board and scouting department.

Chelsea does have glaring issues when it comes to recruitment and departures which are really complex. Largely because Tuchel is now the 6th manager [including Guus Hiddink but still] in the last 9 years and every single one of those has brought in different players that suit a different philosophy and are different profiles.

On top of that Chelsea have struggled in getting rid of said players often asking for high prices or rejecting the appeal of clubs to subsidize part of the players’ high salary. And I understand that too, part of the process which makes you a successful business, especially in football is not to create bad precedents.

If Chelsea were to start selling players at lower prices clubs would quickly realize that they are desperate to offload them and have the upper hand but is that really so bad at this point? With players that have been on the books for quite some time and impacting the above-mentioned finances for yet another year? Not really.

You can go back to Fernando Torres, who already had major knee issues and showcased a huge drop in form, when Sergio Aguero was available or a little closer to nowadays when Ross Barkley was signed in January despite already struggling with injuries and no longer being the player he was once touted to be.

Fast forward to today and he is being hounded out of the club by almost every single fan while, as mentioned, his wage sees clubs being put off from making any significant move for him.

Frank Lampard’s first season in charge saw him push for Hakim Ziyech in January [revealed at a later date] and although it didn’t happen the club did eventually get Frank his man.

Long-term targets that fit Tuchel’s profile wouldn’t have been available in January and while there were shouts of pre-agreements it’s highly doubtful that someone like a Declan Rice or an Aurelien Tchouameni [or their clubs for that matter] who garnish interest from a host of top clubs, would just blindly agree to a move to Chelsea right now or for the summer, especially when their clubs are battling for certain objectives and that may affect their motivation and approach towards games.

The Evolution of Declan Rice

The higher-ups have a lot on their hands, that is without question. Judging by reports of various journalists they’ve banked a lot on making the right calls this summer and finally trimming down the squad as the new loan rules are put into place but also because certain people that they want off the books are in the last year of their respective contracts.

In a way, up until this point, for good or bad Tuchel has been backed. He’s been given Saul over Tchouameni even if that might have been a mistake, as he wanted someone with experience.

He also wanted a striker and the club went out and spent a club-record fee to bring in Romelu Lukaku.

And even if the side hasn’t really made any more significant moves because of certain predicaments it isn’t just solely down to this January but rather an ongoing issue that has troubled the Blues for quite some time now.

It seems as if Tuchel’s well-liked by the people up top who’ve earmarked him to see this potential overhaul.

Yes, that was the same role that was given to Lampard a year and a half ago when the club went out and spent 250 million pounds for players which in a way spelled the beginning of that process but when Lampard ostracized certain players it led to the usual problems in the dressing room and his eventual downfall.

However, Tuchel has managed to keep squad cohesion levels up whilst also managing the club’s second Champions League victory. Yes, the Premier League might be far off, but it seems the German will be tasked to transition into a new era that the club wants to go ahead with.

While we’ve been here time and time again it seems as if there is an understanding between board and manager so much so that fans should remain optimistic instead of going into meltdown mode. Time will tell just how much that optimism can hold but the signs are there.