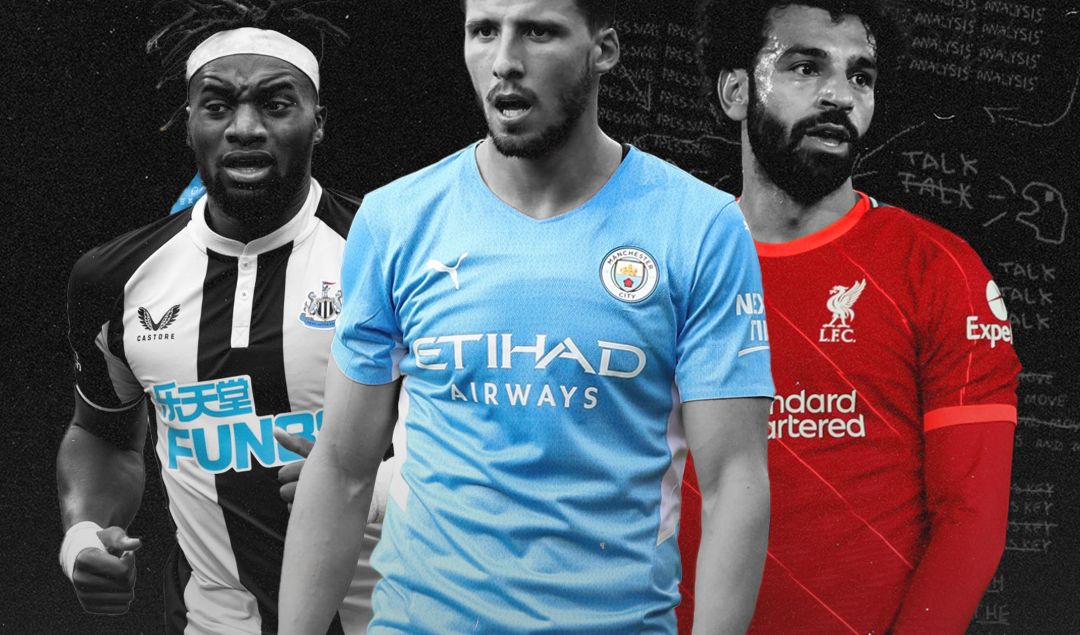 After an action-filled weekend of storylines and last-minute drama, the Premier League is back for Matchday 6 of the 2021/22 campaign. The weekend kicks off on Saturday with a juicy double-header, as Manchester United host Aston Villa, whilst Manchester City pay a visit to Stamford Bridge.

The Red Devils maintained their historic record of 29 unbeaten away matches against West Ham, with Cristiano Ronaldo quickly canceling out Saïd Benrahma’s opening goal. When the match looked headed for a draw, Jesse Lingard made amends for his catastrophic error against Young Boys and scored the go-ahead goal in the 89th minute, punishing his former side and perhaps making them regret not signing him on a permanent deal after his sensational loan spell.

After having a penalty shout denied, United soon conceded a penalty in the 93rd minute as Luke Shaw handled Andriy Yarmolenko’s cross in the box, prompting David Moyes to bring on captain Mark Noble for what would be his only kick of the match, but the 34-year-old’s tepid effort was saved by David De Gea. The Hammers needed just three days to avenge the result, however, as an early goal from Manuel Lanzini sent United packing from the EFL Cup and gave Moyes his first victory at Old Trafford since being sacked by the club in 2014.

Aston Villa bounced back from their loss to Chelsea and defeated Everton 3-0 in a victory that saw Matty Cash and Leon Bailey grab their first goals for the Villans. Whilst Douglas Luiz delivered a masterful performance in the heart of midfield, it was Bailey who stole the show on his home debut, coming off the bench and leading Villa’s second-half onslaught before coming off after 21 minutes.

The Jamaican winger is a doubt for the United match with a quad injury and was unavailable in the midweek fixture which saw Villa draw 1-1 to Chelsea at Stamford Bridge and lose 4-3 on penalties. Thomas Tuchel went with a heavily rotated side on Wednesday, with Ruben Loftus-Cheek and Timo Werner impressing in a rare starting opportunity for both players.

In comparison, Manchester City thrashed Wycombe Wanderers 6-1 as a mix of academy youngsters and established stars such as Riyad Mahrez and Kevin De Bruyne blazed past the Chairboys. Pep Guardiola faces a dilemma in the heart of defense with John Stones and Aymeric Laporte unavailable, whilst Ilkay Gundogan, Oleksandr Zinchenko and Rodri are in a race against time to be fit.

Edouard Mendy has missed the past two games with a knock but will likely regain his starting spot ahead of Kepa Arrizabalaga, whilst Christian Pulisic remains a doubt with an ankle injury. Since replacing Frank Lampard as Chelsea manager, Thomas Tuchel has maintained a perfect record over the Citizens, beating them in the FA Cup semifinal, the Premier League, and the Champions League Final, and he’ll be looking to continue that spotless form on Saturday.

City, however, have won three of their last six visits to the Bridge in the Premier League, and whilst their recent draw against Southampton has certainly drawn questions about their lack of goalscoring prowess in the box, they have the quality to defeat any team in world football and will be looking to hand the Blues their first defeat since May 23. Only a win can put them level on points with Chelsea, currently atop the league table and tied with Liverpool and Manchester United at 13 points.

Moving forward, we feast on a tasty lunchtime fixture that will see Norwich City face off against Everton. After an impressive run of form under Rafa Benítez, the Toffees have had a hiccup in form, losing 3-0 to Aston Villa and crashing out of the EFL Cup on penalties to QPR. Injuries and suspensions have taken their toll on Everton’s thin squad, with Lucas Digne, Dominic Calvert-Lewin, Richarlison and Jordan Pickford set to miss out on the action.

After suffering a 3-1 defeat to Watford, Norwich City were thrashed 0-3 to Liverpool in the EFL Cup. They have not picked up a point in the Premier League since February 28, 2020, although their last away victory in the league came on November 23, 2019 at Goodison Park. If they are to snatch the three points at Goodison this time, they’ll need a vastly improved defensive organization and attacking firepower from their poor start to the campaign.

The Canaries have scored twice and conceded 14 in their first five matches, and Premier League odds have them as -275 to be relegated and +163 to finish bottom. Whilst Everton will not have their entire firepower on display, they’ll be counting on another brilliant performance from Demarai Gray to carry them to victory, who has emerged as a key player since arriving from Bayer Leverkusen.

It has been a disappointing September for Leicester City, who have lost consecutive league matches to Manchester City and Brighton and allowed a two-goal lead to Napoli to slip away, but after beating Millwall in midweek action, they will be looking to pick up their first win in a month against Burnley. The Clarets, on the other hand, have only won twice this season — both of them being EFL Cup fixtures — and they’ll attempt to dig themselves out of the relegation zone with a win at King Power Stadium.

Hovering above Burnley by just a point are Newcastle United, who clawed their way to a draw against Leeds United thanks to the individual brilliance of Allan Saint-Maximin. The Magpies have conceded the most goals (13) in the league after Norwich, and they have only beaten Watford once in their last 10 meetings. With Joe Willock’s fitness being a major doubt, Steve Bruce’s side will be up against it as they attempt to sink the Hornets at Vicarage Road.

Leeds United find themselves one point above the drop at the moment and will be looking to pick up their first league win of the season against West Ham. Marcelo Bielsa’s side have been ravaged by injuries and currently have 13 senior players available, and after edging Fulham on penalties on Tuesday, they’ll be hosting the Hammers at Elland Road and will be looking to defeat the East London outfit for the first time since 2005.

Saturday’s action draws to a conclusion as Brentford host Liverpool in a match that will see Sergi Canos face off against his former side. The Bees enter the match in red-hot form after defeating Wolves at Molineux and smashing Oldham Athletic 7-0 thanks to a poker from Marcus Forss and a brace from new signing Yoane Wissa, but going up against Jurgen Klopp’s well-oiled machine is a different battle entirely.

Thiago Alcantara and Naby Keita will be unavailable for the trip to London, although Klopp will be able to count on Trent Alexander-Arnold, James Milner and likely Roberto Firmino for the match against Brentford. Expect to see some form of rotation as the German manager attempts to keep his squad fit and fresh ahead of a week that will see them travel to Porto and host Manchester City before the next international break.

Wolves travel to St. Mary’s Stadium on Sunday and will be looking to brush off a shaky start to life under Bruno Lage that has seen them bounced out of the EFL Cup by Tottenham and lose to Leicester City, Tottenham, Manchester United and Brentford in the league. Southampton, on the other hand, have not won in the league thus far, but have nevertheless managed a solid if unimpressive start that sees them one point above Wolves.

Ralph Hasenhuttl’s side have drawn four consecutive matches since losing to Everton on opening day, taking points from Manchester United, Newcastle, West Ham and Manchester City and narrowly edging Sheffield United on penalties. With Stuart Armstrong and Jack Stephens unavailable due to injury, expect Mohammed Salisu to partner Jan Bednarek at the back and Mohamed Elyounoussi to retain his spot in midfield ahead of Nathan Tella and Moussa Djenepo.

Arsenal host Tottenham in the first North London Derby of the season, and they come into the fixture on the back of an impressive run of form that has seen them defeat Norwich City, Burnley and AFC Wimbeldon. Mikel Arteta will be hoping that Kieran Tierney has made a swift recovery after being forced off against Burnley due to a cramp, whilst Nuno Espirito Santo could be without Lucas Moura, Steven Bergwijn and Ryan Sessegnon due to injury.

The Gunners have shaken off an awful start and reaped the benefits of Arteta’s new-look 4-3-3, but it’s also true that they haven’t managed to beat a top-quality opponent. Spurs enter the fixture in the opposite momentum; after topping the league table, they have lost back-to-back matches against Crystal Palace and Chelsea, and with both sides struggling to finish chances in the final third, this could be a low-scoring affair.

The North London Derby is followed by the ‘M23 Derby’ as Crystal Palace host Brighton at Selhurst Park. The Eagles’ three-match unbeaten run came to an end with a resounding 0-3 loss to Liverpool last weekend, and Patrick Vieira’s side face an uphill task to defeat Graham Potter’s high-flying Seagulls, who sit fourth in the Premier League at the moment.

Brighton have enjoyed a sensational month so far, brushing past Brentford and Leicester City and downing Swansea City in the EFL Cup via a brace from Aaron Connolly. However, with Adam Webster unavailable due to a hamstring injury, and Yves Bissouma, Pascal Gross, and Enock Mwepu questionable to return, Potter’s side could equally have a difficult job of taking points from Palace at home, who have won two and drawn two in their last four league meetings with the Seagulls.