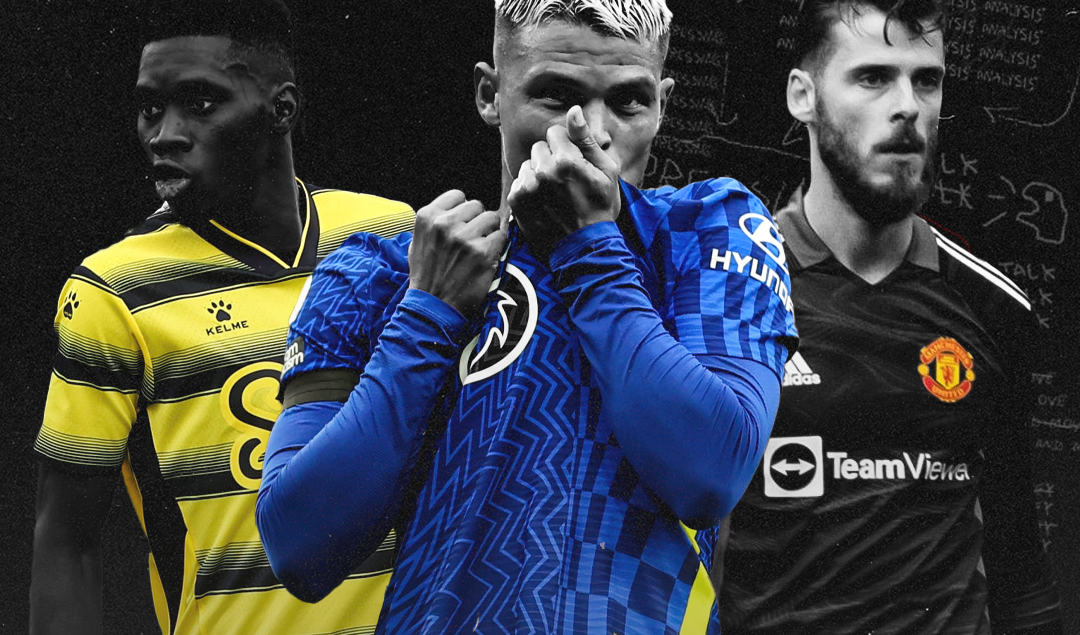 It was a Hollywood weekend of football in the Premier League on Matchday 5. David De Gea played the protagonist in “The Revenant,” saving a last-minute penalty from Mark Noble, who came on just seconds before to take the spot-kick ahead of a cacophonous London Stadium. It would be the only touch that the Hammers captain would make in the game.

In the south of England, Brighton’s Neal Maupay and Danny Welbeck recreated “Once Upon a Time in Hollywood,” two strikers who, after a disappointing 2020/21 campaign and various high-profile misses, are finally living in harmony in Graham Potter’s attack. Thomas Tuchel took the lead role in “The Greatest Showman,” retouching the script and allowing his team to go from villains to heroes in Tottenham Hotspur Stadium.

Without any further ado, let’s take a look at the best performers from Matchday 5. Warning: this team continues a striker who has drawn comparisons to Didier Drogba, the most entertaining footballer in the entire league, two fullbacks who are thriving in the final third, and plenty more in a flat 4-4-2 formation.

If Manchester United has maintained its historic record of 29 unbeaten away matches in a row, it is thanks to the oft-criticized and underappreciated David de Gea. He only made three saves, but saved the Red Devils from conceding nearly 1.64 xG (according to StatsBomb and its PostShot xG metric). After Luke Shaw handled the ball in his own box, the Spaniard stepped up to the task and saved Noble’s penalty to allow United to take three points back to Manchester.

Holding Manchester City to one shot on goal in 90 minutes of play is something that almost no team achieves, and for that reason, Tino Livramento slots into the right side of our back four, whilst Kyle Walker-Peters takes up the position on the left. The two delivered stellar performances in Ralph Hasenhuttl’s defense alongside Jack Stephens (who left the match in the 37th minute due to injury and was replaced by Mohammed Salisu) and Jan Bednarek.

After rejecting a contract extension at his boyhood club, the reigning Chelsea Academy Player of the Year elected to depart Stamford Bridge and join Southampton on a five-year contract in search of more playing time. Livramento has become a revelation on the right side of defense at St. Mary’s Stadium, and whilst he was not as involved in attack as usual, completing just 16 passes, he helped reduce Jack Grealish’s influence with five interceptions, six recoveries, and six duels won.

Walker-Peters joined Southampton on a permanent deal from Tottenham in August 2020, and while he has been forced out of his natural position of right back with Livramento’s arrival, he has alternated with summer signing Romain Perraud in the left side of defense and got the nod at the Etihad. He didn’t let Hasenhuttl down and helped shut down Gabriel Jesus after the Brazilian’s superb performance against Norwich, with Jesus eventually being subbed off for Riyad Mahrez who also struggled to conjure up his usual magic.

Thiago Silva is the first inclusion from the reigning European champions, filling in at the center of defense after another world-class display from the 37-year-old. He did not have to deal with a quantity of attacking opportunities so much as he did with quality of chances; Nuno Espírito Santo set his team up in order to isolate Heung-min Son against him, and the South Korean forward failed to get past him at any occasion.

What’s more, Son struggled to provide a reference point in Spurs’ build-up because Silva’s world-class anticipation saw the talisman struggle to deliver in a central role. The Brazilian veteran gave the Blues the lead after halftime, rising above Dele Alli, connecting onto Marcos Alonso’s corner, and heading it home towards the bottom right corner of the net where Hugo Lloris had no chance.

Each Premier League Side’s Signing of the Summer

Partnering Silva is another legendary center back in Virgil van Dijk. After an impressive 3-0 win against Tottenham, Crystal Palace were held to just two shots on goal as Van Dijk and new signing Ibrahima Konaté kept Christian Benteke, Jordan Ayew and Wilfried Zaha subdued. Van Dijk nearly grabbed a goal after deflecting a corner from Konstantinos Tsimikas, but the header instead fell to Mohamed Salah who doubled the lead from close range.

Van Dijk did not lose a single ground duel, something we have grown accustomed to, winning 7 out of 7 ground duels and 7 out of 7 aerial duels. He helped spring Liverpool’s attacks into life by maneuvering out of Palace’s pressure with his excellent changes of direction and picking out players in dangerous positions with pinpoint passes, completing four out of five long balls. The Reds find themselves level on points with Manchester United and Chelsea atop the Premier League and will look to continue that form against Brentford on Saturday.

Moving further up the pitch, our double pivot consists of Douglas Luiz and N’Golo Kanté. Aston Villa’s midfield was weakened after John McGinn suffered a hit to the face early on and was later subbed off for Marvelous Nakamba, but Luiz nevertheless took the keys at the center of the pitch and kept Abdoulaye Doucouré and Allan under wraps.

The Brazilian orchestrated Villa’s attacks and set up the opening goal with a glorious first touch to put Matty Cash in front of Asmir Begović and slot home the opener. Villa would go on to take a 3-0 victory against a weakened Everton side, picking up their first league win since August 21 to move up to 10th place in the league and bounce back after their disappointing loss to Chelsea.

After sitting out the past three games with a groin injury, Kanté came off the bench at halftime for Mason Mount and made an immediate impact, serving as an antidote against Tottenham’s pressure, attacking the half-spaces, and serving as an extra man in Chelsea’s build-up. Spurs were forced to be more vigilant with the Frenchman receiving between the lines and in turn allowing his teammates more space to maneuver the pressure.

He doubled Chelsea’s lead with a low strike from 25 yards out that took a cruel deflection off Eric Dier, and proved why he is absolutely vital to the defending European champions. Unlike Maurizio Sarri, Frank Lampard, Didier Deschamps and his other previous managers, Thomas Tuchel has taken meticulous care to rotate Kanté and preserve him, ensuring that even at 30, he remains as effective as ever.

Despite suffering relegation with Watford, Ismaïla Sarr found himself the object of interest from various Premier League sides last summer with Liverpool and Manchester United closely following the Senegalese forward and Crystal Palace lodging a bid of £25 million. The Hornets, however, held out for an asking price of £40 million and ended up keeping Sarr, who scored 13 goals and 10 assists to lead them back to England’s top flight.

Going up against Norwich City, who like Watford, immediately bounced back to the Premier League after suffering relegation in 2019/20, Sarr feasted on the Canaries’ leaky defense at Carrow Road. The first goal saw him lose his marker and attack the near post to put Watford back in front after Teemu Pukki’s equalizer, whilst the second saw him capitalize on Tim Krul’s initial save and seal the victory.

Sarr generated 1.2 xG, created two goal-scoring opportunities and successfully completed six out of six dribbles. At 23 years of age, it is clear that the Senegalese winger is destined for bigger things, but with a contract until 2024, Watford fans will certainly enjoy him while he is there in the outskirts of London.

Marc Cucurella takes up the position on the left flank of the 4-4-2 after a stellar performance against Leicester City. Whether playing as a left back, a left-sided midfielder, or a left winger, Cucurella has impressed under Graham Potter since arriving from Getafe, with the freedom to provide width and verticality in the wide areas.

The Spaniard offers plenty of guarantees for Brighton, with the ability to pick out his teammates in dangerous areas (completing 3 out of 5 long balls), and excelled against the Foxes with 3/6 dribbles completed, 37 carries (4 of those being progressive carries) and winning 7 duels. He made 5 clearances, did not lose a single aerial duel, and recovered possession six times, more proof that he is not just an offensive tool but a defensive weapon as well.

Is there a technically superior player than Allan Saint-Maximin? Perhaps. Is there a more fun player to watch than Allan Saint-Maximin? I would dare to say no. Similarly to Vinícius Júnior at Real Madrid, the Frenchman is finally adding consistent end-product to his thrilling performances in attack, putting shots on target and marrying his close control with an improved decision-making.

He is no longer playing for himself; he is playing for the team. With two key passes, one out of one cross completed, and a superb golazo to level the scoring after Raphinha’s opener for Leeds United, Saint-Maximin already has two goals — one less than his total last season in the Premier League. If he continues his excellent form and his newly mature performances, Newcastle United might just have enough in the tank to stave off the drop.

We close out this team with an ex Newcastle striker who has soared through the English footballing pyramid. Ivan Toney was playing in League One two years ago, and the next year he broke the record for most goals in a single Championship season. In a performance that harkened comparisons of a prime Didier Drogba, Toney delivered a superb display with his back to goal, offering a quick passing option and also serving as a reference point whenever Brentford players attempted to play long balls into the final third.

With his vision, hold-up play and awareness, he often resembled a central midfielder at times, and after putting the Bees ahead with an early penalty, Toney left Max Kilman in his dust and set up Bryan Mbuemo with a pinpoint cross, who made no mistake with the tap-in finish. Facing off against Toney in a physical duel is a losing battle, just ask Kilman, Roman Saïss or Conor Coady.