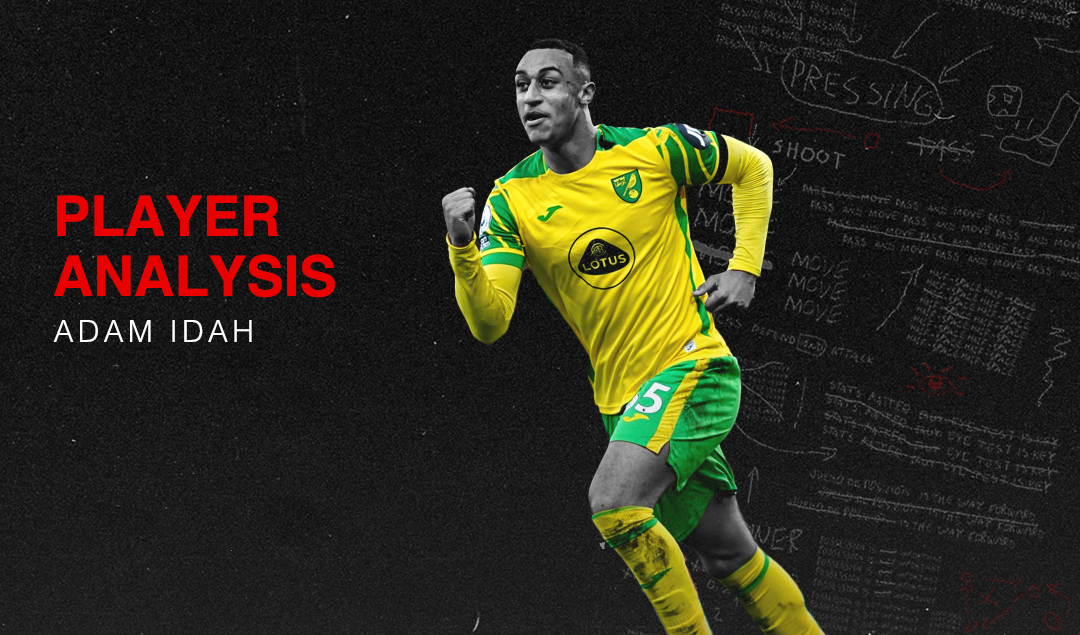 With Norwich City blunt in front of goal so far this campaign – eight goals scored in 20 matches before the visit of Everton to Carrow Road – Adam Idah must have felt the pressure to start delivering goals for Dean Smith’s strugglers.

Plunged into the deep end in some games this campaign, Crystal Palace away sticking out, Idah has looked a bit lost and isolated. Now, in a front two with Norwich’s main source of goals in Teemu Pukki, Idah has the quality around him to get crucial goals.

His strike against Everton epitomises the Irishman’s strengths – running in the gap between the two defenders, creating that space before finishing the opportunity.

Scrambling it in to make it 2-0 on the day, Idah’s first-ever strike in the Premier League, Norwich fans will hope he can have a purple patch alongside his teammates to steer Dean Smith’s Canaries to safety.

Idah’s off-the-post attempt at West Ham showcases a daring striker, a player willing to take risks. In a Norwich side scared to impose themselves in certain contests this season, he could well be an effective player in the months to come.

Mathias Normann: A Story of Talent, Impact and Injury

How did the Cork-born striker first come onto the radar in Norfolk? Idah played for his local side College Corinthians for a number of years, with the likes of David Meyler also playing for the Cork-based side before going on to feature in the Republic of Ireland international set-up.

Whilst still kicking about in Ireland as a 15-year-old, Idah would feature for various Republic of Ireland youth teams. He would make his mark in the U17 fold, scoring an impressive 14 goals in just 22 international caps at youth level.

His U17 goal-scoring exploits would see him go from College Corinthians to Norwich City, putting pen to paper to a move to Norfolk. Some distance from home comforts, the promise of Premier League football at youth level to further his ability would have been the ultimate factor in relocating over to England.

The goal-scoring exploits that saw Norwich sign him as an Academy scholar continued, scoring nine in 15 for Norwich’s U18’s in his first season before becoming a regular goal-scorer in the Norwich U23 set-up in the Premier League 2.

All of this hype at youth level even attracted interest from Jose Mourinho, citing Idah as a potential transfer target during his time at Manchester United. It led to Idah signing a first-team contract with the Canaries, even featuring in Norwich’s pre-season matches out in Germany with Daniel Farke clearly taking to the 18-year-old at the time.

The goal record in his youth days – the blistering form that saw him rise to the periphery of the first team – hasn’t quite translated into any consistent form in senior football so far for Idah. It’s one thing being able to score goal after goal at U23 level, it’s all about continuing that rich vein of form in the senior set-up.

Billy Gilmour’s Rise to Stardom for Scotland and Chelsea

In defence of Idah, Norwich City’s 19-20 season saw The Canaries struggle once more in trying to prove they’re worthy of sticking around with the big guns in the top flight. Farke used the Irishman sparingly in that season, not at fault in the slightest for Norwich’s pitiful bottom of the table finish.

If anything, with Idah still in his adolescence, he should have been loaned out instead of substituted on to try and make an impact in the top flight in such a poor season for Farke’s men.

Away from Norwich’s disastrous campaign that season, Idah did make an impact in the cup competitions. The attributes that made him such a ruthless striker at various youth levels shone in the Cup matches that season, a hat-trick away at Preston North End in the FA Cup sticking out.

His first goal in that Cup clash was eerily similar to his first-ever Premier League goal, two years separating either strike. Managing to create space for himself, a ball through was inch-perfect for the Irishman to slot past Connor Ripley.

Operating in the gap between the two central defenders, he evades their attempts to close him down before bursting through to finish the move off perfectly.

His other two on the day showcased different sides to the Cork-born striker’s overall game, an audacious effort cannoning in for his second before another run through the centre won Idah a penalty.

Stepping up for the penalty kick, Idah coolly slotted away to get a hat-trick in just his third ever senior appearance for Norwich. This might be why Idah has disappointed some Norwich fans in the step-up from boy to man, this tendency to blow hot and cold. When he’s at his very best, he can score goals for fun.

The confidence booster of his first-ever Premier League goal might well see Idah become Norwich’s hero in their attempts to stave off relegation, a real ‘one of your own’ feel even with his humble origins in Cork.

As much as the scrambled-in effort against Everton stole the headlines, his ability to retrieve the ball deep and spray it out to the likes of Milot Rashica and Josh Sargent on each wing was crucial in continuing Norwich’s positive approach in that contest.

Pukki might still be Norwich’s main talisman up top, but with a new bit of youth exuberance up top to complement Pukki’s clinical nature, it works well.

The four-pronged attack of Pukki, Idah, Sargent and Rashica worked wonders against Everton – Sargent with a point to prove after a trying period acclimatising to life in Norfolk, Rashica unlucky not to score right at the death.

Idah is a likeable figure amongst Norwich supporters not just for his Academy roots, but for the promise of Norwich’s man up top.

In past seasons, The Canaries have purchased some strikers who have been outright failures – Ricky Van Wolfswinkel the most notable name, their record signing managing one goal in a disastrous spell after succeeding at Sporting Clube De Portugal.

In Idah, even if he doesn’t reach the heights his early promise suggested, no transfer fee was attached in getting his services. But, with his goal against Everton causing pandemonium in Carrow Road, Norwich fans will hope he’s a success more than the past high-profile signings they’ve made.

With Watford up next for Norwich, it’s a perfect opportunity for Idah to get another so quickly after his first – The Hornets failing to keep a clean sheet in any game so far this season.

The Everton win might be papering over the cracks somewhat – Norwich still in the drop-zone – but the performance of Adam Idah alone in that contest will be a source of optimism for supporters used to the doom and gloom of the Premier League.

Even if Norwich do drop down, the Irishman looks ready to be an effective Championship goal-scorer as a far more mature figure than the kid trying to perform in the 2019-20 season.