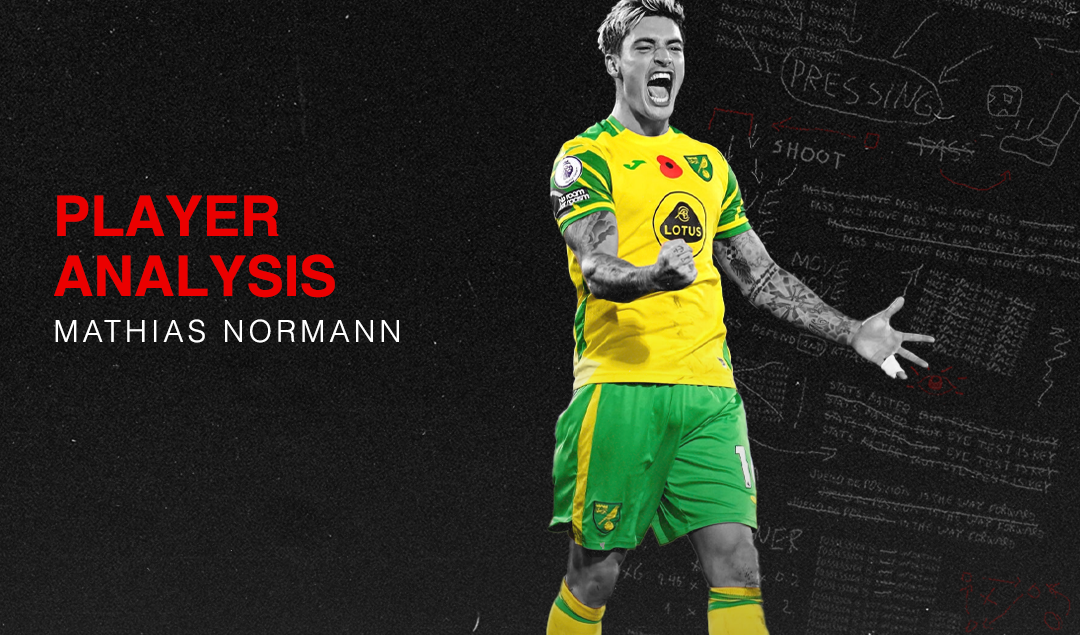 Mathias Normann had only played eight Premier League games for Norwich City before picking up a pelvic injury in his ninth game in the first half against Wolverhampton Wanderers.

In that short spell, he registered an assist on debut, scored one of the two goals in Norwich’s first victory of the season, whilst also being a part of their joint heaviest Premier League defeat and the sacking of the manager he came to play for, Daniel Farke.

It has been a hectic couple of months or so for the Norwegian star who is already making an impact in English football. His story so far is of a player with enormous potential but one who is restricted from getting the recognition he deserves by frequent injury disrupting his progress.

Viewed as one of the best players in the Russian Premier League and apparently the target of various English clubs previously, he has a relatively low profile for someone so able.

Normann was born in the very north of Norway and really emerged through Bodo/Glimt’s system where his midfield abilities caught the eye and enabled him to make a move to Brighton & Hove Albion, albeit as a future prospect.

He was immediately loaned back to Norway, to Molde FK, where he was managed by Ole Gunnar Solskjær and teammate of a very young and emerging Erling Haaland.

Performances at Molde allowed for him to have a run of games for the Brighton under 23 team, however, he wanted to find first-team opportunities and with the first team battling for survival under Chris Hughton – with his style of play being far more defensively minded and trusting in older players – he decided to do what he has said to be the best decision of his career, move to FC Rostov.

At Rostov, Normann developed his game into the one that it is today. His passing range improved and his defensive awareness to cut passing lanes and win possession back allowed for him to make his Norway debut in 2019.

He has become part of an improving Norway team, one of several players combining into the nation’s strongest line-up for some time. Alongside Haaland and Odegaard, he holds an influential place in a talented and promising team.

Despite making few youth team appearances for the national team, since being called up to the first team in 2019 he has made 11 appearances and looks to be a constant name in Ståle Solbakken’s side.

In this Norway team under Solbakken there have been numerous formations used, however, he does tend to play alongside another central midfielder – rather than on his own.

Solbakken is fond of Normann and has always praised the way he plays. It is just unfortunate that Normann has occasionally had to miss international fixtures, like the World Cup Qualifiers in October, due to minor injuries.

The evolution of his game in Russia led to transfer rumours with Manchester United (possibly with the Solskjær link) and then Southampton, Leicester, Sevilla and others.

It came as a surprise when it turned out that it was newly-promoted Norwich who signed him, although it reportedly took months before Rostov allowed for Normann to leave on loan. This also left Norwich without a traditional, proper defensive midfielder for the first three matches of the season and even the fourth as he did not come off the bench.

He was widely perceived to have been brought in to replace the departing loanee Oliver Skipp who had been immense in the 2020/21 Championship winning Norwich team, covering the back four superbly and proving that he was certainly ready for the Premier League. A quick comparison between Skipp and Normann highlights how the two players are definitely different.

Last season in the Championship, Skipp achieved a pass success rate of 88%. Contrasting to Normann’s 74.9% in the Russian Premier League. Furthermore, Skipp completed around 48 accurate short passes per game, whereas Normann completed 38.

A notable difference in the passing is how Normann attempted to play far more long ball passes per game than Skipp – who favoured the short passing to players around him. Although, last season, Skipp completed 58.4 passes per 90 minutes and Normann, out of his five 90 minute matches, completed 58.6 passes per 90.

A further clear dissimilarity is the defensive nature of the two. Skipp completed far more interceptions (1.1) and tackles (2.3) per game than Normann (0.6 and 1.4). Offensively last season, in 15 games, Normann successfully completed 1.2 dribbles per game compared to Skipp who completed 0.6.

The polarity in their respective games are clear and even though Normann is Skipp’s replacement for Norwich, he is certainly not a like-for-like change – a more offensive-minded player for the defensive position Norwich had to fill.

Additionally, Normann looks to intercept and pick the ball up higher in the field and to initiate attacks, compared to Skipp who will sit in front of the back four – breaking up the play.

A further difference is how Skipp completed 90 minutes in 44 of Norwich’s games last season, only being ruled out injured for the final game of the season. This season, Normann has already picked up that injury against Wolves which has required surgery and is likely to see him out until late January 2022.

This injury is of little surprise. When Norwich signed him on August 29th, he had just recovered from a muscle injury that had put him out of action for 7 of the final 8 games of the Russian Premier League season for FC Rostov – returning to the bench for the final game.

With these injuries, and other reasons, that persisted through the season, Normann only managed to play 15 league games out of a possible 30 – seeing Rostov sink to ninth after finishing 5th and achieving European football in the season prior.

Injuries have impacted Normann throughout his career – there can’t be any doubt about that. At 25 years old he has made 145 senior appearances.

Compare this to fellow Norwich teammate Max Aarons who, at just 21, has, as of the start of 2022, made 3 more appearances in his early career – 148. This is no slight against Normann, he’s just been hugely unlucky in that regard. And unlucky it is, because the technical ability he has is outstanding.

Being deployed in a defensive role in the midfield, Normann has acted as the man sitting in front of the defence, picking the ball up and then moving it on to regain control of possession and allow for attacks to begin.

He has great ability to progress forwards with the ball and push the ball into the opposition’s penalty area. When given time on the ball, his natural ability to pick out a long pass is remarkable.

By playing as a somewhat deep-lying playmaker he can offer support when his team are attacking down the wings by dropping off, receiving the ball and then looking to play it forwards.

Additionally, he provides support to the full backs by dropping off behind them and then playing an instinctive ball behind the defence or to switch the play and send through players with an attacking prowess. Therefore, pacey players would benefit from Normann’s style of play as they can get on to the end of his through balls.

For Norwich, this is what Teemu Pukki needs the most as he is at the top of his game when he has somebody feeding balls through to him – like a certain Emi Buendia. Simply, Normann’s natural positioning and awareness of the game is superb.

A constant theme tends to be the number of passes he attempts, but the low success rate of these passes, however this can be seen to be largely due to his progressive style of play.

Normann may benefit from playing alongside an out and out defensive midfielder who will provide constant cover for the back four – allowing for Normann to aid the full backs, begin the attack and play the ball out into space.

A double pivot would suit well for this. His high energy allows for him to cover a lot of ground which helps him and the team out defensively.

Perhaps surprisingly, as he stands at 5ft 10in, he has great aerial success. In last season’s Russian Premier League he won 60% of his aerial duels – as he has so far in this season’s English Premier League. A stat that ranks him highly amongst fellow Norwich players who have played a similar number of games, and even ones who have played more.

Whilst COVID-related absences and general injuries have hampered Norwich’s team – just like most teams now in the Premier League – they simply have not been up to the standard of the opposing teams, notably in physicality. A returning Normann to help anchor the midfield and show tenacity can add strength to their cause.

For what it’s worth, in this Norwich team, out of the 26 players so far used this season he has the 5th lowest pass success rate, yet the third most amount of dribbles made per game, the most shots per game and a healthy amount of interceptions and blocks for the position.

Despite not having the highest number of passes or key passes per game it is Normann who has the highest average rating for Norwich this season – all according to WhoScored.com.

On debut, he picked up an assist against Watford where the ball fell to him on the halfway line and he instinctively hooked it around a Watford defence, first time, for Teemu Pukki to run on to and place it past Ben Foster – a typical Pukki goal.

As such, this demonstrates that Normann is capable of adapting to different teams’ style of play and also capable of creating chances that allow for Pukki to play at the top of his game.

Following on from his debut, against Burnley he rouletted on the edge of the box to get past their defence and then nicked the top of the crossbar. Against Brighton he juggled the ball over to the corner flag before more than skilfully winning a free kick in a promising position.

Against Southampton the ball was knocked down to him on the halfway line and, first time, he struck the ball with the outside of his right boot over the defence for Milot Rashica to run on to and get in behind.

These various examples of him taking the game by the ‘scruff of the neck’ and providing excellence is just what is needed in a beleaguered Norwich team. His fine solo goal that prompted a victory at Brentford only emphasises his ability to change the course of games.

Ultimately, it is hard to completely judge him in the Premier League after just nine games so far, but obvious natural talent and awareness is there and he has proven already that he should be a regular starter in a top-flight team.

At the end of this season, Norwich have an option to buy for a figure that has been confirmed would be a club record but there are various reports as to what this number actually is.

Normann’s a terrific player. He has the passing ability, general awareness, high energy and physicality to compete in the top leagues. Hopefully it’s not a case of injuries ruining his career because he could positively impact many teams.

A personal belief is that he would suit a double pivot as, with another midfield player next to him, who’s more defensively minded, this would allow for Normann to push his game on more. This would allow for him to carry out his defensive duties and grant him more freedom in roaming across the midfield.

Mathias Normann is a top-flight footballer and as long as he can be free from injury he could be a key player in Europe’s major leagues.