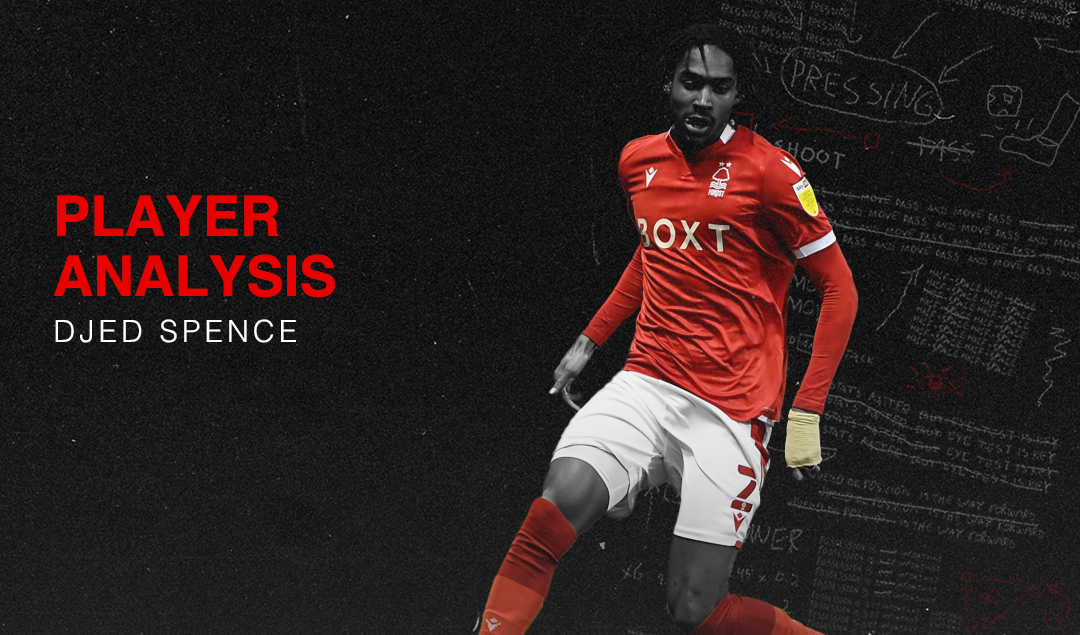 With Nottingham Forest’s resurgence under Steve Cooper bringing joy and optimism back to The City Ground – the potential of Premier League football enthralling the hardened Forest fans –  favourites amongst an excitable fanbase are beginning to emerge.

Brennan Johnson’s seven goals and six assists from the wing has made him a transfer target, but he remains committed to the Forest cause. Likewise, Lewis Grabban’s goals and hard work have made him a trustworthy captain. But, in Middlesbrough loanee Djed Spence, the Nottingham Forest fans have fallen in love.

With impressive display after impressive display, a notable shut-out of Gabriel Martinelli in their FA Cup clash against Arsenal standing out, everybody connected to the red part of Nottinghamshire will hope he makes the move permanent. Reading through social media reactions when Spence posts a picture after a win, his popularity is only rising.

Positivity around The City Ground hasn’t always been apparent, Forest suffering in the second tier of the English football pyramid since 1999. Many big characters have been and gone, many attempts to secure promotion back to the Premier League, but this sleeping giant has been marooned in mediocrity for well over two decades.

Chris Hughton’s disastrous spell as manager saw Nottingham Forest plummet to a new low, rooted at the foot of the Championship under the former Newcastle manager. Hughton’s tenure was rightfully cut short, managing a measly 26.4% win percentage at The City Ground.

Forest would opt for ex Swansea manager Steve Cooper to take the reins after Hughton’s exit, Cooper guiding Swansea to a playoff semi-final and final during his two years as Swans boss.

Victory in the playoff final has proved to be elusive for Cooper, but bringing in a manager who knows how to bring success to an unfancied group, was a wise decision by the Forest hierarchy who are prone to a scattergun approach when appointing new managers.

Under the former England youth coach, belief has returned to The City Ground with a number of players benefitting from the Welshman’s eagerness to restore pride to Forest.

The entertainment has returned, Chris Hughton’s Nottingham Forest boring supporters with far too much emphasis on defence over attack.

Forest’s first win under their new coach saw belief return, going a goal down at Oakwell versus Barnsley before a surge of second-half strikes won the contest for Cooper’s men.

Going over to the masses of away fans making the journey from Nottinghamshire to South Yorkshire, Steve Cooper was laying the foundations for what was to follow.

Pumping his fists and interacting with the crowd after his first victory as Forest boss, this passion and enthusiasm has only continued. In with a playoff shout yet again, the likes of Djed Spence have been instrumental in feeding off the renewed optimism at The City Ground.

Djed Spence is as direct as they come, an expansive wing-back always looking to attack and push his side further up the field.

Available as a right winger also if needs be, the three at back system under Steve Cooper allows Spence to patrol down the flanks with the likes of Scott McKenna standing firm at the back.

12 wins from 21 under Steve Cooper shows the consistency needed to make a playoff push, Djed Spence has been undroppable since Cooper’s arrival.

Watching Forest face off against Peterborough United in early December, Spence’s relentless energy stood out. Bombing up the pitch, he was also tireless in reverting back to a defensive position when Peterborough had a rare burst forward.

Even when the game was done and dusted – a comfortable 2-0 win for Forest – Spence continued to bomb forward to try and add more gloss to the score-line. Not one to rest on his laurels, he’ll run himself into the ground for a club that have taken to Spence with open arms.

Spence has starred for Middlesbrough, winning EFL Young Player of the Month back in January 2020, but he’s really come into his element by switching from The Riverside to The City Ground.

With Middlesbrough’s fortunes changing dramatically under Chris Wilder, Wilder has allowed for Spence to stick it out with Forest due to the harmony between club and player apparent in Nottingham.

If he continues at his current rate, Middlesbrough could well cash in on Spence or even revert him back into the line-up when the loan expires. Forest will be one of many suitors for his signature however, Southampton and Tottenham also sniffing around.

This new interest will have come about from Spence’s Man of the Match worthy performance against Mikel Arteta’s Gunners in the FA Cup, Nottingham Forest’s number 2 dealing with Martinelli more effectively than the likes of Joao Cancelo in Manchester City’s recent scare at The Emirates.

Cooper praised his side’s counter-attacking approach, Djed Spence crucial in allowing that quick forward play to work. It was far too much for Arsenal to handle, Spence and co garnering national appraisal.

These performances haven’t been in isolation, however, Cooper’s men climbing the table through consistent form.

A number of impressive away performances have catapulted Forest up the league standings, a 3-0 win at Birmingham near the start of Steve Cooper’s tenure saw Djed Spence score a rare goal.

Remove, Retain or Reform – Four Options with Their Pros and Cons for the EFL Cup

It was an excellent strike too, the goal coming from a typical Nottingham Forest counter-attack under their Welsh boss. Picking the ball up from deep, Lewis Grabban charges at a number of Birmingham shirts before feeding Watford loanee Philip Zinckernagel into space.

Bombing down the channel, Spence pointed for the Dane to play him in. Responding to his teammate’s orders, Zinckernagel found an on-running Spence with the defender hammering a shot past the Birmingham keeper at his near-post.

A team goal from early in his tenure, but still indicative as to how Forest pulled off a Cup upset at the expense of an Arsenal side fielding the likes of Martin Odegaard and Bernd Leno. Daring and bold, excitement is palpable at The City Ground at the moment.

If Nottingham Forest were to break their two-decade hoodoo by returning to the Premier League, Djed Spence would etch himself into Forest folklore as a crucial player in their promotion story.

Even if it all fizzles out and Cooper can’t pull off a promotion, there’s no doubt that The City Ground contingent will demand Djed Spence sticks around permanently.

Despite losing 2-1 to Cardiff City on Sunday, Forest are still only two points outside the playoff spots. With rumours circulating from Premier League suitors, it’ll be intriguing to see where Spence calls home next campaign.

For the time being, with Forest on the up, he’s adored by all with connections to the former two-time European Cup winners.