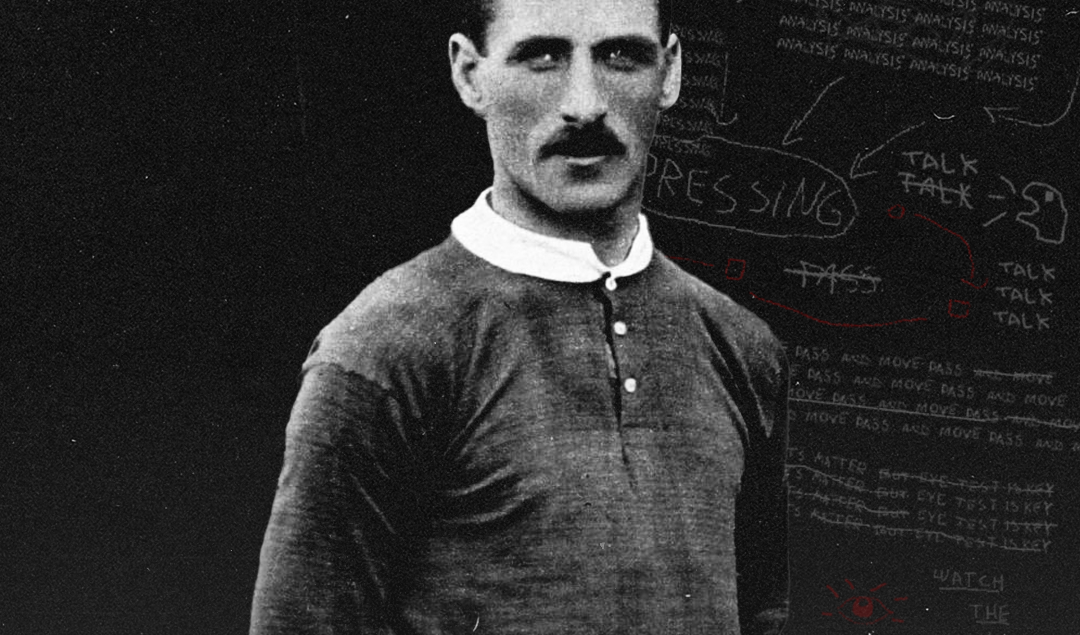 The arrival of spring 1915 heralded new levels of bloodshed in continental Europe as the Great War escalated among the belligerent nations. But amidst the suffering of men in the battlefields of continental Europe, the football season was still being played in England in the first year of the war.

Beginning in September 1914, it bucked the trend when compared to other sports, with England’s rugby and cricket leagues halted due to the war. But the 1914-15 season would be tarred by an event in April 1915 that would have far-reaching consequences in English football.

As the Easter fixtures approached, the 1914-15 domestic season was in its final stages with eight games to go. The pick of the Good Friday games in the First Division on April 2nd was Manchester United vs Liverpool at Old Trafford.

Both teams were on the wrong side of the table, with Liverpool languishing in mid-table, but Manchester United were struggling to avoid relegation. Their form under manager Jack Robson was sketchy, with just one win in their last five league games.

But as the day of the fixture neared, meetings began to occur between players of both sides at pubs in Manchester. Some were senior players, like Liverpool captain and former Manchester United player Jackie Sheldon.

The conspirators met to discuss fixing the game after being approached by a third party that is unknown to this day. The arranged result would be a 2-0 win for Manchester United primarily as odds of such a result were as high as 8/1. Fixing the result and betting money on it would allow the conspirators to earn a quick windfall.

These seven names would fall into infamy that would stain English football. Four of them were Liverpool players – Sheldon, Thomas Fairfoul, Bob Pursell and Tom Miller. Three were from Manchester United – Alexander “Sandy” Turnbull, Enoch West and Arthur Whalley. So why would so many players agree to fix a top-flight game? Three reasons.

Firstly, the war had a grave impact on football clubs financially just as COVID-19 has done to clubs today. Attendances during the 1914-15 season were decreasing, with many single men that would have attended those games now enlisting in huge numbers to replace the professional British Expeditionary Force that had been mauled to pieces in the opening months of the Great War.

A Footballers’ Battalion (17th Battalion of the Middlesex Regiment) had been created in December 1915 that had several professional footballers in its ranks. One notable volunteer was Walter Tull – he would become the first-ever British-born black army officer and the first black officer to lead white British troops into battle.

Declining attendances meant dwindling revenue for teams, with many clubs notably in the Second Division (nowadays known as the Championship) in danger of financial ruin.

Just like in the COVID-19 pandemic, the highest-paid footballers in the First Division took pay cuts. As the most a footballer back then could earn was £5 a week, it was agreed they would undergo a 15% pay cut. Others on lesser wages also took a pay cut and the money saved was used to help those clubs in financial trouble.

Secondly, there was a growing likelihood that the English Football League would halt all football in their respective divisions until the war was over. There were many in high society that sneered at football, seen as a sport for the working class, continuing their 1914/15 season even after Britain declared war on Germany on August 4th, 1914.

With footballers realising this would be the last season for a long while, many of the conspirators felt their careers would be over by the time the war ended. The prospect of making money by fixing a league game was too good to ignore.

Thirdly, with the focus in Britain squarely focused on winning the war, especially as the casualties began to mount, the conspirators probably felt they could get away with it. Yet there were players on both sides who refused to take part in match-fixing.

Liverpool’s Fred Pagnam and Manchester United’s George Anderson rejected their advances. 18,000 fans would flock to Old Trafford on Good Friday hoping to win in a game where Liverpool were favourites.

What transpired was anything but good.

Everything seemed normal when United took the lead through Anderson. But that is when things began to turn suspicious. Liverpool’s Pursell, one of the conspirators, purposely conceded a penalty. However, instead of normal penalty taker Anderson stepping up, it was their captain Patrick O’Connell.

However, his spot-kick went so far wide that it was closer to the corner flag. But his expression was not one of anger, shame or embarrassment – it was laughter.

Juventus 3-2 Fiorentina: A Star Is Born

As the game entered the second half, Anderson would double United’s lead. Pagnam then hit the woodwork for Liverpool, but instead of encouragement from his teammates, they gestured angrily at him.

None of the players attempted to change the score for the rest of the game, with United winning 2-0 and gaining two crucial points. It would prove vital, as they avoided relegation by a single point at the expense of Chelsea and Tottenham Hotspur.

In its match report, The Manchester Daily Dispatch wrote of the game at Old Trafford:

‘The second half was crammed with lifeless football. United were two up with 22 minutes to play and they seemed so content with their lead that they apparently never tried to increase it. Liverpool scarcely ever gave the impression that they would be likely to score.’

Almost immediately, there were those who cried foul. It was easy to see why – a large number of bets had been placed for United to win 2-0 and bookmakers refused to pay out. Media attention began to focus on the story, with the Sporting Chronicle reporting they had evidence players from both sides conspired to fix the result.

This prompted the Football Association (FA) to launch an investigation into the matter that lasted until the end of 1915. When the FA launched a hearing, the truth soon came out.

Pagnam and Anderson would testify against the conspirators. Pagnam revealed he had shared a taxi with Sheldon on the way to the game and had been offered £3 to be part of the plot.

Billy Meredith, one of United’s star players, denied being part of the fix yet stated he thought something was going on when his teammates didn’t pass the ball to him. It quickly became apparent that Sheldon was the ringleader of the conspirators.

The FA then concluded the players had conspired to engage in match-fixing, with no knowledge from the clubs itself, helped by the fact that Jack Robson was visibly disgusted at his side’s performance during the game.

The punishment to the disgraced footballers was announced on the 27th December 1915 and showed no mercy to them. All seven players were given lifetime bans while the clubs Manchester United and Liverpool were unpunished.

However, soon after the end of the 1914-15 season in April 1915, the Football League officially suspended games due to the war. Many of the banned footballers would join the war effort, spurred on by suggestions doing so would help overturn their bans.

They would serve their country with distinction, with Sheldon and Whalley wounded on the Western Front. However, one would never return, as Sandy Turnbull was killed on the 3rd May 1917 during the Battle Of Arras. His body was never found.

As a result of the players’ military service, when the Great War ended in November 1918, the FA decided to reward their sacrifice for their country by overturning their lifetime bans, with Turnbull posthumously reinstated. But one player was not reinstated – Enoch West.

The Manchester United centre forward hotly contested the ruling, claiming that he was innocent and unsuccessfully sued the FA for libel. West would have to wait until 1945 to have his ban overturned- at the age of 59.

George Anderson, the man who scored twice for United vs Liverpool on that fateful day, would also be ensnared by the stain of match fixing. During a game against Burnley in December 1917, Anderson was accused of match fixing.

Despite vehemently maintaining his innocence, he would be sentenced to eight months in jail. The 1915 match fixing scandal would also have a lingering impact after the Great War ended in November 1918.

When the Football League met in March 1919 to set out their desire on what post-war football would look like, they decided to increase the top two divisions from 20 each to 22. Derby County and Preston North End were already promoted after finishing in the Second Division’s top two spots in 1914-15.

The Agony of Doha: When Iraq Snatched Glory From Japan’s Palms

Many of the clubs felt it was only right that Chelsea, relegated to the Second Division in the 1914-15 campaign by finishing second from bottom, be automatically reinstated and take the 21st spot in the newly enlarged First Division.

However, the Football League decided the 22nd spot would go to a vote. Tottenham, who finished below Chelsea at the foot of the First Division, went against Second Division sides Arsenal, Barnsley, Birmingham City, Hull City, Nottingham Forest and Wolves.

Much to Spurs’ fury, it would be Arsenal that won the vote, despite having finished FIFTH in the 1914-15 season in the Second Division.

The Gunners had to thank the antics of chairman Lord Norris, which is for another article, but he used the Good Friday match fixing scandal and jailing of George Anderson to successfully set out his case (some say by bribery) for Arsenal to be voted into the First Division. The Gunners have never been relegated from the top flight since.

This would prove how one incident on an Easter day at Old Trafford had reverberating consequences in English football. As the Chicago White Sox found out in the 1919 World Series, match fixing ends badly.