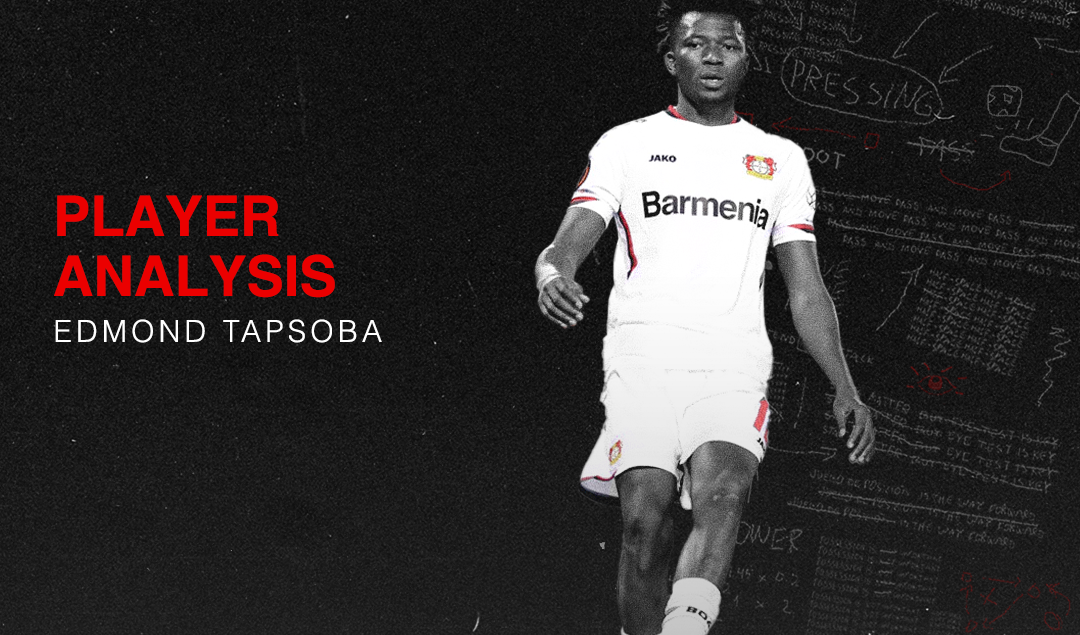 While the precocious attacking talent of players such as Florian Wirtz, Patrick Schick, and Moussa Diaby have drawn much of the attention for Bayer Leverkusen’s impressive showing in the Bundesliga, 23-year-old center-back Edmond Tapsoba has also been crucial to their success.

He dazzled for Burkina Faso as they narrowly missed out on a third-place showing in the African Cup of Nations, and has been a consistent performer for Gerardo Seoane’s side in Germany.

Tapsoba joined Leverkusen in the January transfer window of the 2019/20 season, and immediately improved the defensive security and ball-circulation of Peter Bosz’s team. Under Seoane, he has adapted to the Swiss’ differing tactical demands superbly.

While Leverkusen were a possession-oriented team under Bosz who attempted to lure the opposition forward with short build-up before moving the ball through the thirds, Seoane professed a more direct and transitional style of play.

Rather than being tasked with progressing the play from the back, Tapsoba is entrusted to recycle the ball from deep and retain possession while under pressure. He is composed on the ball and is often able to use his physical presence to resist opposition challenges.

While his lack of proactivity with the ball could be viewed as a weakness, he has other traits which bring value to Leverkusen’s possession. He attempts to play the ball along the ground as much as possible.

Even when attempting longer passes, Tapsoba’s instinct is to find his teammates at feet rather than punting the ball in the air, reducing the risk of Leverkusen turning over possession.

His 2.31 switch passes (passes that travel 40 yards the width of the pitch) per 90 is also impressive, allowing Leverkusen to switch their line of attack quickly and effectively.

Finally, his body position when receiving and carrying the ball brings noteworthy and somewhat unique facets to Leverkusen’s possession-play. Most players, especially defenders, tend to angle their body towards the side of their stronger foot.

One of the main reasons why several coaches prefer to have left-footed center-backs on the left is that they open their body towards the left flank, opening the passing options on that side in a way most right-footers cannot.

However, Tapsoba’s body is usually square to the ball when he receives possession. This means his body is more open and, consequently, he has a wider range of passing options available to him.

He carries the ball in the same manner, striding forwards with an open body that makes it hard to predict where he is going to direct his passes.

This is a seemingly minimal aspect of Tapsoba’s play, but as the safety-first option in Leverkusen’s build-up, his ability to have the widest range of passing angles is extremely useful.

It also can compensate for his lack of verticality in his passing and carrying by compelling opposition players to commit themselves too early, leaving space elsewhere which makes it easier for Tapsoba to push the play forwards.

Defensively, Tapsoba is an elegant and composed defender who excels in one-versus-one situations. His acceleration enables him to keep pace with speedy attackers, while he once again shows intelligence in his body positioning to show opponents onto their weaker foot and nullify their attacking threat.

Under Seoane, these defensive traits have been increasingly important as Leverkusen’s pressing has become less effective and aggressive than it was under Bosz.

With their PPDA (passes allowed per defensive actions) dropping from 8.49 over the 2019/20 and 2020/21 seasons with Bosz to 11.39 this year, Leverkusen need to trust their backline to control defensive situations in their own half slightly more. Tapsoba ensures this need is fulfilled.

Another impressive aspect of Tapsoba’s defensive play is his adaptability. Under Bosz, he excelled both in a back three and a back four, while under Seoane, he still excelled in the Swiss’ slightly more passive defensive approach.

For Burkina Faso, he once again had to adapt to a team that defended far deeper and was significantly less dominant than his Leverkusen team.

The range of settings in which Tapsoba has thrived as a defender speaks volumes about his acumen and intelligence as a center-back, qualities that are invaluable and rare in players so young.

While he is an imposing physical presence at 6’4”, he is surprisingly mediocre in the air, winning just under two-thirds of his aerial duels. He can also be rash and overly eager to engage in challenges, although he has noticeably improved in this aspect over his tenure in the Bundesliga.

Gerardo Seoane: The Revolutionary Swiss Manager Ready For the Bundesliga

It won’t be long until Tapsoba attracts interest from top European clubs. His rapid ascent from the Burkinabe first tier to the Primera Division to the Bundesliga in the span of just four years illustrates his capacity and desire to improve.

His athleticism, composure, and comfort in proactive, high-pressing defensive setups makes him a suitable fit for various elite teams.

He’ll need to be paired with a central defender who is more aggressive in possession and better in the air to cover those gaps in his game, but Edmond Tapsoba is unquestionably an impressive and exciting defender who has the potential to rise to the highest echelons of the game.