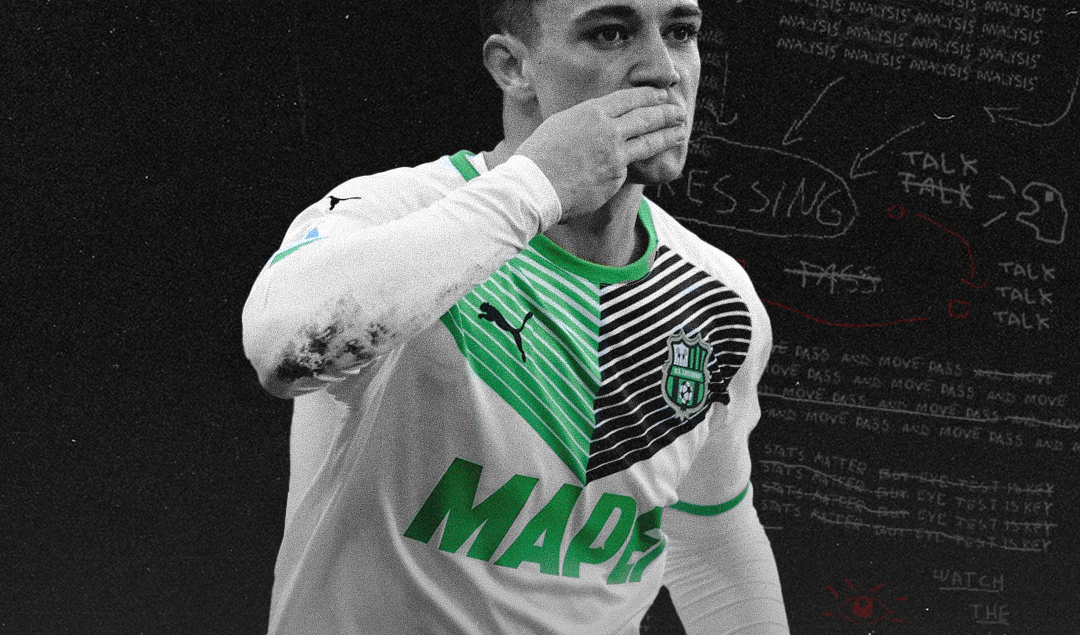 Giacomo Raspadori, perhaps the definition of a Sassuolo-made talent, and subsequently one of the best players that former Sassuolo youth coach, and current Fiorentina youth coach, Christian Papalato has ever seen. That’s not a statement filled with hyperbole, either.

There’s several reasons why Papalato, and many others, see 21-year-old Raspadori going straight to the very top. His performance against Empoli as his side ran out 5-1 winners encapsulates his brilliance better than most games.

It wasn’t just the two goals that saw many begin to turn their heads, click on YouTube compilations, and realise just how big of a gem sits on the hand of Sassuolo, either. It was the Philippe Coutinho-like low centre of gravity and awareness only those with the highest of potentials possess.

This is a player that will only get better, too, at least in the opinion of a man that spent more time than most watching him become Sassuolo and Italy’s newest star.

Papalato knew from the start just how talented Raspadori was, saying: “Since he was a child, helped by a great family, he has taken care of all of the details useful to his growth, then the talent has done everything by itself. Giacomo, as well as being one of the best talents I have ever seen and coached, is certainly one of the best players on a mental and cognitive level who has developed all of his high-technical skills through hard work.”

Papalato, himself, credited a position-change for Raspadori’s rise into the player we see today, saying: “Even at the beginning, it was possible to imagine a glorious path of this kind, certainly having moved him to to the role of striker has helped him speed up his path and in the coming years he will be a player of absolute international prestige.”

Raspadori is a fine example of the modern-day forward that we are continuing to see. Not necessarily more of a goalscorer than a creator, when looking at the numbers, it is hard to see anything less than the top of football’s food chain for the Sassuolo forward.

Compared to Sadio Mane, for example – a player Liverpool will need to at least think about replacing soon enough – Raspadori stands out as a man on the cusp of the next level.

Mane, meanwhile, makes 3.3 ball recoveries, and loses possession 16.2 times per 90. Better yet, Raspadori’s take-on success of 67.5% also betters Mane’s 58.2%. Now, whilst the Liverpool winger is no longer considered the best in his position, he is still a player with outstanding quality.

The fact that Raspadori has outperformed him so far his season in several key areas just hints at the talent the forward has at his disposal.

Papalato has even tipped the 21-year-old to one day make his mark in the Premier League, saying: “He (Raspadori) is absolutely in line with his growth path, he is preparing with the right timing for his further explosion. I could see him in in English football in a couple years.”

It is not a bold claim by the Fiorentina coach. In modern-football, a move to the Premier League is only comparable to that of a move to Hollywood in the acting world.

It has become the holy grail; a place filled to the brim with stars, so much so that even Aston Villa – a side languishing in mid-table –  are able to attract a player of Philippe Coutinho’s calibre.

A move to England, or, at the very least, a side competing for Europe’s top honours, feels like the natural progression point in a couple of years for a player of Raspadori’s ever-increasing potential. And that’s not to disrespect Sassuolo, either. It was their academy and coaches like Papalato that helped to form the player we see today.

Of course, anything could happen in the future, but comparing Raspadori to Liverpool’s Sadio Mane was no coincidence.

The Senegal international has just over a year left on his current deal at Anfield, and rumours aren’t exactly rife regarding an extension, which is no surprise considering his fall off in form over the last two seasons to coincide with what will soon be the beginning of his thirties. The Reds will need a solution. Enter Raspadori.

The Italian would – by all meanings of the definition – be a perfect fit for Jurgen Klopp’s system. Going back to the numbers earlier, there’s nothing that will impress Liverpool coaches more than the amount of ball recoveries that Raspadori records per 90.

Mane has arguably been the best at anticipating passes and winning the ball back in the final third since arriving at Anfield. Yet, here Raspadori is, doing the very thing Mane is supposedly best at, but more often.

As reiterated by Papalato, Raspadori is ‘preparing with the right timing for further explosion’. The numbers will only get better as he continues to develop. At 21, he is more than impressing, and, with seven goals and four assists to his name so far this season, Sassuolo have got themselves a player ready to take the club to the next level.

His rise comes at an ideal time for the Italian National team, too. Roberto Mancini has just been the dealt the biggest blow possible, with the news that Federico Chiesa will be out for an extended period with an ACL injury.

Chiesa is very much considered the main man for the European champions these days; he helped spearhead their rise to re-taking the crown they spent far too long without.

Without him in what is a crucial World Cup Qualifying play-off against North Macedonia, and, if they progress to the final, potentially Portugal, it wouldn’t surprise many if Italy struggled. Raspadori could solve that Chiesa problem, however.

The Sassuolo man has featured seven times for his national team, scoring just the one goal. But, his profile as a quick, pressing, silky forward that can create and find the back of the net, matches that of Chiesa.

Mancini could stick with the old guard in the frontline – although some may only be able to match the performance of cannon fodder – but, now, more than ever, could be Raspadori’s time to shine. Or, as Christian Papalato put it, time for ‘further explosion’.