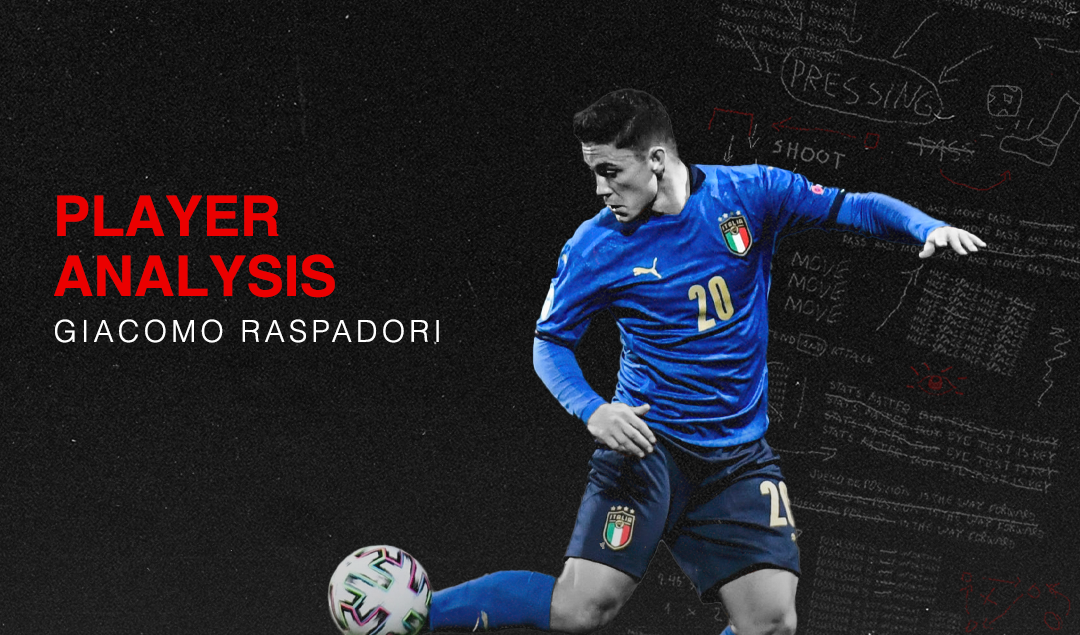 Over the 20/21 Serie A season, Sassuolo established themselves as the “best of the rest” aside from the famous “7 Sisters” of Italian football, having finished 8th for the second consecutive season and missing out on playing European football for only the second time in their history due to goal difference.

There are many things to like about Roberto de Zerbi’s team, from the style of football he had them playing, team MVP Manuel Locatelli and the electric Domenico Berardi. Another thing that many frequent Sassuolo watchers will like is academy product, Giacomo Raspadori.

Unlike many young players who often get their chance out on loan, Raspadori has remained with the Neroverdi and enjoyed a breakout year, putting in some exciting performances and scoring 6 goals in 13.7 90s, including 5 in 10 games in the final stretch.

His performance levels have been so good that despite being knocked out of the U-21 European Championship with Italy this week, he has been called up to the men’s squad for the Euros by Roberto Mancini and was given his debut against the Czech Republic. In preparation for this, it seems like the perfect time to profile the 21-year-old dubbed by some as the next Antonio Di Natale.

Despite his inexperience, Raspadori does so many things right and does them so well you could be forgiven for thinking he’s a few years older than he is. He is always on the move, rarely standing still. His starting position is typically quite high in order to pin the defensive line back and reduce the compactness of the defending team. This creates space for a Sassuolo player to drop into and receive behind the midfield line and often Raspadori is happy to do this job.

A common sight to see, especially with the ball high in the left back area, is Raspadori dropping into space and using his excellent touch to either quickly lay off the ball and spin in behind the onrushing defender or spread the play. Despite his small stature, he is only 5’7, he is able to retain the ball very well under pressure thanks to a combination of an assured first touch and excellent ball control.

This also helps him further up the pitch where his link play is effective and frequently results in dangerous attacks. He can trap difficult balls, use his awareness which comes from regular scanning, execute difficult passes, or use his agility and dribbling ability to get past opposition defenders. All of these skills help him be a multifaceted threat in the final third and one who the opposition cannot give time to. It’s no surprise he is in the top 5% for both key passes and shot-creating actions with 1.97 and 4.32 respectively.

In and around the penalty area, he shows composure and quickness of thought to create for himself and others. He is unflappable in the face of pressure and gives off the impression that he has more time than he actually does. He doesn’t rush his shots, sorting his feet out quickly first and steadying himself before picking the right option. It helps him be instinctive in the area, and he does well with balls and crosses close to his body.

Possibly his best trait is his movement. As mentioned above he’s always moving, looking for space he can exploit by running in behind. He’s quite fast and in Locatelli, Berardi, and Maxime Lopez, Sassuolo have players that can exploit small gaps in the defensive line.

He positions himself well in between defenders, identifies space quickly, and attacks the blindside with perfectly timed runs on a regular basis. The story is the same when the ball goes out wide and he is still able to make himself a threat despite his lack of aerial presence finding space just in front of the backline or creating it through dismarking.

Other strengths to mention are his defensive work rate, he both presses well and cuts off passing lanes intelligently through curved runs; his technique, he’s comfortable shooting off both feet and takes set pieces for Sassuolo; and finally, his leadership, which has seen him captain his side several times already in his breakout season.

At 5’7, his lack of aerial ability is not surprising. He does have a decent leap on him, but it doesn’t help much and consequently, he only wins 5% of his aerial duels. However, this is no barrier to becoming a top centre forward, with many centre forwards needing improvement in this area, especially among the new generation of strikers.

His small stature also makes it increasingly difficult when running at mobile centre backs. While he is a good and agile dribbler, he can be matched for speed and manoeuvred off the ball by quick centre backs. As an example against Napoli, he got more joy against Kostas Manolas than Kalidou Koulibaly.

For a striker, Raspadori doesn’t take a lot of shots, shooting less than Berardi, and assists the same number of shots per 90 as he takes on for himself, 1.97. On a wider level, he doesn’t actually provide much of a focal point, taking only 5.18 touches in the box. This can be a hindrance to a team and removes the option of direct move sequencing when the situation requires it.

Although he is a quick player, he has quite poor explosiveness, so he doesn’t really cover the first few yards quickly. Where this is noticeable is when he’s attempting to separate himself from a defender in the box while waiting for a cross.

He will try to fake to go one way before cutting the other but either due to lack of conviction in the original run or the slow acceleration, the defender is able to keep pace with him. Again, this is more of a problem against mobile defenders who can change direction well. Finally, despite having great ball control, improvements to his half-turn reception could be made to help him exploit spaces quicker and smoother.

Giacomo Raspadori’s style could be described as a Playmaking striker, one who looks to feed others as well as himself. Fbref player comparisons list includes many names we associate with such a style of play including Antoine Griezmann, Kelechi Iheanacho, and Joaquín Correa.

For a striker, he gets involved in play a lot, completing an above average number of touches and passes, showcasing his creative side. As mentioned above, he frequently comes short to link the play and help with progression by either laying it off to a nearby player or spreading it out to the winger.

Take a look at his passing stats and he is in the upper quartile in practically everything from passing across all ranges, key passes, through balls, and passes into the penalty area. He has a very good eye for a pass, coming from both impressive awareness of what’s around him, and an ability to process changes quickly and find a new solution.

Arguably, this comes at the cost of his activity in the box but being unselfish or a creative #9 doesn’t limit potential. He’s not the most powerful ball striker, preferring side-footed finishes. He likes to get close to the goal and shoot from within the width of the of the 6-yard box, in the area called the “second 6-yard box” by Alan Shearer. Shots here have the highest chance of going in and this intelligent shot selection, is a primary factor for Raspadori’s high Goals/Shot value of 0.25.

Raspadori can also cause damage to an opponent by running at them, using his close control, speed and agility. He uses his body well to shield the ball and in doing so, wins his side a lot of free kicks in dangerous areas and also penalties.

He’s fouled almost twice a game, is in the top 2% for both shots and goals created from fouls drawn and has won the most penalties in Serie A this season despite his relatively little game time. This gives his team a huge advantage and considering the rise of set-piece coaches, is an aspect of his game Sassuolo could really maximise.

He shows a high-level understanding of space and how to use it for both himself and others. This probably stems from the fact he knows his size won’t allow him to brute-force his way past defenders or beat them physically so the best thing for him is to be one step ahead of them. Whether it’s creating the space for a through ball as he did for Filip Djuričić against Roma, his poacher-like equaliser against AC Milan or the excellent touch into space for his winner against the same club, Raspadori will score many goals thanks to this.

As is so often required in the modern game, Raspadori understands the importance of defending from the front and can set the tone in leading the press. For someone in their rookie season, he could be forgiven for a Duracell bunny-like approach to pressing, just chasing down the ball with no regard to structure and compactness. But he shows a lot of maturity in waiting for the supporting members and pressing correctly to give his team the best chance of winning the ball high up the pitch.

The rise of Giacomo Raspadori has been meteoric this season and there’s no reason why it is going to slow down soon. The first step is obviously the Euros although with Ciro Immobile and Andrea Belotti it wouldn’t be a surprise if he didn’t get on. Nevertheless, it will be a good experience for him and a chance to learn of two of the best penalty area threats in the league.

Learning to improve this aspect of his game will be important if he is to take his game to the next level. Applying this at the Mapei next season and fully taking over from veteran Francesco Caputo is the best step for his development rather than taking the step up to a bigger club such as Inter Milan, who are rumoured to be interested. Raspadori has a bright future ahead of him and is one football fans may want to look out for in the coming years.