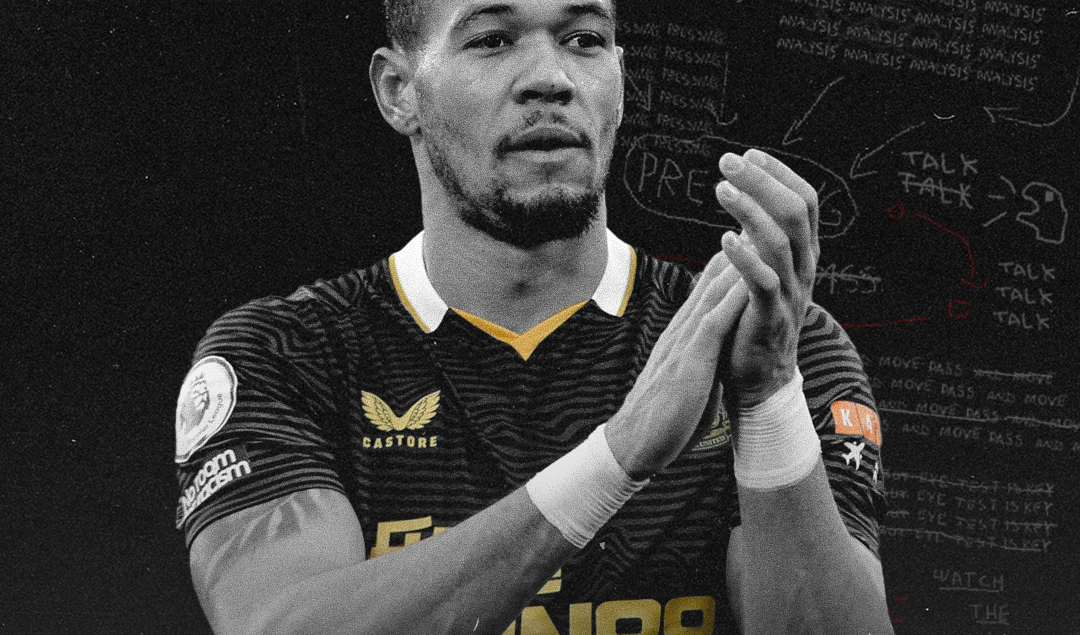 One of the first things to do when a relatively obscure striker is reported to be {signing for your club} is head to a reliable stats page. A simple one highlighting goals and assist will do. And that’s just what Newcastle fans did.

There, they would have seen that Joelinton scored seven times the season prior in the Bundesliga, and the same amount but with a game less while on loan to Rapid Wien the campaign before that. A six-year deal for a reported club-record fee of £40 million.

It was an unprecedented amount by the club who had traditionally utilised the loan market. So maybe there was some hidden element to Joelinton, the fans thought; something that would be unlocked in the high-intensity Premier League that only the club knew of.

Joelinton scored on ten occasions across 80 games in his first two campaigns at Newcastle. Typically playing alongside an additional attacker, Joelinton was still a huge disappointment, the biggest flop of the last years in the Premier League, some said.

In November 2021, following the takeover by a consortium consisting of majority shareholder PIF, Newcastle were carrying out their much-publicised interview process.

Given the club’s perilous position in the table, still without a win in the league, it made sense to go for the biggest name on the list. But Unai Emery eventually turned down the proposal, deciding to stick with Villareal.

So the club opted for Eddie Howe, chairman Yasir Al-Rumayyan’s preferred choice according to the latest reports. It was quite polarising at the time.

Naysayers pointed to the relegation of Bournemouth, his last job, and the frailties his side traditionally have at the back.

However, a report in The Telegraph said he swung his job with an incredible interview:

“Howe had prepared a detailed plan of what he would do if he became Newcastle’s manager, which included the areas of recruitment, tactics and coaching methods,” the report read. “It was said to be incredibly detailed and encouraging as it fitted in with the ideas the owners have for the first-team squad.”

Fast forward several weeks and Joelinton played right of a 343 formation for Howe’s first Newcastle game, a 3-3 draw with Brentford.

In his next game, he played Joelinton opposite Wilson in a 442 in the 2-0 loss to Arsenal. It was the same again in the 1-1 draw with Norwich, and the win over Burnley, Newcastle’s first of the season, and then the 4-0 drumming to Leicester.

Against Liverpool, a 3-1 loss, Joelinton featured in the centre of midfield as part of a five, and ditto against Manchester City, a 4-0 loss. Some might be called crazy but despite the results, Joelinton had started to vastly improve.

Would it be fair to assume that Howe, in the interview where he reportedly supplied a rigorous blueprint going forward, laid out a pristine tactical plan of how their £40million player could be truly unlocked? “Put him in midfield,” Howe might’ve said to raised eyebrows. “And here’s why”.

Joelinto’s psychical presence was never an issue, but now confidence had started to show, as well as his technical ability. And then confidence soon turned into something more visceral, a lumbering but somehow competent collection of Brazilian chaos who the opposition can not just get a grip on.

He wins most 50-50s, he beats most to a header (more than that later), and though he moves like a tranquilised deer on rollerblades, Joelinton always seems to end up on top.

While performances have grown, something else has grown as well: Joelinton’s temper. He rages. He rages at the referee, he rages at a Dele Alli yielding a wry smile, he even rages at his teammates.

He rages when he scores, galloping 90-yards across to the Brentford Community Stadium to pump fists and roar with the away support. For a man heavily weighed down by his price-tag, Joelinton has become the freest man on the pitch.

Though in part Howe’s tinkering has allowed this, Joelinton has grown more steadfast and bullish mentality. Both together make for an astounding reform of a player.

Though there has been admiration for Joelinton’s transformation, some have wished he would contribute more goals, a topic picked up on by the True Faith Podcast, a Newcastle fanzine, last week.

As if he had been listening, Joelinton duly delivered against Brentford, scoring the opening goal for Newcastle. The goal, a fine header from inside the box, registered an xG of just 0.10.

So this guy who has shown that he can be clinical in the right opportunities where has he been going wrong before? Despite playing a majority of this season in the forward line, Joelinton has only registered seven shots on target, two of which are goals.

Including missed shots, he’s made 16 strikes in total- and some 38% of those shots came from wild positions outside the area.

Even more interesting though, Joelinton has failed to make a shot (withstanding ones that were blocked and a single 30-yard missed strike) coming from the right-hand side of the post, as would be typical of a right-footer.

All his shots come from at least inside the right post, but mostly to the left of the six-yard box. In essence, Joelinton lacks a huge lack of positional intelligence when getting shots off in high xG positions.

But even by recognising this and bringing him back to midfield, Howe has allowed for players such as Joe Willock forward into those areas while being supported by a defensive cover in Joelinton, who can win aerial duels (some 3.79 per 90 min) and second balls in matches, while also feeding in the attackers with progressive passes ( 4.42 per 90 min).

In that sense, Joelinton has, ironically, become one of Newcastle’s best suppliers of goals this season, even if he has not been the one to find the net himself. So what does the future bode for Joelinton?

Form is temporary, class is permanent: is Joelinton enduring a Mo Diame sort of campaign, a run of 10-15 matches in which he’s found form, or is Newcastle now seeing him as a key asset in going forward, a solid, Premier League-quality player to base their midfield around?

I would argue the latter, Joelinton thrives of determination, a sort of unrelenting spirit that was vacant with Steve Bruce but charged up to the point of mania by Howe.

It reminds you of what then-manager of RB Leipzig, Julian Nagelsmann, had said of Joelinton: “The bloke is an animal. He’s a machine. It’s hard to stop him.”

Those words that seemed so obscene last year and yet now provide insight into how far that Newcastle’s embodiment of Howeism can really go.