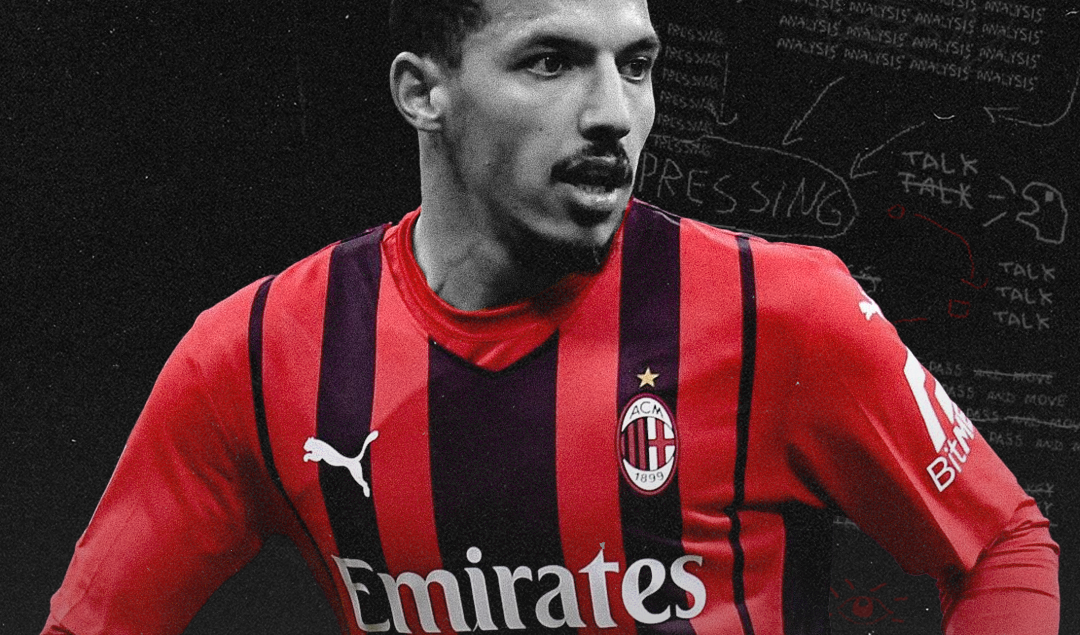 Ismaël Bennacer has become one of AC Milan’s most important players since he arrived from Empoli in 2019. The 24-year-old is best known for operating as a regista or deep-lying playmaker and he has been integral in the Rossoneri’s return to prominence in Italian football under Coach Stefano Pioli.

Prior to joining the Italian giants, the French-born Algerian international came through the youth system of Arles in southern France and then spent two years on the books of English club Arsenal. After a loan spell at French Ligue 2 side Tours, he played for two seasons at Empoli where he helped earn Serie A promotion.

Despite the Tuscan side dropping back down to Serie B, AC Milan was still impressed with the playmaking abilities of the Algerian international and decided to acquire him for a reported fee of €16 million plus €1 million in bonuses.

For AC Milan, the 2019/20 campaign was one of transition. The Rossoneri hired former Sampdoria tactician Marco Giampaolo as coach and Bennacer played in the middle of the central midfield trio in Giampaolo’s 4-3-1-2 formation.

The Algerian international featured in four out of seven matches under Giampaolo before he was sacked and replaced by Stefano Pioli. The former Lazio and Fiorentina coach switched to the 4-3-3 formation before changing to the 4-4-2 and finally settling on the 4-2-3-1.

AC Milan finished sixth in the Serie A table with 66 points, but it was its unbeaten run in the last 12 rounds of the season that was most impressive. Pioli found stability within the team and the signing of Zlatan Ibrahimović in January 2020 gave the Rossoneri extra star appeal, confidence, and experience.

After a slow start, Bennacer had a respectable first season with the Italian giants, starting 28 out of 31 Serie A games and finding the back of the net once. He also developed an impressive midfield pairing with Ivorian box-to-box midfielder Franck Kessié.

AC Milan challenged for the Serie A title in 2020/21 and lead the title chase early in the campaign before city rival Inter swung the momentum in its favor and secured the Scudetto.

Unfortunately, Bennacer battled with muscular injuries throughout the campaign and he only made 21 appearances in the Italian league, starting 17 times. He failed to score a goal but he still managed to supply two assists.

Bennacer remained an important part of the AC Milan midfield throughout the 2021/22 campaign as the Rossoneri went on to win their first Serie A title in 11 years. Although he only started 15 out of the 31 league matches last season, his contribution was still significant.

Arguably the main reason that Bennacer did not start as much as he did in the previous two seasons was the emergence of Sandro Tonali. The Italian starlet had difficulty fitting into the Diavolo squad in his first season after arriving from Brescia but he blossomed in his second one.

Tonali displayed his ability to perform two roles in the one position. The Italy international was able to cover ground, win the ball back for his team, and make late runs into the box like a box-to-box midfielder while also controlling the play like a deep-lying playmaker.

Meanwhile, Kessié had a stellar 2020/21 season and was expected to continue in the same vein in 2021/22. However, the Ivorian midfielder did not replicate that form in the early stages of the campaign and played like a man prepared to leave after his contract expired.

He was not performing well in the midfield pivot, and due to Brahim Díaz not being able to sustain his form early in the season, Kessié was moved into the trequartista or attacking midfielder position by Pioli.

This allowed Bennacer to regain his spot and co-exist with Tonali in the double pivot. Having this duo in midfield, the Algerian international was able to dictate the play while the Italian had more freedom to roam around the ground and utilize his energetic running. 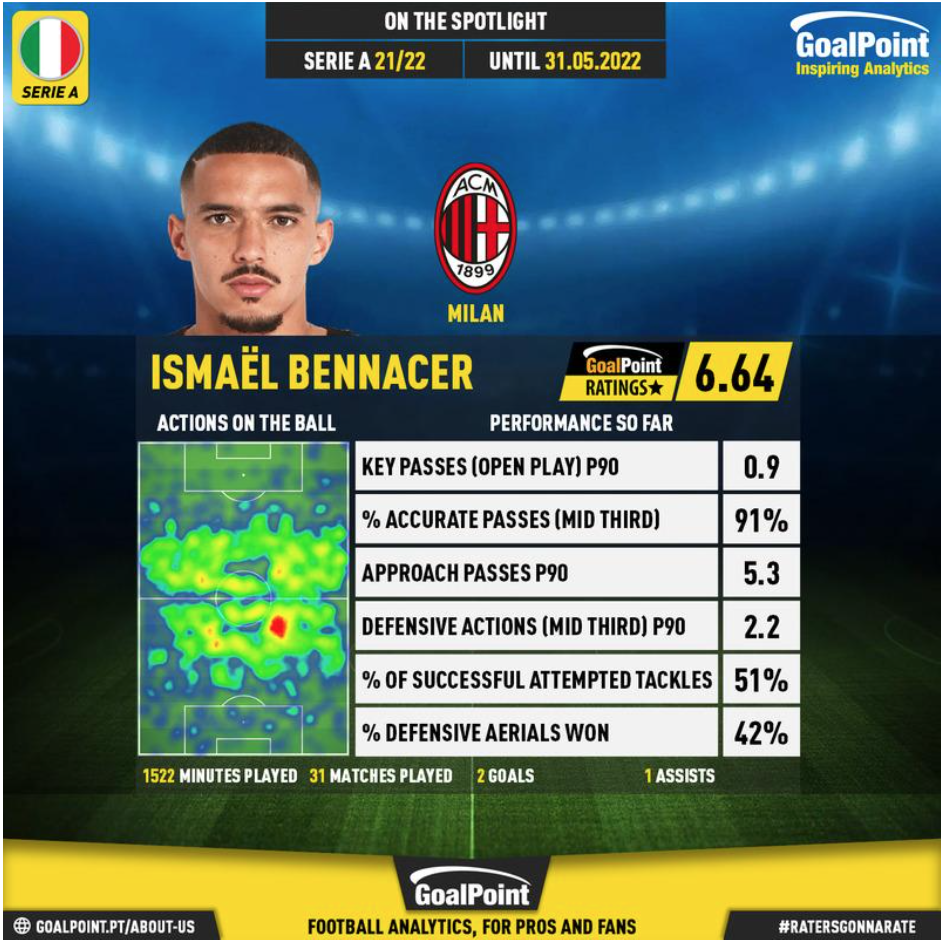 According to GoalPoint, Bennacer played 31 matches throughout the 2021/22 Serie A season and featured for 1,522 minutes. He also managed a goal and an assist in AC Milan’s 4-2 victory away to Bologna in Week 9 as well as finding the back of the net again in the 1-0 win against Cagliari in Week 30.

Despite his limited minutes, he was still able to make an impact in midfield. As the heat map indicates, his presence was predominantly in the middle third of the pitch and he was rarely in the opposition’s penalty area as well as his own. The 24-year-old was the most present in the right central midfield position, perhaps a reflection of him operating as a deep-lying playmaker.

Bennacer’s strength is evidently his ability to pass the ball around. He averaged 0.9 key passes in open play as well as 5.3 approach passes per 90, and he had a passing accuracy of 91 percent in the middle third.

He is still able to make decisive passes for his team despite his deep position. However, his average approach passes highlights his ability to bring the ball forward from midfield to allow his teammates further up the pitch to generate scoring opportunities.

It is not surprising to see the Algerian with a high passing percentage in the middle third either. With his crisp technique on the ball and his composure, the central midfielder is a player who ensures that AC Milan can maintain possession whenever possible.

Defensively, Bennacer is not a poor performer either. Throughout the 2021/22 season, he had a successful tackling rate of 51 percent as well as winning 42 percent of aerial duels despite standing at 175 cm tall, and he averaged 2.2 defensive actions in the middle third per 90.

His ability to perform his defensive tasks demonstrates that he is capable performer in both phases of the game. Although his playmaking talents are what he is known for, he can still assist his team out of possession and when it needs to win the ball back.

Ismäel Bennacer is a midfielder with fine skills on the ball and he experienced that winning feeling when he starred for Algeria at the 2019 African Cup of Nations. At the club level, he has also made his contribution, helping AC Milan win its first Serie A title in 11 years.

At 24 years of age, he should be nearing the peak of his career. His performances have been admirable so far and with the Rossoneri expecting to make further progress under Stefano Pioli, Bennacer might have a chance to earn great recognition for his skills outside of his club fanbase.