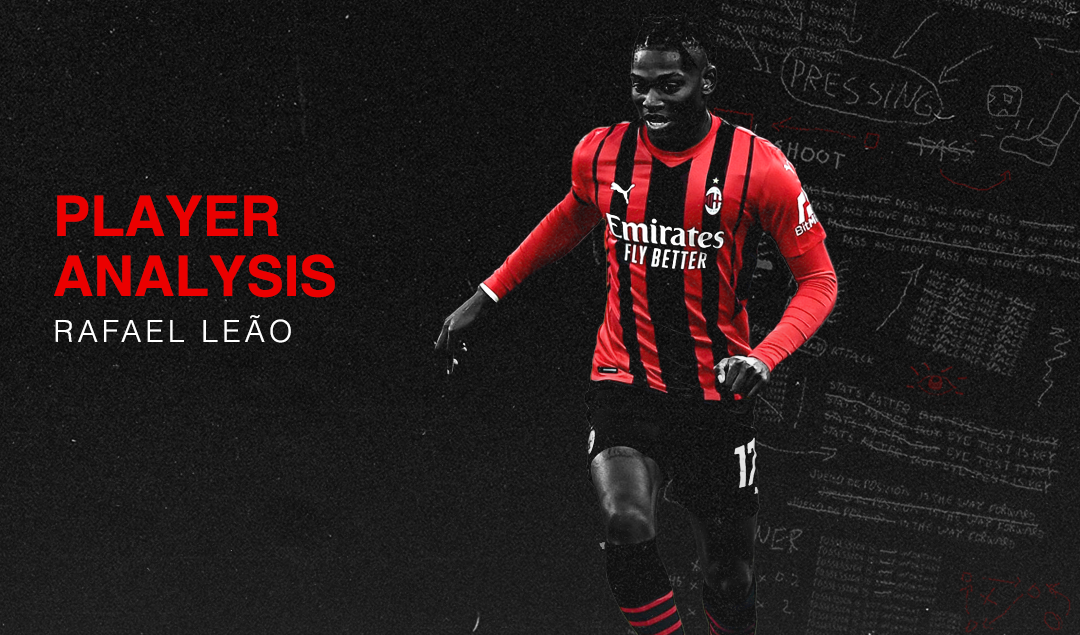 While being interviewed on Belgian television in August, AC Milan winger Alexis Saelemaekers had a rather surprising response when he was asked who was the most talented player the Italian giant has.

“Rafael Leão,” Saelemaekers replied on Eleven Sports Belgium.  “I have said this to him many times that, if he wants, he can win the Ballon d’Or.”

The Belgium international certainly showed a great leap of faith in his AC Milan teammate, and Leão has not produced the type of form for a season that would merit such an award, but the Portuguese winger has nonetheless made an impressive start to the 2021/22 campaign.

Leão has scored five goals in 16 competitive matches so far this season and he is developing into a lethal left-winger under Rossoneri coach Stefano Pioli. The 22-year-old has been with AC Milan since August 2019 but he has taken some time to fit at the Milanese club.

Before making the move to Italy, Leão came through the youth ranks of Sporting CP in his native Portugal. He had scored once in three Portuguese Primeira Liga appearances in 2017/18, and for the youth team, he scored five goals and provided three assists in six UEFA Youth League matches before moving to French club Lille.

The young Portuguese forward had initially signed for Lille in August 2018, but the Ligue de Football Professionnel (LFP) did not approve of his contract after Sporting had filed a complaint with FIFA regarding the transfer, and it demanded that his €45 million release clause should be paid, despite the fact that Leão had terminated his contract with the club in June of that year.

He had contemplated terminating his contract with the French club in September but his agent convinced him to stay and the LFP eventually validated the contract on September 4.

His stay with Lille would not be a long one but he certainly an impression. He started 16 out of 24 Ligue 1 matches throughout the 2018/19 season, and he went on to score eight goals, with six of them coming in a seven-match spell. This form drew the attention of AC Milan, who signed him for a reported fee of €29.5 million.

The Rossoneri had hired Marco Giampaolo as their new coach for the 2019/20 season and Leão would be paired in attack with Polish striker Krzysztof Piątek. The Portuguese starlet struggled for form like the rest of the team and Giampaolo was sacked after just seven rounds.

Stefano Pioli was brought in to replace the former Empoli and Sampdoria tactician, but he also had some struggles early in his coaching career at Milan. The Rossoneri ended the calendar year of 2019 with a 5-0 defeat away to Atalanta, leaving them 11th on the Serie A table and it was clear more work had to be done to improve the team.

Leão was also in and out of the startling line-up. Piątek was struggling to score goals so the Portuguese forward would play some games as a center-forward, but Hakan Çalhanoğlu was faring no better on the left-wing, so Leão also got some playing time as a winger.

Pioli had ditched Giampaolo’s 4-3-1-2 formation and implemented a standard 4-3-3 when he arrived at AC Milan but it was not getting the best out of the players at his disposal. Swedish great Zlatan Ibrahimović joined the club in January 2020 and he was quickly brought into the starting line-up.

Pioli tried the 4-4-2 formation in a few matches and paired Leão with Ibrahimović. Although the Rossoneri got three wins with that formation, Pioli scrapped it after a 1-1 draw at home to Hellas Verona. The coach then changed the formation to a 4-2-3-1, which was used in the 4-2 defeat to city rivals Inter in February that year. AC Milan had squandered a 2-0 lead in that match but Pioli has not changed his formation since then.

Leão would alternate between the left-wing and center-forward roles, depending on the availability or form of Ante Rebić and Ibrahimović in their respective positions, while Çalhanoğlu was moved into the attacking midfielder or #10 role.

The COVID-19 outbreak impacted on Italy in March 2020, causing a three-month hiatus for Serie A, but once the Italian league restarted in June, AC Milan was the team to watch pout for. It won nine out of the last 12 games and went undefeated, finishing the season in sixth place and qualifying for the Europa League.

Leão ended his first season in Italy with six goals and two assists in 31 Serie A matches. A particular personal highlight from his first season was from Milan’s 3-1 defeat to Fiorentina in September 2019, when he dribbled past three players to score his first-ever Serie A goal.

The Portuguese forward produced similar numbers in the 2020/21 Serie A campaign, scoring six goals in 30 games while also supplying six assists, and he also scored once in seven Europa League appearances. It was another season of Leão alternating between the left-wing and center-forward positions. Rebić, like in 2019/20 registered 11 Serie A goals for 2020/21, while Ibrahimović scored 15 goals in just 19 league appearances.

Despite standing at 1.88 m tall, it was becoming more apparent that Leão could not operate like a traditional center-forward. The Portuguese youngster demonstrated that he was best suited to using his pace and technical skills to dribble past opponents as well as make runs into the box as opposed to being the reference point in attack.

For the 2021/22 season so far, Pioli has made Leão his first-choice left-winger and the 22-year-old has made the most of his regular playing time. He has scored four times in Serie A and supplied an assist, and he is often eye-catching even when he is not directly involved in the goals.

He is confident in dribbling past players and he has confidence in his shooting ability regardless of the distance or angle. His form for Milan has also resulted in Leão earning his first two senior caps for Portugal after years as a youth international, providing an assist on debut in his country’s 3-0 win against Qatar in a friendly.

Leão’s goal in the 2-0 victory against Lazio in Week 3 was an impressive effort, where he collected the ball from his own half, beat a defender, played a one-two with Rebić, paused after receiving the pass from the Croatian, and slotted the ball into the net.

Another great goal of his was the opening goal in AC Milan’s 4-2 win away to Bologna in Week 9, when the Portuguese winger ran onto a through-ball from Ibrahimović, beat a defender, and scored from a tight angle with his left-foot. Although the shot had been given a deflection, he was still credited with the goal, and the audacity to shoot from where he did, had to be admired.

Leão has also produced his share of nearly goals as well, efforts that were so amazing, that they could have been Goal of the Year contenders if the ball had gone in. Probably the most incredible of them all was in AC Milan’s controversial 2-1 defeat to Atletico Madrid in the UEFA Champions League.

The 22-year-old had opened the scoring with a daisycutter and he nearly made it 2-0 when he flicked the ball in the air and performed an acrobatic bicycle kick which hit the crossbar. Who knows what would have happened if the ball had found the back of the net?

Although the expectations from Alexis Saelemaekers might seem excessive for now, there is still a lot to like about Rafael Leão. He is still a raw player but his form so far in 2021/22 suggests that he is starting to become a polished product.