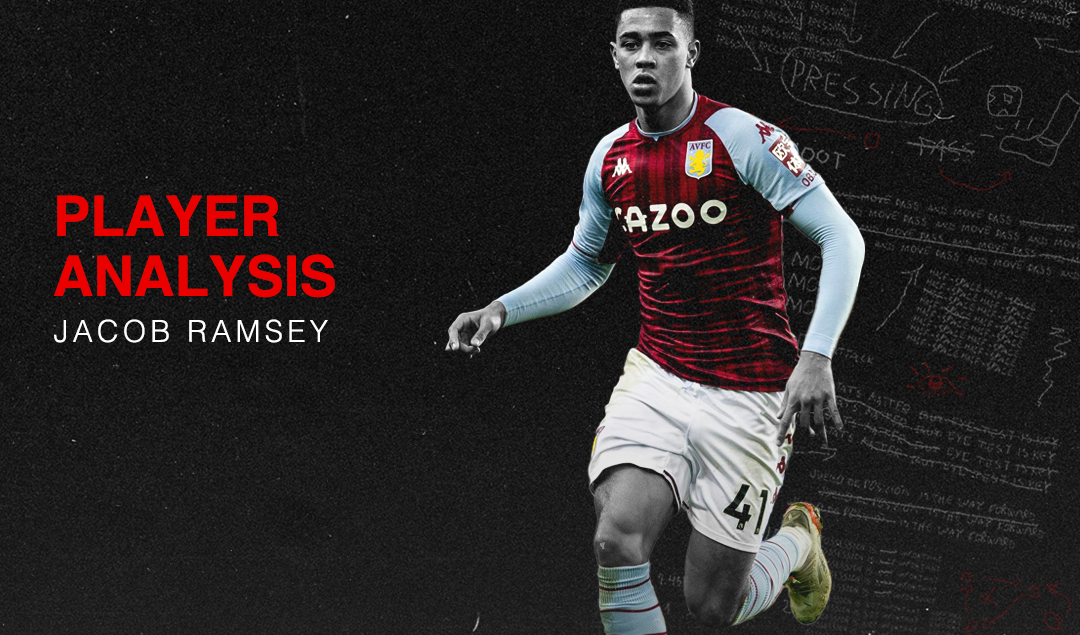 “People talk about stats a lot nowadays and I guess if you looked at mine you’d probably say they weren’t great,” the words of Aston Villa youngster, Jacob Ramsey.

Despite the midfielder’s frank assessment of his statistical performance this season, Ramsey has transformed from a useful squad player under Dean Smith into a crucial cog of Steven Gerrard’s first team. Now with an England call possibly lurking, the future’s looking bright for the 20-year-old.

After featuring sparingly under Dean Smith, Jacob Ramsey was stamped into the Aston Villa first team for Steven Gerrard’s opening match as Aston Villa manager. Acting as the left central midfielder in a 4-3-3. The Midlands club haven’t looked back. They’re picking up 0.54 more points per game so far under the reign of the Liverpudlian.

A large ailment to Aston Villa’s woes was their midfield. Thankfully, Gerrard has devised a perfectly balanced midfield, with Ramsey acting as a number 8/10 hybrid, with John McGinn on the other side operating slightly deeper and Douglas Luiz anchoring.

Ramsey is crucial to such equilibrium. He possesses brilliant footballing intelligence, with a sense of when to push up closer to the centre forward, and when to play between the lines. The full extent of Ramsey’s attacking intelligence can be seen in his involvement in Villa’s revival against Manchester United.

For his equalizing, Ramsey found himself in an advanced central area outside the penalty box, he ghosted outside of Varane’s eye-line and away from the ball to open a pocket for himself to receive the ball, and subsequently shoot and score.

For the 2nd goal, Ramsey filled the void left by pressing Victor Lindelof, running off Nemanja Matic’s shoulder and into the space. These traits are indicative of a player that excels at off-the-ball movement.

As such, Ramsey always seems to have space in the box to receive the ball, hence why he manages 2.25 touches in the opponent’s penalty area per 90, ranking him in the 77th percentile for Premier League midfielders.

Despite his own humble critique of his stats, Ramsey is managing 0.23 goals per 90 and an xG of 0.14 per 90, placing him in the top 18% of Premier League midfielders for goalscoring.

Against Manchester United, Ramsey showcased his passing ability with a perfectly slid ball past the flailing legs of Raphael Varane into the path of Philippe Coutinho to score. Unfortunately, this asset hasn’t become a formality of the Englishmen’s game. He currently completes 29 passes per 90, placing him in the 21st percentile of Premier League midfielders.

Even in the final third, where Ramsey’s movement causes havoc, his passing still lays bare in comparison. So far this season he has only completed 0.78 key passes per 90 – that is passes that directly lead to a shot. For reference, McGinn has managed 1.52 key passes per 90.

“He can be as good as he wants to be,” insisted Gerrard after Ramsey’s magnificent goal against Norwich.

If the finish was admirable, the run was remarkable. The midfielder received the ball deep in his own half, driving forward before exchanging a sharp one-two with Ollie Watkins, and then powering into the Norwich penalty area and shifting the ball onto his left foot.

He is a strong, willing carrier of the ball, indicated by his 6.14 progressive carries per 90, in the top 17% of Premier League midfielders. The goal against Norwich signaled the best parts of Ramsey’s game: the intensity, quick combinations, pace and eagerness to enter the opposition’s final third.

Ramsey’s enthusiasm to break into attacking areas is demonstrated by his volume of touches across the pitch. 39% of Ramsey’s touches come in the final third.

Whereas only 54% of his touches come in the middle third, such a large proportion of touches higher up the pitch, highlights the extent to which Ramsey plays as a goalscoring midfielder, rather than one dedicated to knitting attacks together from deep.

It’s easy to forget that Ramsey broke through as an attacking midfielder, both for Villa and during his time at Doncaster.

The typical flair and speed of thought are present in the youngster’s game, but that is fused with a ruthless tenacity and determination to defend.

Considering that Ramsey’s father, Mark, was a professional boxer, we shouldn’t be surprised by the grit and work-rate shown by the midfielder.

The burden of Villa’s defensive work in the engine room falls on Douglas Luiz, but Ramsey still provides a useful foil to opposition attacks with 1.32 tackles won per 90, just below average for Premier League midfielders.

However, Ramsey’s work-rate is his most valuable defensive asset. Gerrard has deployed Ramsey as Villa’s most aggressive presser. The Englishman’s 3.89 pressures per 90 in the attacking third, ranks in the 77th percentile for Premier League midfielders.

John McGinn is the only Aston Villa midfielder to make more pressures in the attacking third than Ramsey, and only because the Scottish international has had nearly 25% more game time this season.

The perfect way to describe Ramsey’s game is raw, not necessarily in the negative sense. Instead, Ramsey’s exuberance works to his benefit. He plays on instinct, always looking to cause chaos in the opposition’s defence.

His combination of attacking intent, intelligence, combination play and purposeful runs has added unpredictability to Villa’s attacking play. By no means is Ramsey close to being the finished article, his passing can be rash, perhaps too often his head is working quicker than his feet.

Fortunately, under the stewardship of the former talismanic midfielder, Steven Gerrard, the 20-year-old can iron out the creases in his game and announce himself as the next local boy who stole the hearts of the Villa Park faithful.