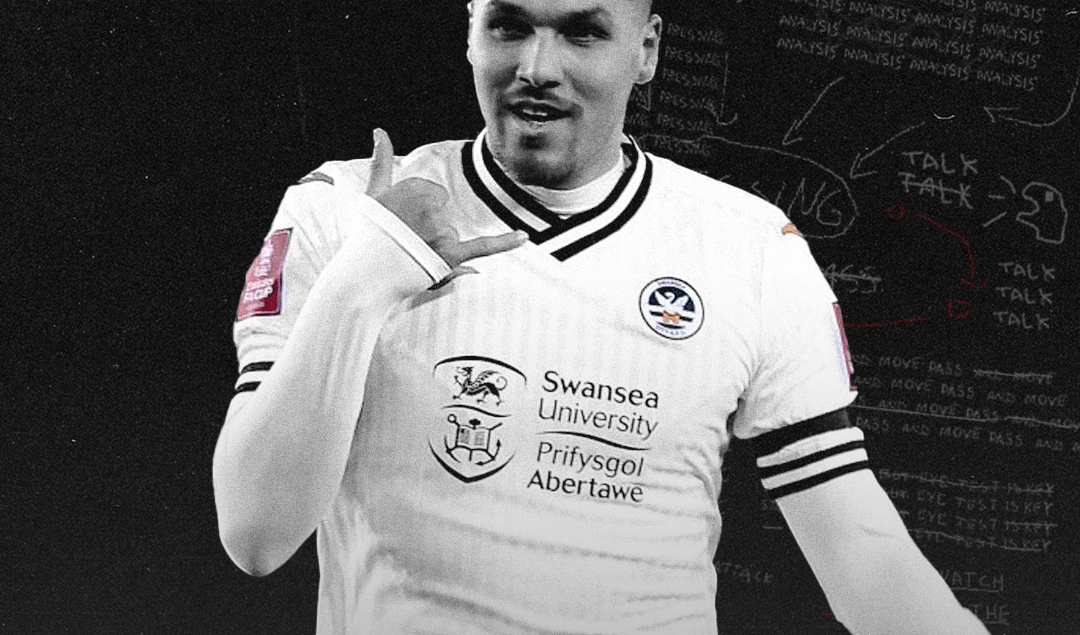 Swansea’s new era under Russell Martin has been a slow-burning one, but still a project that provides promise for fans of the South Wales club.

Although they look set for a lower mid-table finish in the EFL Championship, they have found a worthy striker that could well top the goalscoring charts.

Joel Piroe has notched 22 goals with only one game to play in his first second tier season, the highest single season total from a Dutch player in the division.

A debut season of dreams for the striker, and there’s a feeling that overall improvement of the squad will further enhance his goalscoring tally.

However, with recent interest from Leicester City circulating, it’s a wonder as to whether Piroe will get his Premier League move sooner rather than later.

Beginning his career as a left-sided defender, the striker provides a defensive anchor in the forward line in equal measure as he does attacking prowess. His journey into the football world mean he mixed with amateur clubs such as SEC Nijmegen, Quick 1888 and SC Woezik before finding a professional academy home.

NEC Nijmegen decided to sign the youngster, with their under-12’s coach opting to move Piroe up the pitch and into the forward line, with him showing that natural finishing ability in the defensive areas. After a short spell at Feynoord, the forward swapped one top Dutch academy for another with PSV calling to offer the young striker a pathway into their first team.

Prior to making his Jong PSV debut, he progressed through the Netherlands’ youth ranks, making under-15, under-16 and under-18’s caps whilst notching a single goal in that time. His Jong PSV career was a long-lasting one with the striker making over 50 appearances for the Lempkes’ second team.

However he didn’t exactly provide a huge goalscoring touch in the Eerste Divisie, only grabbing 16 goals throughout his time with the club. Coached by former prolific striker Ruud Van Nistelrooy during his time with the Boeren, his natural finishing touch and knack of connecting with pull back shots from the byline meant he showed those glimpses of a top level striker.

Despite possessing smart footwork and all the finishing traits necessary to elevate himself into the PSV first team squad it never quite worked out for him.

Only managing 11 appearances before being loaned to Sparta Rotterdam, the temporary switch sealed his fate with the Dutch club, acting as a strong indication that he wasn’t going to steal the starting spot from the likes of Donyell Malen and Steven Bergwijn.

It was evident that the coaches preferred other, slightly quicker options to bulk out the forward line, with the move to Rotterdam promising a first real taste of action.

However, he only managed two strikes throughout his time at Het Kasteel meaning the belief that regular first team minutes would lead to a run of form for Piroe – was fading.

After his lower Eredivise move, another spell back at PSV where he bagged three goals lead him to contemplate his future at Philips Stadion. Up stepped Russell Martin’s Swansea City, with a move that in hindsight proved to be an incredible piece of scouting.

A fee of around £1,000,000 settled the deal, a fairly hefty tag coupled with the expectation placed upon the striker’s shoulders considering he hadn’t played in England before. But Russell Martin believed that the Dutchman could provide the finishing touch in his line-up with Piroe set to become a regular starter in the Swans side.

He hit the ground running in only the second appearance at the club, although not in the circumstances he would’ve hoped for. A header back across goal that nestled into the back of the net meant the Swans grabbed a consolation in a 3-1 home defeat to Stoke City.

Three goals in his first three games meant his time at the Swansea City Stadium had got off to a flying start, with fans of the South Wales club heralding a new hero. Throughout the season they became accustomed to his close control and composure when in pressurised potential goalscoring situations.

A trait that had most been associated with him is his runs along the defensive line, with the likes of Jamie Patterson finding him with acute through balls when gaps could be breached.

Finishing the campaign on 22 goals there was a feeling among supporters and onlookers that perhaps in a side more direct in their attacking play, or better still, had more creative players surrounding him – he may have gone on to match those higher up in the second tier scoring ranks.

Martin’s outfit had the highest average possession during the season, accumulating 63.9% of the ball per game. And as admirable as that is, perhaps to increase their scoring rate (including Piroe’s) they might need to be a bit more cutthroat in attack whilst also keeping the ball and dominating games.

But Piroe has his admirers now, with Leicester taking a look at him whilst they hunt for Jamie Vardy’s potential successor. However, the Swans’ boss should do everything in his power to ensure the Dutchman sticks through the project that he is undertaking.