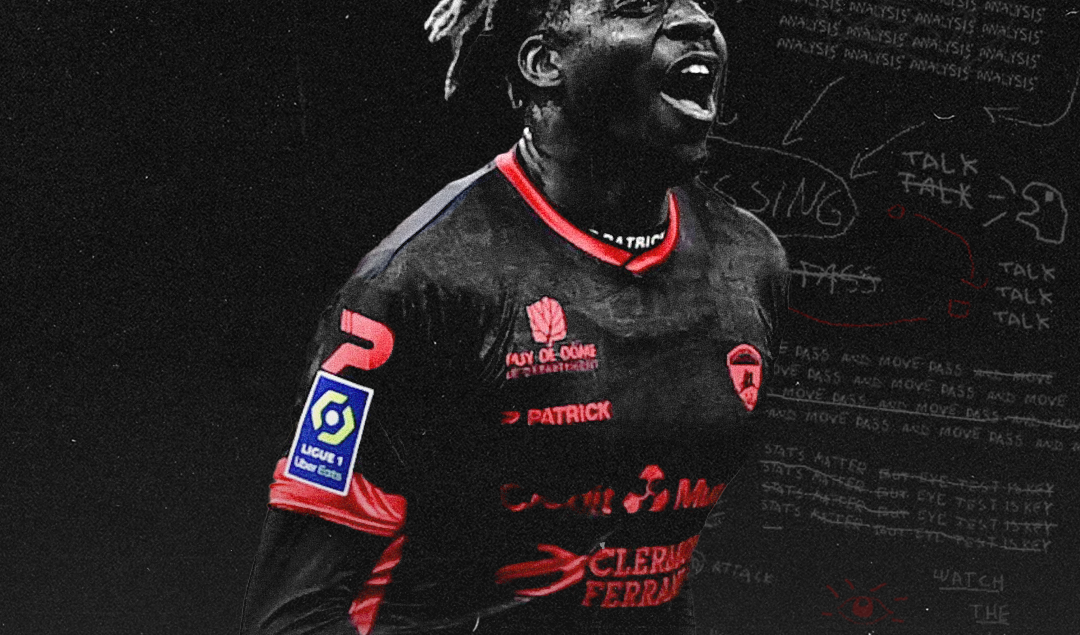 Clermont Foot have managed to fill 76% of their available stadium capacity across the 21/22 season. That’s the sixth-best attendance in Ligue 1 but in all honesty, if it wasn’t for striker Mohamed Bayo, the attendance (and Clermont’s place in Ligue 1) would sink.

The 23-year-old Guinea forward is responsible for ten league goals this season, or 38.5% of Pascal Gastien’s side’s total output.

This isn’t anything Clermont fans will be too concerned by, as this is their first season in the French top flight in their 111 year history. There’s an acceptance that Bayo is probably too good for the club on current form, in a city more famed for its history and volcanoes.

He is sitting in the top 40 across Europe’s big five leagues for goals scored minus penalty kicks (8), and is one of only a handful of players to be hitting high in that list who aren’t fighting in relegation sides.

Further statistics paint an even grander picture of Bayo’s contribution this season. The French-born star is Clermont’s top scorer, top for non-penalty expected-goals, top for shots on target, and when he went away to AFCON Clermont scored just two goals in five games.

Bayo was born in Clermont, then joining the side when he was six years old. He even scored 12 goals to get them promoted from Ligue 2 in 20/21, and now he’s keeping them in the top flight.

It’s no wonder then as to why West Ham were sniffing around his availability in the January transfer window, before Clermont reportedly shut down any possibility of an exit.

A court case regarding a car accident while Bayo was driving over the legal alcohol limit also hangs over the striker, with a hearing set for June 2022. Should that case end in no perturbing consequences, it’s like Bayo will be leaving Clermont by August.

The question is though, is it going to be worth bringing him in? The answer should be a no brainer, but we have seen other forwards fail in recent high-profile moods.

Donyell Malen, Myron Boadu, Timo Werner, even Memphis Depay all hoped to succeed at teams seen as a step up. Yet they remain the evidence of how wrong a transfer can go. Will Bayo be another Myron Boadu, or can he make it at the top level?

In a recent interview with Ligue 1’s official channels, Bayo was asked about the fresh crop strikers emerging in France, such as himself or Hugo Ekitike. Bayo remarked, “I’m happy, but it’s not easy being a striker! Everyone takes potshots at you, but when you score, you are the king.”

That small remark may be a little more of a mantra for Bayo. In every game he plays, Bayo is constantly hunting space, looking to get into goal-scoring chances.

This isn’t a player who is taking on his man, or bulldozing defenders out of the way. In fact, just under half of his goals have come from inside the six-yard box. This is interesting in and of itself.

A newly promoted side shouldn’t be getting the service that allows someone to score from this range consistently, especially in open play. Credit to Clermont though, because they’re actually in the top 10 of Ligue 1 for shots per-90. Only Rennes and Strasbourg have completed more crosses into the box too.

Bayo tips the top of the 4-2-3-1 formation Gastien has deployed on over 20 occasions in the league this season. The goal vs Monaco in their first bout with Clermont this season demonstrated Bayo’s match intelligence.

He makes getting into the right position appear too easy, and with the one-touch finish, Bayo provides a clinical edge. That one-touch finish is something he appears to have mastered too.

Another fascinating aspect noticed when studying Bayo’s goals, is that he seems to have a tendency for firing shots into the roof of the net. Goals against Monaco, Nantes, Saint Etienne, Lens and most recently Marseille all showcased Bayo powering the ball up.

This has helped him score goals at close range, especially at the near post often leaving the goalkeeper with little chance. His finish vs Saint Etienne is shown as another example below.

No goalkeeper would have stopped that… 🚀 pic.twitter.com/nhdNTYbS0r

Do the Stats Back Up the Form?

Mohamed Bayo should excite the analytics crowd, as he is performing perfectly on par with his non-penalty expected goals per-90. That’s the measure of the average quality of shot Bayo is taking, and should he be outperforming his XG, then we could assume that Bayo was scoring at an unsustainable rate.

He’s actually in the top five for NPXGp90 in all of France, and interestingly he ranks as high as Jonathan David in NPXG/per shot, i.e the quality of Bayo’s average shooting chance. It backs up the idea that he is great at getting into goal-scoring positions.

On the other hand, the data does reveal that Bayo needs to contribute more to his team aside from goals. He ranks low for most metrics besides goalscoring. Watching him shows that he is a sharp, agile player, so it’s also interesting on how low he ranks for dribbles completed p90.

That could simply be due to his positioning and touches p90, with only Clermont’s goalkeeper touching the ball less times p90. Perhaps at another team, Bayo could improve his dribble output.

What’s the Verdict on Bayo?

With the data & eye test backing up the idea that Bayo is a regular, intelligent goalscorer, the last bits to work out are the intangibles. Which club could he go to? Are there any issues under the surface?

Mentioned earlier was the court case hanging over Bayo. The full details have not been released, but Bayo did come out and address them, calling the incident a ‘mistake’.

It feels like a stretch to park Bayo into a team that isn’t counter-attacking. Clermont Foot do hold more of the ball than your average promoted side, but they’re far from Manchester City or Chelsea. It’s unclear how Bayo would play against a more regularly-crowded penalty area.

Those previous links to West Ham make a lot of sense. They feel like a team close to Clermont in terms of playstyle, as both teams are primarily counter-attacking ones but with the quality to unlock some defences in possession.

Another, more rogue shout, is Inter Milan. In 2023, Edin Dzeko and Alexis Sanchez will see their contracts end at the San Siro, and we don’t know how much time Lautaro Martinez has left in Milan.

He could continue to play there for his remaining prime years, or the 24-year-old could be tempted by a move elsewhere.

Bayo feels like a great fit for a team that still have Conte’s tactics running through their blood, even if Simone Inzaghi has successfully implemented some ideas of his own. Bayo would represent a cheap option too.

Wherever he goes, Bayo will be looking to hit the ground quickly. He will be 24 in June. He’s not a youngster anymore, and he will be expected to hit his best output sooner rather than later.