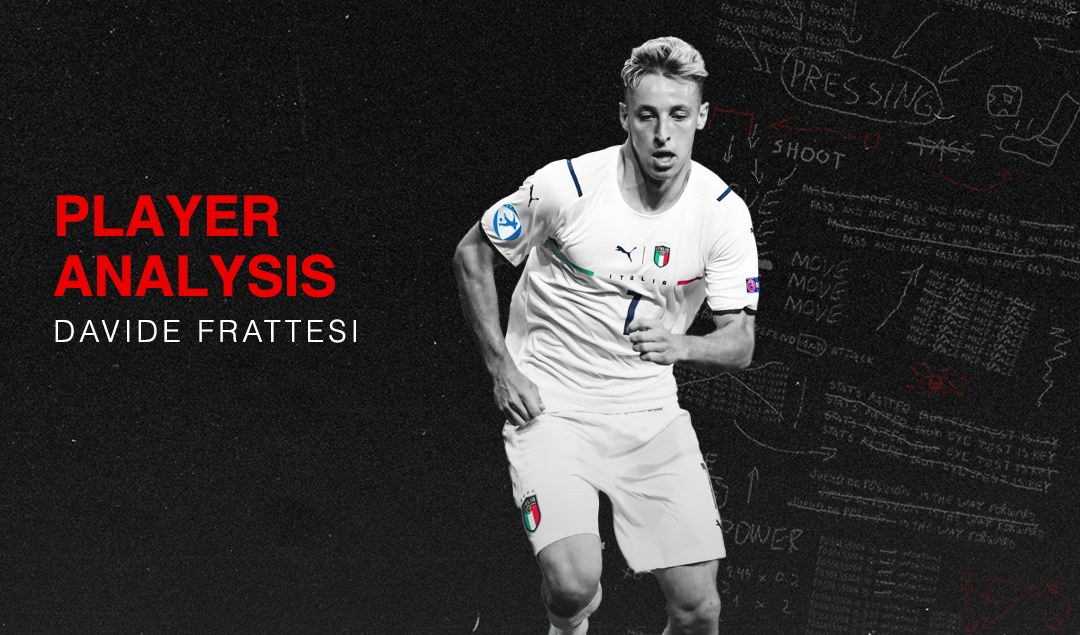 Ever since it was promoted to Serie A nearly a decade ago, Sassuolo has been a club that has nurtured an abundance of young talent and it has often prioritized Italian players instead of looking for hidden gems from aboard like its counterparts.

While playing for the club in the Emilia-Romagna region in Italy, the likes of Domenico Berardi, Simone Zaza, Lorenzo Pellegrini, Manuel Locatelli, and Giacomo Raspadori as well as late bloomer Francesco Caputo were able to break into the Italian national team.

Another player who is looking to follow in their footsteps is 21-year-old central midfielder Davide Frattesi. Having earned 56 caps for Italy so far at various youth levels and recently making his Serie A debut, the Rome native will be hoping that he can find his senior international breakthrough based on his form with the Neroverdi.

Frattesi had initially come through the Lazio youth system but he had switched allegiances in 2014 and joined the Roma ranks. His form with the Giallorossi earned him his first Italy youth cap in December 2015 – representing the Under-17 team – he played in their Coppa Italia Primavera triumph in the 2016/17 season, and he was purchased by Sassuolo in the summer of 2017 for €5 million.

He made his senior debut and only Neroverdi appearance for the 2017/18 campaign in a 2-1 defeat to Atalanta in the Coppa Italia in December 2017, then spent the remainder of the season with the Primavera team. Despite playing just nine times in the league, he scored four goals and provided an assist, and he was selected for the 2018 European U-19 Championship for Italy by Coach Paolo Nicolato.

Nicolato has gone on to coach Frattesi at various youth levels and the Under-19 tournament was one in which the midfielder would go on to play a prominent role. Frattesi came off the bench in the 1-0 victory against Finland in Italy’s opening Group A game but the coach would start him for all of the remaining matches.

The Azzurrini defeated Portugal in their second group game with Frattesi scoring a goal and setting up another. They would face the Portuguese again in the final but the Lusitanians emerged victorious with a 4-3 win after extra time.

For the 2018/19 campaign, it was decided that the central midfielder would go on loan to Ascoli in Serie B and the club from The Marches would go on to finish 13th in the league. The Rome native played 32 matches in the Cadetti that season and supplied two assists.

After that spell with Ascoli, Frattesi went on to represent Italy at the 2019 FIFA U-20 World Cup. Nicolato’s predecessor Alberico Evani guided the Under-20 side to third place at the tournament two years earlier, but the Italians were not able to better that performance, losing 1-0 to eventual winners Ukraine in the semi-finals and then suffering a 1-0 defeat to Ecuador in the Third Place Play-off.

It was a positive tournament for the Sassuolo-owned midfielder nevertheless, who made six appearances, scored twice, and also captained the team in its final Group B match, a 0-0 draw against Japan.

Empoli was the next club for Frattesi, and he spent the 2019/20 season on loan at the Serie B club, which had just been relegated from Serie A. The Tuscans finished seventh in the Cadetti, and faced Chievo Verona in the play-offs, but the Veneto side progressed to the next stage despite a 1-1 draw due to a higher finish in the league table. Throughout the campaign, the midfielder scored five goals and provided four assists in 37 league games and he featured for 52 minutes of that play-off match.

Frattesi was earning valuable playing time and gaining experience, but Sassuolo decided to loan the midfielder for the third time, this time to Monza for the 2020/21 season. The club from the Lombardy region had earned promotion from Serie C and former AC Milan president Silvio Berlusconi, who now owns the Brianzoli, wanted to build a team capable of earning promotion to Serie A for the first time in its history.

Monza finished third in the Serie B table, missing out on automatic promotion by five points. The Rome native improved in his goalscoring from the previous season at Empoli, scoring eight goals in 37 league games and he also supplied two assists.

Monza and its Milanese Connection

In the second round of the play-offs, Monza faced Cittadella and Frattesi played in both legs against the club from the Veneto region. The first leg provided a shock to the system as Cittadella earned a surprise 3-0 victory, and despite losing 2-0 in the second, they progressed at the expense of the Brianzoli.

The Rome native continued to make a presence at youth level for Italy, and he represented the Azzurrini at the 2021 European U-21 Championship, making four appearances and providing three assists as they went on to reach the quarter-finals.

Portugal once again proved to be the nemesis for Nicolato and Frattesi, defeating the Italians 5-3 after extra time. In a match filled with goalmouth drama, it was also a match in which the Azzurrini earned four yellow cards and a red card for center-back Matteo Lovato.

For the Italian midfielder, the defeat clearly felt unjust. “My tears are those of a boy who, for five years, worked well to get to this event,” Frattesi said after the match. “As long as there were eleven of us, we proved that we are not inferior to Portugal. We were probably even better off.”

“One episode disadvantaged us one and they, then, with the quality they came out in eleven against ten. The disappointment remains but there is also a bit of happiness because this is a group that has come a long way and that has given everything. We can’t blame ourselves for anything.”

Despite the defeat, Frattesi paid tribute to Nicolato, who has guided him from the Under-19 to Under-21 level. “Indescribable. Giant,” he said. “I spent five years with him and he became my second father. My tears are more for him than for defeat. I owe him a lot.”

The 21-year-old current has 10 caps for the Italy U-21 team, and he has scored twice, both goals coming on his debut against Moldova in a friendly which Italy won 4-0 in September 2019. Although Frattesi was not able to guide Monza into Serie A, it was decided that he would not be loaned out anymore. Sassuolo coach Roberto De Zerbi left for Ukrainian club Shakhtar Donetsk, and he was replaced by Alessio Dionisi, who had brought Empoli back into Italy’s top flight.

The Neroverdi commenced the 2021/22 Serie A season with a 3-2 victory away to Hellas Verona and Frattesi impressed in the midfield double pivot with Maxime Lopez. He played for 84 minutes, took four shots, and completed 44 passes with a success rate of 93.2 percent, one of the highest in the team. Considering how deep the midfielder plays, it is quite impressive to see how he moves into positions to shoot and distance is not something that worries him either.

After doing all the hard work in Serie B, Frattesi might finally establish himself as a Serie A football and Sassuolo is a club that will grant him ample opportunities to do so. He has also gained valuable international experience with Italy at youth level but playing for the Neroverdi might be what he needs to finally gain that place with the seniors.