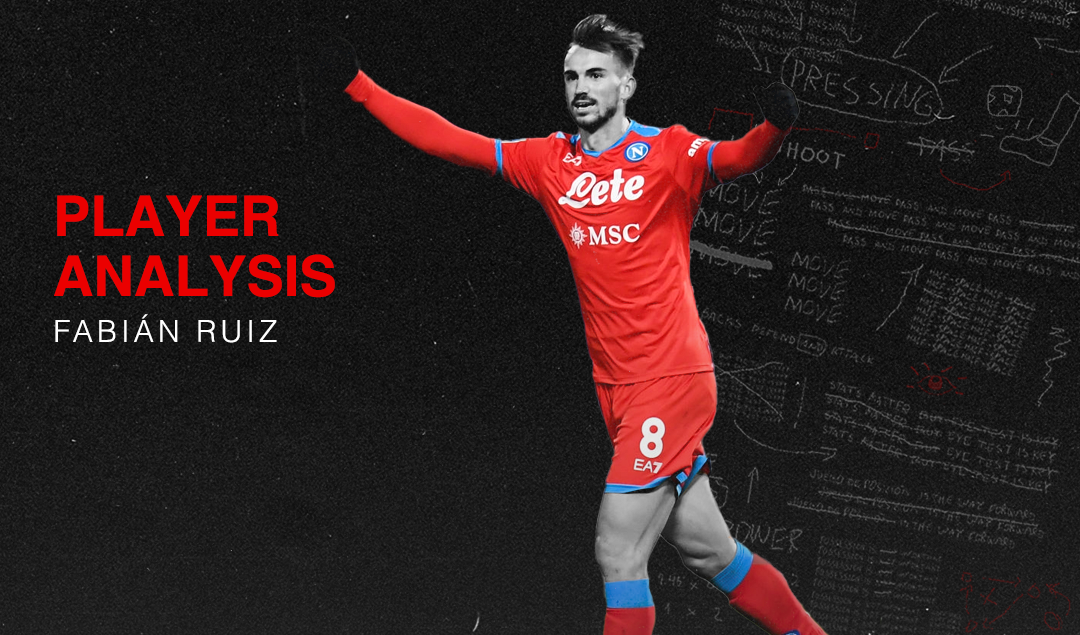 Napoli has had an impressive start to the 2021/22 Serie A season, having sat on top of the table from Rounds 4 until 15 until it suffered a 3-2 defeat to Atalanta in Week 16. The Partenopei are still just four points behind league leaders Inter and they have been a competitive team under new coach Luciano Spalletti.

One of the many Napoli players that has benefitted from the appointment of Spalletti as coach is Spanish midfielder Fabián Ruiz. The 25-year-old deep-lying playmaker has been an integral part of the Partenopei’s attacking play and developed an understanding with his fellow midfielders in Spalletti’s set-up.

Since replacing Gennaro Gattuso after the conclusion of the 2020/21 season, Spalletti has alternated between his preferred 4-2-3-1 formation and the 4-3-3, which was regularly implemented by his predecessor.

When Napoli play in the 4-2-3-1 formation, Ruiz is positioned in the double pivot in midfield. Originally, Diego Demme was meant to be his partner in the center of the park, but a pre-season injury to the Italo-German defensive midfielder changed that.

André Zambo Anguissa arrived on loan from English club Fulham in August and the Cameroonian midfielder has been a revelation for the Neapolitans. Not only is the 26-year-old a great ball-winner, he is a capable ball-carrier that can dribble past opponents comfortably. Anguissa also likes to perform the odd trick without getting himself into trouble and turning the ball over in dangerous positions.

The presence of the Cameroonian in the Napoli midfield has been beneficial for the team and his characteristics complement Ruiz perfectly. While Anguissa provides industry and directness in midfield, Ruiz can focus on controlling the tempo, picking the right passing options, and also getting into positions to shoot from long range.

Anguissa has not featured since the 3-2 defeat to Inter in Week 13 due to an abductor muscle injury, but Stanislav Lobotka has been an adequate deputy, which allows Ruiz to keep focusing on the attacking aspects of the game. When Spalletti has switched to a conventional 4-3-3 formation, Ruiz plays in the middle of the midfield trio and he is flanked by Anguissa and Polish attacking midfielder Piotr Zieliński.

If anything, it does not change Ruiz’s role too much, but the role of Zieliński, who has to attack from a deep position than he would in the 4-2-3-1, and the wingers are higher up the pitch. Nonetheless, when Napoli thrashed Sampdoria 4-0 in Week 5, Spalletti implemented the 4-3-3 formation and both Ruiz and Zieliński were still able to feature among the goalscorers.

Ruiz came off injured in the 2-2 draw against Sassuolo due to a groin injury. His loss was immediately felt as the Partenopei were 2-0 up when he was replaced by Matteo Politano in the 66th minute and the Neroverdi earned an unlikely draw thanks to goals from Gianluca Scamacca and Gian Marco Ferrari.

The absence of Ruiz in midfield in addition to Anguissa forced Spalletti to switch to a 3-4-3 formation against Atalanta in Week 16. Whether it was to mirror the approach of La Dea tactician Gian Piero Gasperini or due to missing his two best midfielders, Spalletti ditched his preferred formations, and despite leading at one stage, it ultimately failed as the Neapolitans lost 3-2 at home to the Bergamaschi.

In 15 Serie A games in 2021/22, Ruiz has already scored five goals, already equaling his career-best in a league campaign from 2018/19, when he played 27 times in Serie A in his first season in Naples. He has provided two assists so far, but there is still time for him to equal or better his tally of six league assists, which he registered with Real Betis in 2017/18 in La Liga and 2019/20 for Napoli.

According to WhoScored, Ruiz has also had a successful passing rate of 91.6 percent, and averaged 1.4 shots, 74.3 passes, 4.9 long balls, 1.3 key passes, 1.9 tackles, and 0.9 interceptions per game. In most of those aspects, he is currently at his career-best or close to it.

His passing rate of 91.6 percent and average of 74.3 passes per game are career highs. Ruiz has demonstrated his ability to be the fulcrum of the Napoli midfield with the quantity and the quality of his passes. Napoli’s passing is shorter than what was under Gattuso and the Partenopei are more comfortable with their possession play under Spalletti.

Ruiz is averaging 4.9 long balls per game, once again displaying his ability to hit a long pass or play one of his exquisite through-balls. His ability to thread the ball through an abundance of opponents is a great example of how he is able to see his teammates in space, even from a far distance. His career-best in Serie A was 5.2 per game under Gattuso in 2020/21, who wanted a more direct approach compared to Spalletti.

His passing ability this season has been great but the focus on that has perhaps diminished the importance or need for him to dribble. He has only averaged 0.3 dribbles per game in Serie A this season, a long way off his career-best in a league campaign. During the 2017/18 La Liga campaign, he averaged two dribbles per game at Real Betis.

Ruiz’s average of 1.3 key passes per game is a long way off the 2.3 that he registered in his first season at Napoli under Carlo Ancelotti. This might have been due to his positioning in Ancelotti’s 4-4-2 formation.

Fabián Ruiz is in his fourth season with Napoli and despite providing some impressive performances in the past, being coached by someone like Spalletti and the Neapolitans fighting for the Serie A title has increased his value and importance.

The Spaniard is one of the best creators in Serie A and if the Partenopei win their first league title since 1989/90, surely his metronomic abilities will have made a significant contribution.