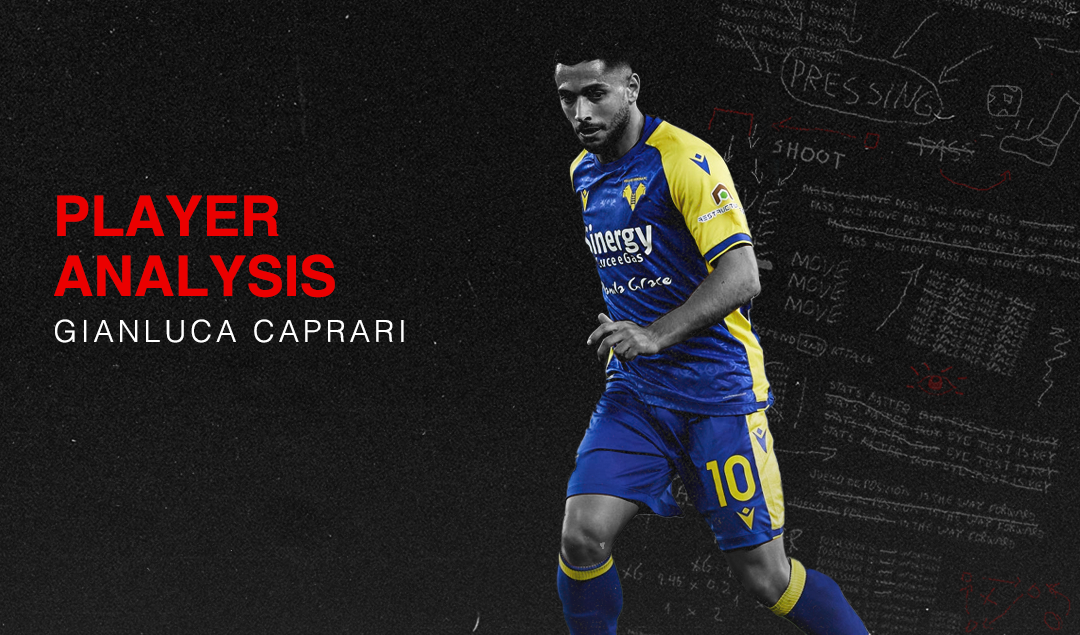 When Pescara won the 2011/12 Serie B title, it had done so playing with great panache under Czech coach Zdeněk Zeman and a crop of young Italian youngsters emerged under his tutelage.

Creative midfielder Marco Verratti as well as forwards Ciro Immobile and Lorenzo Insigne starred for the Delfini in Italy’s second division throughout that campaign, and have had successful careers elsewhere. The trio also featured in Italy’s triumph at Euro 2020 and the three players started in the final against England.

Another youngster that had emerged during the 2011/12 campaign at Pescara, but has not gone on to reach the same heights of Verratti, Immobile, and Insigne in their careers is Gianluca Caprari. The 28-year-old has become a football journeyman with a career littered with loan spells, but he is displaying a level of consistency at Hellas Verona that has rarely been seen at his other clubs.

Caprari has scored three goals and provided four assists in nine Serie A matches so far in the 2021/22 season for the Gialloblù, but he has still produced fine performances in games even when he has not been directly involved in the goals.

Under the guidance of Croatian tactician Igor Tudor, Verona has emerged as a dark horse for a UEFA Europa League or Conference League place. Caprari in the early stages of the campaign has been a key part of that but the idea of the Rome native being a key part in any team at Serie A level has been hard to visualize at times.

Caprari was a graduate from the Roma youth academy, and he had played with the likes of Alessandro Florenzi, Matteo Politano, Valerio Verre, and Federico Barba, who have had varying degrees of success playing in Serie A. He had appeared twice for the Primavera squad in the 2009/10 league campaign but he went on to earn more playing time in the following season.

Operating as a trequartista or attacking midfielder in the 4-2-3-1 formation under Coach Alberto De Rossi, Caprari found the back of the net six times in 20 league games as the Giallorossi went on to win the title and he also scored three times at the prestigious Viareggio Cup.

In addition to his performances with the Primavera, he also made two substitute appearances for the senior team towards the end of the 2010/11 Serie A campaign. New coach Luis Enrique gave the youngster some chances early in the 2011/12 season before returning to youth football. Caprari played in both legs when Slovan Bratislava eliminated Roma from the qualifying round of the Europa League and he also made another Serie A appearance.

After scoring six goals in 11 Primavera league matches, Roma decided to loan the youngster to Pescara for the second half of the season. Zeman had his settled attacking trident of Marco Sansovini, Immobile, and Insigne, but Caprari became the preferred super-sub, usually taking the place of Sansovini and scoring three goals in 14 Serie B matches.

Zeman, Sansovini, Immobile, and Insigne had left the Delfini at the end of the 2011/12 campaign while Verratti was sold to French giants Paris Saint-Germain. Meanwhile, Caprari remained at the club after Pescara entered a co-ownership deal for the versatile forward. It was a season to forget in Serie A as the club from the Abruzzo region in central Italy finished at the bottom of the table while the Roman scored just twice in 24 league games.

Roma bought the other half of his contract from Pescara but he only appearance once in Serie A for the 2013/14 season. The Delfini brought him back to Abruzzo for the second half of the campaign and they acquired him outright for a reported fee of €1.75 million. The next 18 months were a struggle for Caprari at Pescara but the 2015/16 Serie B campaign turned out to be something special for the Delfini and their Roman forward.

Pescara finished fourth in the league under Coach Massimo Oddo and earned promotion after eliminating Trapani in the final of the Serie B play-offs. It was a team that included players like Verre, Ledian Memushaj, Rolando Mandragora, and Lucas Torreira while Caprari operating as a support striker developed an outstanding partnership with Gianluca Lapadula.

How Ciro Immobile Became One of Europe’s Most Deadly Strikers

Lapadula finished as the leading goalscorer in Serie B with 27 goals in 40 games and he also supplied 11 assists. The now Peruvian international also scored three goals in four play-off games. Caprari found the back of the net 13 times in 38 games and provided 12 assists while also supplying an assist in the play-offs too.

AC Milan purchased Lapadula for the 2016/17 campaign and he earned some playing time there whereas Inter decided to acquire Caprari for €8.25 million but he went back on loan to Pescara. Caprari would operate either as a winger or false nine under Oddo and then Zeman for the 2016/17 season, scoring nine goals in 35 games, but without Lapadula, Pescara finished on the bottom of the Serie A table once again.

The Roman never got the chance to play for Inter as he was involved in a transfer deal that sent him to Sampdoria while center-back Milan Škriniar went in the opposite direction. Under coach Marco Giampaolo, Caprari was used as either a support striker or an attacking midfielder, depending on who else was available or where he was needed most.

He finished the 2017/18 Serie A campaign with five goals in 34 games, including a spell of three goals in a five-match spell, and also scored twice in three Coppa Italia appearances. A leg injury limited his league appearances during the 2018/19 campaign but Caprari managed to score six goals in 21 Serie A games, and his form, especially when he played as a trequartista, was enough to earn him a call-up to the Italy national team.

After Giampaolo left for AC Milan, the versatile forward struggled to perform well under Eusebio Di Francesco and his successor Claudio Ranieri. He spent the first half of the 2019/20 season at Sampdoria, scoring three times, but he was loaned out to Parma for the second half of the campaign, finding the back of the net another two times.

Caprari was sent for another loan spell in 2020/21, this time to Benevento, who had been promoted from Serie B. He was reunited with Lapadula, who he developed a great understanding with at Pescara, but they could not produce the same magic that they did in Abruzzo. The Stregoni were relegated at the end of the season while Caprari could only score five times in 30 Serie A games for the club from Campania in southern Italy.

Although he made an appearance for Sampdoria in the Coppa Italia at the start of this season, the 28-year-old was on the move again. Hellas Verona was looking for a replacement for Mattia Zaccagni, who transferred to Lazio, and Caprari joined the Gialloblù on loan.

He would be reunited with Di Francesco briefly for a game before the coach was replaced after a 1-0 defeat to Bologna. Tudor came in and he has ensured that the team continues on with the philosophy of Di Francesco’s predecessor Ivan Jurić.

Tudor has utilized the 3-4-2-1 formation with Caprari as the left attacking midfielder and the 28-year-old has been a great source of flair and creativity. He has developed a great understanding with Giovanni Simeone, in particular setting up the Argentine for two of his four goals in a surprising 4-1 win against Lazio.

Caprari has the ability to score with thunderous volleys and long-range drives, he can dribble past opponents, and he has superb passing vision. The attacking mentality of this Hellas Verona has brought the best out of him so far and he is proving to already be a player of great importance.

Playing with the type of freedom that he probably has not had in different Serie A spells, the Roman is demonstrating what kind of player he can really be. It remains to be seen if Verona buy him outright for Sampdoria, but the early signs have shown that he might have new home in the Veneto region, where he can truly be himself.