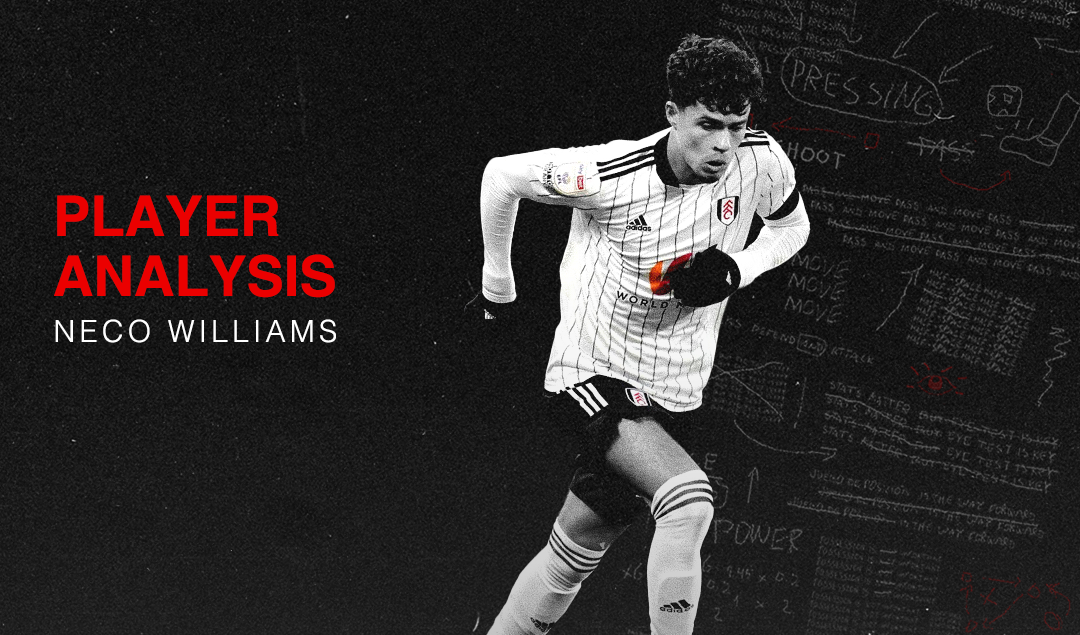 Neco Williams’ recent brace for Fulham has garnered him some well-earned attention again as they beat Swansea City 5-1 on Welsh turf.

It was his second goal in particular that got people talking, when he showcased his top ball striking with a volley from 25 yards following some superb chest control. Even the home fans applauded their fellow Welshman’s screamer.

The strike was no fluke either – the 20-year-old had been due a goal, after being denied by the bar off an outrageous effort from the halfway line against Blackburn at the start of the month.

The right-back is loving his spell in West London where he’s made 4 goal contributions thus far, starting every game since joining the club on loan on deadline day.

The speed at which Neco’s settled and adapted to Marco Silva’s side has likely been helped by Wales teammate Harry Wilson, who he shares the right flank with.

The Wrexham-based duo have formed quite the partnership, providing a breadth of creativity for Aleksandar Mitrovic to feast on. In fact, no player has provided more assists in the Championship than Harry Wilson (13) this season.

Neco made his senior Liverpool debut in 2019 at age 18, having worked his way up through the academy ranks since he was just six years old.

After providing an assist for Divock Origi’s late equaliser in the thrilling 5-5 EFL Cup tie against Arsenal, the Welshman would go on to make sporadic appearances in other cup competitions.

He would have to wait until June 2020 to make his Premier League debut, shortly after the campaign resumed following the COVID-19 outbreak.

At the end of the season, he collected his Premier League winners’ medal and was rewarded with a new long-term contract, penning him down until 2025.

The following month, Neco’s attacking threat earned him his first international call up for Wales, making his debut in a 1-0 victory over Finland in the UEFA Nations League, before scoring a late winner in the following game against Bulgaria.

Williams retained his place in the squad for EURO 2020 where he mainly made substitute appearances but has since solidified a place in the starting XI when Rob Page opts for a back 5.

His dynamism and clean ball striking when shooting or crossing make him an ideal wing-back where he gets to combine further up the pitch like he does for Liverpool and Fulham (in the Championship at least).

With Connor Roberts’ consistent performances locking down the right back/wing-back spot, Williams has filled in on the left side where he seems to find comfort cutting in and combining, almost playing as an inverted midfielder at times.

This season, prior to his loan move to Fulham, Jurgen Klopp would often turn to James Milner or Joe Gomez to cover at right-back in the absence of Trent Alexander-Arnold in the major competitions.

This caused a major knock to his confidence, but Liverpool were going through a rough run and they needed to ensure Champions League qualification and Klopp was reluctant to call upon the kids.

Despite this, there’s no doubt his manager always rated his technical quality – he just needed to become less risky on- and off-the-ball, hence the loan.

An issue halting Neco at Liverpool was his inability to pick his moments as to when to be a high-risk player. The quality was always there but his tendency to constantly try to beat a man and find a teammate in the box was hindering his team at times.

It was easy for him at U23s level, but it goes without saying that the step up in terms of quality and physicality to playing for the first team is a big one.

He was too risky to accommodate at Liverpool at times, explaining why Klopp would often turn to other options at right-back in the absence of Trent Alexander-Arnold.

The reality is Neco is a very talented youngster who fits the bill in terms of the profile Liverpool need to provide nice depth for Trent.

Obviously, he doesn’t offer the same level of threat, but he possesses similarities to his English counterpart in the sense that he’s not a traditional fullback (like Robertson) but he looks to create in the half-space or on the flank from deep by crossing or combining. Realistically there are not many profiles out there like that so Liverpool may be keen to keep hold of the Welshman.

However, if Neco’s loan spell at Fulham is anything to go by he strives to be playing every week and that’s not going to happen at Liverpool.

The Welshman’s impatience at Liverpool is understandable because he’s a good player and has proved he can hold his own for a top Championship side at the very least.

Improvements to the physical aspect of his game are already present and they’ll only get clearer as he grows into his body a little more.

His parent club may look to get around £10-12million for him if he does wish to move on but for the time being, his focus surrounds wrapping up promotion for Fulham and securing World Cup qualification for his nation.