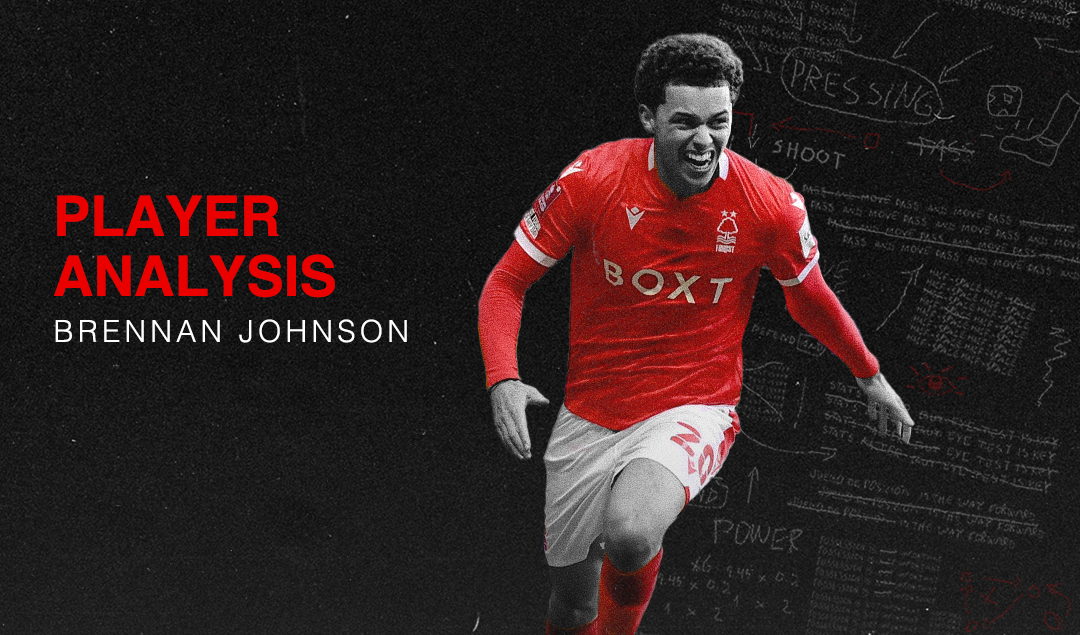 After starring out on loan last season with Lincoln City, quiet anticipation was in the air for what Brennan Johnson could offer this campaign with Nottingham Forest.

With obvious connections to the club – Brennan was born in Nottingham with his father David making 140 or so appearances for Forest – the limelight was firmly on the 20-year-old to succeed, adjusting to the step-up would be the making of the young attacker.

Putting the pressure to one side, Forest’s number 20 has exceeded even the loftiest expectations forwarded his way with consistent brilliance for Steve Cooper’s men.

He has become a game-changer under the former Swansea manager, Cooper using his expertise developed during his time in the England youth set-up to get the best out of Brennan.

Blessed with blistering pace, the 20-year-old is key to the counter-attacking style of play Cooper favours. But, as was apparent in his loan spell in Lincolnshire, Johnson is unafraid to get stuck in to retrieve the ball and hunt down the opposition players for a stray pass.

His recent strike in Forest’s comprehensive drubbing of Leicester in the FA Cup showcases this, alert to a loose back-pass from James Justin to give Forest their second of the contest.

Even in a recent top-of-the-table clash with Blackburn, the 20-year-old showed nerves of steel to step up and end the contest with a last-minute penalty. Nottingham Forest are now daring to dream, Brennan Johnson quickly becoming a clutch player in their ongoing promotion journey.

Going out on loan and learning your trade is a conventional route for various youngsters, Brennan Johnson loaned out to Michael Appleton’s Lincoln City at the start of the 2020-21 campaign after a handful of appearances here or there in the Forest first-team fold the season before.

Lincoln’s style of play would suit Johnson, the likes of Jorge Grant and Anthony Scully tricky attackers for The Imps alongside fellow loanee Morgan Rogers.

This would be the perfect place for Johnson to shine, an opportunity to show off his ability in the men’s game as opposed to just youth football.

Operating on the wing primarily for Appleton’s Imps, he would impose himself onto the men’s game with 13 goals and 14 assists over 48 appearances in Lincoln’s unlikely run to the League One Playoff Final.

Johnson would tirelessly run at League One defenders, becoming a nuisance for defenders in the division. Tom Hopper would often benefit from the youngster’s tenacity, scoring eight goals in 39 appearances usually through moves of Johnson’s making.

With zero goals to his name without the loanee this campaign, it’s clear to see the impact Johnson had in a season at Sincil Bank on those around him.

He would also prove to be a clinical finisher for Lincoln, calmly firing strikes past a whole host of third division keepers.

A strike against Crewe Alexandra sticks out, taking a diagonal ball down comfortably before firing into the roof of the net after a few touches to set himself.

The entire set-up at Lincoln City has suffered in the absence of Brennan Johnson, alongside Jorge Grant moving away permanently with Morgan Rogers also testing himself at Championship level at Bournemouth on loan.

With Johnson in the Imps side, Lincoln managed a League One playoff final – Brennan even scoring in the playoff semi-final, Lincoln beating sleeping giant Sunderland over two legs. The playoff final wasn’t to be, however, no fairy-tale ending to sign off an extremely impressive loan switch.

Michael Appleton constantly tipped Johnson to be a star at the level above, citing the experience of Chris Hughton as a great coach for the youngster to learn from and adapt to the new challenges of the Championship under his stewardship.

Obviously, with hindsight, Chris Hughton’s time at The City Ground was torrid and cut short. Under Steve Cooper, however, Michael Appleton’s high praise of the former Lincoln loanee has come into fruition.

At only 20 years of age still, Johnson has rapidly matured into a crucial component of the new-look Nottingham Forest under Steve Cooper.

With a 56% win percentage so far as Forest boss, the likes of Johnson have become crucial in getting wins over the line and continuing their rapid ascent from relegation candidates under Hughton to the very real possibility of the top flight under the Welsh head coach.

Capped by Wales at senior level off the back of the goal-heavy loan to Lincoln, Steve Cooper might well have taken a shining to Johnson due to his Welsh loyalties. But, in consistent displays under the Welsh head coach, no favouritism is keeping him in the side.

Rather, Johnson is winning games through moments of brilliance and perseverance alongside his equally talented teammates.

All singing off the same hymn sheet, everyone involved at Nottingham Forest is hungry to end their second tier misery and return back to the Premier League again.

In only his second game as Forest’s new head coach, Steve Cooper’s players had already taken to the new approach favoured by the ex-Swansea manager – a desire to remain committed throughout the 90 minutes, feeding off loose passes and bombing forward when the opportunity presents itself.

Already used to this high-octane style at Lincoln, Brennan has become unplayable in such a system at a higher level.

Against Barnsley, Forest turned the game on its head through quick-thinking. After a ball through by Grabban cut the Barnsley defence in half, Johnson put it on a plate for Zinckernagel to slot home.

A few moments later, a quick throw out from Brice Samba found Zinckernagel who then provided Johnson with a strike of his own – drilling a shot past Collins in the Tykes net, making it 2-1 in Forest’s favour before another goal made it 3-1. The victories since then have piled up, even when Brennan Johnson hasn’t been on top form.

Even when he wasn’t reaching the same heights as his goal-heavy loan to League One, Johnson still made his presence felt.

After a difficult run of fixtures left Forest without a win in three matches, a home match with Preston could have seen the wheels come off after such a positive start to life under their new manager. Following a back and forth start to the contest, a cross into the box found Johnson who took a heavy touch.

However, insistent on winning the ball back for his team, Johnson put a foot out for the loose ball with the Preston man fouling him as a result and a penalty was awarded. Lewis Grabban stepped up and scored from the penalty spot, a comfortable 3-0 win the outcome.

Putting to bed any doubts after failing to win in three, Johnson’s bravery to retrieve the ball resulted in the game-defining penalty being given.

A recent purple patch for the youngster has seen him come up on the radar again, scoring four in his last five in the Championship.

Another goal would also come in the FA Cup for Johnson, netting Forest’s second of the afternoon in an emphatic 4-1 win over Brendan Rodgers’ Leicester City.

Knocking out the Cup holders with confidence, Forest are not letting up. Even in their draw with Stoke last time out, adversity in a red card didn’t derail Cooper’s men.

Right at the death, another player who has benefitted from loans earlier in his career scored a pivotal goal – Ryan Yates securing a 2-2 draw to keep the promotion dream alive.

A few points outside the playoff spots at the time of writing, Steve Cooper will be hoping the likes of Brennan Johnson can provide more moments of magic to steer his side into the top six.

With his recent form in front of goal, the Nottingham-born attacker might well be the difference-maker once more in Forest’s remaining 14 Championship matches.