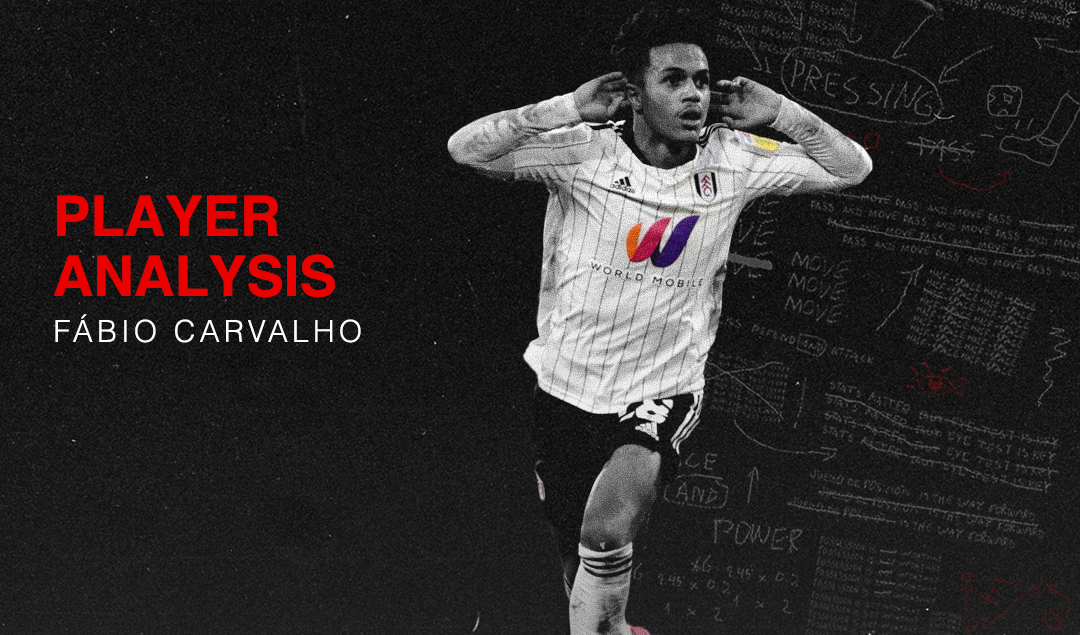 Missing out on a move to Liverpool at the very last minute on transfer deadline day, Fabio Carvalho would have been dejected.

Moving to Liverpool would have been a great move for the young starlet, playing under a manager in Jurgen Klopp who utilises fresh young talent effectively – just see his insistence to start Harvey Elliott after a long-term injury recently.

However, with a gap now between his failed move and the summer for Carvalho to finalise this long-awaited deal, he’ll continue to let his football do the talking for Marco Silva’s high-flying Fulham.

The free-scoring Cottagers are steamrolling everyone in their path, Aleksandar Mitrovic unplayable up top on his own. Yet, with his silky feet and ability to score crucial goals and provide assists, Carvalho is sticking out even with the Serbian breaking all sorts of records.

A goal in Fulham’s recent drubbing of Bristol City sticks out, the strike showcasing a midfielder brimming with confidence who is clearly enjoying the rampant nature of the Cottagers in attack.

Egged on by the Bristol City shirts to continue his run, the opposition standing off him, the 19-year-old dutifully responded and curled an effort past O’Leary into the far corner. The final score would finish 6-2, Carvalho loving the all-out attack style of play.

With Fulham already having one foot in the Premier League at this current point in time, a sizeable points gap leaving them comfortable perched at the top of the Championship, the exciting midfielder might will be a Premier League player next campaign even if he sticks around in West London.

Fabio Carvalho’s journey to becoming one of the hottest prospects in English football started in his native Portugal, signing for the Benfica youth team at just 10 years of age.

A move to London would see Carvalho leave Portugal behind, moving away from the comforts of Benfica to local side Balham near to where he would now live in hustle and bustle of the English capital.

An amateur side playing in the lower depths of the English football structure, the young midfielder swapping the luxuries of Lisbon for a Sunday League level pitch, Balham would prove to be a great place for the Portuguese youngster to show off his skills.

Even in his style of play today, you can see a boy who loves to play with skill as if Craven Cottage is a glorified kickabout down the park.

Balham allowed him to enjoy football, youngsters at that age often feel the pressure of having to give their all in the hopes of making it to the men’s game.

But, when Fulham picked up Carvalho at just 12 years of age, he was confident he could excel for the West London-based club through a sheer love of the game. Turning down interest from the likes of Manchester United whilst playing for Balham, the youngster opted for a club close to home in The Cottagers.

During his Fulham development, clips emerged of the dynamic midfielder dazzling in a number of youth games.

With a lower centre of gravity whenever on the ball, the small midfielder could easily turn past any opposition player trying to keep tabs on him.

Unselfish in his approach play, a bit of skill to go past his opponent was often followed by a simple pass to a teammate to slot home.

Carvalho would even score against Brazil as an England U16 international, deciding to playing for his adopted nation even with his Lisbon origins still intact.

Scott Parker would give the young midfielder his first taste of men’s football, the ex-Fulham boss known for giving youngsters opportunities within his first-team set-up.

Injuries galore at the start of this Championship season saw Parker start a whole host of young talent for his new club Bournemouth, giving the likes of former Arsenal youth product Jaiden Anthony first-team opportunities when others might not.

As much as Scott Parker’s time in the Fulham hot-seat ran out of steam – The Cottagers relegated straight back down to the second tier under his stewardship – he should be praised for allowing Fabio Carvalho to get minutes under his belt in the men’s game.

It was an even bolder move to play him in the Premier League, especially with Fulham teetering on the edge of a relegation straight back down to the Championship.

The Portuguese youngster would excel, however, making four appearances in total and even scoring his first-ever professional goal in a notoriously difficult league.

Even in an end-of-season affair, Fulham losing 3-1 away at Southampton, Carvalho would have come away from the match proud to net his first-ever professional goal in Fulham colours. Impressing in the youth system is one thing, netting in the Premier League is another.

Played in by midfield teammate Bobby Decordova-Reid, the youngster had all the time in the world to cannon a strike off the crossbar and in. A consolation goal in the grand scheme of things, the Fulham youth product turned first-teamer still looked ecstatic with his effort finding the net.

Safe to say, he hasn’t looked back since. He’s been a permanent fixture under the guidance of Marco Silva, a key figure in turning Fulham into a relentless juggernaut this season.

Even after injury issues and COVID ruled him out of the line-up for nearly two months, Marco Silva was sure to reintroduce him straight back to the starting eleven even with tough fixtures against West Brom and Blackburn up next.

Fulham breezed past their tough opponents, a 3-0 win at Craven Cottage followed by a 7-0 thumping at Ewood Park. Fabio Carvalho has had a recent hot streak, four of his five assists this campaign coming in his last few appearances.

His recent assist against Blackpool saw Carvalho operate in a pocket of space he creates on his own, the Fulham winger drawing everyone out to the channel before Carvalho sneakily strides into the empty space.

A routine finish for Mitrovic would come at the end of the move, Fulham’s highly thought of number 28 putting it on a plate for the Serbian to score.

Going way back to the opening few matches of the season, an assist at Millwall might well have got the ball rolling in Jurgen Klopp’s mind at the potential of sealing a deal for the 19-year-old.

The Renaissance of Gaël Kakuta

Accelerating past multiple Millwall shirts, he managed to find an inch perfect pass for Mitrovic to prod home. He would then get in on the act himself, surging through before firing an effort past Bialkowski in the Lions net.

Even with this match taking place in August, this was a sign of things to come for the rest of the season – Fulham taking apart their opponents with ease, Carvalho almost dancing around the pitch in multiple slick passing moves and high-octane counter-attacking passages of play.

With how Jurgen Klopp operates, the attackers always alert to run through and put others into the game unselfishly with Diogo Jota and Mohamed Salah sharing out the goals, the former Balham boy could soon become a Liverpool player.

A number of strikes have also caught people’s attention, a strike against Birmingham saw Carvalho fearlessly run at the Birmingham backline before firing in.

The youngster always looks fearless in whatever he does on the football pitch, an unpredictable entity in the middle for Fulham. With Marco Silva’s Cottagers notching up 79 league goals this campaign, it is very much a team effort down in West London.

But, with Liverpool inevitably coming back for the transfer target they narrowly missed out in January, a lot of vested interest will be on Carvalho as he continues to dazzle for Fulham in their promotion run-in.