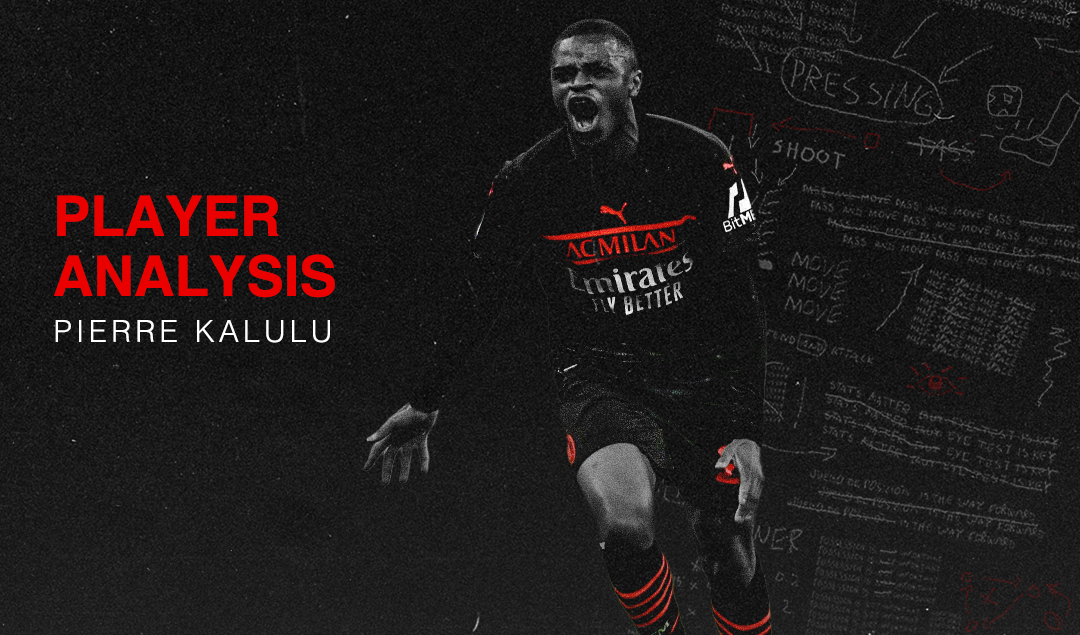 When analysing modern-day defenders, we look ahead more these days, what do they bring to the table? How good are they with the ball? How do they aid their team in playing further up the pitch? Or do they need to “stop wearing gloves in order to give a frightening impression”, as per Zlatan Ibrahimovic?

Along with this, defensive aggression and technical ability have to be on point. 21-year-old Pierre Kalulu is well-rounded and has been Pioli’s go-to man to pair Fikayo Tomori in the 21/22 season, a pairing that sees Milan currently at the top of the table. Kalulu has been the right-sided centre back in a back 4, with Tomori playing on the left.

Kalulu’s primary position previously has not always been as a central defender, he started off as a right-back and transformed more centrally in his days at Lyon, a suited candidate to this role because of his technical abilities.

Speaking on his new role and playstyle to Milan TV, he said “I think I learned how to be a modern defender from a young age. When I was at Lyon, earlier in my career, the coaching style at the whole club was focused on being complete players: technique, speed, playing with the ball at your feet and also reading the game.”

Milan under Pioli have been praised for winning the ball back quickly and building out the back, both areas in which a player like Pierre Kalulu is a suitable profile for the manager.

1v1 defending is where Kalulu shines. He likes to pressurise forwards and defend aggressively, is extremely strong in-ground duels and loves getting stuck into tackles, 2.94 p90 to be precise, which ranks him in the 96th percentile alongside Serie A center-backs this season.

As far as 1v1 defending goes, Pierre tackles 81.8% of dribblers which equates to 0.16 times dribbled past p90, both numbers slightly bettered by Leonardo Bonnuci, ranking Pierre’s stats in the 96th percentile. To out strength or win a tackling duel against Pierre, is a rare sight.

As far as modern football goes, you need players willing to press and recover the ball, which are attributes of Pierre, and he is exemplary at it, 16.27 pressures p90, just below Marten de Roon’s 19.16.

Some of his work may not be visible to stats, whereas would be important to the eye. Being fast is essential to recovering the ball, however, positioning does make this easier.

Kalulu has very good defensive intelligence and awareness for a player who is raw and still being developed. Pierre’s ability to stay focused and position himself well show his matureness as a leader at the back.

To add to all this, Kalulu is yet to make an error leading to a shot or goal all season, which shows how tight his defensive game is.

All players have room for improvement and a common area where Pierre doesn’t excel in his ability in the air. Standing at 5’10, he isn’t the tallest defender in the world which is why Kalulu may have only won 32% of aerial duels contested this season.

The topic that arrives here is “Does this affect his ability to play as a centre back?” So far this season it has not been an issue, he may thank his partners such as Tomori and one of Europe’s most proactive keepers behind him in the name of Mike Maignan.

As Pierre Kalulu used to be an offensive right back, the attacking parts of his game and technical ball-playing abilities bring a lot to Milan.

Pioli has realised this and gives him license to push forward, carry the ball into the final 3rd, and play in the opposition half when sustaining pressure, Kalulu’s abilities are the spine of a modern-day progressive defender.

Kalulu loves driving forward with the ball, Pioli gives him license to do this and the both of them are reaping the rewards. 1.35 carries into the final third-ranking him in the 95th percentile with 3.33 progressive carries p90.

You can expect to see Pierre driving forward with the ball, attributes derived from playing fullback in his previous days. A modern-day defender contributes to creating shots and goals when being allowed to. This is again an area where Kalulu thrives.

He is good with his feet which helps him get away from players and has great vision allowing him to play a forward ball behind opposition lines. He will get further up to the pitch to receive progressive passes, 1.27 p90 to be exact which ranks him in the 97th percentile.

This again shows how intelligent he is for a young player as he takes up good positions off the ball and makes different passing angles and options for his teammates. With a passing accuracy of 90% per game along with carries, we can see how well Pierre fits the mould of a progressive defender good with the ball at his feet.

When attacking, Pierre will drift wide rather than centrally. This way he can utilise former fullback capabilities. By drifting wide he averages more than a cross a game which is unusual for centre backs, however, fits the player Kalulu is, and the way Pioli wants to use him.

His crossing asset will always be useful when you have players like Olivier Giroud and Zlatan Ibrahimovic in the box. Even if it doesn’t result in a header to goal, these types of actions create chances that lead to goals.

Another chart that Kalulu tops is his ability to create shots and goals. He is a very aggressive attacker which is why he is creating an extra 1.43 shots for his team per game! Shots and chances are created by dribbling, shooting, drawing fouls, or passing. In this case, passing directly.

Pierre Kalulu starred in Milan’s previous match, making 5 tackles, 13 recoveries, being the most accurate passer (92%), and winning 5 duels. All while scoring the winning goal from outside the box on his weaker foot, A shot with an xG of 0.3.

His development going forward will be interesting but could this Tomori – Kalulu partnership bring Milan their first Scudetto in 11 years?