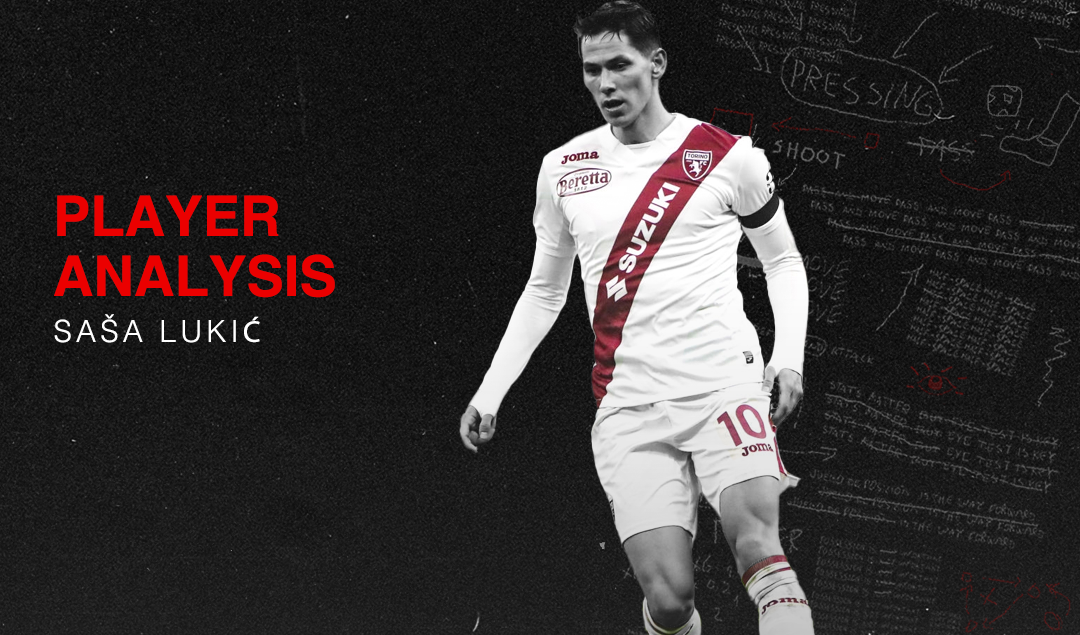 Saša Lukić took some time to find his place at Italian club Torino after leaving his native Serbia in the summer of 2016.

The Granata purchased the central midfielder from Partizan Belgrade for €1.7 million prior to the 2016/17 season, but he struggled to break into the starting line-up, and he was sent on loan to Spanish side Levante for the following campaign.

After a few seasons of coaches trying to discover a role that would bring the best out of his abilities, the 25-year-old has become an important part of the Torino squad under new coach Ivan Jurić, fitting in seamlessly into the Croatian’s 3-4-2-1 formation.

Before he joined Torino, Lukić came through the Partizan youth academy, and he was sent on loan to Teleoptik for a season and a half to gain senior experience in Serbia’s lower divisions.

He returned to Partizan in January 2015, and despite playing two games in the second half of the 2014/15 season, he featured in 31 competitive matches in the following campaign.

Torino hired Serbian tactician Siniša Mihajlović as a replacement for the outgoing Giampiero Ventura for the 2016/17 season and the Torinese club decided to acquire Lukić as one of the reinforcements to the squad.

Mihajlović implemented the 4-3-3 formation with Marco Benassi on the right side of midfield and Daniele Baselli on the left, but he struggled to find someone who can perform consistently in the center. Mirko Valdifiori regularly operated as the deep-lying playmaker but he could not replicate his fine form from the 2014/15 Serie A season with Empoli.

Lukić earned some playing time in his first season with the Granata and he started in the Serie A matches from Weeks 24 to 30 in the 2016/17 campaign. He finished with 14 league appearances, but his temperament was questionable, earning six yellow cards.

The Serbian midfielder was sent on loan to Levante for the 2017/18 season but he only made 16 appearances in La Liga for the side from Valencia. He had to wait until Week 16 of the league campaign to make his first appearance in La Liga and muscular injuries also limited his playing opportunities.

Lukić would play as one of the central midfielders in the 4-4-2 or 4-2-3-1 but he would play on the left of the midfield trio in the 4-3-3 formation under Coach Paco López. Finding a role to settle in was not easy for the Serbian while at Levante, but he still supplied two assists for the Granotas, including one in a 5-4 victory against Barcelona.

After his spell in Spain, Lukić returned to Torino but his compatriot Mihajlović was not longer the coach. He was replaced by Walter Mazzarri in January 2018 and the Italian tactician now had the opportunity to coach for the full season.

Mazzarri often implemented the 3-5-2 formation but Lukić had difficulty getting a look in. Under the former Napoli and Inter coach, the central midfielders of choice were Soualiho Meïté, Baselli, and Tomás Rincón. Although Lukić played 24 times throughout the 2018/19 Serie A season, he only started in 11 of them.

However, the Serbian did score his first two league goals outside of his homeland, with one of them coming in the Derby della Mole against Juventus in Week 35. It seemed that Lukić’s goal in the 18th minute would have earned the Granata bragging rights in Turin but Cristiano Ronaldo equalized six minutes from time to ensure both sides shared the points.

Torino finished seventh at the end of the 2018/19 Serie A campaign, earning the Italian club a place in the qualifying rounds of the Europa League. Lukić featured in four matches but Il Toro were eliminated in the final qualifying round by English Premier League club Wolverhampton Wanderers.

Mazzarri gave Lukić more playing time throughout the 2019/20 campaign and the Serbian was paired in central midfield with Rincón in the 3-4-2-1 formation. However, Mazzarri’s tactics decidedly became more cautious and struggled to bring the desired results.

Torino decided to sack Mazzarri in February 2020 and replaced him with Moreno Longo after the Granata suffered a 7-0 defeat at home to Atalanta and then 4-0 away to Lecce. However, Torino finished a lowly 16th place in Serie A at the end of the season, just two places above the drop. Lukić had played 30 times in Serie A and scored one goal.

For the 2020/21 season, Torino decided to change its football philosophy. After hiring conservative coaches like Mazzarri and Longo, the Granata decided to hire Marco Giampaolo for a more attacking approach.

What Torino Fans Can Expect from Marco Giampaolo

Giampaolo had flopped at his previous job at AC Milan so it was an opportunity for the former Empoli and Sampdoria tactician to get career back on track. He implemented the 4-3-1-2 formation, and he tested Lukić as an attacking midfielder, or the trequartista role as it is known in Italy.

It seems like an inspired choice from Giampaolo. After bringing the Serb off the bench for the first two Serie A matches, Lukić started the next four and he would score three times as well as provide an assist.

Unfortunately, the midfielder was diagnosed with COVID-19 in November 2020, and he was forced to play deeper on return as Giampaolo had changed the formation to the 3-5-2. The Swiss-born tactician was not able to implement his philosophy successfully, and he was replaced in January 2021 by Davide Nicola, a conservative coach.

Nicola steered Il Toro to safety and they finished 17th at the end of the 2020/21 Serie A season. Lukić finished the season with 32 league appearances but all his direct goal involvements came early in the season.

Torino decided to change coaches again before the start of the 2021/22 season and the Granata hired Jurić after two impressive seasons at Hellas Verona. The Gialloblù achieved respectable midtable finishes under the Croatian tactician, who developed players, and built a team around a resolute defense, but could still play a high-pressing game.

Jurić’s balanced approach has been beneficial for his players. They are tough to break down defensively and they are a lethal attacking threat on their day. This approach has allowed Lukić to be involved in both phases of the game.

Lukić has scored one goal and provided three assists so far in 20 Serie A matches so far this season. According to WhoScored, he averages 47.7 passes per game and he has a passing efficiency rate of 88.1 percent.

Under the Croatian tactician, Lukić and Tommaso Pobega protect the defense out of possession. When Torino attack though, the Italian surges forward to make late runs into the box whereas the Serbian midfielder operates more as a director of the play.

The absence of Captain Rolando Mandragora due to a knee injury has also allowed Lukić and the other midfielders to take on extra responsibility.

Lukić has also earned 24 caps and scored once for Serbia. The Serbians have secured qualification for the 2022 World Cup in Qatar and the midfielder has started to feature more for his country under new coach Dragan Stojković.

If he can keep building upon his form at Torino, Lukić should fancy his chances of boarding that plane to Qatar.