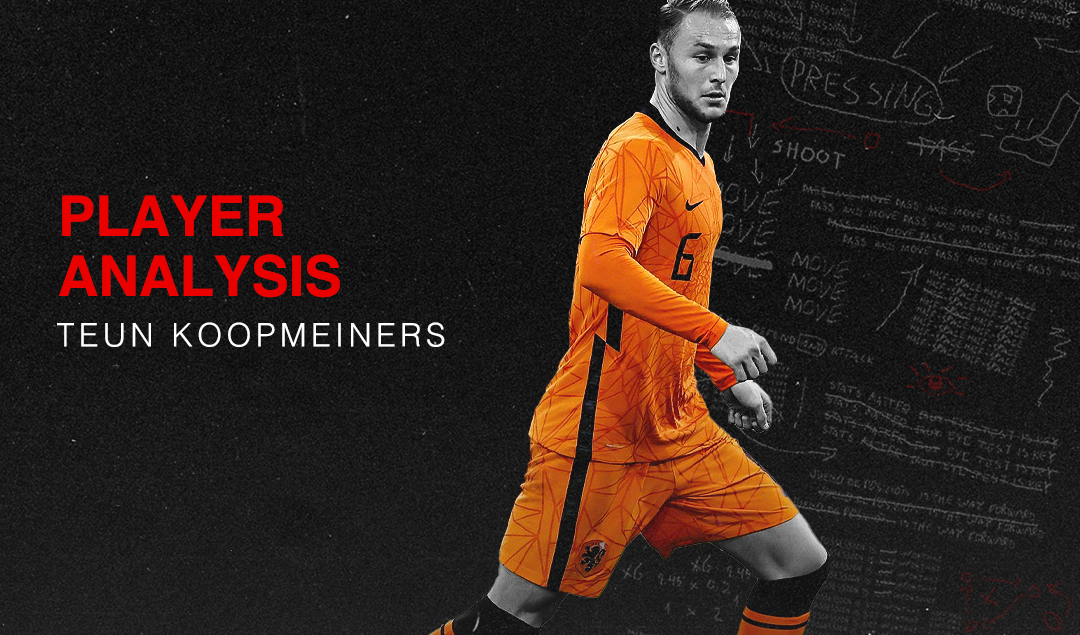 Arne Slot’s AZ Alkmaar grabbed the attention of European football fanatics last season, finishing second in the Eredivisie (tied on points with Ajax), advancing to the Europa League knockout round, and boasting an expansive style of football. The ‘Cheeseheads’ boast a wide range of talents that have ascended from the academy to the first team such as Myron Boadu, Calvin Stengs and Owen Wijndal, as well as their captain Teun Koopmeiners.

Born in the northwestern town of Castricrum on February 28, 1998, Koopmeiners began his career at local club Vitesse ’22 before joining AZ Alkmaar’s academy at the age of 11. He progressed through the ranks of AZ’s youth system and made his first team debut on October 1, 2017, coming on as a substitute in a 4-0 loss to Feyenoord.

It didn’t take long for Koopmeiners to become a starter, playing on the left side of midfield of manager John van den Brom’s 4-3-3, as AZ finished 3rd in the league and lost to Feyenoord in the KNVB Cup Final. He continued his impressive form the following season, this time as the left-sided center back, typically playing alongside Ron Vlaar in the heart of defense. AZ finished 4th in the league and were eliminated in the KNVB Cup semifinals to Willem II.

Today, Koopmeiners is the orchestrator of AZ’s build-up play, playing on the left side of the midfield pivot in Slot’s 4-2-3-1, whilst occasionally deputizing in central defense. Off the ball, AZ typically defend in a 4-4-2, as seen in this example against Napoli where Stengs joins Dani De Wit up top in order to block Fabián Ruiz’s passing angle. 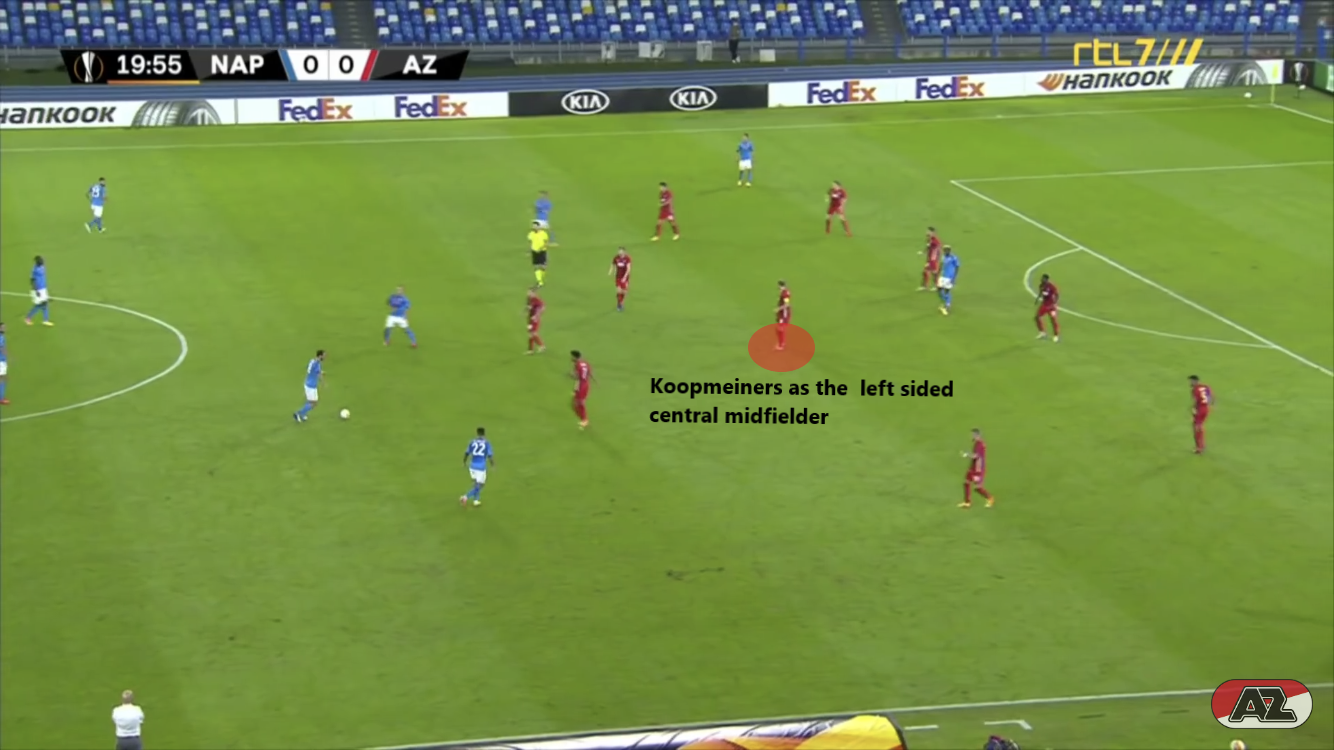 Koopmeiners is an essential cog in AZ’s build-up play, currently completing 7.1 long balls per 90 with a 55% long ball accuracy. The 22-year-old has a sublime ability on the ball and his distribution allows AZ to work their way out of the counter-press, as seen in the below example against Erik Ten Hag’s Ajax.

Marco Bizot passes the goal kick to Koopmeiners at the edge of the box, and before he can be closed down by Dušan Tadić, he launches a long ball over the top, breaking several lines of pressure in the process. The ball soars over Lisandro Martínez and into the path of Oussama Idrissi, who dinks the ball over André Onana for AZ’s second goal.

When he isn’t playing in defense, Koopmeiners typically slots between the center backs or slightly ahead of them during the build-up, allowing AZ to maneuver the opponent’s pressing and progress the ball further forward. The club captain is proficient at breaking the lines with pinpoint long balls, and he’s also capable of dribbling out of pressure and advancing the ball into midfield. 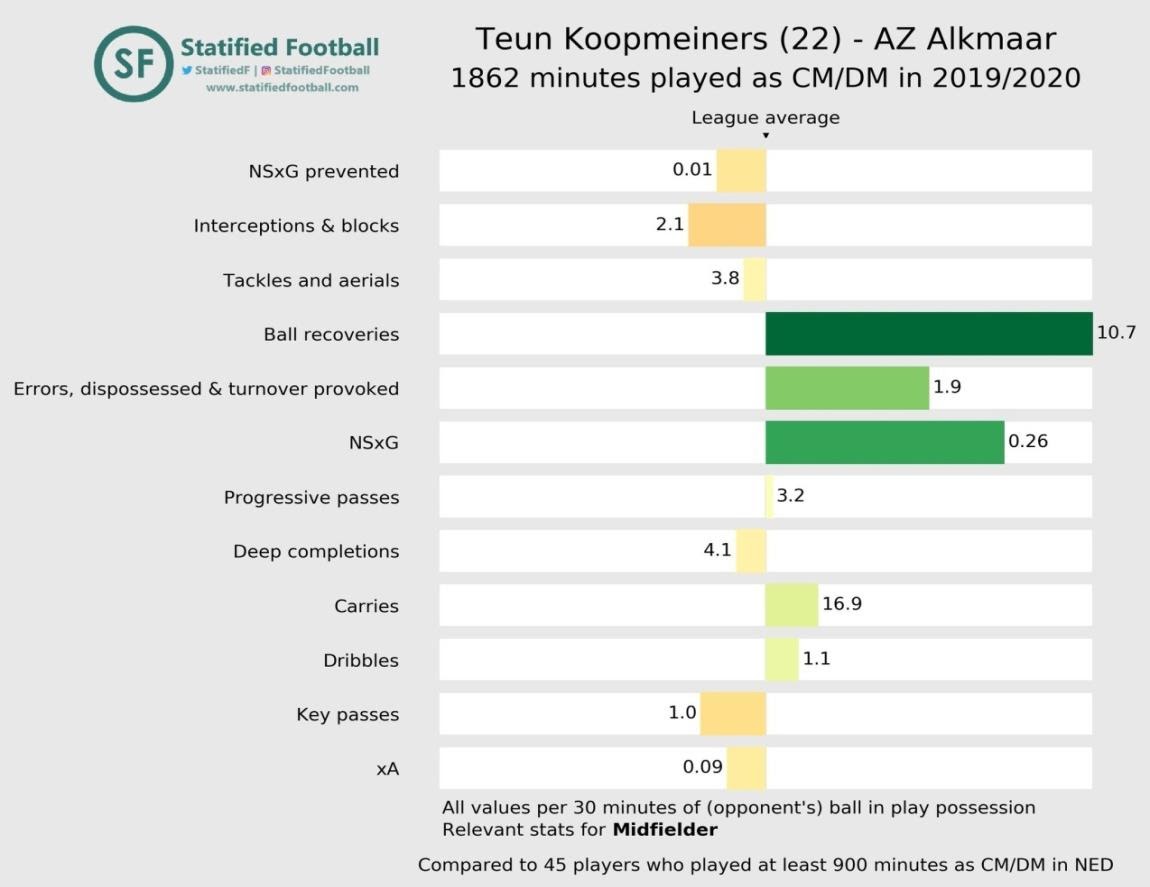 As depicted in the above radar from Statified Football (@StatifiedF), Koopmeiners does particularly well in three metrics: ball recoveries, turnovers provoked and NSxG (Non-shot Expected Goals). NSxG uses xG values for actions which are not shots or goals based on the spot they occur on the pitch and the xG value of that specific shots.

Koopmeiners averages 10.7 ball recoveries per 30 minutes, 1.9 turnovers, and boasts an NSxG of 0.26. These impressive statistics are confirmed in the below radar from StatsBomb (@StatsBomb). The Dutchman had 3.3 PAadj tackles and interceptions per 90 last season, whilst also providing a 0.73 xGBuildup value, proving just how vital he is to AZ’s build-up play. 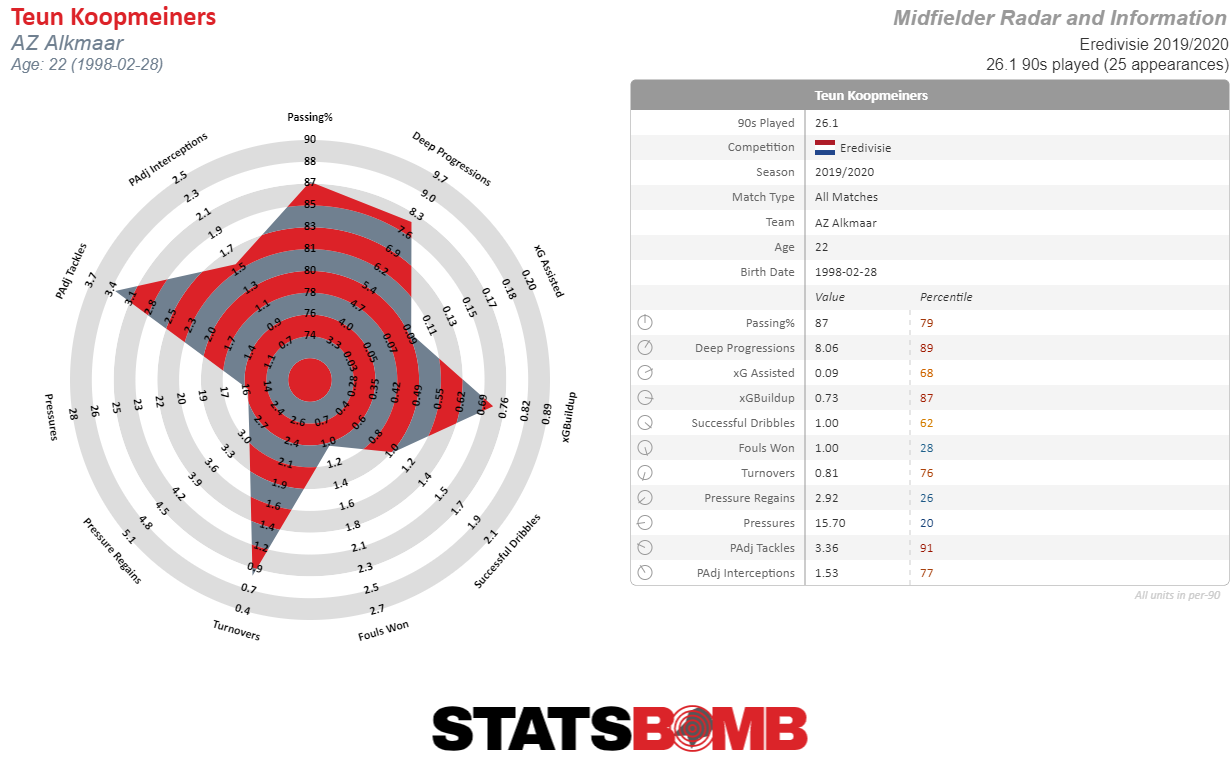 Koopmeiners completed 8.06 deep progressions per 90 in contrast to Toni Kroos’s average of 6.27 deep progressions for Los Blancos last season. As shown in the below graphic by Ninad Barbadikar (@NinadB_06), he also ranked well ahead of his competitors within his age range in the Eredivisie and the Premier League with 23.5 forward passes per 90. 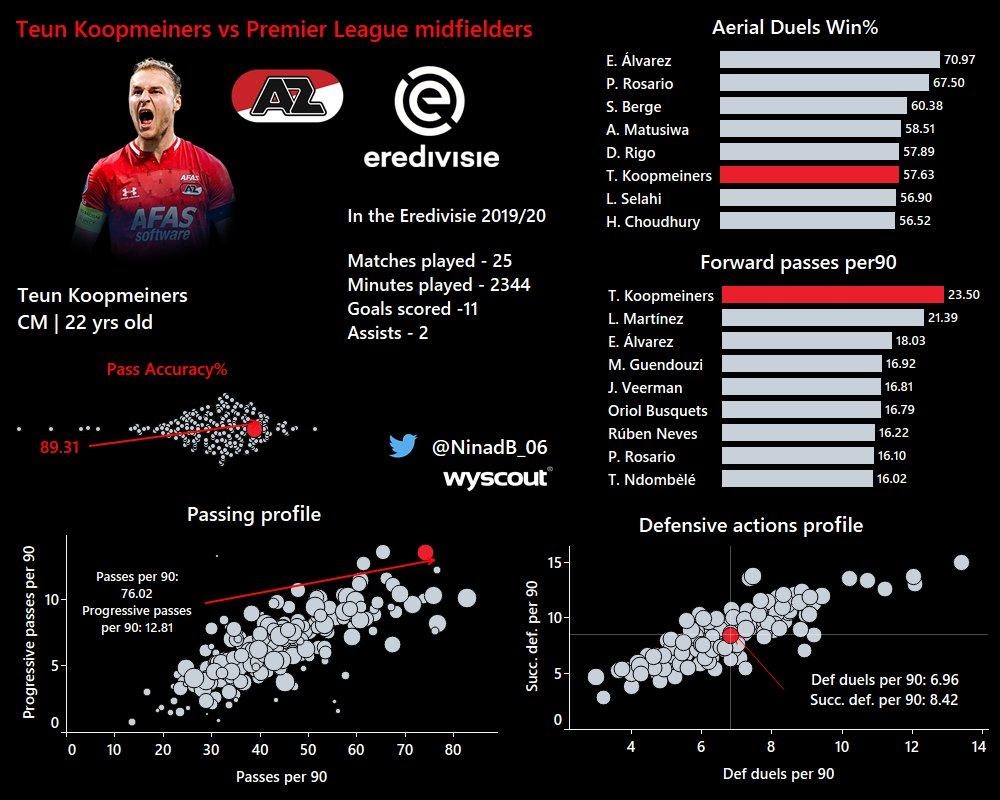 The 22-year-old midfielder is also a major threat on penalties and set-pieces, having scored 16 goals (11 in the Eredivisie) during the 2019/20 season and 9 goals in the 2018/19 season. The AZ man is clinical from the spot with a conversion rate of 95%. He can also find the back of the net from behind the box, as seen in this free kick against ADO Den Haag.

Koopmeiners attracted interest from Leeds United, West Ham and Everton in the summer, but he ended up remaining in Holland, and one possible reason for this could be his lack of mobility off the ball. His lack of top-end speed can land him in awkward scenarios when battling against fast attackers, but he makes up for it due to his ability to shuttle across the pitch and intercept passes.

In this example, Royal Antwerp captain Faris Haroun collects the ball from Abdoulaye Seck and plays a through ball over the AZ defense and into space. Martin Hongla beats Koopmeiners for pace and chips a lovely pass to Didier Lamkel Zé, and the Cameroonian forward heads the ball past Bizot and into the back of the net.

AZ equalized in the 90th minute via a superbly taken shot from Stengs, forcing extra time. The Dutch side would go on to win at the King Baudouin Stadium via extra time goals from Ferdy Druijf, Koopmeiners and Albert Guðmundsson, and progressed to the UEFA Europa League group stage.

Marjin Beuker, AZ Alkmaar’s Head of Performance, recently claimed, “Our football philosophy exists out of dominant dynamic play, with lots of variation, so that we determine what happens next and the opponent doesn’t know our next move. We want possession of the ball, hence we play with aggressive pressing with a well-organised team. We want all of our actions to be delivered with the highest intensity.”

There’s no player who embodies this philosophy better than club captain Teun Koopmeiners. He has the versatility to play multiple positions from holding midfielder to central defender, and at 22 years of age, he has an intelligence and maturity well beyond his years. With Nemanja Matić turning 33 next summer, Manchester United would be wise to consider him as an answer to their holding midfielder position.

After Vincent Janssen, Guus Til, Alireza Jahanbakhsh and Wout Weghorst, Koopmeiners could be the next player from AZ Alkmaar to earn a big-money move, and after making his Netherlands debut in a friendly against Mexico on October 7, he’ll be looking to displace Marten de Roon from his starting spot in the national team.