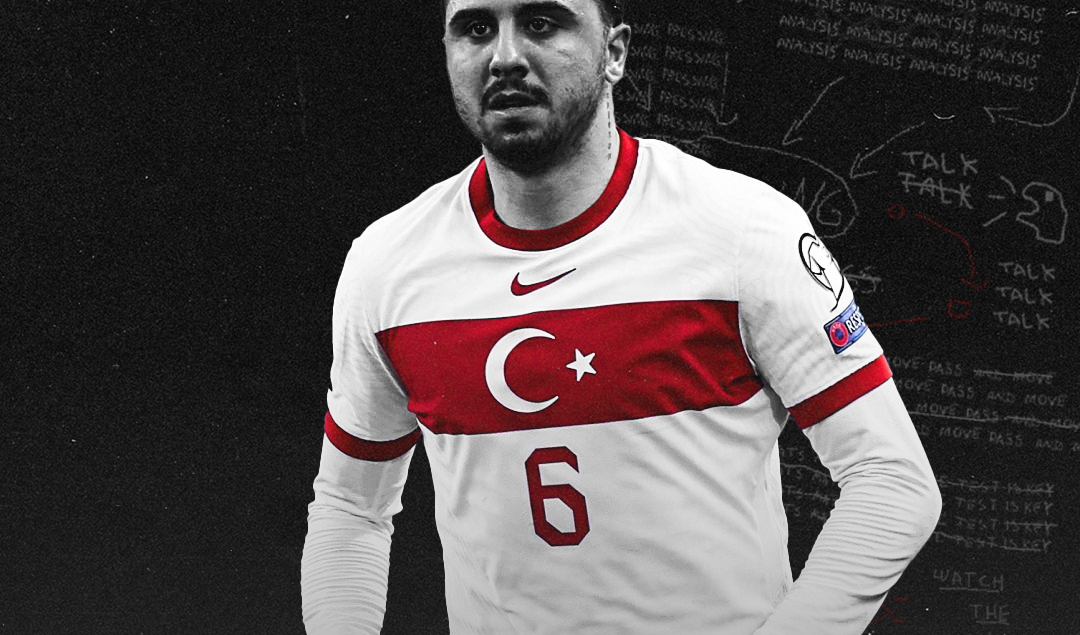 Turkey began their 2016 UEFA European Football Championship in Paris, narrowly losing to Croatia after Luka Modrić scored a firecracker of a volley from outside the box to give the Vatreni a lead before halftime. The following match, they found themselves dominated and defeated by the reigning European champions, with a goal from Nolito sandwiched between a brace from Álvaro Morata giving Spain a 3-0 victory in Nice and mathematically eliminating Turkey from the competition.

As such, their final group stage match against the Czech Republic in the Stade Bollaert-Delelis was effectively a dead rubber. Burak Yılmaz opened the scoring early on, converting a cross from 18-year-old winger Emre Mor, and after a string of impressive stops from goalkeeper Volkan Babacan and wasted chances from the Czech forwards, Turkey scored their second ad final goal in the 65th minute, with Ozan Tufan taking advantage of a loose ball scrap from a Selçuk İnan free-kick and smashing the goal past Petr Čech.

Five years after their hapless campaign in France, Turkey look set to be one of the tournament’s dark horses in Euro 2020. Since the appointment of Şenol Güneş in 2019, the Crescent-Stars have finished second in their qualifying group with 23 points from 10 matches — just two points behind world champions France — whilst they have begun their World Cup qualifying with a bang with victories over the Netherlands and Norway.

Led by a treasure trove of fresh-faced, promising young stars such as Çağlar Söyüncü and Yusuf Yazıcı, Turkey could be a force to be reckoned with for their Group A opponents: Italy, Switzerland, and Wales. Indeed, from their 2016 squad, only four players were included in Güneş’ latest squad for the 2022 FIFA World Cup qualifiers: Caner Erkin, Hakan Çalhanoğlu, Ozan Tufan, and Burak Yılmaz.

Çalhanoğlu has reached a new lease on life as the trequartista in Stefano Pioli’s 4-2-3-1 at Milan, whilst Yılmaz continues to go strong at nearly 36 years of age with an astonishing 11 goals and 4 assists in 25 appearances for Lille this season. Erkin, on the other hand, has been a vital cog in Fenerbahçe’s title challenge since returning to the Yellow Canaries last summer, providing 8 assists from the left-back position.

The only player from that bunch who has not yet played in one of Europe’s top five leagues is Tufan. However, at 26 years of age, his performances in midfield for club and country are already drawing attention from the likes of Liverpool, Everton, West Brom, Norwich City and Leicester City, having provided 5 goals and 6 assists this season as well as a smart finish to break the deadlock in Turkey’s 3-0 victory over Norway on March 27.

Born in Orhaneli, Turkey, Tufan joined Bursaspor in 2005, honing his skills at the famed academy that has helped produce the likes of Zeki Çelik, Ali Akman, Enes Ünal, Burak Kapacak, and current Fener teammates Serdar Aziz and Altay Bayındır. After rising up the youth ranks for club and country, Tufan made his professional debut on August 9, 2012, coming on as a substitute and scoring a goal in a 6-0 drubbing of Finnish side Kuopion Palloseura in a UEFA Europa League qualifier.

Tufan gradually bided his time on the edge of the starting line-up, impressing in a wide range of positions from right-back, left-back, and right-midfielder and earning a maiden call-up to the Turkish senior team, where he would make his debut on May 25, 2014, in a 2-1 victory against the Republic of Ireland in Dublin. Three months later, Tufan came off the bench and scoring a long-range shot in the 90th minute to lead Turkey to victory in a friendly match against Denmark.

“I had the ball in front of me and right when I was about to kick it, I heard Arda Turan backing me to shoot,” said Tufan after the match. “I initially had the scare of hitting my shot off-range, on such an important moment; but I kept my composure and hit the ball right after. I want to thank [manager] Fatih Terim for giving me this chance, I think I’ve done the best I could today.”

He quickly solidified a starting spot for Bursaspor under manager Şenol Güneş, excelling in midfield while occasionally deputizing in the back four and earning a reputation as one of Turkey’s most exciting talents with 3 goals and 9 assists in 46 appearances. His performances peaked the attention of Fenerbahçe, who paid €7 million for the then 20-year-old.

Whilst Tufan was unable to cement a starting spot under Vítor Pereira, he became a valuable asset both as a starter and as an impact sub, shining in a variety of midfield roles as Fenerbahçe came within inches of the league title only to fall short to Beşiktaş, whilst they were eliminated by Braga in the UEFA Europa League Round of 16 and lost to Galatasaray in the Turkish Cup Final following an early goal from Lukas Podolski in Antalya.

Tufan started in all three of Turkey’s matches in their unsuccessful Euros campaign, and while he would struggle with injuries during the 2016/17 campaign, he managed to improve his numbers in front of goal with 5 goals and 3 assists. Unfortunately for him, the season ended on a sour note, as Istanbul police detained and questioned him in a probe into the illegal smuggling of luxury cars into Turkey.

Nevertheless, foreign teams continued to register an interest in the player, with Tufan being left on the bench in the club’s opening two league matches due to a potential move to the likes of Benfica, Valencia, Sporting and Braga. Tufan, on the other hand, remained in Istanbul and impressed under new manager Aykut Kocaman with 3 goals and 2 assists in his first nine starts, before losing his starting spot after a 1-1 draw with soon-to-be-relegated Osmanlıspor that saw Fener concede a last-minute equalizer to Nigerian forward Aminu Umar.

With Mehmet Topal now patrolling the center of the pitch alongside Josef de Souza, Fenerbahçe mounted an impressive run of form: five wins, one draw, 12 goals scored, 4 goals conceded. Then, in the middle of the Christmas break, Kocaman publicly froze out Tufan from his plans after a meeting gone sour:

“You are not a serious man. You do not pay attention to your actions, neither during the training sessions, nor in your life outside. You cannot meet this with maturity even when you remain in reserve, you leave yourself. Look at Mehmet Topal, Şener [Özbayraklı] and Volkan [Demiral]… They also remained backup, but none of them did like you.”

Tufan was suspended from the team as Kocaman made it clear he believed that his player needed to straight out his priorities, whilst president Ali Koç contemplated selling the then 22-year-old midfielder due to his hot-headed attitude. A move to Selhurst Park looked set for completion until Crystal Palace striker Bakary Sako suffered an ankle fracture in a 1-1 draw at West Ham, robbing Roy Hodgson of one of his top goalscorers and forcing them to focus their meager budget on finding a new striker. As Alexander Sørloth joined Palace for a fee of £9 million, Tufan headed back home from the airport dejected and deprived of a new beginning.

Alexander Sørloth: King of the North

He would depart on loan the following January to fellow Süper Lig side Alanyaspor and quickly nailed down a starting spot in midfield, and his excellent form saw him return to the Turkish national team at the end of the season. Manager Ersun Yanal followed Güneş’ lead and opted to give Tufan another chance in the first team, and he quickly repaid his trust by scoring the equalizer in a 3-5 loss to Real Madrid, beating Keylor Navas with a rocket of a shot from outside the box. While Los Blancos would go on to win the Audi Cup third-place match after goals from Nacho Fernández and Mariano Díaz, Tufan had caught his manager’s attention in Munich.

Safely back in his manager’s plans, Tufan became a reliable jack-of-all-trades in the 2019/20 season, impressing in a variety of positions across midfield and defense and even wearing the captain’s armband on several occasions including a 3-1 victory against Beşiktaş, in which Tufan received a loose ball by the midfield line, drove forward and launched a rocket of a shot past Loris Karius in goal. He would go on to record 6 goals in 6 assists in all competitions, a figure he is already close to surpassing this season (5 goals and 6 assists).

Whilst his first few years at the Turkish giant were marked with controversy and more headlines from his actions off the pitch and off it, Tufan has finally emerged as a mature and diligent leader in midfield for club and country at 26 years of age. He is a box-to-box midfielder who is equally capable of defending a 2v1 counterattacking situation as he is scoring an 89th-minute equalizer, a player who covers every blade of grass and who, despite not being the quickest, imposes himself physically on both his team’s box as well as the opposition’s.

Although Tufan has mainly played in a box-to-box midfield role over the past two seasons, he has also proven to be an effective force in the final third whilst playing in an attacking midfield role. He is able to find the spaces in attack, break the lines, win back the ball, aid in the first phase of build-up, and engineer an attacking opportunity for his team.

In the Turkish national team, he plays slightly further forward than Okay Yokuşlu whilst also allowing the likes of Hakan Çalhanoğlu and Kenan Karaman to enjoy more creative freedom, a similar role to that which he performs at Fenerbahçe with Luiz Gustavo. He is best utilized when he is a more defensive-minded player next to him in midfield, although he never forgets to lend a helping hand in his defensive labors.

It has been a turbulent spell at the capital, with Fenerbahçe going through four different managers over the past year, and yet, the Yellow Canaries are chasing their first league title since 2014 thanks to Tufan. With nine league matches left to play, they currently sit two points behind league leaders Beşiktaş, who have a game in hand, whilst bitter rivals Galatasaray sit one point behind in third place with 61 points.

While they came close to falling out of the title race on March 21 after Domagoj Vida opened the scoring for Beşiktaş, they were saved in the 89th minute as Tufan picked up a low cross from Caner Erkin on the edge of the box and launched a missile of a shot past Ersin Destanoğlu and into the top-right corner. Tufan will be looking to carry over his excellent performances into this summer’s Euros, and a breakthrough tournament could see him following in the footsteps of teammates Okay Yokuşlu and Çağlar Söyüncü and earn a move to the Premier League.