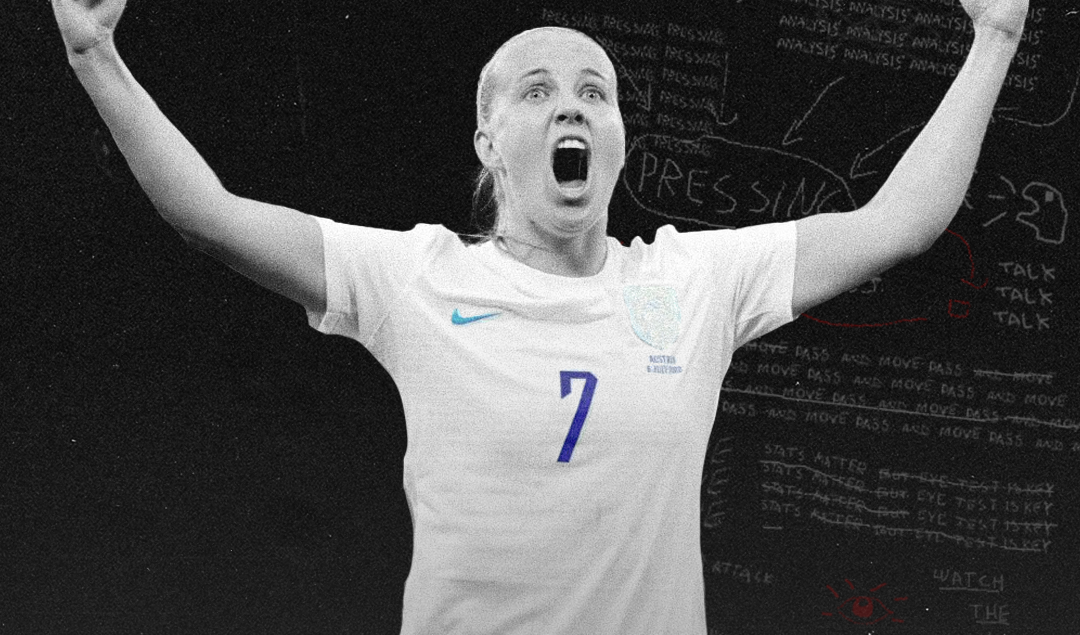 It is decided. England will face Germany in the final of Women’s Euro 2022, played before a capacity crowd at the iconic Wembley Stadium.

It has already been a tournament to remember, but Sunday’s curtain call promises to be special. Supported by an energetic home crowd, the Lionesses will take to the field chasing their first major title. After falling at the final hurdle twice before (1984, 2009), is this the year that football finally returns ‘home’?

On the continent, an expectant nation hopes the answer is ‘no’. Germany, eight-time European champions, defeated the Lionesses 6-2 in the final of Euro 2009 and are desperate to end their six-year silverware drought. But will Sunday’s contest see history repeat itself or be rewritten?

Sarina Wiegman’s side advanced to the knockout phase with a perfect record in Group A: three wins, 14 scored, zero conceded. They squeaked to an opening night victory over Austria, before hammering Norway and Northern Ireland to reassert their status as one of the favourites.

In what was supposed to be a close encounter, England humiliated Norway with a paradigm-shifting, 8-0 win. De Gresshoppene were expected to provide a stern test. They did not; the Amex Stadium provided the backdrop for a mauling.

However, the situation could not be more different on the Lionesses’ next visit to Brighton. They needed extra time to overcome Spain in the quarter-finals and were just six minutes away from elimination when Ella Toone’s equaliser arrived. By the time Georgia Stanway had netted the winner, the roof had been lifted and Sweet Caroline was being blasted into the night sky.

England saw off the threat of Sweden in the final four with a dominant 4-0 win, backed by a noisy Bramall Lane crowd. However, the Lionesses could have easily been on the losing side if not for a marvellous goalkeeping performance from Mary Earps.

Born in The Hague, Wiegman was appointed England boss last year. The 52-year-old, twice crowned FIFA Women’s Coach of the Year, won Euro 2017 with the Netherlands and has thrice lifted the KNVB as a head coach.

The Lionesses are 17-2-0 (W-D-L) under the Dutchwoman and approach the final of Euro 2022 with a settled line-up. Wiegman has stuck with an unchanged 4-2-3-1 throughout the tournament, using impact players Alessia Russo and Ella Toone from the bench.

Arsenal’s Beth Mead is one of the main beneficiaries of Wiegman’s tactical approach. With the Lionesses coached to exploit the wide areas, the 27-year-old is always involved when her team has the ball, accumulating six goals and five assists in five matches as a result.

Despite scoring a hattrick, Mead’s crossing ability stood out against Norway. She tormented Julie Blakstad at the Amex, as demonstrated with her first-half delivery to Ellen White.

Mead, then, is a total threat, capable of scoring and assisting in bucketloads. Germany must keep her under lock and key in the final.

England’s main source of vulnerability is deep crosses into the penalty area, whether from open play or set-piece scenarios. Despite backstopping England to the final with a run of commendable performances, Earps is not a confident cross claimer, as demonstrated versus Spain and Sweden:

However, there is a crumb of comfort for the Lionesses. They are very effective at preventing crosses from entering the box, with full-backs Lucy Bronze and Rachel Daly defending aggressively down the flanks.

Also of note: Earps is not completely cross-shy. She frequently wins aerial duels in her six-yard box and, when push comes to shove, is not afraid of putting herself in vulnerable situations. Even so, crossing remains her main weakness.

Martina Voss-Tecklenburg’s side are also unbeaten at Euro 2022, advancing from Group B with three wins, nine goals, and zero conceded. Like England, their backline has only been breached once at this tournament.

Germany’s most important match of the group phase came against Germany, who they defeated 2-0 despite being limited to a meagre 30 percent share of possession. They cruised to victory in their other round-robin matches, easing past Finland and 10-player Denmark to set up a quarter-final date with Austria.

Brentford’s Community Stadium provided the backdrop for Germany’s win in the last eight, although they were hardly convincing. Irene Fuhrmann’s side kept pace with the eventual finalists for most of the match but were twice undone by unconvincing goalkeeper distribution.

Despite being held to a tight, 2-1 scoreline, Germany’s performance in their semi-final versus France was much more impressive. Alexandra Popp was the difference-maker, twice scoring from crosses to send her nation to the final.

Voss-Tecklenburg has been on a journey since taking charge of the national team in 2018. She oversaw Germany’s quarter-final exit at the 2019 World Cup and has since retooled her squad around promising youngsters, including 20-year-old defensive midfielder Lena Oberdorf.

The Germans are most comfortable in a 4-3-3, with high-pressing and playing out of defence key features of their approach.

Despite being a five-time Frauen-Bundesliga champion and two-time German Female Footballer of Year, Popp was not a sure bet to feature, not least star, at Euro 2022.  Just three weeks ago, there were question marks over the Wolfsburg forward’s fitness. She underwent surgery on her meniscus for the second time in as many years in January and caught Covid-19 in January.

However, there have been no signs of fatigue in Popp’s performances. The 31-year-old has six goals in five appearances at the European Championship and was crucial to Germany’s semi-final win over France:

Popp’s first strike of the night (above) set the tone for the match, with her relentlessness in the penalty area proving the difference on both goals.

Just three years after becoming the youngest German to participate in a World Cup, Oberdorf is the backbone of her nation’s midfield. Operating as a single-pivot, the Wolfsburg ball-winner oozes confidence and has emerged as a leader for club and country.

Oberdorf is a snippy midfielder, unafraid of throwing her weight around in tense moments. However, her aggressiveness can sometimes bubble over, as demonstrated by her late yellow card versus France and 1.72 fouls per 90 last season:

In the heat of battle, the 20-year-old must retain her composure. She will be one of the most important players on the pitch if she does.

It all comes down to this. Wembley will set the stage for a crunch meeting between England and Germany with the weight of expectation and history on the line for both sides.

For the Lionesses to come out on top, they must continue to defend aggressively in wide areas. Bronze and Daly, despite being left to their devices by Lauren Hemp and Mead, have prevented most of the crosses England have faced from entering the penalty area and will be keen to extend that trend against Germany.

Fran Kirby also has a key role to play in the final. Her individual battle with Oberdorf could shape the contest if she can draw the 20-year-old into early fouls.

Germany, meanwhile, will focus on exploiting their rival’s weaknesses. Popp’s potency as a poacher will be a factor, especially if she receives satisfactory service. Will it be the English or Germans who assert their dominance? Find out at 17:00 (BST) on Sunday.