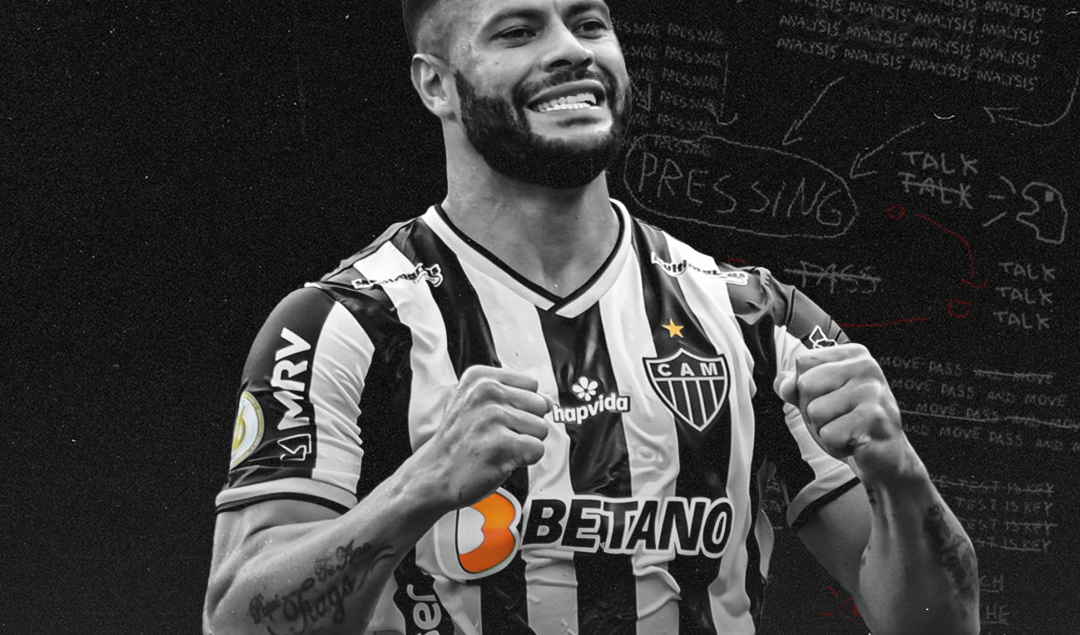 There were jubilant celebrations on the streets of Belo Horizonte last week, as Atlético Mineiro ended their 50-year wait for a league title with a dramatic 3-2 victory over Bahia, clinching the title with two games to spare. While Mineiro seemed destined to win the league for many weeks, after half a century of near misses, their fans were taking nothing for granted until they had mathematically secured the title.

Not since the days of Pelé had Atlético been crowned as Brasileiro Champions – the inaugural competition in 1971 was the last time they lifted the title and have had to sit back and watch 14 other sides achieve what generations of Galos could only ever dream of.

Having said that, they have still had plenty to celebrate in the ensuing half a century. In 2013, they were crowned Copa Libertadores Champions with a team containing the likes of Ronaldinho, Jô, Bernard, Diego Tardelli and Gilberto Silva, before winning their first Copa do Brasil the year after.

In 1982, the likes of Luizinho, Toninho Cerezo and current assistant boss Éder were part of ‘the best team ever’ at Espańa ‘82 – an era which saw the club generally compete at the top end of the division – while they have suffered relegation only once. But 2021 will forever be remembered as the year the club’s ‘jinx’ came to an end – the year they became immortal.

It was masterminded by Alexi Stival (affectionately known as ‘Cuca’), who returned to the club in March following the departure of Jorge Sampaoli to Marseille. It wasn’t the first time he’d returned to one of his old Brazilian stomping grounds – during a bizarre 22-year managerial career, the 58-year-old has taken the reins at 21 different Brazilian clubs and spent multiple stints at eight of those.

Cuca has spent time all over Brazil; from the hubbub of the Copacabana shoreline, to the busy streets of São Paulo and the relevant quiet of Pelotas in the south, but the Mineirão is where he has enjoyed the most success.

After initially joining the club in August 2011, he steered the side to Série A survival before taking them to the dizzy heights of 2nd the year after – their then highest standing of the 21st Century, and a return to the Copa Libertadores.

Cuca’s star-studded side then conquered all before them, defeating the likes of São Paulo, Newell’s Old Boys and Olimpia as they achieved the Liberator Dream and lifted their first major trophy since 1997.

He did so by balancing possession football with attacking impetus, using the full-backs to drive the team forward and unleash the copious amounts of attacking potential at the sharp end of the pitch – all while keeping it tighter than anybody else at the back, scoring the second-most goals in the division to boot.

A side with quality, grit and determination, they came from behind to win more games than anybody else, too, including the game which eventually realised their wildest dreams.

His squad this year wasn’t quite as flashy as his Libertadores heroes, but still included plenty of familiar faces who grew big reputations both at home and abroad. Undoubtedly theirs – and the league’s – star player has been Hulk, as the former Porto and Zenit forward rolled back the years in 2021 to smash home 19 goals – including seven in his last five – from 35 games.

While Sampaoli lost out on the title last year due to the lack of a real focal point, there has been no such trouble for Cuca. Not only has Hulk earned the adulation of the Galos and league hierarchy, but he has caught the eye of Brazil boss Tite – earning his first cap for the Seleção since 2016 in the October internationals.

During the league season, he netted against the likes of Palmeiras, Fluminese and Forteleza, as well as bagging a heroic comeback brace against Corinthians along the way, consisting of a rasping free-kick and a dramatic late winner – far and away the top scorer in the league.

A further seven goals in the Copa Libertadores took Galo to the semi-finals where they were knocked by eventual champions Palmeiras, while his six goals from eight in the Cup sees him top those scoring charts as they prepare for the final next week.

He has, however, spent most of the season playing as a striker, rather than the more familiar right wing position where he originally earned his name. Much like his gaffer, Hulk too has chosen a path perhaps never trodden before – he left his homeland in 2004 to join Japanese outfit Kawasaki Frontale, before traversing the nation with Consadole Sapporo and Tokyo Verdy in the years to come.

Hulk hit 45 in 56 for the latter to elevate himself to the global stage – signing for FC Porto in 2008 where he truly began to shine. Many will say he should have played his football in one of Europe’s bigger leagues, but instead, Hulk sought big-money moves to Russia and China which propelled him from European applause to the wilderness of the west.

The Brazilian has always put up big numbers, though, and consistently earned caps for his national side into his 30s – winning the top division with both Zenit and Shanghai SIPG all the while. Perennially maligned during a career which maybe should have amounted to ‘more’, but Hulk returned home to become the division’s top scorer and starman during his final swan song – simply Incredible.

Inter’s 2009 Summer Mercato: The Construction of a Treble Champion

One of his partners in crime has been Diego Costa – a legendary Premier League striker from the 2010s who grew a reputation as a powerful and ruthless centre forward. Originally moulded by the teachings of Diego Simeone at Atlético Madrid, Costa became the archetypal Atléti hero – sandwiching two Premier League titles with Chelsea in between his time in Spain.

His second stint in Madrid wasn’t quite as memorable as his first, though, and at the age of 32 Costa returned to his place of birth to sign for a different Atlético in August of this year.

After over eight months out of the game and with age catching up with him, Costa hasn’t fired the goals in at the rate he did for Atléti and Chelsea, but a steady stream of four goals from 15 games (just nine starts) means he has proved a valuable asset for Cuca’s side.

He opened his account with a late equaliser against Red Bull Bragantino with a fine first-time volley, before setting the team on their way to wins against Sport Recife and Corinthians in the coming weeks. As Jon Champion once said of Thierry Henry, he may be cast in bronze, but he is still capable of producing truly golden moments.

Costa helped end Los Rojiblancos’ 17-year wait for La Liga, before starring as Chelsea ended five years of drought in 2015 – capping off a decade of dominance with being a member of this historic Mineiro side. Simply vintage.

But amongst all the fanfare, praise must be shared for this heroic team effort. Keno, a Brazilian journeyman winger, notched the other two goals against Bahia in a frantic four-minute spell to turn zero points into three and secure the title.

Oscar: The Brazilian Superstar Who Swapped Chelsea for China

Matías Zaracho has brought the archetypal balance of Argentinian flair, dynamism and grit, scoring 13 goals along the way including a gravity-defying bicycle kick against River Plate – a man surely destined for a spell at the top.

He is reportedly their joint-record signing alongside fellow Argentine Nacho Fernández – another Mr. Reliable midfielder who plugged away with ten goal involvements from 26 games, the sort of player any team needs to win a title – especially when you play 60+ games a season.

Guilherme Arana has been one of the country’s stand-out defenders at left-back, becoming a vital part of the sturdiest defence in the league. While you may hear plenty of Hulk and Costa, the whole is always greater than the sum of its parts.

Elsewhere amongst the squad you’ll find former Inter and Roma full-back Dodô, fellow Brazilian Allan who finally escaped the shackles of Liverpool to become the defensive lynchpin of the side following six loans away from Anfield.

QPR and Napoli alumni Eduardo Vargas has played his part with ten goals – including the pivotal goal against Bahia that sent Mineiro to the Copa do Brasil quarter-final – while one-time Sevilla flying machine Mariano has played nearly 50 games at the age of 35.

Everywhere you look it’s a who’s who of recognisable names and familiar faces, all beautifully cobbled together to create the best side in Brazil – overseen by football management’s greatest journeyman. Galo will now prepare for one final test: the Copa do Brasil final against Athletico Paranaense, a game they travel to as heavy favourites against a side who finished 14th in the division.

How Jackson Martinez Stole the Show on His Way To Porto, Then Fell Apart at Atlético

Victory would make Cuca’s men just the second Brazilian side to win the domestic treble, following their exploits in the state championship earlier in the year. The main questions now stand as: can they do it again, and how sustainable is their spending?

The worry for the latter comes from bitter rivals Cruzeiro (ironically currently the only club to lift the domestic treble), a side who turned from league and cup winners to Série B dwellers, shackled in a malaise of mismanagement and now destined to spend another season in the second tier – just eight years after being crowned as champions.

Hulk, Costa, Zaracho and others bring plenty to the club, but most pertinently, big fees, wages or both. They have to keep success rolling if they want to sustain this level of spending. That brings us back to the first question: can they do it again?

Galo are a mix of youth and experience, for every superstar who is on the brink of retirement, there’s somebody in their early twenties just clicking into gear. Flamengo and Palmeiras – the two Copa Libertadores finalists – will undoubtedly strengthen, with Mineiro desperate to change the current duopoly between the pair into a triopoly of three Brazilian powerhouses.

So long as they can replace the older players gradually with younger options, but keep the squad packed with the quality and depth they have possessed this year, then the good times should continue to follow in Belo Horizonte. There is a new stadium coming next year, and Arena MRV will want to be hosting a side who can compete at the top level domestically and throughout the continent.

Here’s to the boys of Belo Horizonte – from the heroic Hulk to Éverson in between the sticks and everyone in between – they have been the deserved champions in the Brasileiros 50th year, with the potential of plenty more success around the corner.