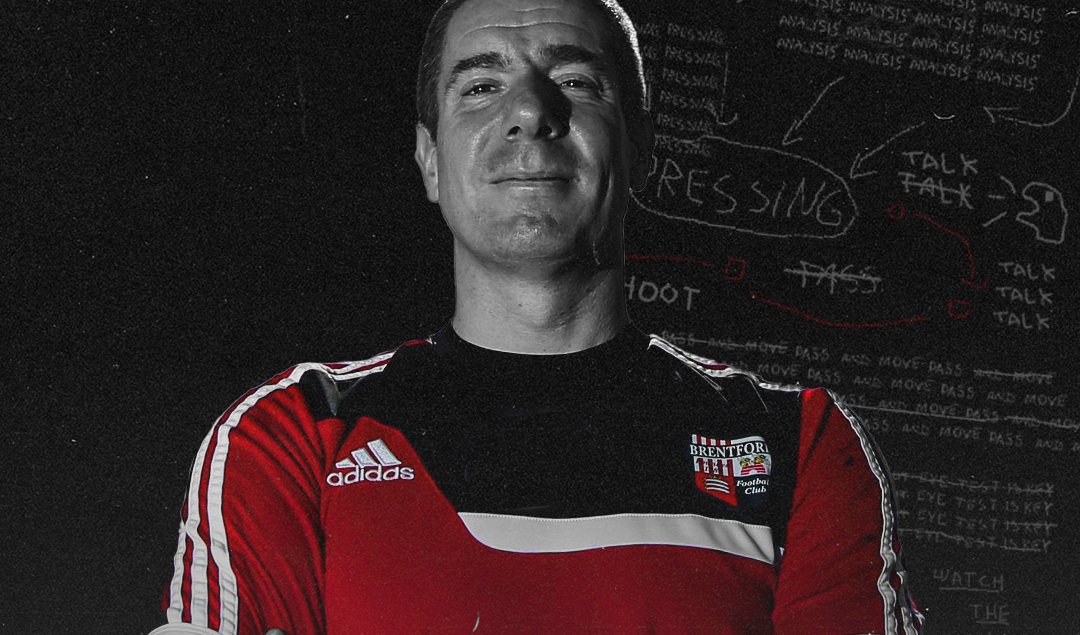 In the world of football these days, it takes bold minds, great thinkers, risk-takers and innovators to change the usual norm, to use a limited budget to achieve success, to outthink the richer clubs, and to use unorthodox methods to succeed in a hugely competitive sport. This is exactly what Mathew Benham has achieved at Brentford in his nine years as owner of the club.

Benham has taken the club from lower league obscurity in a short space of time to the cusp of Premier League promotion by using unique models, statistical trends, and data to push the boundaries of achieving success without the riches that most clubs have access to. One of the core values Benham has instilled in the club since he took over in 2012 is the ability to take a calculated risk, and this happens by being innovative, having the ability to outthink the much bigger and better teams around them and above them in the different tiers of English football.

As underdogs, Brentford have to think differently from the rest of the London clubs around them such as Chelsea, West Ham, Fulham, Tottenham, Arsenal, and Crystal Palace. The presence of these clubs has gone a long way to help Brentford go about their business quietly, and Benham’s philosophy is bringing the club into the limelight. He had cracked the football betting market through the use of algorithms and formed his own betting company Smartodds in 2004, which provides statistical research and sports modeling services to gamblers.

Benham’s ideas were always going to take time to implement in England, so in 2014 he decided to try it in the less popular Danish league, with underperforming FC Midtjylland.  Benham gathered a team with similar ideas like Rasmus Ankersen who was chairman and now serves as co-director of football at Brentford with Phil Giles.

They started looking at “football inefficiencies, “ a term coined by Ankersen, who believes to outthink and outsmart the competition you have to be able to be innovative especially if you do not have the resources and the wealth of your rivals. So far they have achieved this by using a similar model to what Benham used for his betting company to predict goals and assists; they even went as far as getting a free kick coach, a specialist kicking coach, and even a throwing coach, philosophy coach all to make sure the players are well drilled and the best that they can be.

The introduction of these coaches made sure they scored 25 goals from set-pieces in the 2014/2015 season more than the second team. Since 2015, Midtjylland have won the league twice, a testament to the success Benham and Ankersen can produce with their methods.

Since Benham took over at Brentford the club has seen a steady rise after gaining promotion from League One in 2014, advancing to the Championship play-offs in 2015, and maintaining consecutive top-half finishes in England’s second tier. Crucial to this success has been strategic planning, innovation, and the use of data analytics by Benham and Ankersen.

Ankersen uses the “David and Goliath “ example as an analogy in football for if you aren’t as wealthy as your rivals, then you need innovative ideas to beat your rivals. Benham’s own model was Dick Fosbury an Olympic medallist who won the high jump Gold by coming up with a new innovative way to jump and Benham wanted his club to be the football equivalent of Fosbury.

They didn’t have the commercial revenue or hospitality of other clubs above them in the championship and beyond. Griffith Park, the stadium that they played in from 1904-2020, had only 60 hospitality places compared to 2900 on the new ground of Brentford Community Stadium, so you can see they needed enough money to survive by beating the transfer market and getting players for the right money which they could later sell for a profit.

Things began to change dramatically for Brentford in 2015 when coach Mark Warburton left because he didn’t like the ideas of Benham moving forward,  Benham decided to go with the European model of a sporting director and head coach. In their new recruitment structure, they used a mixture of traditional scouting and other tools including mathematical modeling.

This system ensured the head coach didn’t recruit the players; the sporting director did, and any coach that was coming in had to work alongside the sporting director. The club finally brought Dean Smith, appointing him on November 30, 2015 after a successful spell with Brentford, and Smith brought stability to the club and aligned with Benham’s way of thinking and the supporters were buying into it.

Fast forward to May 2016, Benham had grown tired of big clubs coming to scoop players from their academy. The likes of Ian Poveda and Josh Bohui had gone to Manchester City and Manchester United, respectively, so Benham scrapped the academy after getting next to nothing for two talented players.

For Benham, the academy did not make financial sense as it cost in the region of £1.5 million annually and he decided to invest that money in a newly formed “B-Team.” The model for this team was taking players from the bigger teams who had a lesser chance of succeeding and also getting players from lower division clubs around the continent who had the talent and fitted their profile.

This model enabled Brentford to pick up players unwanted by bigger clubs or those termed as rejects and for overseas players an easy and clear path to English football and the bigger dream of the Premier League if they had the desire and were willing to work hard. These players were well scouted not just based on talent but on their attitude, desire and ability to adapt to a new country.  The aim of the project was to get hungry and energetic players who were willing to prove themselves and had resale value.

Wales international Chris Mepham is one such example. Released at Chelsea at 14, Mepham was picked up by Brentford developed and sold to Bournemouth for a profit of £12.25 million in January 2019.  Romaine Sawyers joined from Walsall in July 2016, reuniting with Smith in London, and after three years at the club, he returned to former club West Bromwich Albion, with Brentford receiving a reported fee of £2.9 million.

Rather than buy a new midfielder, Brentford already had a Sawyers replacement lined up in the form of Josh Dasilva, who joined the previous summer on a free transfer from Arsenal; at 22 years old, Dasilva has emerged as one of the most promising talents in the Championship. It is a similar strategy that has seen them land hefty profits on Andre Gray, James Tarkowski, Neal Maupay, Jack O’Connell, and Ezri Konsa, all of whom have gone on to play in the Premier League.

Ankersen believes the best value for players lies in other leagues such as Ligue 2; having signed Bryan Mbuemo from Troyes for €5 million in 2019, Brentford could be set to double their money on the Frenchman soon. Ankersen and Benham used a special tool to identify undervalued talent, as their statistical model was based on judging what the league table would look like if all teams around Europe played in the same league and identifying teams with more quality than Brentford, and finding affordable players from clubs above them.

October 2018 saw the appointment of Thomas Frank after Smith departed for Aston Villa, with Benham and Ankersen taking a chance on the Danish coach after he reached moderate success with Brøndby IF. Frank had spent the past two years serving as an assistant coach alongside Richard O’Kelly at Brentford, and after a rocky start to the season, the Bees reached stability after Frank switched to a 3-4-3 formation.

After finishing 11th the 2018/19 campaign, Brentford sold a variety of stars such as Sawyers, Maupay and Konsa for hefty profits whilst also bringing in the likes of Christian Nørgaard, David Raya, Mathias Jensen Ethan Pinnock, and Pontus Jansson. Frank set his team up in a 4-3-3, with Henrik Dalsgaard and Rico Henry as the fullbacks, Raya playing between the sticks, and either Pinnock or Julian Jeanvier partnering Jansson in defense.

In the center of the pitch, the Danish duo of Nørgaard and Jensen played alongside Dasilva in Frank’s midfield trio, whilst the famed ‘BMW’ attacking trident of Saïd Benrahma, Ollie Watkins and Bryan Mbuemo dazzled in the final third, combining for nearly 60 goals between them. Brentford returned from lockdown with a chip on their shoulder, winning seven consecutive matches and conceding just two goals in the process.

It seemed that the Bees would sneak into the automatic promotion spots in the final week of the season, with West Brom dropping points to Blackburn Rovers and Fulham to put Brentford in the driver’s seat for second place. However, they collapsed under the pressure, losing to Stoke City and Barnsley, both of which had staved off relegation by the scruff of their neck. As such, the Baggies and Leeds United sealed promotion, whilst Brentford would have to duel it out in the playoffs.

The first match was a heated affair, with Swansea City and Brentford combining for a total of six yellow cards. The home side took the momentum after Henry’s expulsion and headed into the second leg with a one-goal advantage following André Ayew’s late goal. However, Brentford turned it around in their final match at Griffin Park, winning 3-2 on aggregate and booking their ticket to Wembley Stadium.

Fulham and Brentford headed into extra time after both teams failed to muster a goal, with the likes of Watkins, Mbuemo, and Josh Onomah failing to find the back of the net. As fate would have it, the opening goal would come from the unlikeliest of sources: a long-range free kick from Fulham left back Joe Bryan. To seal the victory, Bryan skipped into the edge of the box, played a quick one-two with Aleksandar Mitrović, and fired his second goal past Raya.

With Brentford remaining in the Championship for another season, two of their biggest attacking talents departed for Premier League teams; Watkins joined Aston Villa for a club-record fee of £28 million potentially rising to £33 million, whilst Benrahma headed to West Ham on a season-long loan that was later made permanent for £25 million + £5 million in bonuses.

Despite losing both Watkins and Benrahma, Brentford currently find themselves second in the Championship table with 57 points from their first 29 matches. Crucial to their form has been the arrival of Ivan Toney, who joined from League One side Peterborough United on August 31 for an initial fee of £5 million with £10 million in add-ons.

Toney currently leads the Championship’s scoring charts with 23 goals and 9 assists in 29 matches, making him the third Brentford striker to surpass the 20 goal mark in one season after Watkins and Maupay. Alongside the likes of Sergi Canós, Marcus Forss, Tarique Fosu and Mbuemo, Brentford are proving to have ample firepower to go the distance with 55 goals thus far — a whopping 12 goals more than their nearest competitor (Bournemouth).

Only time will tell if Brentford will end up playing in the top flight for the first time since 1947, but one thing’s for certain: thanks to the innovative work of Matthew Benham and Rasmus Ankersen, Brentford have gone against the grain and traveled from League One to the cusp of a Premier League berth.