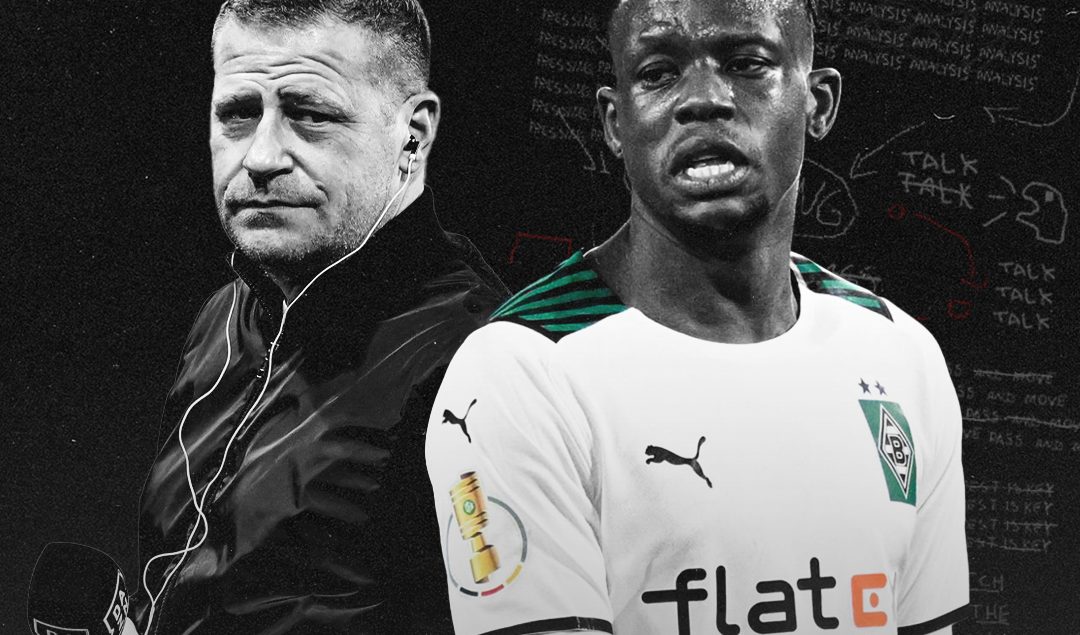 Having taken just 1 draw out of their final 5 matches before the winter break, Borussia Mönchengladbach’s Christmas holiday should have been the wake-up call for manager Adi Hütter, and his out-of-form squad, to turn around the rot at the Borussia-Park.

However, despite temporarily lifting the mood with a 2:1 win over Bayern, Borussia Mönchengladbach have failed to pick up any points in their subsequent matches, drifting further into a relegation battle less than 12-months after they made it to the round of 16 in the UEFA Champions League.

Max Eberl, M’gladbach’s beloved sporting director who played almost 150 matches for the club, has even come under fire in recent weeks.

Since taking over the role of Sporting Director almost 14-years ago, Eberl has followed a hard line regarding the importance of continuity, and playing within the club’s financial means.

Whilst lavish over-spenders like Werder Bremen, Hamburger SV, and Schalke 04 have slid into decline, Gladbach’s more modest approach has allowed them to make the leap from a topflight yo-yo club into a regular European aspirant, all the while staying true to their identity and tradition as the self-sufficient Traditionsverein with local roots in the region.

Despite the pressures of a topflight becoming ever more populated with clubs bypassing the 50+1 regulations, Eberl has refused to turn to overseas investment or a high-risk spending strategy.

It’s one that has earned him plenty of fans around Germany (and even interest from FC Bayern), but it is also a fantasy that is beginning to unravel as the global game enters its 22nd month since the onset of the pandemic.

Since Germany’s first-ever Geisterspiel (ghost-game, or game behind closed doors) in March 2020, Borussia Mönchengladbach’s 54,000 seater-stadium has been able to host full capacity crowds on just 4 occasions.

That’s 33 matches with little to no matchday incomes, which, replicated over a 2-year spell, has left Die Borussen with a missing revenue stream of over €65.00m.

For sides with a global brand (FC Bayern & Borussia Dortmund), with strong corporate company backing (VFB Stuttgart, VFL Wolfsburg, Bayer Leverkusen), or ownership with ‘extra’ deep pockets (TSG Hoffenheim, RB Leipzig, FC Augsburg, Hertha BSC), the lack of matchday income may not be fatal. But, for a club with Gladbach’s ownership model, it inevitably leads to demise on the pitch.

Add to this the fact that the revised television deal for the 2021/22 season sees Bundesliga clubs receive €18.00m less than the previous campaign, and we quickly come into dangerous territory regarding the competitiveness of a Gladbach model in an era unsuited for meager spending and risk-averse squad building.

Operating with a one-in-one-out model (balancing transfer incomes with spending), Gladbach have cumulatively spent just €25.00m in the last 4 windows (not including January 2022) – less than what any of the 20 Premier League clubs have given out this season alone. 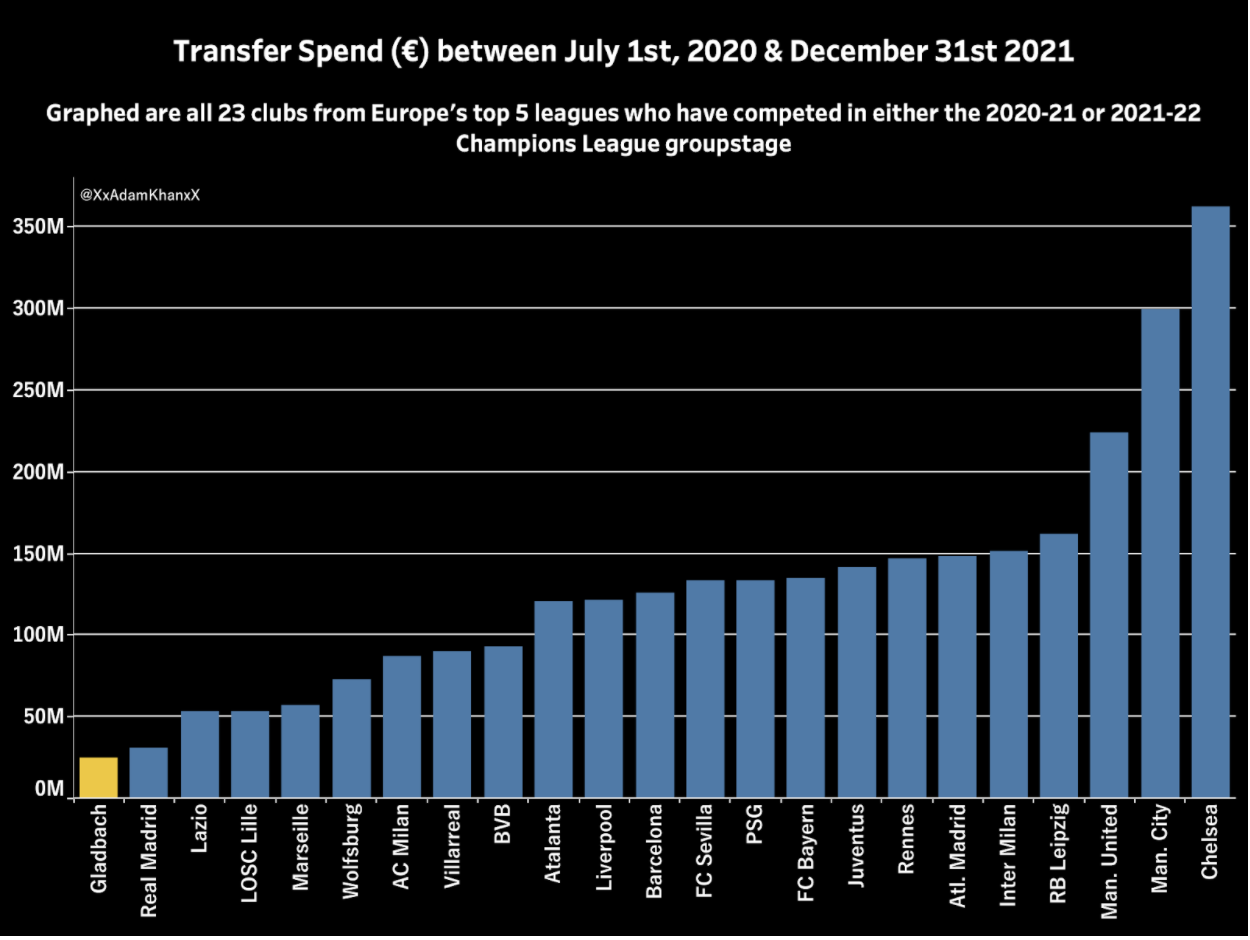 The Premier League may be operating with unprecedented riches, but even the other 22 teams (from Europe’s top five leagues) who have appeared in the Champions League since the beginning of last season have all spent significantly more than Borussia M’gladbach.

This modest transfer activity is perhaps the first area where one can really ask questions about the work of Max Eberl. With a one-in-one-out model, Gladbach are reliant on constant turnover to finance new signings.

Whilst earlier in the decade they would routinely cash in with prominent departures, in recent windows their outgoing activity has ground to a complete halt (pictured below). 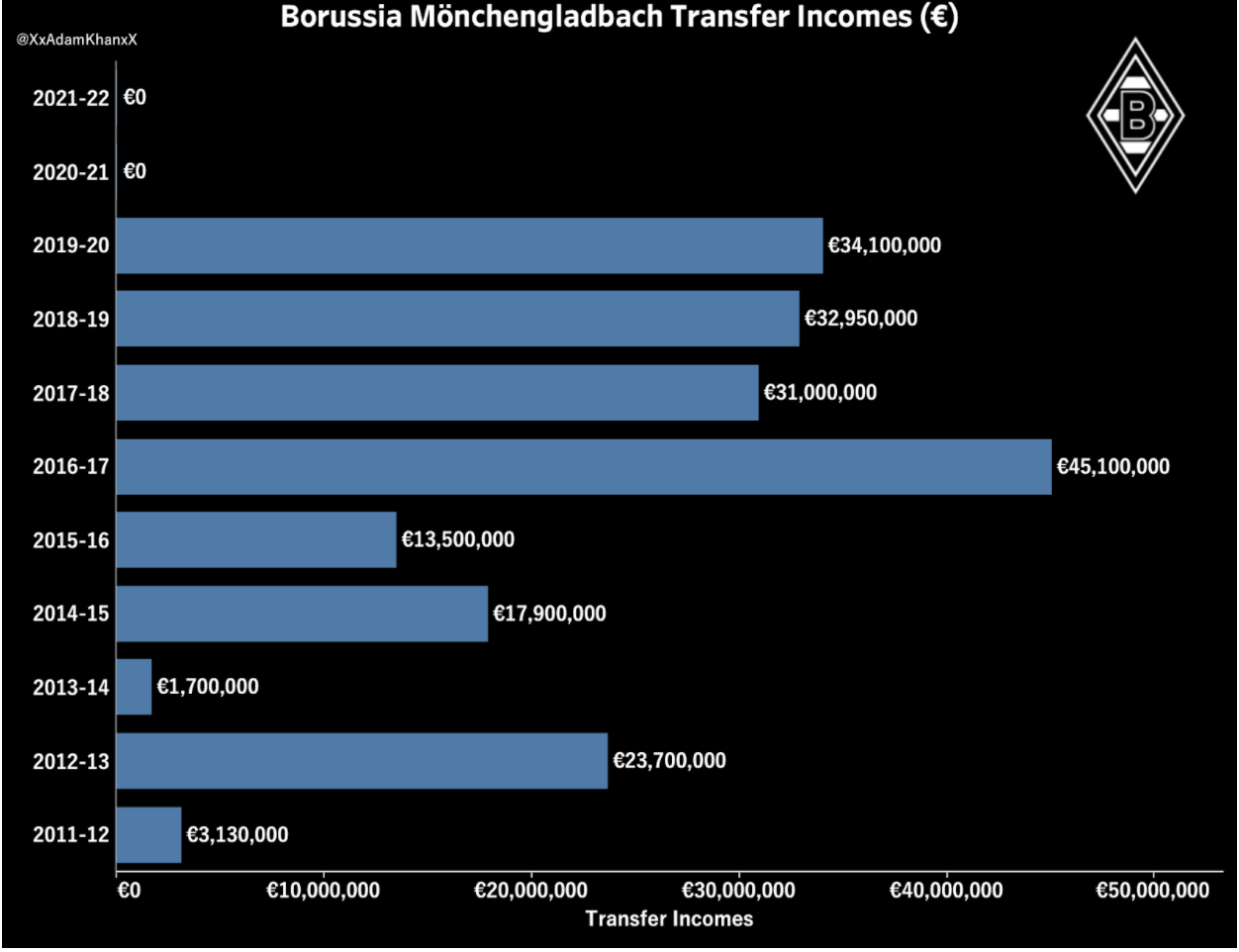 Of the 20 clubs to feature in the Bundesliga since August 2020, Gladbach is the only one that has failed to realize any player sales.

Instead of looking to sell for a profit when the opportunity arises, Eberl has taken a gamble by retaining all his marquee assets. His hope was that by keeping the squad intact, Gladbach would now be viewed as a shoo-in for European football, akin to the role which Borussia Dortmund occupies in German football.

Ultimately, Max Eberl’s wager left him red in the face. Last season Gladbach completely missed out on Europe despite sitting in a qualification spot at the end of 17 of the Bundesliga’s 34 matchdays, whilst this season any hopes of a swift turnaround all but vanished following their humbling defeat to Union Berlin on MD20.

Already this January we are beginning to see the major repercussions from this planning, and sporting, failure. In Denis Zakaria and Matthias Ginter, Eberl has two integral starters who could have been sold last July for upwards of €40.00m, but instead will now leave the Borussia-park on a free transfer this summer.

Such crucial misjudgments are abundant in a Gladbach squad boasting playing personnel far too good to be sitting on the couch between Tuesday and Thursday night.

It’s a squad that has been together longer than any other side in Germany’s top 3 divisions and now has various contracts running down without any resolution in sight.

Though the departures of Ginter and Zakaria are clearly the most high-profile cases, 16 other players have deals expiring within the next 18 months.

Particularly Hofmann and Thuram will not be satisfied with missing out on European competition in a World Cup year, so they too could force through a transfer far below market value.

This frustrating dilemma brings us back to the keyword of continuity, the crux of Eberl’s managerial legacy, but one which has now come full-circle to bite him in the backside.

As we saw throughout Jürgen Klopp’s revolution at Liverpool, or even Hansi Flick’s FC Bayern treble, maintaining a strong core of players willing to identify with the club over an extended period of time is a prerequisite for success.

However, when the trophies never arrive, or success begins to falter, it can leave one hopelessly exposed, and never more so when contracts wind down and player buy-in diminishes.

We often talk about the difficulties of stabilizing in the topflight after arriving from the second-tier. The famous second-season syndrome where tactics are found out and star performers are plucked away has seen even the greatest projects falter.

For every FC Augsburg, there are countless cautionary tales from FC Ingolstadt in 2017 to Hannover 96 two years later.

On second thought, though, perhaps the even more difficult jump is the one from mid-table anonymity, to being a club that consistently aims for Europe.

It’s what has seen Eberl sway away from his former mantra to strike when the iron is hot and sell the club’s most promising talents, and it’s now left Gladbach in a dire mess where countless prominent players could leave for pennies.

With European football further away than at any other point in the past decade, Gladbach would be smart to use the next few seasons to rebuild the squad around their rising young talent – Luca Netz (18), Joe Scally (19), Kouadio Koné (20), Jordan Beyer (21) – players who have proven this season they are ready for the demands of Bundesliga football, and capable of reestablishing the club’s roots.

Returning to the model of a selling club may not be appreciated by a core set of fans longing for the club’s first title in over 25-years, but it is the only way Borussia M’gladbach can bridge the gap between themselves and the traditional European elite.

Only with this supposed backward step can Die Fohlen-elf re-establish their foothold in German football, and begin the process of once again becoming a side that is consistently present in the Bundesliga’s race for top 4.

Thanks for reading till the end! Why not check out more Bundesliga content with a free subscription to Adam Khan’s German Football Newsletter!