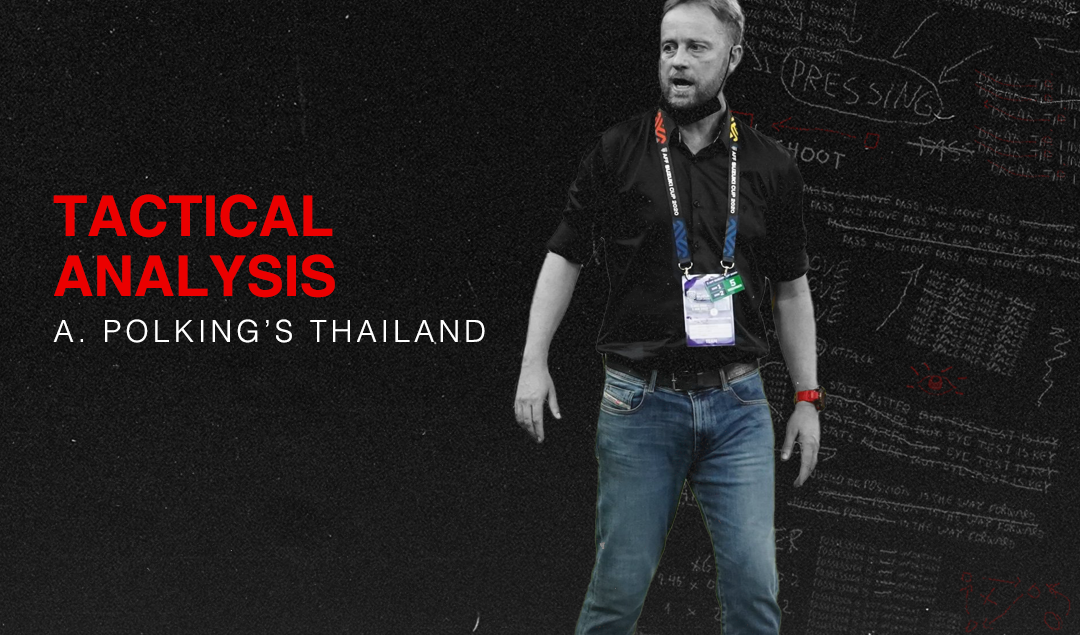 Alexandre ‘Mano’ Pölking was born in Brazil to German parents, moving to his ancestral country at a young age and playing for various German clubs such as Arminia Bielefeld, VfB Fichte Bielefeld, SV Darmstadt 98, before departing for Cyprus in 2005 and spending the final two years of his footballing career in the tiny island nation in the middle of the Mediterranean Ocean.

Pölking did not take long to switch over from playing to managing, with the retired Brazilian-German winger enjoying adventures as an assistant manager at Abu Dhabi-based Al Ain and Azerbaijani side FK Baku, where he worked in the technical staff of Winfried Schäfer.

Following a brief spell as an assistant coach at South African side Golden Arrows, Pölking reunited with Schäfer in the summer of 2011, becoming the assistant coach of the Thailand national team. After two years, Pölking took on his first head coach position at 36 years of age with Army United, where he would win 14 games, draw 9, and lose 11.

Shortly after leaving, Pölking took a position at another Thai club — Suphanburi F.C. — where he would remain for four months before accepting an offer in the summer of 2014 from Bangkok United F.C. In a six-year spell at the club, Pölking’s side finished as league runners-up in 2016 and 2018, as well as the runners-up in the Thai FA Cup in 2017.

In October 2020, Pölking elected to leave the Bangkok Angels and join Vietnamese side Ho Chi Minh City FC. His journey in Vietnam did not last long, as the outbreak of the COVID-19 pandemic saw the Vietnamese league canceled for a lengthy period. In total, he would pick up four wins, two draws and six defeats there.

In September 2021, ‘Mano’ returned to Thailand for a new adventure: to take charge of the Thailand national team and replace Akira Nishino. With no trophies apart from three Thai League 1 Coach of the Month awards, Pölking’s record and experience was called into question upon taking charge of the national team.

Pölking had just a few months to prepare before picking a 30-man squad and heading to Singapore for the 2020 AFF Championship, officially known as the AFF Suzuki Cup 2020. Thailand kicked off their tournament on December 5, 2021, with a 2-0 victory over Timor-Leste, followed by a 4-0 win over Myanmar, a 2-1 win over Philippines, and a 2-0 win over Singapore.

In the AFF Championship, Pölking’s Thailand utilized a 4-3-3 and a 4-1-2-1-2 formation on varying occasions, two formations that, whilst numerically different, share the same basic fundamental purpose. 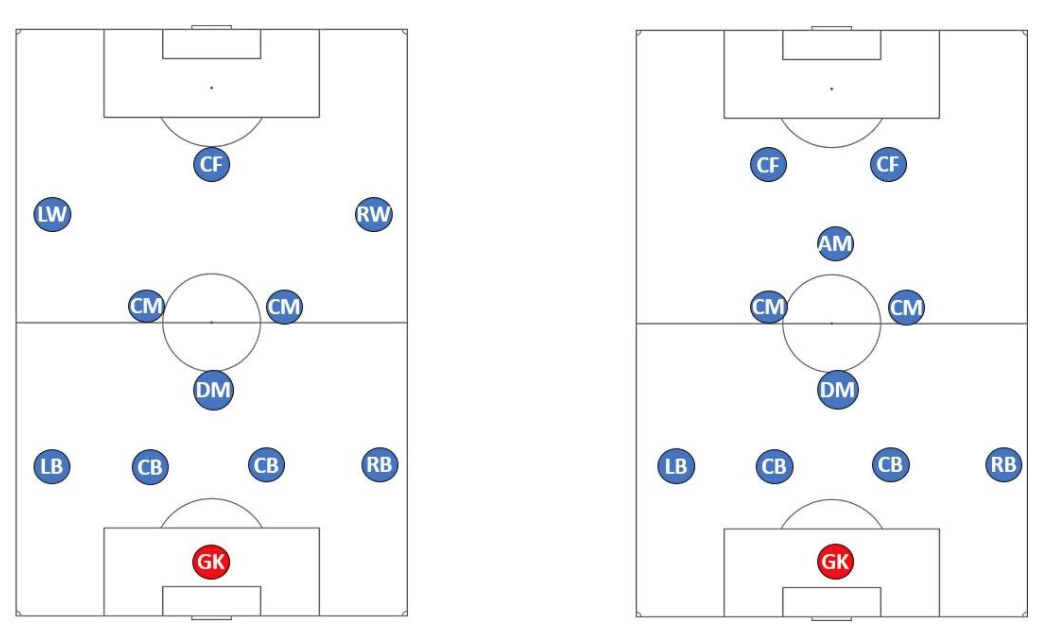 Mano seems to know exactly what his team is capable of and his varied and versatile approach shows great knowledge of his opponents’ weaknesses and strengths. Having explained the formation numerically, now let’s see how they play in various stages of games.

Pölking places a massive emphasis on positional play at every phase of the game, and naturally, he prefers his team to play from the back in the first phase. One of their mechanisms in the first third is as follows: two center backs stay centrally, whilst the left back tucks inside to create a back three, and the right back pushes forward to maintain width.

Thailand enjoys superiority with a 3v2 numerical advantage in the first phase of build-up. In this situation, the opponent is reluctant to press high and prefers to maintain a compact defensive block without the ball. 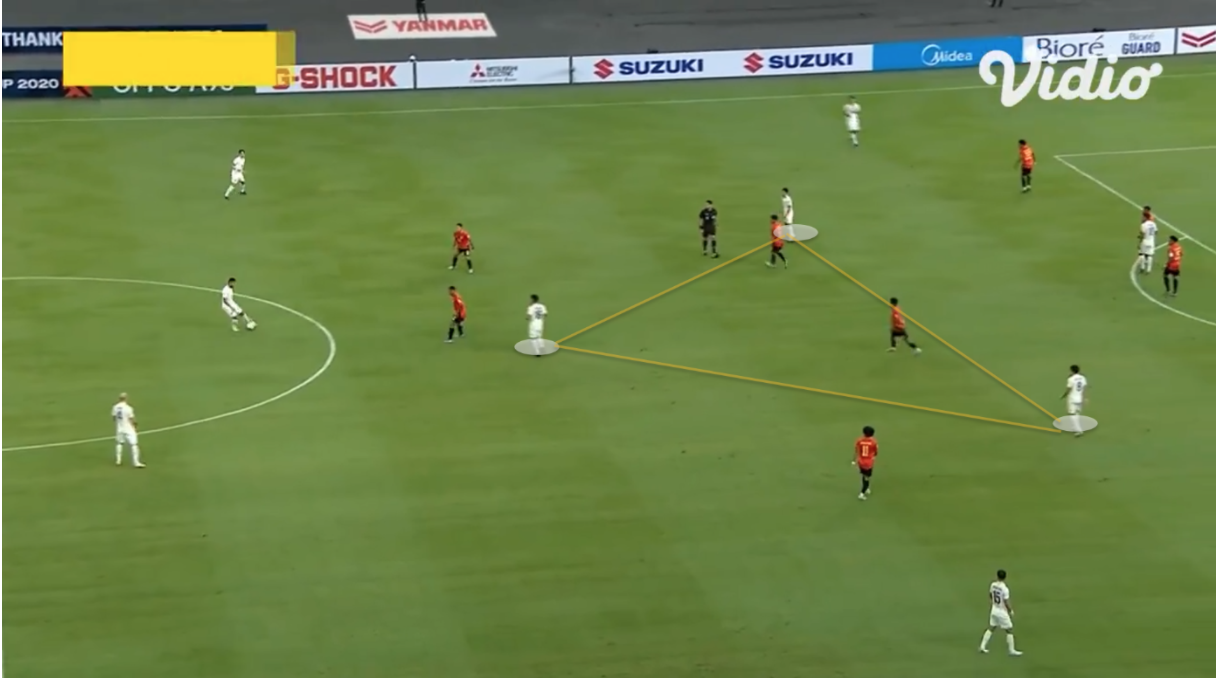 This situation makes their midfield important. Whether it is a central midfielder or an attacking midfielder, they position themselves behind the opposing midfield line.

The purpose here is to cause confusion in the opponent’s defense and, as a result, they tend to create great danger when receiving in the area. 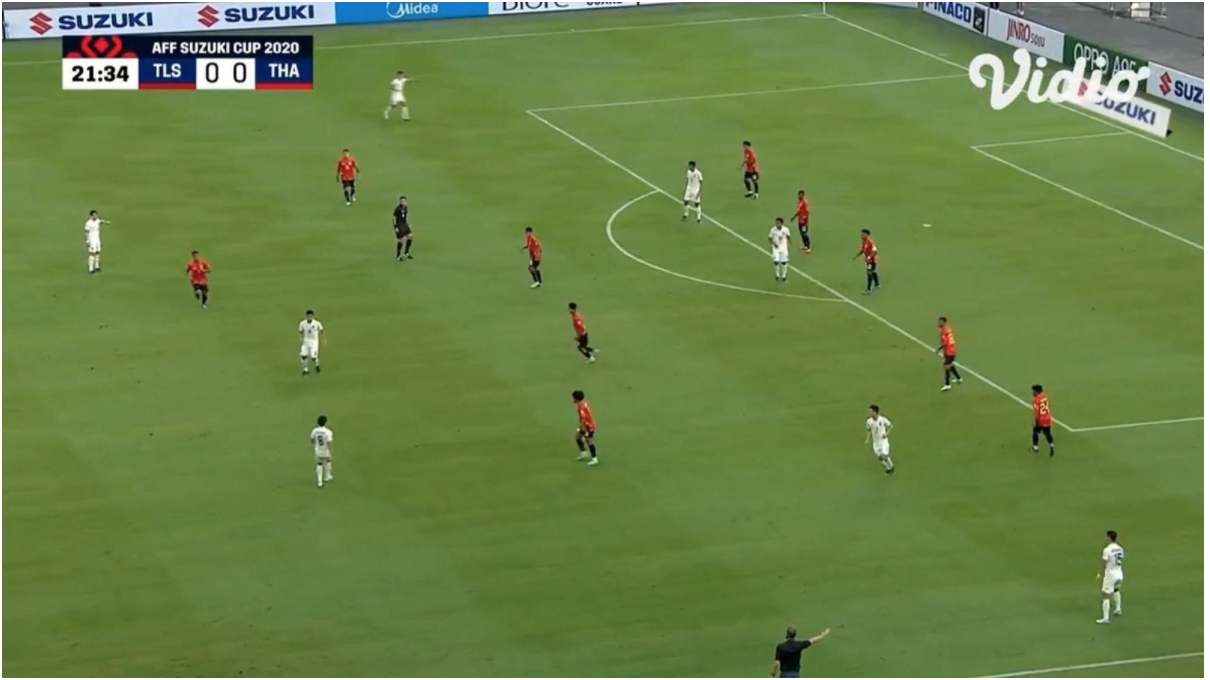 As they get closer to the opponent’s goal, the mobility of the forwards shows up, with the winger cutting deep into the center lane. To pull the opposing defense in, they seek to create space on the flanks which can then be exploited to send crosses into the crowded penalty area. 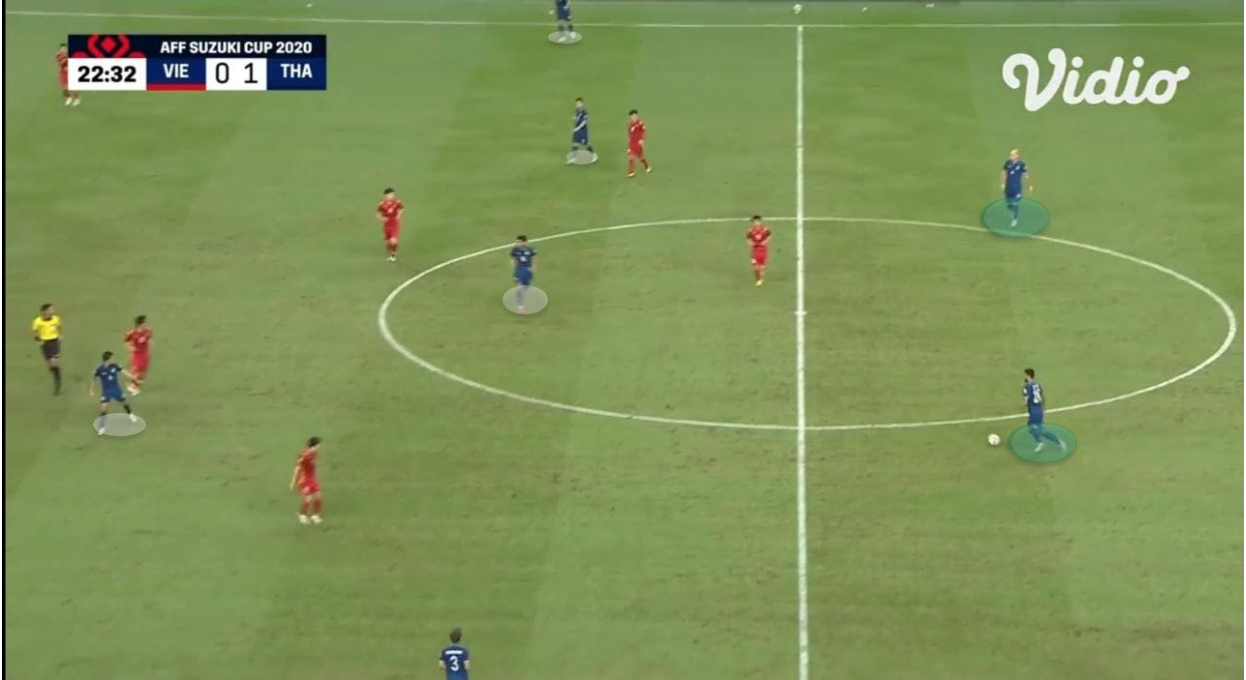 We can see an example of this with Thailand’s midfielders situated at different positions between the lines. It is a fluid attacking build-up, as the two defenders are not too wide, only 20 meters apart from each other. The right back pushes forward to maintain width with the two central midfielders filling the half-spaces. 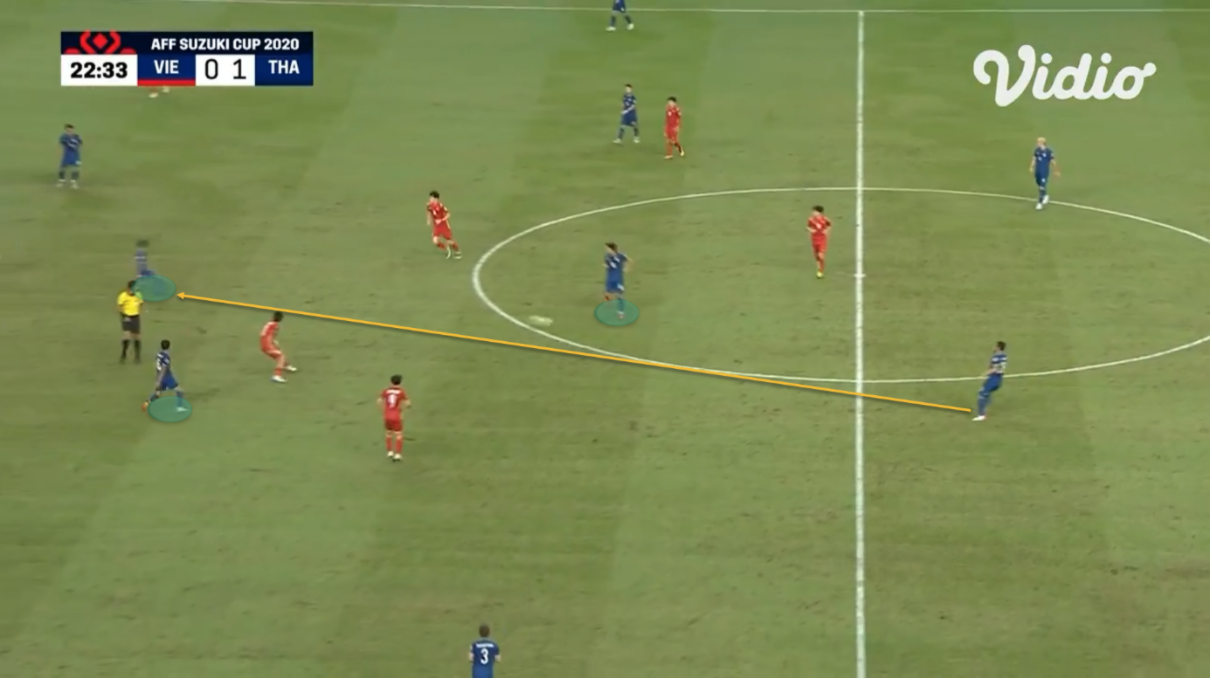 The movement of the Thailand central and defensive midfielders between the lines made the opposing midfielder confused, and that resulted in the opponent being horizontally exposed to create vertical space.

What Went Wrong for Bangladesh in Their SAFF Championship Match against the Maldives?

The centre back was able to send a vertical pass to the attacking midfielder, and then used a bouncing ball followed by a penetrating pass to a third player, an example of Thailand’s clever combination play. 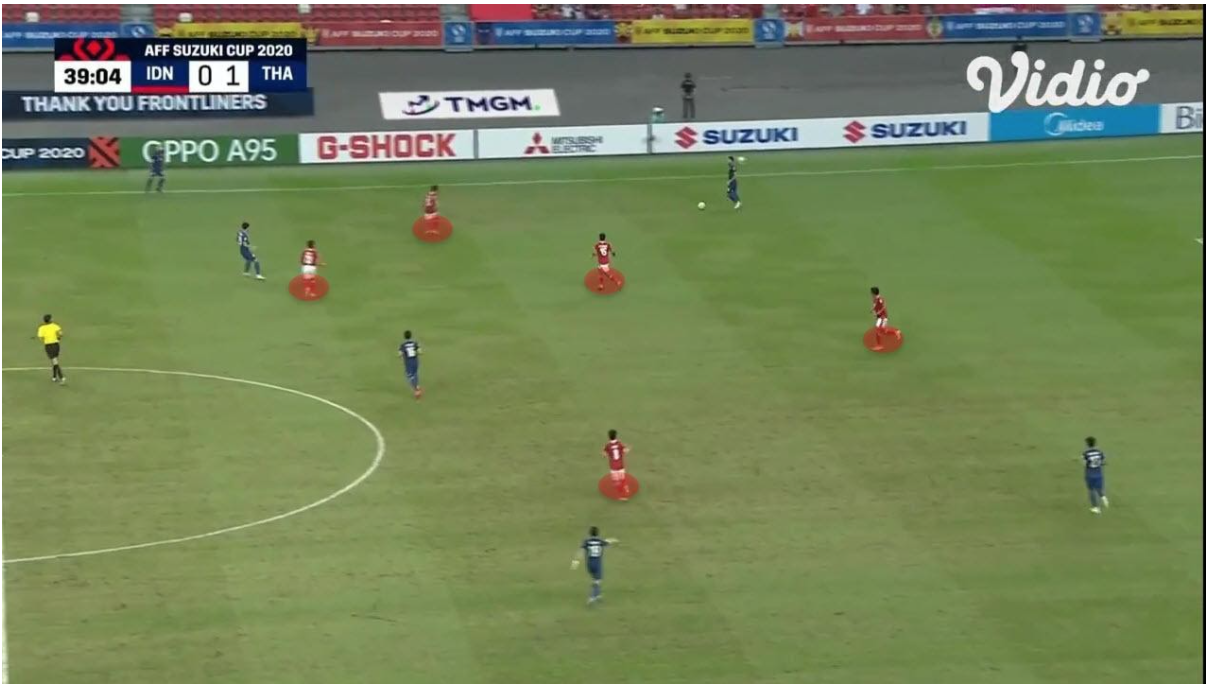 The Indonesian pressing block tries to direct the Thai build-up to one side, and the Indonesian players have also closed the nearest passing options. 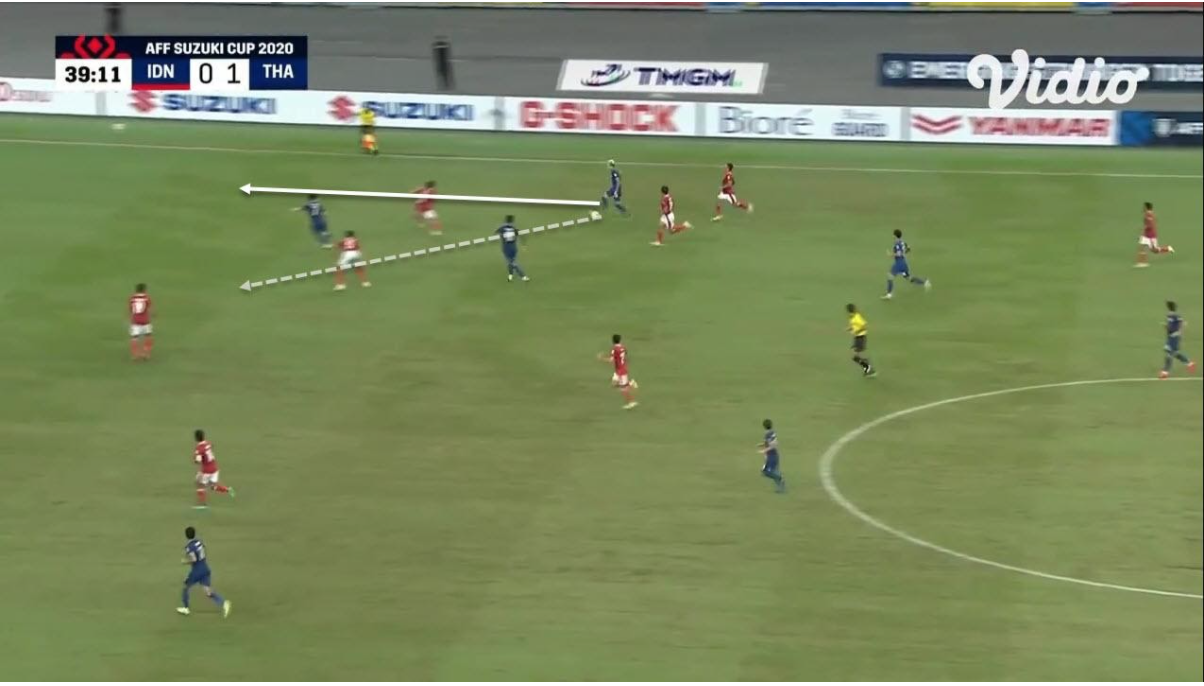 The Thai right back receives the ball and then progresses forward with his dribble, and when the Indonesian left back presses him to win the ball back, the ball is played forward where the ball-near attacker makes a run towards the penalty box. 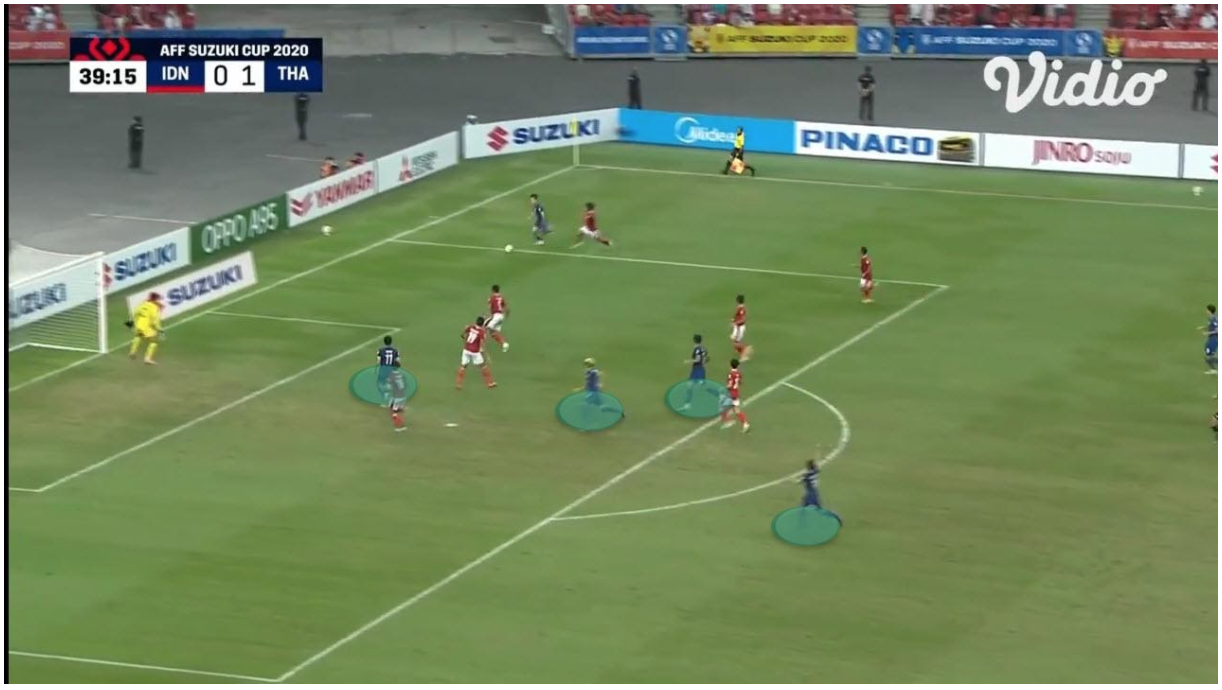 When the striker receives the ball and dribbles into the penalty area, Thailand’s attackers, central midfielders, and attacking midfielders attack the penalty box and create a lot of passing options, whether it’s for cutbacks or low crosses.

When they struggled to control the flow of possession, Thailand will turn to another off-the-ball mechanism: high pressing.

Thailand’s pressing is ball-oriented and they try to prevent direct access to their defenders to the opponents up front, whilst the attacking midfielder has the intelligence to mark the opposing defensive midfielders to prevent easy ball progression. 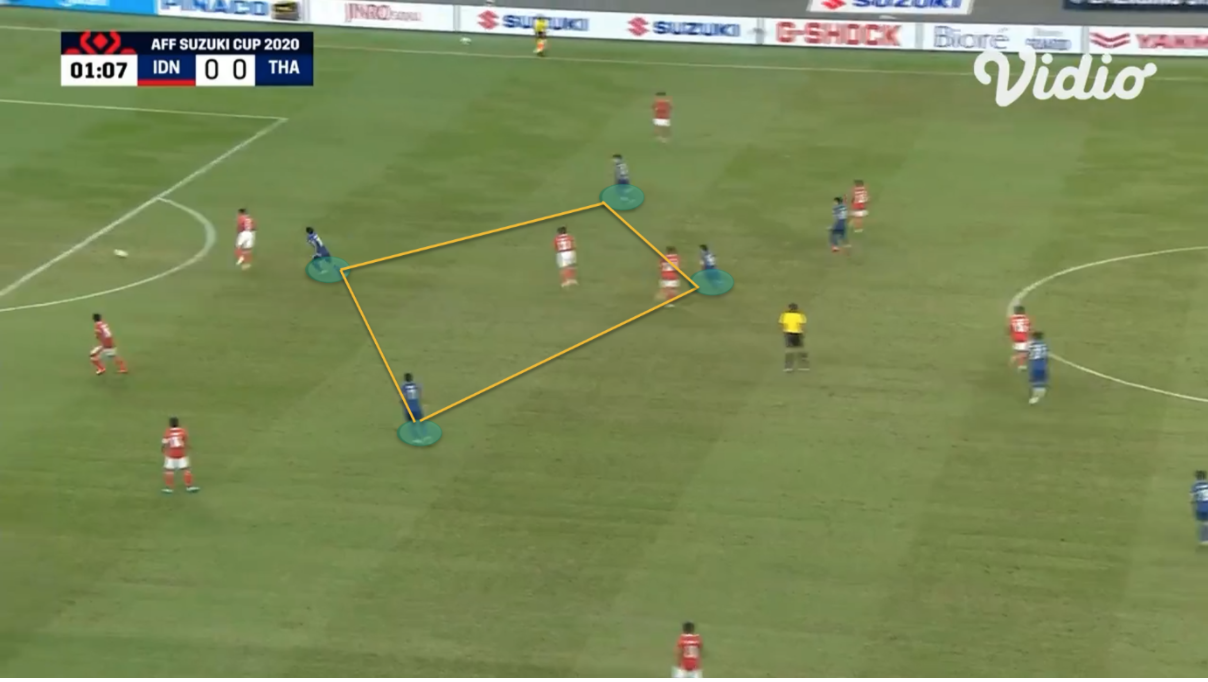 The Indonesia players, who were in possession, found themselves under intense pressure as they were being pressed by the Thai striker, and the other players were able to block the passing path to the central midfielder.

They played a back-pass to the goalkeeper, which served as a pressing trigger for Thailand and forced the goalkeeper to switch the play to the other flank. 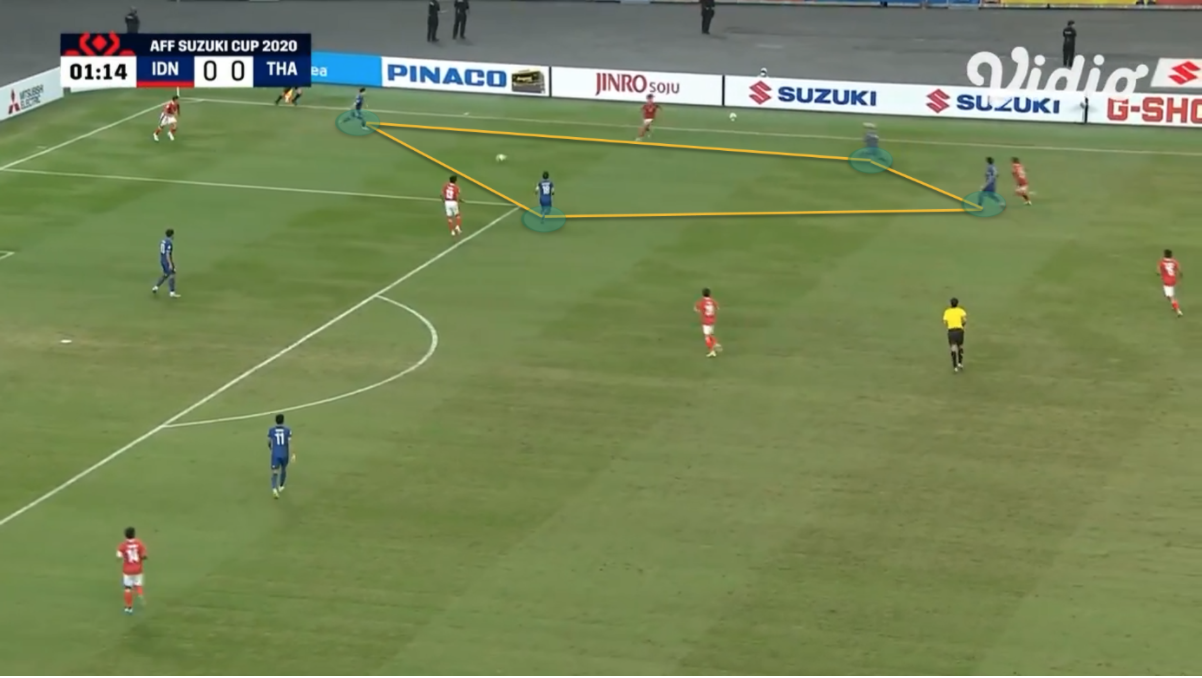 This forced the opponents to one direction, forcing them to pass the ball in that zone. Of course, the Thai players had isolated the Indonesian fullbacks who received the ball on the wings. They managed to snatch the ball from the opponents in their own third, a dangerous area for a potential goalscoring opportunity. 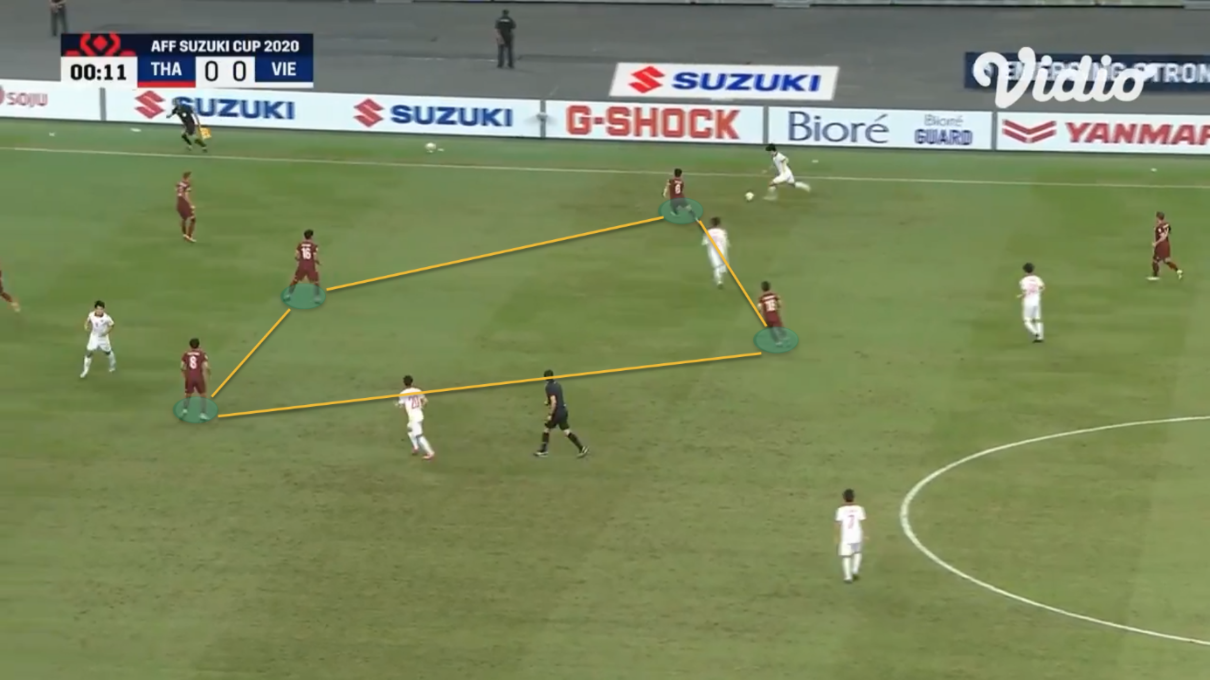 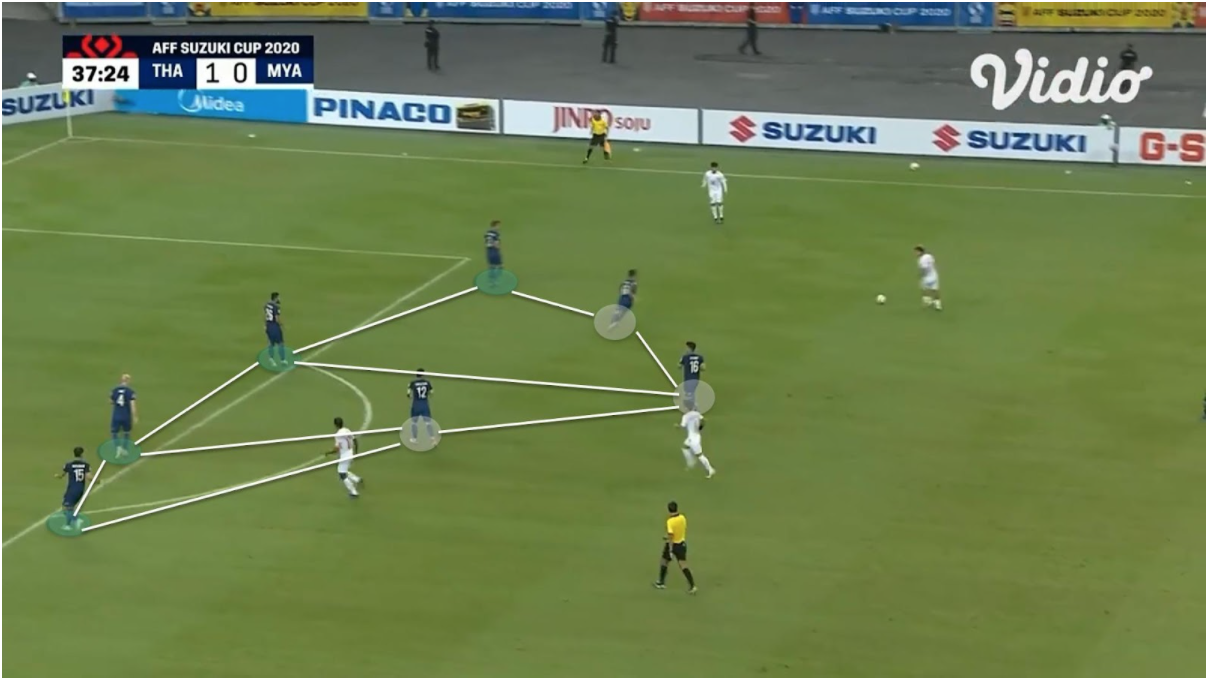 They always vacate the area that is not too dangerous (the wide area) whilst waiting for the ball to be moved to a wide area. If the opponent passes into a wide area, then they immediately press the opponent to the side of the field with a numerical advantage.

When the opponent is getting closer to their zone, Thailand still maintains their ball-oriented defensive principle: hit the opponent holding onto the ball and try to win the ball back. Two layers/ Staggered, creating a numerical advantage in the middle area. 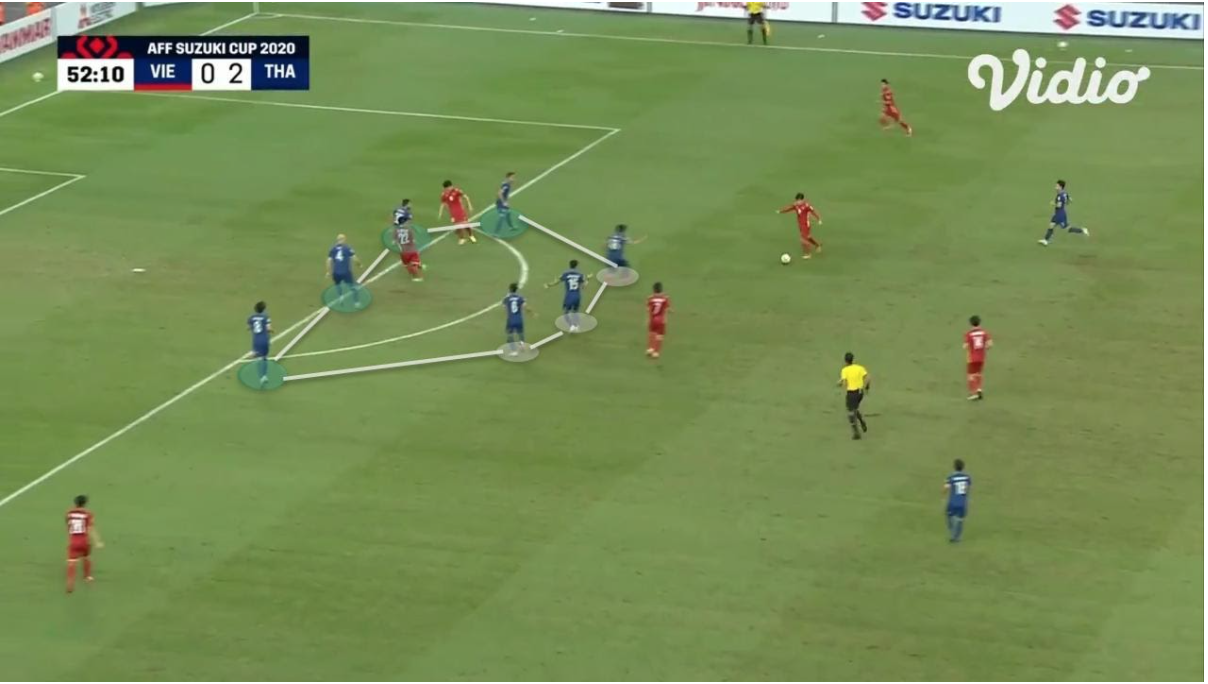 From the picture above, we see that Thailand is a team that knows how to control the rhythm of the game when not in possession of the ball, as can be seen from the principles applied by Mano Pölking. Thailand is a ball-oriented team that seeks to be constantly in control of the game.

How they switch to attack is one of Thailand’s biggest strengths, and they don’t hesitate to turn into a quick attacking transition as soon as they get the ball, with the midfielders and attackers playing crucial roles in this transition. 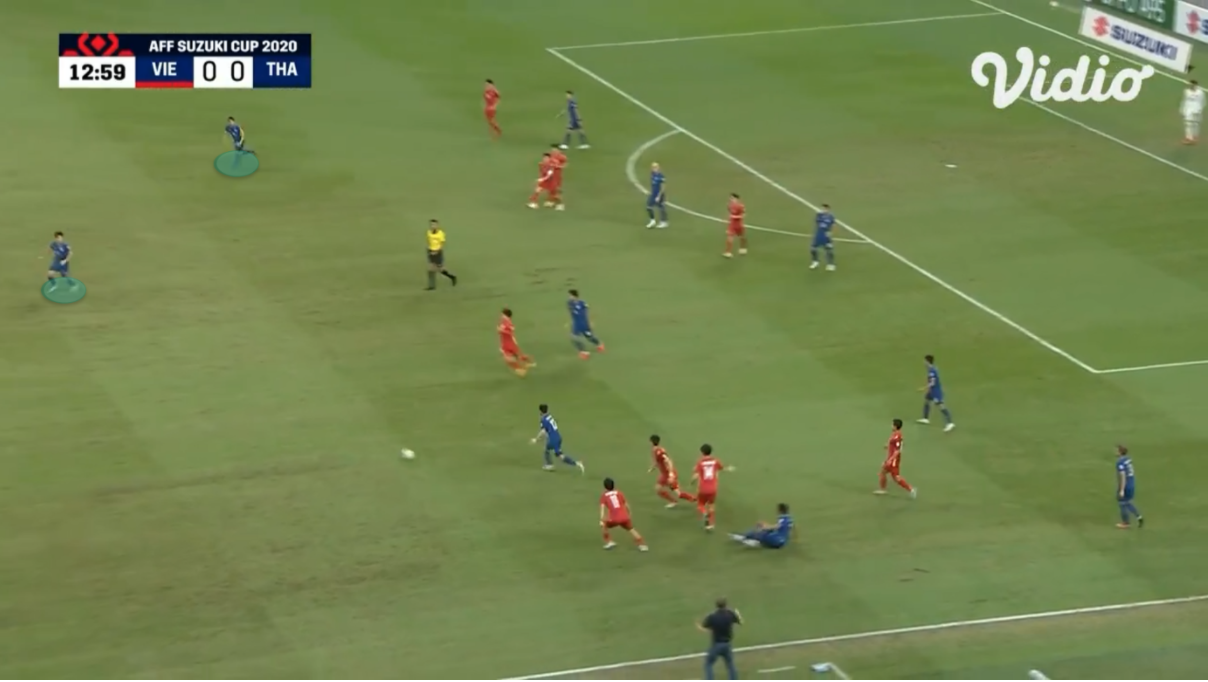 After recovering the ball, Thailand make a quick transition to attack: note the positioning of the midfielder. 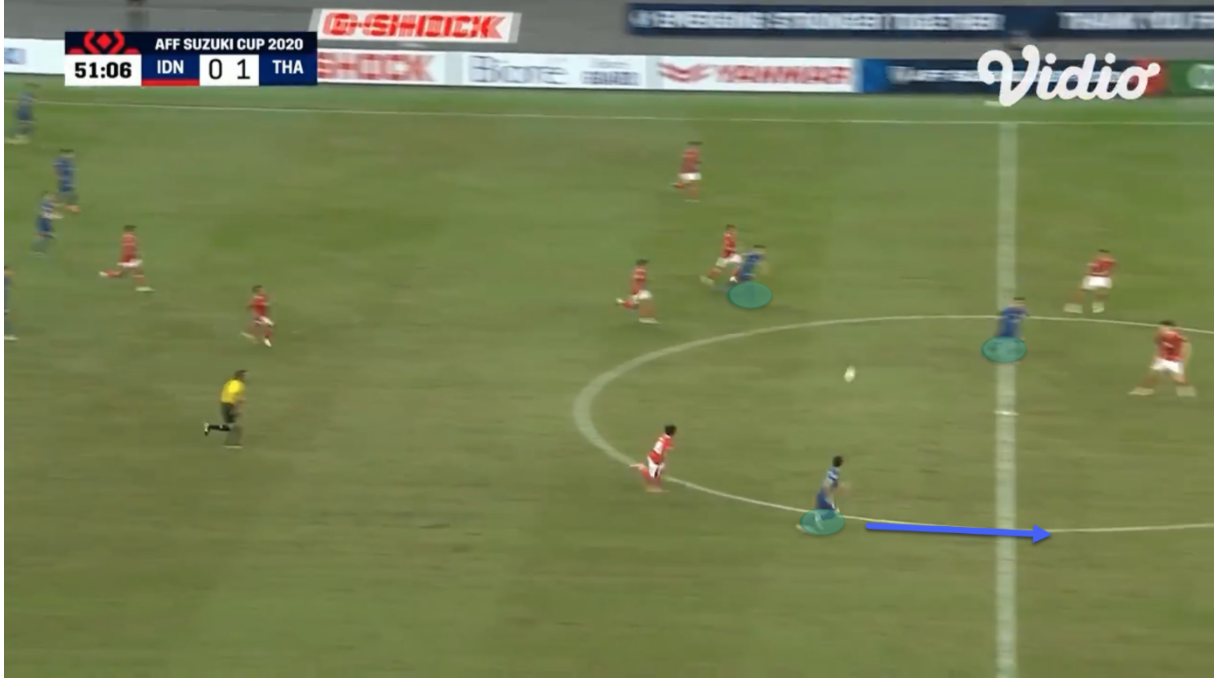 Together, the attacking midfielder and two strikers provide a very good rest offence. If unable to make a quick transition to the attack, the team will keep possession of the ball and build out from the back calmly.

When transitioning from attack to defense, they will quickly become more aggressive after losing the ball. 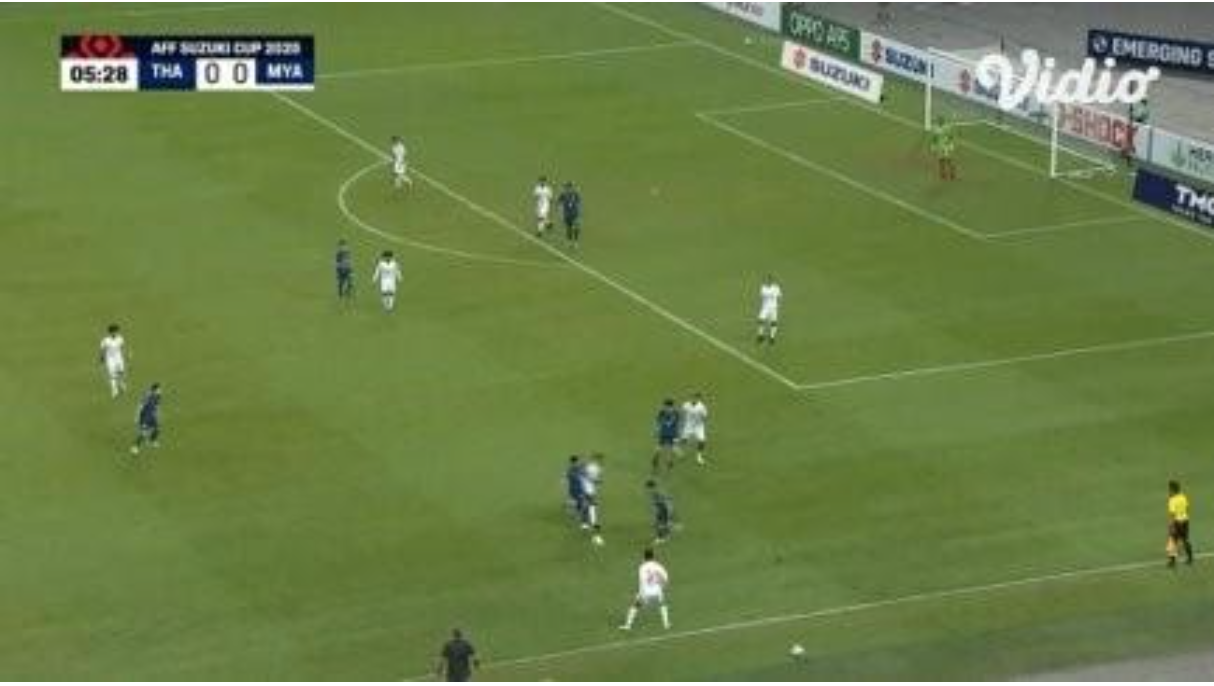 When they lose the ball, Thailand gather players close to the markers, forcing the opponent to make a mistake and then try to win the ball back. 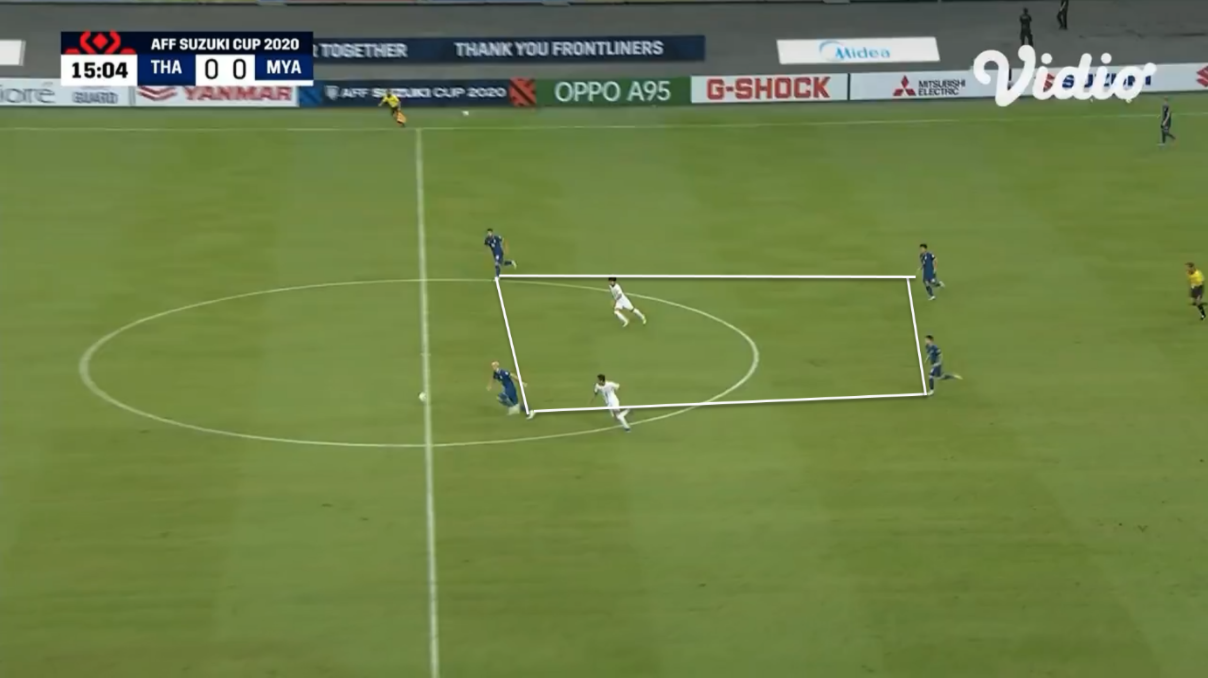 When Thailand loses the ball and fails to win it back immediately, the opposing player can push the ball forward on the counter. However, it is here where Thailand seek to control the opponent’s transitions and reduce the threat of their opponent breaking through on counter-attacks. 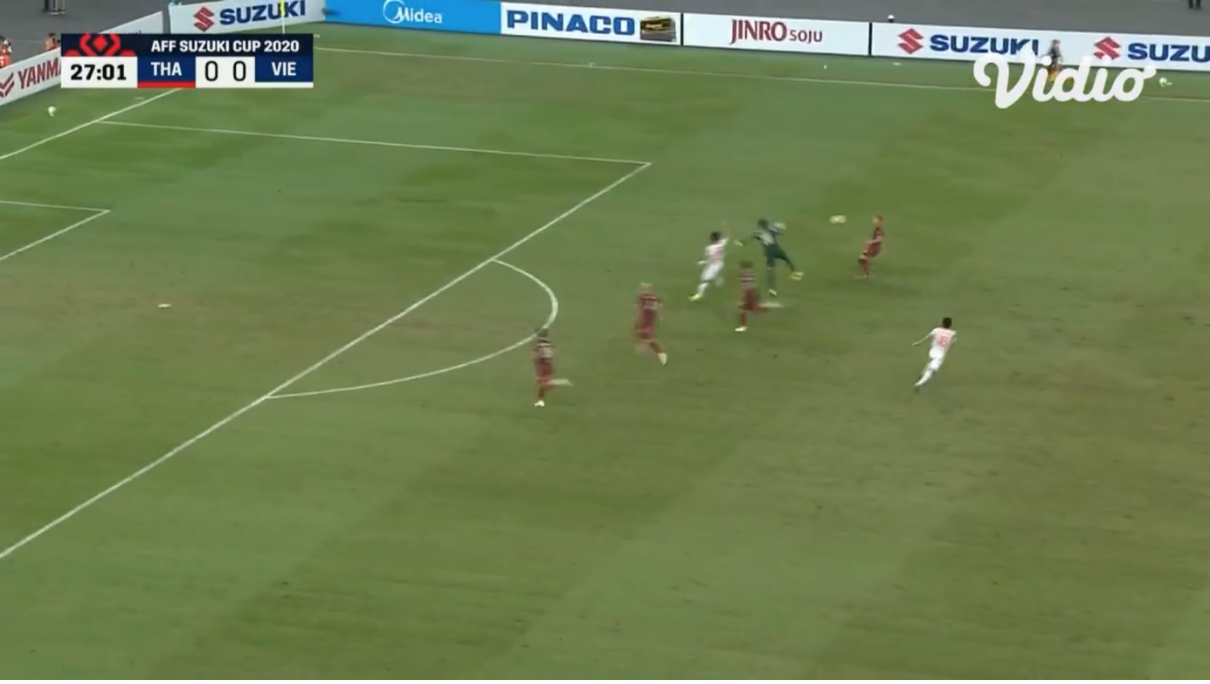 There were several times during the tournament when Thailand failed to get the ball back after losing the ball and the opponent was able to send the ball straight into the area behind their defensive line.

However, their goalkeeper was able to cover the space behind the high defensive line well, as seen in the above example against Vietnam. In summary, Thailand is able to anticipate this situation and prevent the opponent’s goalscoring opportunity.

At 45 years of age, Alexandre ‘Mano’ Pölking has proven capable of adopting a positional style of play that is both tactically and tactically entertaining. The coach’s faith and effort in developing an appealing and fulfilling model for this team have paid off, with Thailand winning the AFF Suzuki Cup and the players executing his ideas in stunning fashion.