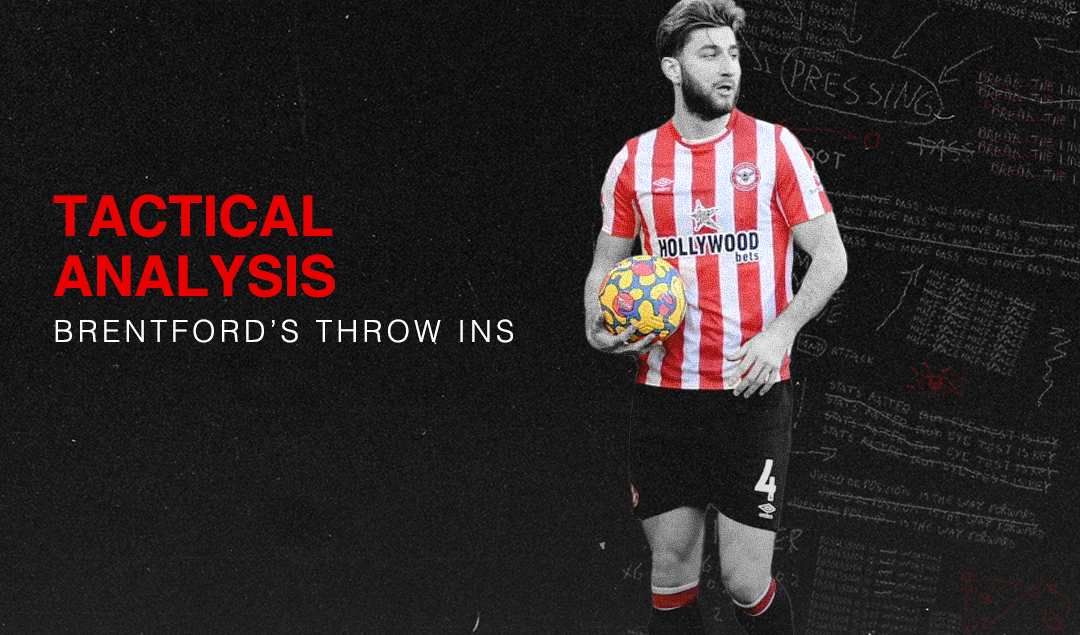 In their first season in the Premier League, Brentford have impressed with their direct, aggressive style of football which has seen them sit comfortably above the relegation zone. One rather unique aspect of their approach has been their use of long throw-ins. 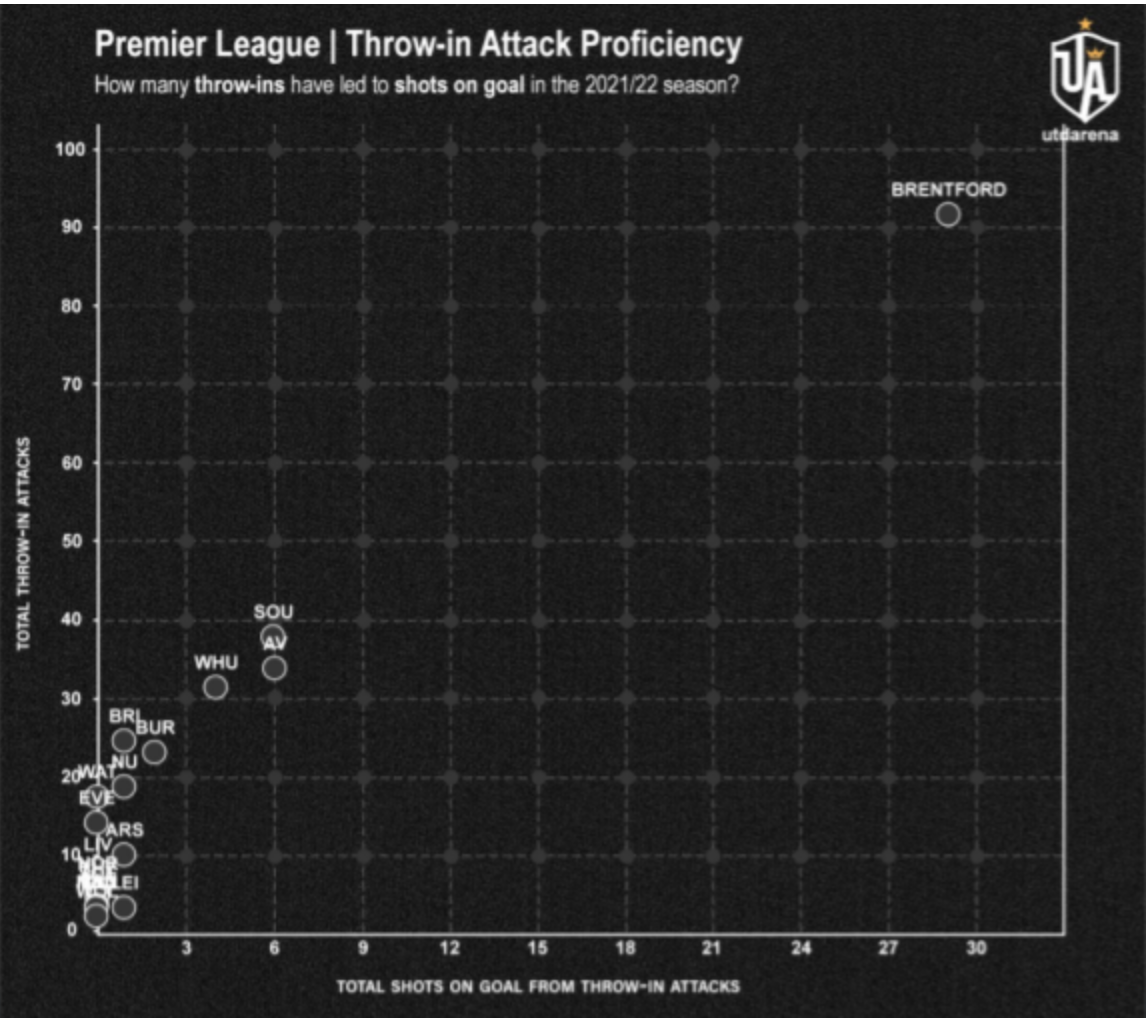 As this graphic from @utdarena on Twitter shows, Brentford are in a league of their own in their capacity to generate shots from throw-in situations.

Not since Tony Pulis’ Stoke City have a top-flight English team used the long-throw in as a permanent fixture of their set-piece artillery.

Although this ploy is often derided as a reductive way for defensive, physical teams to create chances, Brentford have been extremely astute in their setups and arrangements from these situations to maximize their attacking productivity and gain a competitive advantage over their opponents.

While their most common setup from long-throws involves crowding the penalty area with players as if they’re preparing for a corner, they also can use the strategy when taking the throw from deeper and committing fewer men in the box.

The above graphic (with Brentford in pink and the opposition in turquoise) demonstrates such a situation. The most noteworthy aspect of the throw is that it’s targeting an area where Brentford have a numerical disadvantage: only one Brentford player is in a position to attack the ball compared to two opposition players.

This seems counterintuitive, but in Ivan Toney especially, the Bees possess a scrappy, abrasive physical presence who is relentless in contesting aerial duels and can make this approach work.

By trusting in their aerially dominant players in this way, Brentford can exploit the fact that the opposition is committing more players to contesting the throw-in to better contest for the second ball and attack available spaces.

In this scenario, despite the opposition winning the first ball, we can see a Brentford player ready to attack the second ball.

Since they’re starting their run from deeper, they have time to build up momentum and gain an advantage in their aerial contest. We can also see another opposition player trying to assist their teammate in challenging for the second ball.

Since the opposition have committed so many players in the area where the throw was delivered, Brentford now have ample space and a free man to attack just outside the penalty area.

Once the second ball is won, Brentford have one of their players running directly at the opposition backline, with only one of the defenders able to step out and deal with the threat as the two other players in defensive positions are occupied with Brentford attackers.

By focusing more on trying to control space rather than outnumber their opponents from throw-ins, Brentford can compel them to cluster their players in specific areas and thereby leave space in other areas around the penalty area.

The trademark Brentford long-throw comes when they have a throw-in deep in the opposition half, where their launches into the box act like a corner.

In these situations, Brentford tend to keep at least three players stationed just outside the box to guard against counters. In the box, one player is tasked with disrupting the keeper while two players go to the front post.

Again, Brentford are outnumbered at the front post 3 vs 2 and the opposition have a further two players in the center of the six-yard box.

However, this means that they can use a runner from deeper in the box to exploit the space behind the opposition markers.

It’s clear that there are two pockets of space the Brentford player behind the six-yard box can exploit depending on the flight of the ball.

Such areas are left exposed because the opposition are being drawn to the flight of the ball, leaving too many players near the front post and deep in their own six-yard box.

As such, Brentford’s use of runners who can start from deep and then attack flick-ons and knock-downs with momentum can often be extremely effective.

In this particular case, Brentford were not able to win the front-post flick and make use of that movement, but the basic structure is clearly in place.

One interesting variation of this is when the player hindering the goalkeeper contests for the ball rather than simply blocking the keeper. 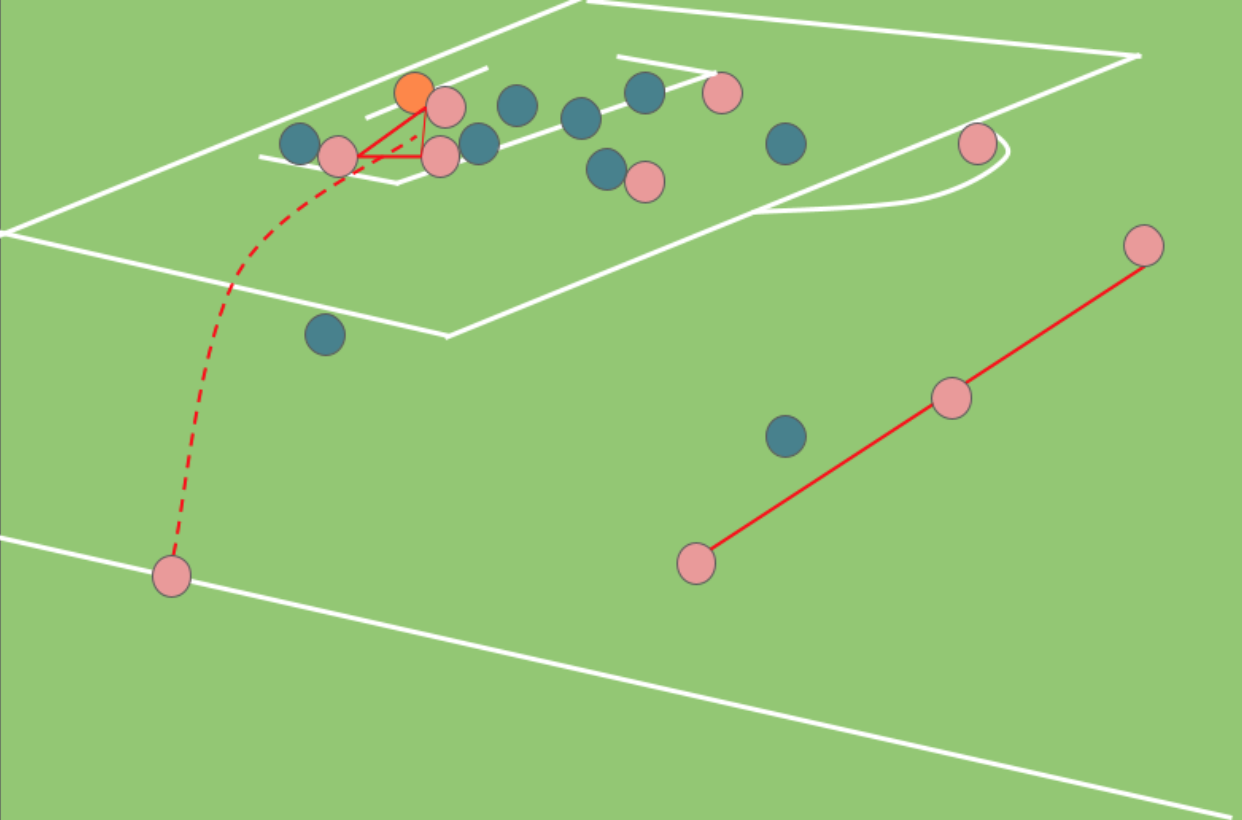 In this scenario, the Brentford players create a triangle at the front post.

While there are technically three opposition players plus the keeper to deal with this situation, the configuration of the Brentford players ensures that they are all in the interior of this triangle formation while the opposition is on the outside.

This means that if the delivery is right, Brentford are almost guaranteed to win the first ball without overcommitting men to the front post.

These slight variations in their setup enable Brentford to ensure they are unpredictable from their throw-ins while still maintaining their basic principles of forcing the opposition to overcommit and using deep runs to attack the second ball.

Perhaps the ultimate culmination of Brentford’s long-throw excellence came from their 2-1 victory over Arsenal during the opening match week of the campaign, with their second goal coming directly from a throw-in. 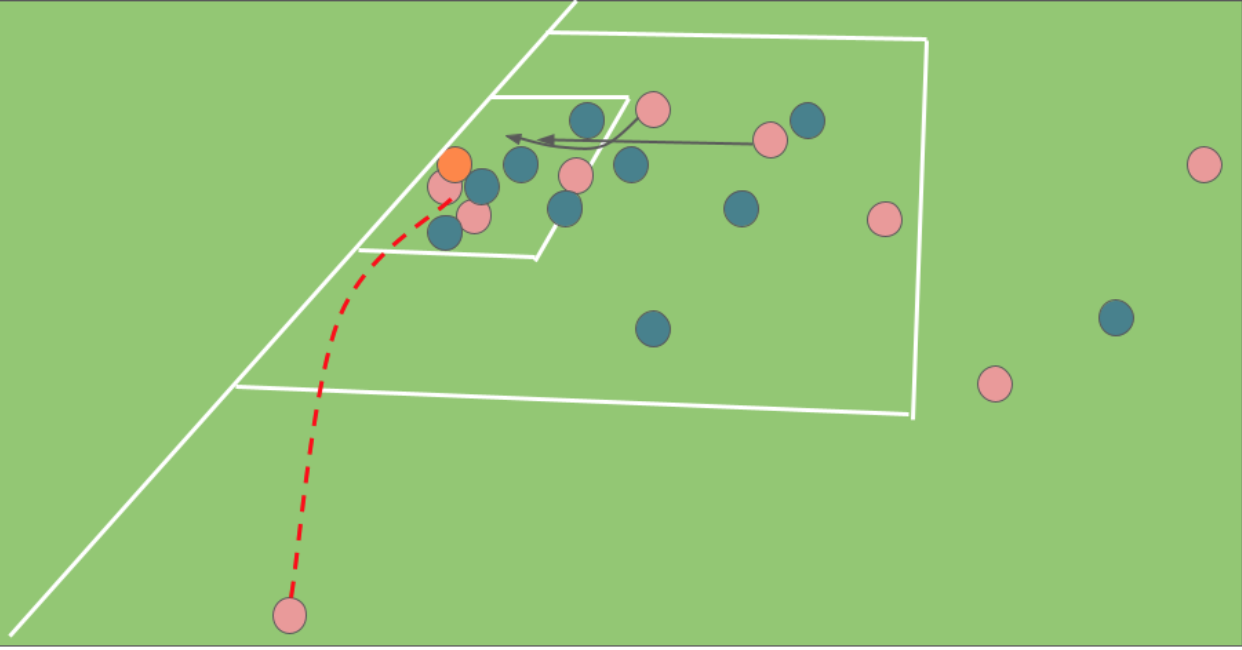 In this situation, the player marking the keeper and Ivan Toney were stationed at the front post.

Similar to the triangle shown in the previous diagram, their movement is such that no Arsenal player is in between them, meaning they have an easier time winning the duel despite having the same number of players as Arsenal at the front post.

Brentford have left two players behind the box with one player just inside the box but not making a forward run, ensuring they remain solid should possession be turned over.

The other players they have in the box make runs from deep to attack the back post, where there is available space due to Arsenal’s overcommitment in other areas.

It’s also worth noting there are pockets of space in the center of the six-yard box.

This, combined with the fact that Arsenal’s players in the middle of the box were stagnant, is one of the reasons why Toney’s knockdown from the initial throw is able to bounce before being attacked at the back post.

Through exploiting opposition teams’ tendency to overcommit players towards the flight of the ball and then positioning players to make well-timed runs to attack second balls, Brentford have effectively converted what for many teams is a relatively useless situation into a limited yet useful aspect of their attacking weaponry.

It’s unfair to characterize them as simply using brute force and muscle in these scenarios. In fact, how they contest aerial duels is not the most important aspect of their strategy.

Instead, it’s the movement around the duel and the way they force the opposition to stack players in one area before quickly moving it to another that makes this an effective tool.

They’re also able to make slight tweaks to their setup based on the opposition, a level of detail that undoubtedly comes from having a devoted throw-in coach.

While it may not be one of the main reasons they’ll be in the Premier League next season, Brentford have been able to find a marginal advantage over their contemporaries through long throw-ins, making them a tougher team to beat throughout the course of the season.