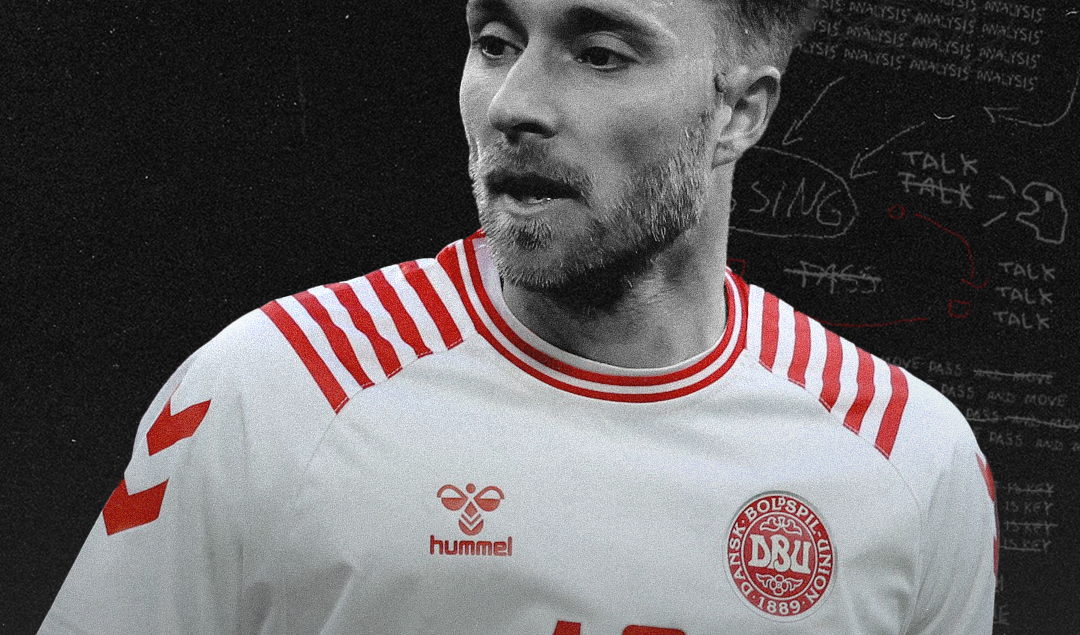 Hummel and Denmark are synonymous with each other. The sportswear brand and national team started off their relationship in 1979 and ran until 2004, before German giants Adidas took over, but 2016, after 12 years away, Hummel made a return, starting a second deal that would run until 2024, exciting fans as their first tenure had made some historic shirts that can still be seen whenever Denmark play at major international tournaments.

Hummel, who originate from Denmark and are based in Aarhus, the country’s second-largest city, are one of the oldest sportswear brands in the world and in football, they’ve manufactured kits for some of the game’s great clubs including Real Madrid, Benfica, Tottenham, Aston Villa and Everton.

However, it is their kits for the Danish national team that have been most popular, with their eccentric designs and uniqueness creating an everlasting legacy and kits that are still popular to this day.

For Hummel’s Chief Executive Officer, Allan Vad Nielsen – who has been in charge since 2017 – the connection between the company and country is a matter of pride. Hummel are a Danish brand and for them, the relationship is meant to be, and Nielsen wants to ensure they are working together for a really long time.

“In terms of our Danish heritage and our relationship with DBU (Dansk Boldspil-Union, the Danish Football Union), we are often associated with the Danish national football teams,” Nielsen says. “We designed the shirts in DBU’s absolute golden age in the late 1980s and early ‘90s and we have been together for ups and downs.

There’s no doubt that we’re extremely proud of sharing the Danish national football team with the whole of Denmark and we can’t wait to share even more experiences with both players, coaches and not least fans in the future.”

It was Denmark’s first World Cup appearance that put Hummel on the map. The summer of 1986 had plenty of talking points. From a successful World Cup hosting by Mexico where the brilliant fans were passionate, to the flair and finesse of Diego Maradona – the star of that tournament – to the unpredictable nature of the tournament rounded up by a thrilling final, it was an eventful competition, filled with many stories and much to celebrate.

The kits were up the mark as well, as Le Coq Sportif worked up a wonder for champions Argentina, Adidas took it up a level with the red of Belgium and green of hosts, Mexico, while Umbro made some stunning designs for the two United Kingdom representatives: England and Scotland.

Hummel, however, stole the show. They made an iconic shirt for Denmark: a half-and-half – one half with plain Danish red on the left side on which the DBU crest was placed, and on the other half with red and white pinstripes. Those were accompanied by the famous Hummel chevron, running down the shoulders and arms.

It would become a shirt for the ages and was praised the world over. Owning one of those is now a piece of history, with many still hoping to grab one.

Hummel still attempt to reinvent those shirts for the current Danish generation and for Euro 2020, they made a special third shirt, depicting it in all red, and it was worn in their semi-final defeat to England at Wembley Stadium.

Nielsen believes it’s Hummel’s finest work and its popularity is still soaring to this day, almost 36 years since it was first released: “There’s is no doubt that we’re extremely proud of the Denmark 1986 shirt, which have become of the most iconic football shirts of all time.

For the last couple of years, we’ve launched several replicas of the shirt and each time it was sold out for less than 24 hours. That shows how popular and iconic this shirt is – not just in Denmark, but in the entire world.”

Football in the Eye of the Storm: The Beirut Derby

The World Cup shirt’s fame gave Hummel more credibility in football. Soon after in 1988, Real Madrid struck a historic deal with them to make the company their kit sponsor.

At the time, Los Blancos were dominating the Spanish domestic scene, having won five LaLiga titles between 1986 and 1990. Hummel became a part of that success, as Real Madrid’s star names donned their shirts, while they bagged a separate deal with their top scorer, Emilio Butragueño.

A World Cup can elevate a sportswear brand. Think back to Adidas in 1990 with Germany, Lotto with Croatia in 1998, Levi’s with Mexico in 1978 or Puma with Cameroon in 2002. Was 1986 as beneficial to Hummel as it was to the Danish national team?

There’s nothing like a national football team that can unite a union and being a part of the journey with DBU has in no doubt helped Hummel to grow as a brand in Denmark.”

After the 1986 World Cup where Denmark reach the knockout rounds of the tournament before falling to Spain, expectations were high that the country would have a bright footballing future. They failed to qualify for the 1990 tournament, but, with some luck, made it to the European Championships of 1992, held in nearby Sweden.

The Mercurial Talents of Jean-Pierre Papin, a Forward of the Highest Quality

The Danes, rather surprisingly, went all the way, and with that came another era of bright, iconic shirts. Once again, the famous red was accompanied by white on the shoulders, and those shirts were adorned as they beat Germany in the final.

What did Hummel do to boost Denmark for that tournament and create another kit for generations? Nielsen: “To be honest, we weren’t reinventing ourselves in the 1990s. We were just doing what we love the most: designing football shirts.

It’s always different to predict which shirts that’ll become iconic and often it comes down to the performance on the pitch. I’m pretty sure that no matter how the shirt had looked in 1992, it would become iconic because of the beautiful story around the Danish national team.”

So what do Hummel try to portray for their kits for Denmark? Over the years, we’ve seen Denmark have players with great technical qualities, such as Michael and Brian Laudrup, Preben Elkjær and more recently, Christian Eriksen.

The general feeling would be that Danish kits require a bit of flamboyance to showcase these gifted players even better. However, Nielsen thinks differently. He believes the fans are the first priority. The Danish shirts must be accepting of its supporters, as tey have the biggest say in the sport.

“We love football, but we also believe that football is much more than the players on the pitch,” Nielsen says. “It’s the thousands of fans in and outside the stadium. It’s the surrounding society in which the football community has a role to play. And that’s exactly what we’re trying to express with our kit designs.”

“Through the kit design we want to share the national team with the whole of Denmark. Of course, we hope that the players like the kit, but in the end it all comes down to the fans. That’s also why, we’re always focusing on the fans in our design process.”

Recent years have seen Denmark qualify for international tournaments more frequently. In the past decade, the men’s national team participated in the 2010 and 2018 World Cups, reaching the second round in the latter, while maintaining a near-impeccable record in qualification for the 2022 tournament. On the European scene, they qualified for Euro 2012 and reached the semi-finals of Euro 2020, playing with fearlessness and grit in adversity.

Hummel joined them for their adventures in Russia in 2018 as well as the pan-European tournament in 2021. The shirt for Euro 2020 exhibited their message that the fans come first.

On the shirts for both home and away kits, there was a sound wave graphic of the noise from Copenhagen’s Parken Stadium, when the home crowd are singing for their country ahead of a match between Denmark and Ireland in June 2019. Inside the shirt, the words “Der er et yndigt land” is inscribed – “This is a lovely country,” it says.

“As mentioned earlier, we’re always trying to tell a story through our kit designs,” Nielsen says. “And we’re always putting the fans first. The same goes for the 2018 World Cup and Euro 2020. And especially the Euro 2020 shirt is designed with a quite unique fan story.

Because we took the roar from thousands of fans gathered at Parken Stadium all signing the Danish National Anthem and transformed it into a sound wave that was subsequently weaved into the fabric used to make the new shirt. All of this to create a unique shirt together with the fans.”

For the long run, the focus is the same. Hummel will continue designing with the fans at the forefront of their thoughts. There’s a deal in place that ties Hummel with the Danish Football Association until 2024, and there’s every chance that could be extended. Until then and possibly beyond, Hummel want their kits to exude unity and pride.

Nielsen: “We’re in contact with the DBU’s commercial and sporting department on a weekly basis where we’re discussing our future activations and campaigns around the Danish national teams. They know exactly what’s going on inside the union and that’s also why they often have inputs for both future kits and activations.”

He continues: “We’ll keep designing shirts for the fans. Because we believe that the Danish national team is all about unity. We feel connected to the players on the pitch. And we express our own identity through our support of them.

When they win, we win. When they lose, we lose. And perhaps nothing shows this better than the humble football shirts. That’s why we’ll keep designing kits for the Danish fans.”

Hummel have produced some of the game’s most iconic shirts for the Danish national teams, ranging all the way from the senior men’s and women’s sides to the youth teams.

From 1979 until today with a break in between, they’ve changed and influenced the game with special kit designs and distinct shirts. This is a special relationship, and their legacy will undoubtedly be evident for decades to come.