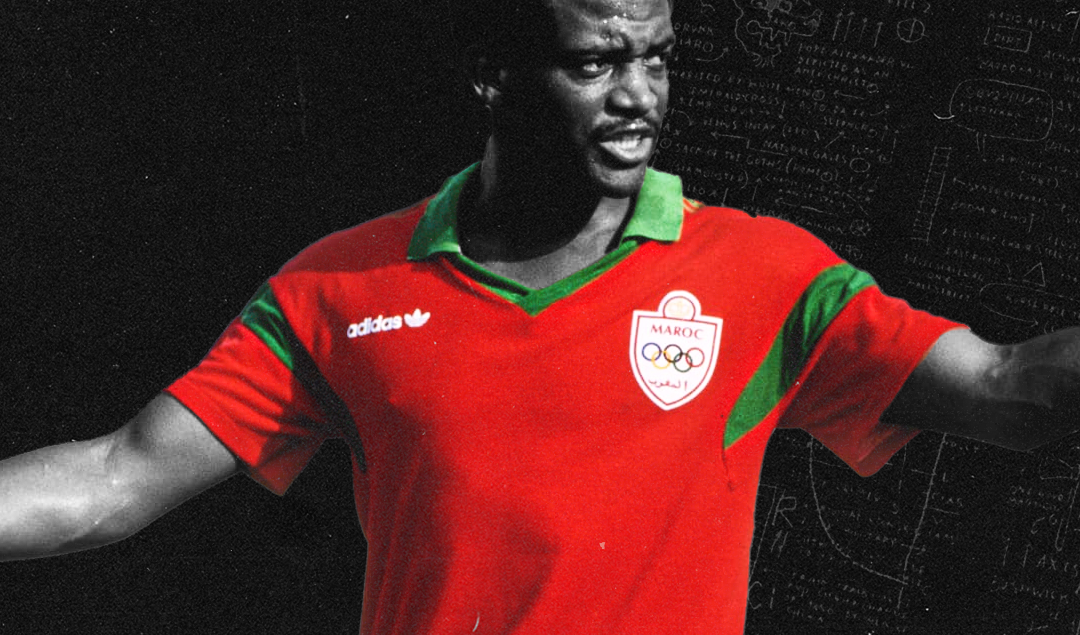 When football fans think of African success stories in the World Cup, many look towards Cameroon in Italia ’90 and Ghana in South Africa ’10. Some would think the Indomitable Lions in 1990 were the first African side to reach the World Cup knockout stages. That is not the case, for such an honour was achieved four years earlier.

When Brazilian José Faria took over as Morocco’s manager in 1983, he was already well-versed in Moroccan football, having previously coached FAR Rabat in tandem with the national job. Arriving after the Atlas Lions failed to qualify for the 1984 African Cup Of Nations, Faria’s primary focus was to qualify for the 1986 World Cup in Mexico.

Qualification proved a surprisingly smooth process, as Morocco overcame Sierra Leone, Malawi, Egypt and Libya in two-legged ties to reach their first World Cup for 16 years. But while qualifying was smooth for the Atlas Lions, the draw for the World Cup group stages pitted them against difficult opponents. Drawn in Group F, Morocco faced England, Poland and Portugal.

Despite the pedigree of the opposition, Morocco felt they could compete and weren’t there to simply make up the numbers. Finishing fourth in the 1986 African Cup of Nations in March proved a good barometer of where Morocco was at just a few months before the World Cup.

Furthermore, it helped Faria pick his 22-man squad for the tournament in Mexico, comprised mostly of players from the Moroccan top flight, with just five of the squad playing their football in Europe. A significant portion of the squad consisted of those who played under Faria in the 1984 Olympics.

While Zaki provided steady presence and leadership in goal, it was Timoumi who was the golden boy of the Atlas Lions, winning African Footballer Of The Year in 1985. Faria coached Timoumi at FAR Rabat and had gotten the best out of the midfielder the previous year when FAR Rabat won the African Cup Of Champions Clubs – the precursor to the African Champions League.

Faria meticulously prepared his squad for the climate in Mexico, spending 40 days in Monterrey and playing friendlies against local teams. Such fine-tuning had the Atlas Lions prepared for their opening game against Poland on June 2.

The Poles were nearing the end of their famed golden generation that had led them to third in 1974 and the semi finals in 1982. Nevertheless, Poland still had several players with World Cup experience like captain Zbigniew Boniek, goalkeeper Józef Młynarczyk, centre backs Władysław Żmuda (in his fourth World Cup) along with Roman Wójcicki and forward Włodzimierz Smolarek.

With Faria playing two up front in Krimau and Merry, the Moroccans kept Poland’s centre backs occupied. Timoumi’s creativity was at the centre of a few half chances in the first half, as he his capabilities from long range, a free kick and a long rasping shot keeping Młynarczyk on his toes.

Poland substitute Jan Urban went close on two occasions, Zaki adeptly clawing away his curling shot, Urban getting closer when hitting the post from long range after intercepting Dolmy’s lax pass. A goalless draw in the opening game of a World Cup was no setback for the Atlas Lions, a point better than losing a game that would put a team already onto the back foot.

That is what faced England, Morocco’s next opponents on June 6th, already under pressure from fans and the press after losing 1-0 to Portugal in their opening game. It was a case of the unknown for Morocco and England, with both sides never facing each other before in an international match. Faria decided to go for a more attacking line by playing 4-3-3 – Khairi coming in for midfielder El Haddaoui.

The first half was one of relatively few chances apart from Zaki saving well from Gary Lineker. Yet the game sprung into life a few minutes before half time when England went down to 10 men. Ray Wilkins was sent off for throwing the ball at Paraguayan referee Gabriel González.

Despite having a man advantage, it was England that had most of the half chances, though they failed to create any opportunities to severely test Morocco. The Atlas Lions were content to hold on for a point, as two points from two games against established European opposition represented a decent return.

Poland’s 1-0 win against Portugal meant Morocco’s final group game against the Portuguese was a winner-takes-all scenario if now bottom-placed England could manage to take three points from table-toppers Poland.

Portugal in 2nd place may have been above Morocco, but their World Cup so far had been turbulent. Under manager José Torres, they were a shadow of the side that reached the 1984 European Championship final. Multiple internal issues had stemmed from the Saltillo Affair while preparing for the competition, with players going on strike and demanding that their bonus payments be increased or go on strike.

Certain compromises between the squad and Portuguese Football Federation (FPF) led to Portugal beating England in their opener. However, disaster struck when captain Manuel Bento broke his leg in training. Internal issues further plagued the side by Torres deciding to strike a balance by equally utilising players among Portugal’s “Big Three” of FC Porto, Benfica and Sporting. It led to genuinely good players who deserved a starting spot on merit like Paulo Futre to settle for the bench.

Faria had reverted his team back to 4-4-2 though with Mustafa Merry dropped in place of El Haddaoui and Khairi partnering Krimau up front. Morocco’s growing confidence after impressing against Poland and England meant the events of June 11th would live long in African football history.

The Atlas Lions did not take long to impose themselves onto the brittle Portuguese with Aziz Bouderbala having two long-range efforts narrowly wide of the post. Their enterprising start would pay dividends in the 19th minute.

Cutting inside from the right, Haddaoui lofted the ball into the box with the outside of the boot, only for it to be cleared away by a Portuguese defender. The ball came to Jaime Pacheco who played a lazy square pass to Khairi.

Taking two touches with his right foot, Khairi then struck the ball with his left foot towards goal from 20 yards rifled past Bento’s replacement Vítor Damas into the bottom corner. It was Morocco’s first goal of the tournament and they doubled their tally seven minutes later.

Receiving a cross field ball on the right deep into Portugal’s half, Krimau was tightly shadowed by his marker, forcing him to play the ball back to Labid Khalifa. The defender instantly whipped the ball deep into the box. It swung past the Portuguese defenders and Moroccan players in the box, all looking at the ball, everyone apart from Khairi. No one had spotted the run of the FAR Rabat forward, who was in position at the far post to smash a fierce volley past Damas.

Completely stunned at going two goals down in less than 30 minutes, Morocco held the initiative and weathered Portugal’s attacks. The Atlas Lions would go in for the kill on 62 minutes, as excellent build play resulted in nine interrupted passes from Zaki playing the ball to Abdelmajid Lamriss and Timoumi playing the killer pass to Krimau who made it 3-0.

Portugal went on to score a meaningless consolation goal on 80 minutes through the substitute Diamantino. The sound of the final whistle heralded a milestone for African football, as Morocco became the first African country to reach the World Cup knockout stages. Furthermore, they did so as group winners, thanks to England beating Poland 3-0.

Portugal may have been wracked with internal issues yet Morocco’s commanding performance had impressed many that had dismissed their chances at the start of the tournament. So what was the success of their topping the group stages? Unfamiliarity played its part, according to El Haddouadi when speaking to FIFA.com in June 2016:

“We were at an advantage, as we knew their players, while they did not know us very well. In those times, it was quite difficult to get information about other teams.”

With most of Morocco’s squad playing in their domestic league, the only footage available to scouts were the recent African Cup Of Nations and 1984 Olympics. Footage from the Moroccan league wouldn’t be as accessible as it would be today. It was easier to collate footage when garnering information on Poland, Portugal and England. Their players featured prominently in domestic leagues at home, in other European leagues and continental tournaments like the European Cup or UEFA Cup.

Unluckily for the Atlas Lions, their reward for topping Group F was to face West Germany in the last 16. One of the tournament favourites, their form in the group stage had not lived up to their reputation, drawing to Uruguay, narrowly beating Scotland and beaten by Denmark to finish second.

Played under the sweltering heat of Monterrey on the 17th June, Morocco matched their illustrious opponents. That was until the 87th minute when the Atlas Lions conceded a free kick from long range. Taken by Lothar Matthäus, his strike bounced along the ground and into the bottom corner past the despairing hand of Zaki. It was a cruel way to be knocked out of the tournament for Morocco.

Despite such heartbreak, the Atlas Lions had showcased Africa’s progress in world football by reaching the knockout stages. The national team were feted as heroes when returning home, rewarded with a parade attended by up to 100,000 people. Moreover, several players got big moves as a result of their efforts in Mexico.

Zaki, awarded African Footballer Of The Year for 1986, moved to Spanish club Real Mallorca where he stayed for six years. Timoumi would also move to Spain after the World Cup, heading to newly promoted La Liga club Real Murcia, but would last just a season in Spain. José Faria would coach Morocco for a further two years and, such was his love of the country, later converted to Islam.

Morocco have not been able to replicate the success Faria had in 1986 – reaching three World Cups since then and crashing out of the group stages in each one. It is why their exploits in Mexico 34 years ago are so fondly remembered by Moroccans.

Though Cameroon’s journey to the quarter finals in 1990 is the high water mark for African football, Morocco will always be known as the first team to break the ceiling for African football at the World Cup. And that is something that can never be taken away.