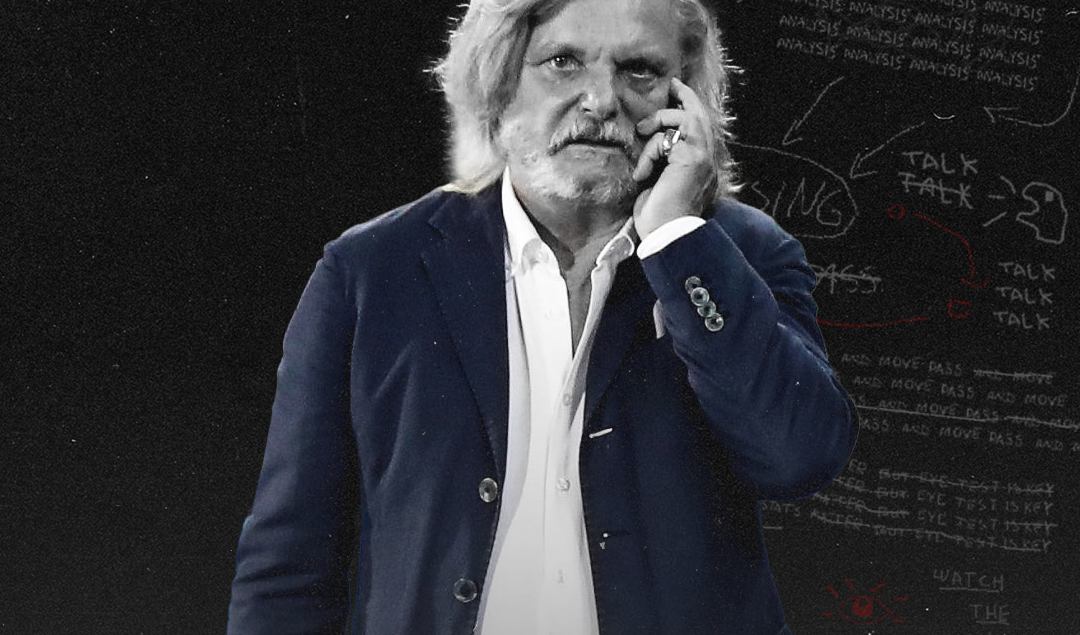 After seven years as president of Sampdoria, Massimo Ferrero has been forced to resign. The eccentric 70-year-old was arrested on December 6 for financial activities unrelated to the Blucerchiati, and the club released a statement later that day, confirming that he was stepping down.

His time at Sampdoria will be looked upon with disdain by supporters of the Italian club. Despite his energy and charismatic personality, he offered fans false hope and reports of his financial situation often featured in the Italian press.

Ferrero acquired the club for free in June 2014 from Edoardo Garrone and inherited €15 million worth of debts that the club had accumulated. The Rome native came from a background of film production like his Napoli counterpart Aurelio De Laurentiis and it seemed that he was willing to boost the image of Sampdoria as well as make the club competitive.

The first season under his presidency was the 2014/15 campaign and Il Doria had an excellent start of the campaign. Coach Siniša Mihajlović created a defensively solid and hard-working team that was positioned as high as third place in the Serie A table by the Christmas break.

Mihajlović had the luxury of rotating Sergio Romero and Emiliano Viviano in goal; a solid center-back pairing of Matías Silvestre and Alessio Romagnoli, an excellent ball-winner in midfield in Pedro Obiang; Roberto Soriano created play and made late runs into the penalty area; and Manolo Gabbiadini, Stefano Okaka, and Éder were a dangerous attacking trident.

With Romero refusing to sign a new contract, Viviano became the first-choice goalkeeper, and Mihajlović had to change his formation to the 4-3-1-2 with Eto’o as an attacking midfielder. Sampdoria eventually finished in seventh place at the end of the 2014/15 Serie A season and only qualified for the Europa League due to city rivals Genoa, who finished sixth, not obtaining a UEFA license.

Despite the decline in the second half of the season, Sampdoria had a respectable league campaign. Off the field, Ferrero was making headlines too. He appeared regularly on a variety of Italian television programs but he had also made derogatory comments on then-Inter president Erick Thohir.

He had advised former Nerazzurri patron Massimo Moratti to “hunt that Filipino down”. Ferrero later apologized to the Indonesian businessman but was given a three-month ban before getting that sentence overturned on appeal.

It was also in 2014 that Ferrero was sentenced to one year and 10 months in jail with the rite of a plea bargain for his involvement in the fraudulent bankruptcy of Italian airline Livingston Energy Flight.

The Sweetest Scudetto Of Them All: Sampdoria’s 1990/91 Season

The 2015/16 campaign was a season to forget for Sampdoria. The Blucerchiati were eliminated from the final qualifying round of the Europa League by Serbian club Vojvodina 4-2 on aggregate, which included a 4-0 defeat in Turin due to the Stadio Luigi Ferraris in Genoa not meeting UEFA standards, and they finished 15th in Serie A, just two points above the relegation zone.

Walter Zenga had replaced Mihajlović – who was appointed by AC Milan – as coach but he was eventually replaced by Vincenzo Montella in November 2015. While Zenga had tried a number of back four formations, Montella implemented the 3-5-2 and the Blucerchiati played a low-tempo, possession-based style of football.

In the middle of the 2015/16 season, Ferrero sold Éder to Inter after he had scored 12 goals in the first half of the Serie A campaign and the Italo-Brazilian was second at the time to eventual leading goalscorer Gonzalo Higuain of Napoli on the goalscoring chart. To replace Éder, Ferrero brought in Fabio Quagliarella on loan from Torino in February 2016 and he was eventually bought outright in the summer for €2.75 million.

From 2016 until 2019, Sampdoria was coached by Marco Giampaolo. The Swiss-born tactician was a journeyman coach but an impressive mid-table finish with Empoli in 2015/16 got his coaching career back on track.

During his time in Liguria, the Blucerchiati never finished higher than ninth, but it seemed that the squad could not sustain the energy required to implement his high-tempo possession football. Although Il Doria would put themselves in Europa League contention, their form would deteriorate in the second half of each season.

Giampaolo’s Sampdoria was one of the most entertaining teams in Italian football and Quagliarella was in the form of his life at an age when others would be at the twilight of their careers. At the age of 36, Quagliarella was crowned the Capocannoniere of Serie A after scoring 26 goals in the 2018/19 season.

Unfortunately for Giampaolo, Ferrero had to constantly sell the club’s best players for substantial profits to keep the club afloat. Defenders like Joachim Andersen and Milan Škriniar; midfielders like Lucas Torreira, Dennis Praet, and Bruno Fernandes; and forwards like Muriel, Patrik Schick, and Duván Zapata could not remain in Liguria and moved to bigger or more ambitious clubs.

Throughout the calendar year of 2019, multiple reports suggested that Ferrero was going to be sold to Jamie Dinan of the American investment fund York Capital Management and that club legend Gianluca Vialli was going to be appointed as president. Despite the reports suggesting that a deal had been completed, no official statement was released by the club and the deal was scrapped in October.

For the 2019/20 season, Eusebio Di Francesco replaced Giampaolo, who went to AC Milan like Mihajlović and Montella before him, but he only lasted seven rounds after registering just one win in charge. Claudio Ranieri was brought in to replace him and the former Chelsea and Leicester City manager lifted the Blucerchiati off the bottom and achieved safety.

Ranieri remained with the club for the 2020/21 season and Sampdoria went on to finish ninth in Serie A. Despite securing mid-table safety, Ferrero and the experienced tactician could not agree on a new contract so the coach decided to leave, and he was replaced by former Parma tactician Roberto D’Aversa. In the last two seasons, Ferrero has not been able to sell players like he used to, in part due to the COVID-19 pandemic.

Sampdoria has acquired experienced players like Japanese defender Maya Yoshida, Italian winger Antonio Candreva, Portuguese midfielder Adrien Silva, and Italian forward Francesco Caputo, but there aren’t many players that it can sell for a profit. Danish starlet Mikkel Damsgaard starred for Denmark at Euro 2020 but he remained at the club and Czech winger Jakub Jankto was bought by Spanish club Getafe for a paltry €6 million.

The frugal spending has increased the fury of Blucerchiati fans but that is not all. Ferrero often declared his love for his hometown club Roma and often voiced a desire to purchase the Giallorossi, and he also had intentions to buy Palermo as well.

His frequent ramblings about Roma made Samp fans well that he had little care in the Ligurian club and has only increased their desire to see Vialli make a romantic return. Although Il Doria had their heyday from the mid-1980s to the mid-1990s, Ferrero ridiculously claimed that Samp were only known within Liguria before his arrival and he made the club famous around the world.

In addition to the charges regarding the bankruptcy of Livingston Energy Flight, Italian press reports would throw the figure of €50 million around to suggest that was the amount of debt Sampdoria had, and he also had a number of assets seized, including an apartment in Rome. It was also rumored that he pocketed about €1 million from the transfer of Pedro Obiang to West Ham United in 2015.

News of Ferrero’s arrest on December 2016 was met with joy and relief by Blucerchiati fans. No longer would their club be run by a man with a scruffy beard and hairstyle as well as a volatile personality. No longer would Samp fans have to deal with news about a president with constant financial issues.

The Public Prosecutor’s Office of the Republic of Paola in Calabria, Italy is conducting an investigation about alleged corporate crimes and bankruptcy, which aren’t related to the club. With Ferrero stepping down, it also means that Sampdoria won’t be touched and not be penalized for their former president’s financial activities outside of football.

According to an official statement released by Sampdoria:

“These events are entirely independent of both the management and ownership of the Sampdoria and the Roman activities of Ferrero related to the world of cinema.

“However, to protect the interests of the other activities in which he operates, and, specifically, to avoid any speculation regarding Sampdoria and the world of football, Ferrero intends to formalize the immediate resignation from social positions.”

Massimo Ferrero was often seen at the crowd at Sampdoria games, jumping up and down, praying, waving scarves and handkerchiefs, and shouting, but those days and nights of him acting theatrically in public are gone. He is currently incarcerated in the San Vittore jail in Milan for his alleged crimes.

Although it is unclear who will eventually take over Sampdoria, Blucerchiati fans will be glad that Ferrero is confined to the history books of the club.