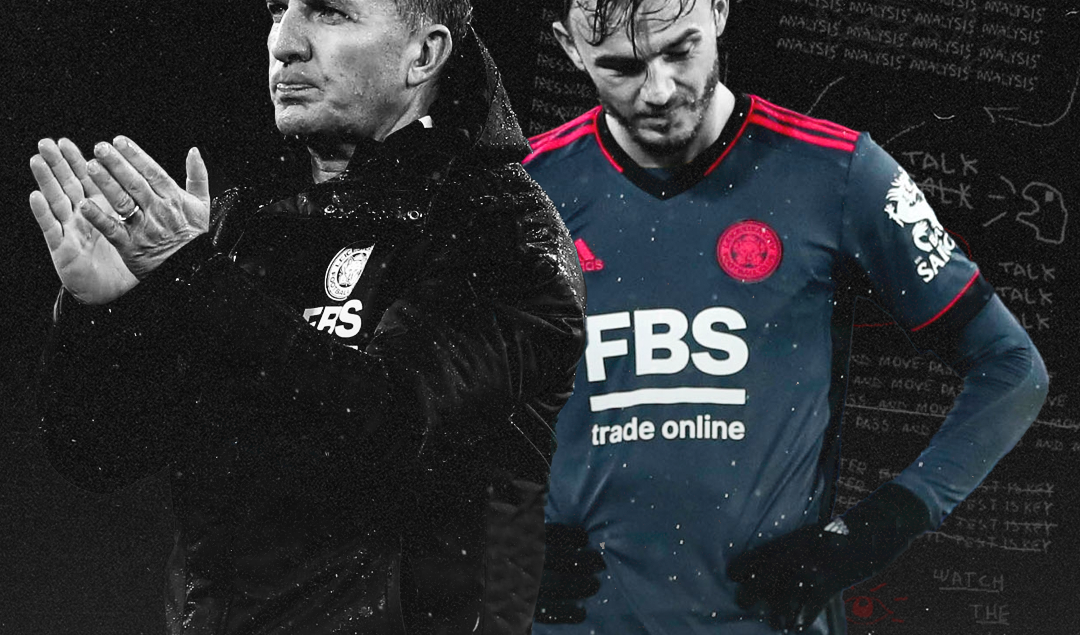 Football is a relatively simple sport; it’s why it’s so revered around the world. After all, all you need to be able to play the beautiful game is an object to kick, a handful of other competitors, and some markings that vaguely hint at where the goals should be. Jumpers, if you will.

That said, football has been honed and mastered as a craft over the course of the last century. It is now highly advanced and features some of the world’s best athletes and brightest minds. And although the game is still played at its simplest level on every corner of the globe, there is a universe of difference between how football works on Hackney Marshes and at the Etihad Stadium.

Regardless, we speak and think about all kinds of football in the same way. If an amateur team conceded 17 set-piece goals in as many games, they would be called soft. An identical conclusion would be drawn if the fact applied to a Premier League club.

And, amid a precipitous decline under Brendan Rodgers, softness just so happens to be a term that accurately describes Leicester City. After a bright start to the Northern Irishman’s tenure in the East Midlands, things are starting to turn south for the Foxes. Here’s why.

In February 2019, Rodgers arrived at the King Power Stadium having repaired the reputational damage he suffered at the end of his reign in Liverpool. He did so by leading Celtic to the first double treble in Scottish footballing history, a feat that also included a 69-game unbeaten run.

Although Rodgers was unable to deliver Celtic success on the European stage, his domestic record spoke for itself and was enough to win him a seat back in the Premier League with Leicester. He took over from Claude Puel, who had become a toxic figure due to his defensive style of play, with the club eight points above the relegation zone and on a downward spiral.

Despite losing his first game in charge, Rodgers helped Leicester rebound to end the year. The Foxes won four straight as March turned into April and closed out the season with positive performances (if not results) versus Arsenal, Manchester City, and Chelsea.

Rodgers’ early impact at Leicester was based on his flair for man-management and ability to revive a flatlining attack. He continued to have the same influence through the following two seasons, with the Foxes finishing fifth in the Premier League twice in a row before hoisting the FA Cup.

However, Rodgers’ Foxes had gained a reputation for ending seasons poorly by the time they celebrated under Wembley’s arch. Twice they could’ve qualified for the Champions League, twice they failed to make good on their promise.

Were the cracks already starting to show?

This season has been difficult for Leicester. Injuries have decimated Rodgers’ squad, leaving the Foxes exposed at home and eliminated from the Europa League. Most of the team’s issues have stemmed from their softness in defence, with Leicester allowing 17 set-piece goals through their opening 17 games of the Premier League season.

For much of the campaign, Rodgers’ side have taken a zonal approach to defending dead-ball situations. Prior to Leicester’s 1-0 upset of Liverpool, the Foxes’ most effective aerial forces would line up on the edge of the six-yard box with smaller players instructed to mark one-v-one.

Against Manchester City, this left Aymeric Laporte and Ruben Dias up against Kelechi Iheanacho and Hamza Choudhury. The Citizens scored twice as a result, condemning Leicester to a 6-3 drubbing on the road.

Kasper Schmeichel, who turned 35 in November, is amongst the Foxes’ biggest underperformers this season, with his advanced analytics falling below their usual standards. The Dane conceded 5.3 more goals than expected through the first half of the campaign when the quality of the shots he faced (measured by PSxG) were accounted for.

Schmeichel’s willingness to engage in the play outside his penalty area has also fallen over the past 365 days. Amongst goalkeepers from Europe’s big five leagues, the Dane ranks in the 14th percentile for the average distance of his defensive actions from goal. In other words, Schmeichel – though never an active sweeper – is doing less sweeping than ever before.

However, structural forces are at play.

As noted by BTL colleague Alex Barker, Leicester’s opponents are touching the ball in the attacking penalty area much more often than last season (up roughly 40%), with a similar trend spotted in the defensive third.

To put it differently, Rodgers’ side have been forced to defend more often (and in deeper positions) in 2021/22 than was previously the case. But, after their shock win over Liverpool, could the tides be turning?

Will Leicester Bounce Back?

Suspensions, too, have played a role. Ayoze Perez’ three-game ban (for an illegal challenge on Pablo Fornals) made Leicester’s start to the season bumpier than it had to be, with the underperformance of key players – most notably Çağlar Söyüncü – leaving Rodgers stuck between a rock and hard place.

That said, it’s a manager’s job to deal with the cards they are dealt – and Rodgers has looked rattled this year, an emotion that has often boiled over onto the pitch.

Breaking Down the 4 -4 -2 Mid-Block: Analysing Leicester City’s Possession Play against Villarreal’s Mid-Block in the Pre -Season

Even in the Foxes’ much-heralded win over Liverpool on 28 December, there was a nervous energy to Leicester’s play. Rodgers’ side sat in a deep, narrow block for most of the game, allowing the travelling side to control the bulk of possession.

Leicester’s lack of width saw Jurgen Klopp make adjustments of his own, repositioning Jordan Henderson to the right in an effort to unclog the centre of the pitch. Although Liverpool were kept off the scoresheet, the change was effective as it allowed the visitors to play at a higher tempo.

The Reds’ control of the match saw them create significant chances, with Sadio Mane shooting over the bar and Mohamed Salah twice stopped by Schmeichel. On another day, Liverpool would’ve ended the day on the scoresheet.

In other words, poor finishing from the visitors and good goalkeeping by Schmeichel played a significant role in Leicester’s win.

The Foxes, though scrambly and nervous at times against Liverpool, did defend set-pieces well. Rodgers’ side marked the Reds man-to-man at corners and performed admirably, a key achievement given their poor defensive record this season.

So, while Leicester’s 1-0 win over Liverpool shouldn’t be viewed as a Rodgers masterclass (it wasn’t), it did demonstrate that there’s still life in the Foxes’ campaign.

Although Rodgers remains under pressure, he could yet turn 2021/22 around at the King Power. Better injury luck and finding a system that allows his team to control extended passages of play will, however, be vital. Whether either of those things falls into place remains to be seen.