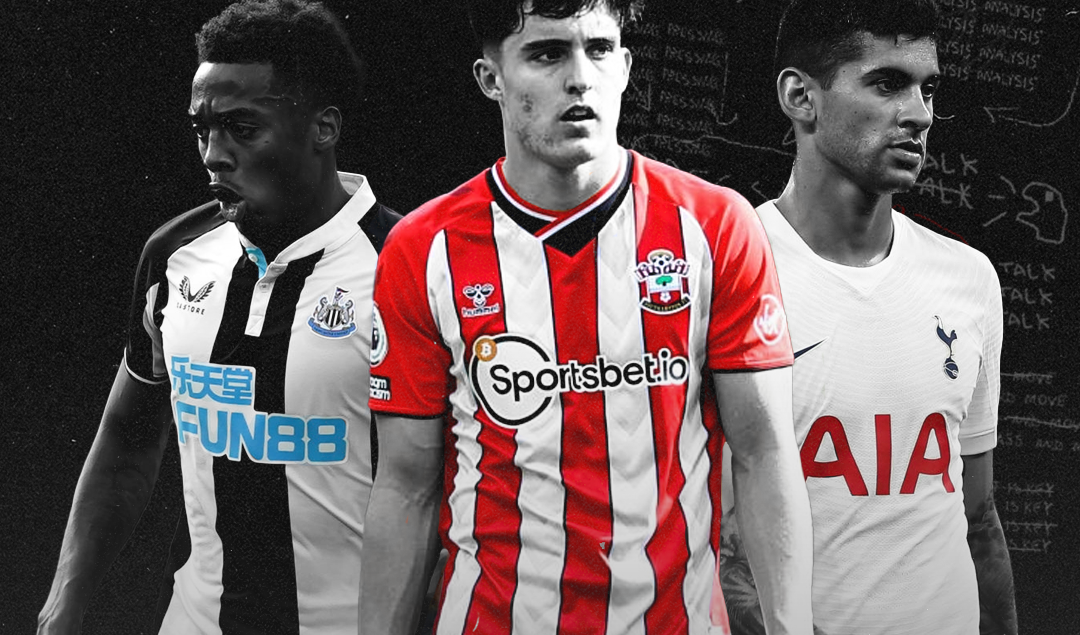 Now that the summer transfer window is shut, we can get back to strictly the business of football on the pitch. With that in mind, who was the key summer signing for each Premier League club? Before starting, a few variables were considered when choosing these picks: the price paid for the player, the age of the player, and the importance of the player’s position on the team’s overall performance.

Despite spending over £130m, Arsenal haven’t signed anyone with considerable experience at the highest level. No signing was older than 23, but it is one of the younger players, Albert Sambi Lokonga that looks to be the best bit of business.

At just £15m, the former Anderlecht captain has added progressive passing and ball-carrying to Arsenal’s laborious midfield. His impressive start to the season should see the Belgian nail down a starting spot alongside Thomas Partey.

Replacing Jack Grealish was always going to be an impossible task for Aston Villa. However, the acquisition of Emiliano Buendia should at least go some way to filling the void. Although not a-like-for-like, Buendia will bear the creative fulcrum for Aston Villa.

Last season he created the most chances in the Championship and managed 31 goal involvements in 39 games. Unlike some of Aston Villa’s other signings, Buendia is yet to hit his peak, as he’ll look to increase his performance level in the Midlands.

Whilst Brentford didn’t break the bank this summer they still managed to make smart investments. Most notably Kristoff Ajer who has arrived from Celtic and Frank Onyeka from Midtjylland. Onyeka’s ability to add bite and tenacity to Brentford’s midfield, whilst also having the ability to carry the ball up the pitch will be key if ‘The Bees’ are to survive this season. Still, at only 23, Onyeka should improve, as his profile is that of a typical Premier League midfielder.

The sale of Ben White for £50m has allowed Brighton to recruit a series of youngsters and still make a profit. Marc Cucurella’s enthusiasm will undoubtedly make him a fan’s favourite. But, our choice is Enock Mwepu. The Zambian has Champions League experience from his time at RB Salzburg, and more importantly, the midfielder will add some much needed goals to Brighton’s midfield.

He scored 11 goals in 81 league games for his former club. As well as this, Mwepu performed 3.7 shot-creating actions per 90. Still just 23, Mwepu should evolve into the perfect accomplice for Yves Bissouma in the Brighton midfield.

For the most part, Burnley have been typically stringent in the transfer market. The most eye-catching move is their record-breaking acquisition of Maxwel Cornet from Lyon. However, with Charlie Taylor and Dwight McNeil already occupying positions on the left he may find most of his appearances come off the bench.

Instead, Conor Roberts should slot into Burnley’s starting team at right-back. As a tenacious, hard-working player he fits Burnely’s philosophy, although he’s used to playing in a back-five, which may lead to an adaptation period. But at just over £2m, Roberts’ value should only increase.

Of course, it’s the Belgian forward. Romelu Lukaku fired Inter to the Scudetto last season, with 24 goals. Chelsea’s top scorer last season was Jorginho with 7. Thomas Tuchel has made Chelsea a well-drilled unit, but now with the added pace, power and link-up play of Lukaku, the Blues will become a more complete force.

Despite the obvious upsides, paying over £100m for a 28-year-old who the club sold for £28m 7 years earlier doesn’t seem like the most sustainable transfer strategy. Although sustainability isn’t something that Chelsea promote.

Crystal Palace have been the most active team this window. Up to 6 players have come in who can expect to start this season. Whilst there is a promising batch of young players joining the club, Will Hughes may be the most important to provide ‘The Eagles’ some stability. With Patrick Vieira keen to have players comfortable on the ball, Hughes can add some control, and experience to the team of new recruits.

Unlike last year, Everton have been more discrete with their summer purchases – spending just £1.8m in total. Demarai Gray was the youngest recruit, still just 25, who has failed to live up to the early promise around his name at Birmingham.

His arrival upon Merseyside wasn’t met with much optimism for this reason. But a youthful energetic winger is what Everton have been crying out for after the disappointing spells of Theo Walcott and Bernard. Gray has showcased his talent, scoring twice in Everton’s first three league matches.

The additions of Junior Firpo and Daniel James should help Leeds consolidate themselves as a Premier League team. But, it is a player that was already at the club last season who has been the most valuable purchase.

Jack Harrison has now joined permanently from Manchester City for £11.5m. He finished last season with 16 goal involvements, second only to Patrick Bamford. He’s shown himself to be a willing, direct runner with the ball, with a keen eye for goal. This season again, the 24-year-old will hold the creative responsibility for Leeds along with the effervescent Raphinha.

Quietly, Leicester may have had the most productive transfer window. The arrivals of Patson Daka, Boubakary Soumare, Jannik Vestergaard and Ryan Bertrand add both quality and depth. Yet, the loan signing of Ademola Lookman may have the greatest impact on Leicester’s season.

Harvey Barnes has excelled on the left, but there is still a question mark over the right-side of Leicester’s midfield, with Ayoze Perez only impressing in cameos. Lookman totaled the most goal involvements last season for Fulham. Lookman ranked 12th in the Premier League for carries into the penalty area, Leicester will be hoping for more direct ball-carrying this season.

Without any other genuine options, it has to be Ibrahima Konate, who was signed from RB Leipzig. The 22-year-old centre-back will provide excellent cover as he settles into life in England. At 6’4 he is excellent in the air, and his ability on the ball allows the Frenchman to carry the ball out of defense confidently. He still has work to do to usurp Joel Matip into Liverpool’s first team, but considering Liverpool’s defensive ailments last season, securing one of Europe’s top young centre-backs is a smart move.

Like Liverpool, Man City only signed one player. But the addition of Jack Grealish was arguably the most noteworthy of the summer. 16 goals and assists, as well as 14 big chances created last season will add to Man City’s already creative midfield. Despite the obvious quality, the question is whether Pep Guardiola’s signing offers something different to transform the club into Champions League winners.

City’s neighbours had the most glamorous window of anyone in the league. Most notably, Cristiano Ronaldo’s return to Old Trafford. Meanwhile, Jadon Sancho will add additional wide options to one of the Premier League’s best attacks. Still, questions remain over whether the capture of Ronaldo may stifle United’s transformation.

Sancho’s quality is unquestionable, although the recent form of Mason Greenwood means for now that the singing isn’t vital to United’s plans. Instead, Raphael Varane could be the missing piece to propel Man United to the league. Harry Maguire and Victor Lindelof have impressed as a pair but never convinced. The assurance and experience of Varane should lead to a steely partnership with Maguire.

Newcastle had a typically quiet window. The one notable addition is Joe Willock from Arsenal. Willock’s goals in 7 consecutive matches last season saved Newcastle from a relegation dogfight. Steve Bruce will hope that the signing can add goals to an, at times, pedestrian attack. Willock’s ability to drive from midfield will reinvigorate how Newcastle can attack. Even still, the fans would have preferred to see a few more new faces.

Norwich have tried to plug the void left by Emiliano Buendia with additions throughout the team. Pierre Lees Melou and Milot Rashica will be the main players tasked with this. American Josh Sargent, despite only being 21, has the responsibility to score goals for Norwich.

He scored 15 goals in 83 appearances for Werder Bremen, but Norwich are confident that the American has the physical capabilities to succeed in the Premier League. Sargent will have to score more regularly, but at such a young age he’ll likely have a greater sell-on value.

Southampton’s transfer strategy has clearly been focused around bringing in young talent. Adam Armstrong will hope to fill Danny Ings’ boots. Their two new full-backs offer the greatest signs of encouragement for the future. Thierry Small, signed from Everton has been tipped to become a brilliant left-back.

On the right, Valentino Livramento, signed from Chelsea looks to already be a key component of Southampton’s defence, and still only at 18. The 18-year-old has been the Saints’ player in the early weeks of the season, so much so that Kyle Walker-Peters has only been able to re-enter the team via the left-back position. If Livramento continues at this trajectory he will join England’s crop of extremely talented right-backs, and all just for £5m.

Harry Kane’s future dominated Tottenham’s transfer window, but the club still strengthened their side, whilst adding a more youthful tone to the squad. Bryan Gil and Emerson Royal seem like astute upgrades on Lamela and Aurier. With the loss of Toby Alderweireld, the capture of Cristian Romero should provide Spurs with one of the league’s best centre-backs for years to come.

An all-encompassing centre-back that was in the 99th percentile for pressures, tackles and interceptions. Romero was also a creative force from defence, producing 0.88 shot creating actions per 90. Even though he’s 23, it appears that he is close to being the full-package for a centre-back.

Watford had a usually chaotic window, this was no different. Choosing one from 11 incomings isn’t easy. However, the addition of Imran Louza is promising. He scored 7 and assisted 3 for Nantes in Ligue 1 last season. With the departure of Will Hughes, as well as a new-look front-line, Watford will be relying on Louza to provide tempo and assuredness in midfield, whilst still chipping in with goals. At 22, it’s unknown whether the task will be too great for Louza and Watford, but he’s certainly a player that will grow into his role.

West Ham have been incredibly smart with their business. Alphonse Areola provides fine competition to Lukasz Fabianksi, Nikola Vlasic should fill in the good work done by Jesse Lingard last season, and Alex Kral will add additional steel to the central midfield. But, Kurt Zouma looks to be their greatest purchase. £31m is a steep price, but at 26 and with bundles of domestic and European experience he will slot straight into a solid defensive partnership with Angelo Ogbonna.

He fits into the West Ham frame of being dominant in the air, winning 4.21 headers per 90 last season, but with the added touch of passing excellence. Zouma attempted 77 passes last season, with a success rate of near 90%. Granted he was in a Chelsea team, playing a back three, who gave licence to their centre-backs on the ball. Even still, his addition will benefit West Ham defensively and in building from the back.

With concerns over whether Raul Jimenez can return to his form prior to his horrific head injury, Wolves needed to acquire sufficient back-up. That came in the form of Hwang Hee-Chan on a loan deal. Hwang struggled last season for RB Leipzig, scoring just 3 Bundesliga goals, but his form at RB Salzburg has given Wolves enough encouragement that the Korean can be a success.

In the 2019/20 season, Hwang managed 23 goal involvements in 27 games. His pace can provide a different option to Jimenez. Still, only 25, there’s hope that a fruitful loan spell could lead to a permanent deal next season.