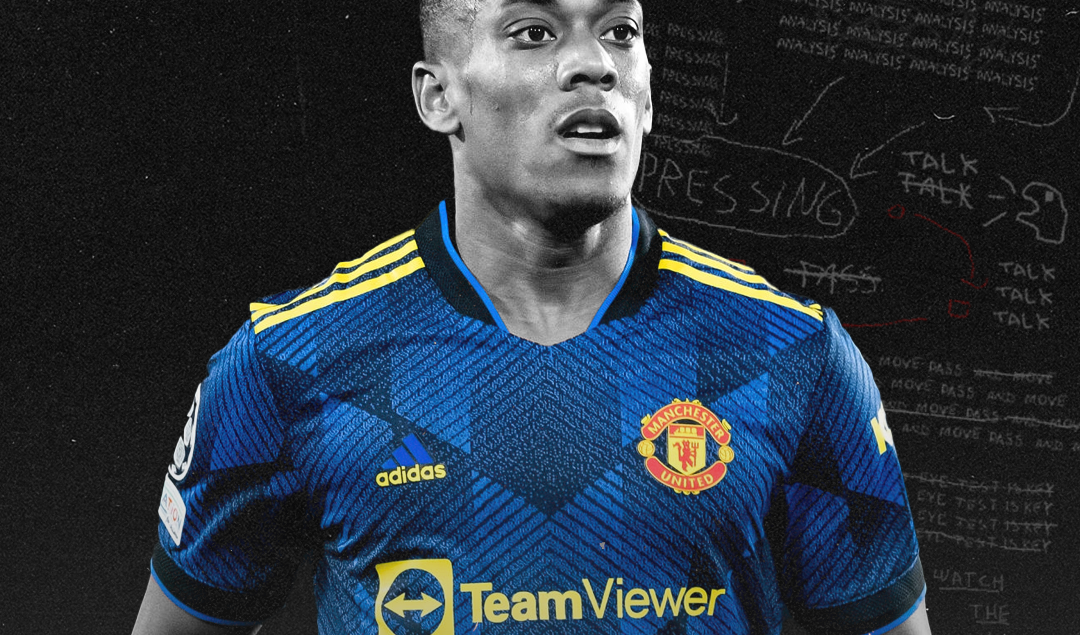 Anthony Martial burst onto the scene on his debut for Manchester United in September 2015. Moments after Christian Benteke scored a sensational overhead kick to get a goal back for Liverpool, Martial found himself in space on the left-wing.

Turning Martin Škrtel inside out, Martial drove into the box and slotted the ball past Simon Mignolet with an unerring side-footed finish reminiscent of Thierry Henry. United fans inside Old Trafford that day rose to their feet to salute the Red Devils new hero. A new star was born, one which would terrify Premier League defences for years to come.

Or so everyone thought.

Six years on from that magical debut, it’s hard to argue with the notion that Martial has never quite reached those heights again. With just 5 goals in his last 29 Premier League appearances and having fallen behind Cristiano Ronaldo, Mason Greenwood and Edinson Cavani in United’s attacking pecking order, the end appears to be nigh for Martial’s Manchester United career.

In the summer of 2015, Manchester United spent a reported £36 million on the 19-year old, a world-record fee for a teenager at the time. Documents leaked in the following years suggested that the deal could wind up costing United over £60 million, should certain criteria be met.

And while people scoff at the infamous ‘Ballon d’Or nomination’ clause in the contract, far more attainable criteria, such as making over 25 appearances for the French National team, have since come to pass and seen the fee rise to well over £50 million.

In patches, Martial has shown the precocious talent that he possesses. Some of the goals he has scored down through the years have been simply breathtaking.

His solo goal against Fulham at Craven Cottage where he ran half the pitch before scoring, his FA Cup semi-final strike against Everton and the excellent header he scored at Stamford Bridge in February 2020 are all examples of the undeniable talent that he possesses.

Talent has never been an issue for Martial, but consistency has.

Martial’s career at Manchester United has been a series of ups and downs. In his first season in 2015/16, he lit up Old Trafford. Alternating between left wing and striker, Martial tore defences apart and as a teenager, was one of the few bright sparks in an otherwise dour second season for Louis Van Gaal.

Victory in the FA Cup did little to save United’s season from being a disappointment, with the Dutchman being replaced by José Mourinho shortly after the aforementioned FA Cup final win.

Under Mourinho, Martial experienced his first real dip in form in Manchester. The 2016/17 season saw Martial deployed mainly on the left wing, with much of his appearances coming from the bench.

José never seemed to truly trust Martial, with the Frenchman producing arguably the worst football of his career for Mourinho. While Martial’s form did drop off a cliff for much of the Mourinho era, to put all of this blame solely on Martial would be extremely unfair.

The Mourinho era coincided with the beginning of the ‘Celebrity Era’ at Manchester United. Around this time, United became obsessed with social media engagement, Instagram likes, Twitter followers and above all else, money. Players arriving at United were being bought for reasons that had nothing to do with football.

Why else would Mourinho, a man badly burned by how things ended at his previous two clubs be handed the keys to the kingdom? Why else would a 34-year-old Zlatan Ibrahimovic be brought in to lead the line as United’s number 9? And why else would the club purchase Paul Pogba for a world-record transfer fee of £88 million, four years after letting him leave for free and with no clear idea of how to utilise him?

The stagnation in Martial’s development can be traced all the way back to the summer of 2016. Ibrahimovic’s arrival ensured that Martial would receive much less game time in his favoured position as a central striker. Furthermore, Martial’s number nine shirt was being handed to a man 14 years his elder.

And while the Swede had a good season at United, it is difficult to look back and understand the logic as to why Martial was essentially replaced by a 34-year-old striker who’d spent years dominating Ligue 1 with PSG and was clearly past his best. Except for the fact that he was more famous and would sell more shirts.

Indeed, this was perhaps one of the first real signs of the ineptitude that exists to this day at Manchester United board level. With regards to recruitment, this period, 2015-2018, was an all-time low for the club. Angel Di Maria spent a season at the club before being moved on a cut-price a year later.

Bastian Schweinsteiger, Daley Blind and Memphis Depay never nailed down a position in a matchday squad let alone the starting eleven. And the less said about Alexis Sanchez’s ill-fated spell at the club the better.

Martial was actually one of the few signings in this era that made any sense in terms of looking towards the future. Despite this, he was forced to play second fiddle to an ageing cast of stars around him.

Marcus Rashford’s rapid ascension to the United first team also helped to curtail Martial’s development. From the moment Rashford scored twice on his debut against FC Midtjylland and followed it up with another two against Arsenal a few days later, he was destined to be a darling of the Stretford End.

Marcus Rashford 20/21: On The Upward Trajectory

Rashford and Martial are quite similar players. Both are tricky wide forwards comfortable playing on the wing or up front. Additionally, each player has electric pace and an eye for goal. Indeed, even their numbers over the years have been strikingly similar.

This, combined with United’s culture of bringing through young, local talent, ensured that United fans want to see Rashford, and indeed Jesse Lingard who also broke into the first team that season, succeed. The fact that Rashford was a youth player and didn’t arrive at the club with a massive transfer fee, meant that expectations were lower and so too was the pressure.

Martial on the other hand had none of these luxuries. With a big price tag comes big expectations. And while the Frenchman met these expectations in his first season, the next three seasons that followed were underwhelming in the extreme.

Under Ole Gunnar Solskjaer, Martial experienced a remarkable uptick in form. Shortly after Ole’s arrival, Martial was handed a lucrative 5-year contract. When Romelu Lukaku departed for Inter Milan, the number 9 shirt was returned to Martial, three years after he had been deemed unworthy of the honour.

Finally, Martial had a manager who believed in him. Martial was entrusted by the Norwegian to be United’s main man. The 2019/20 season was by far the best of Anthony Martial’s Manchester United career.

With 23 goals and 9 assists in all competitions, Martial formed a formidable partnership with Marcus Rashford as United’s counter-attacking prowess propelled them to finish in third place in the Premier League. Finally feeling the trust of his manager, Martial seemed destined to finally fulfil his potential and become a world-class striker.

Unfortunately, the 2019/20 season has proven to be the zenith of Martial’s career to this point. A favourite of Solskjaer’s, Martial was given plenty of opportunities last season to further cement his place as United’s number one striker.

The signing of Edinson Cavani was meant to provide an opportunity for United to rest Martial at certain times during the season, while Martial would also get the opportunity to pick the brain and learn from one of the best strikers of his generation.

Instead, when Cavani was finally given the chance in the second half of the season to stake his claim for a regular starting role, he grabbed it with both hands usurping Martial.

Martial can point to the similarities between Ronaldo and Cavani’s arrivals with Ibrahimovic’s all those years ago and bemoan the fact that he has been passed over for older strikers.

However, the fact of the matter is that this situation and the Zlatan situation are completely different. While Ibrahimovic was signed for his name power, Cavani was a last-minute signing by a United side desperate for another attacking player.

Furthermore, Martial was given plenty of opportunities to prove himself better than Cavani, none of which he took. Additionally, Ronaldo’s goals have single-handedly stopped this season from being a complete bust.

Perhaps the most damning indictment of Martial is his work rate compared to Cavani’s. The 34 year-old is an image of perpetual motion, constantly buzzing around defenders looking to pick up scraps. In the box, Cavani is as deadly as they come, with the kind of instinctive movement that only comes from years of honing his craft.

In contrast, an accusation often labelled at Martial is that he doesn’t work hard enough, both in an offensive and defensive sense. Off the ball, Martial rarely tackles defenders or even gets close enough to put any kind of pressure on the opposition.

Things don’t change much when United are in possession, with  Martial often looking disinterested and quite frankly bored. When he came on against Watford a few weeks ago, in what proved to be Solskjaer’s final game, he was unable to control almost every ball that was played into him.

It was Martial’s poor control that gave Watford back possession for João Pedro’s goal to make it 3-1 to the Hornets. The irony of Martial inadvertently putting the final nail in the coffin of the only United manager to show faith in him was plain for all to see.

The End of the Road

Martial’s agent came out a few days ago indicating that Martial wishes to leave Manchester United in January. When this topic was broached with interim manager Ralf Rangnick, the German revealed that he had yet to speak to his striker. With Rangnick set to take a hardline stance on players who want out of the club, Martial’s days appear to be numbered.

At only 25, there is plenty of time left for Martial to fulfil his potential. There is no doubting the Frenchman’s talent, but questions remain over his attitude and work-rate. Perhaps a move back to France or a transfer to a club like Everton or West Ham may be on the cards for Martial.

With rumours flying around that Martial is set to become the first big signing of the Saudi Regime at Newcastle United, maybe Tyneside is where Martial will ply his trade next. Whether Eddie Howe sees Martial as the man to fire Newcastle away from the dropzone, however, remains to be seen.