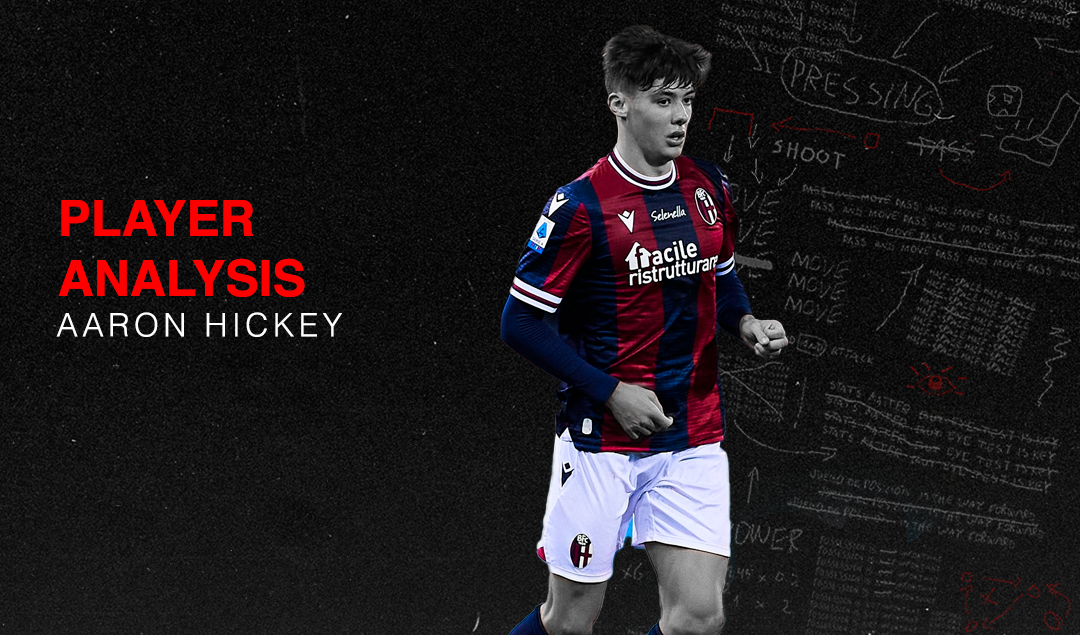 Aaron Hickey’s wonder strike against Sassuolo made the masses stand up and notice the Scotsman, his performances for Bologna impressive after swapping Edinburgh for Northern Italy.

Starting off in Celtic’s youth system before being discarded for Hearts – Hickey favouring first team opportunities over sticking with the Scottish giants – it looks as if Hickey’s determination to pave his own way is paying off. Rumoured with Aston Villa and AC Milan, Sinisa Mihajlovic will be desperate to keep hold of his young, expansive wing-back in Serie A.

Hickey’s roots originate in Scotland, starting off with Hearts before a spell with the Celtic Academy still as a youth player. A number of years in the youth fold at Celtic didn’t see him stick around at Parkhead, opting for a return to The Jam Tarts in 2019.

Aaron Hickey’s insistence on returning to Tynecastle was the correct move, not even his Glaswegian heritage would keep him at Celtic. On his return to Hearts, first-team football would come calling.

Billy Gilmour’s Rise to Stardom for Scotland and Chelsea

Operating as an attacking left-back, his assuredness with both feet is a key attribute to the now 19-year-old’s game. Praised for his intelligence on the ball for his age within the Hearts set-up, alongside a maturity beyond his years, it was no surprise to see Hickey named in line-ups still as a teenager for The Jam Tarts.

He would make his Hearts debut near the close of the 18-19 season in the SPL, substituted on against Aberdeen. He would also feature in Hearts’ Scottish Cup Final against Celtic that same season, Hearts narrowly losing out to the club Hickey had a stint with as a youth player.

Hickey’s attacking game has gained him many plaudits in Serie A, matching the goal output of Paolo Dybala so far this campaign, but Hickey would only get one solitary goal in his time with Heart of Midlothian.

That solitary goal, however, would come in the Edinburgh Derby – Hickey’s effort winning the contest in the final few minutes. A deflection for the winner was rather fortuitous, but Hickey’s eagerness to run up the pitch into space to hit the late winner in from distance deserved a bit of fortune to guide it into the net.

Still very clearly a boy learning his trade, the joy on Hickey’s face when the winner deflected in was a taster of things to come for the Glasgow born wing-back.

As is the case for most exciting young talents, his employers will try and bat away any club trying to gain their youngster’s services. The likes of Bayern Munich and Aston Villa circled for the teenager, with ex-club Celtic also actively pursuing.

An outlier came in the form of Bologna, not quite as grand as the likes of The Bavarians enquiring. Yet, in September 2020, Bologna would sign the young Scotsman. Unfazed by the attention of Bayern Munich and other footballing giants, Hickey’s reasons for moving to Bologna again showcases his maturity.

He could well join a huge club and be swallowed by it all, not fitting in with an extortionate wage he isn’t used to. Instead, captivated by the feel of Bologna and what Serie A could offer, Hickey dived into the unknown leaving Scotland behind for Serie A mainstays Bologna.

The wing-back has made quite the splash in Italian football since his arrival, a football culture that takes to expansive wing-backs with open arms. His versatility has also seen him feature centrally for Mihajlovic’s men, playing in the middle of the park against Juventus recently.

This ability to transition into the centre of the park could well draw direct comparisons to the likes of Joshua Kimmich, the German interchangeable between defence and midfield. Such lofty comparisons aren’t made in jest, now a star for his new Northern Italian team.

Hickey’s goal-scoring ability down the flanks has made him very useful to his employers, not one for scoring a scrappy effort. A low piledriver against Genoa sticks out, alongside an effort finding its way in against Lazio despite Lazzari trying to match the Scotsman’s tenacity – a fierce strike eventually bundled in.

This goal-scoring streak will please his Serbian manager, Mihajlovic’s playing career dominated by audacious goals even when utilised as a defensive option. Hickey has praised his Bologna boss in interviews, the perfect manager for Hickey to express himself fully under.

His attacking style of play is also seen in Hickey’s constant aggression, a constant desire to chase after the ball and advance The Red and Blues further up the field. In moments of immense pressure on the ball, Bologna’s number 3 is aggressive in inserting himself into the battle but also calm in playing his fellow teammates into space.

Often, aggression and tenacity isn’t matched by a calmness on the ball but Hickey’s game is extremely well-rounded for a player just shy of 20. A defensive steel to his game also demands he’s played as a full-back option, blocking balls into the box and challenging to start a Bologna counter-attack.

Hickey’s strengths lie in retrieving the ball with a last-ditch challenge, before executing a new attack with skill. His wonder-strike against Sassuolo stole the headlines, an arrowed shot leaving Gianluca Pegolo rooted to his spot, but Bologna’s clean sheet in that match was also indicative of Hickey’s defensive work.

The former Hearts full-back has come on leaps and bounds leaving Scotland behind to a degree, an untrodden path with a lack of British players making that swap to Europe. Another example that sticks out is Ryan Gauld, who played for a number of Portuguese clubs after breaking through at Dundee United as a youngster.

Bologna’s number 3 is arguably Scotland’s most successful export in recent memory, nominated for the Golden Boy award in 2021. Links back to British soil have emerged, Aston Villa again rumoured in acquiring for his services with former SPL manager Steven Gerrard a fan.

In a division heavily saturated by the prominence of the attacking full-back, Hickey wouldn’t look out of place. But, for a player who chose Bologna for its welcoming feel, I would imagine the Scottish wing-back will stick in Northern Italy this transfer window.

If he continues at his current pace, expect a bidding war for Hickey in the summer with the expansive wing-back one of the hottest talents in Europe today.